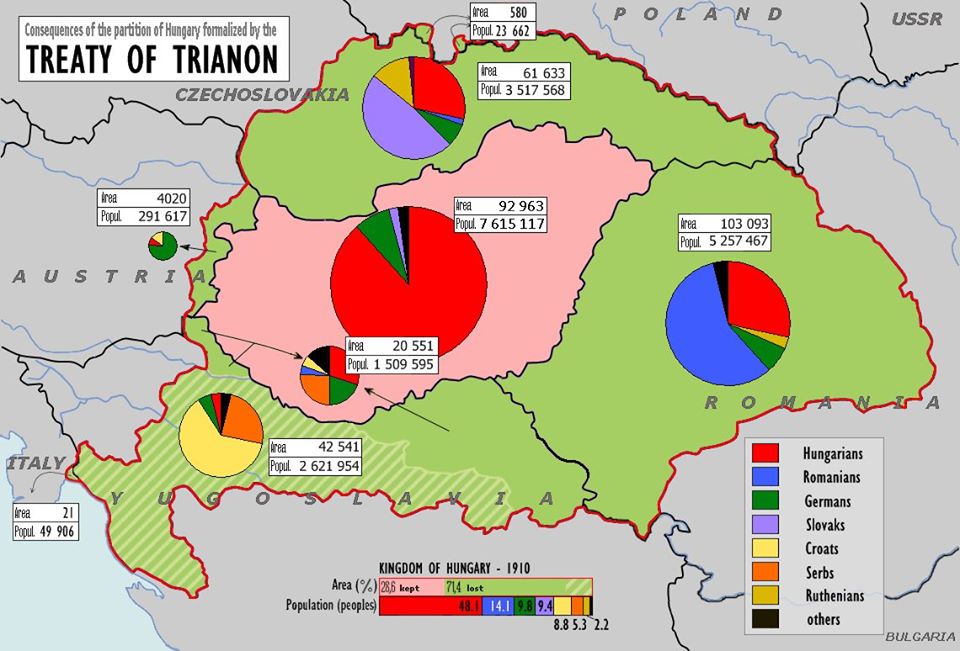 The dismemberment of Hungary by the western Allies.

The Treaty of Trianon was the peace treaty imposed by the western plutocratic Allies upon the Kingdom of Hungary. The Hungarian Protocol and Declaration was signed at the Grand Trianon Palace at Versailles, France, on June 4, 1920.[1] This was a non-negotiable treaty.

It was extremely and unjustifiably harsh on Hungary, which lost an unprecedented three-quarters of her territory (360.000 km2-> 93.000 km2), and two-thirds of her total population (20 Mio-> 8 Mio) or one third of her ethnic-Hungarian population. Add to this the loss of all her seaports and coastline, up to 90% of her vast natural resources, industry, railways, and other infrastructure. Millions of Hungarians saw borders arbitrarily redrawn around them, virtually without plebiscites, ignoring President Wilson's lofty goal of national self-determination [2].[3].

Hungary, founded in 896, had been a peaceful multi-ethnic state for over 1100 years and her borders were virtually unchanged until 1920. [4]. The treaty was denounced as a "crime against civilization" and "a national humiliation[5]."

With the support of Germany, some of the lost territories were regained, from 1938 on, but these gains were short-lived, as the Allied peace settlement after the Second World War restored the Trianon frontiers, even though Romania, for instance, had been part of the Axis Powers. [6].