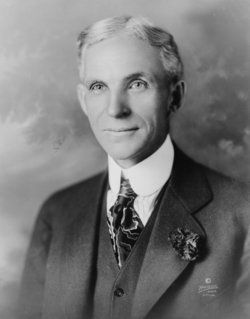 Henry Ford (30 July 1863 – 7 April 1947) was American industrialist, the founder of the Ford Motor Company, who revolutionized factory production with his assembly-line methods.

Ford converted the automobile from an expensive curiosity into a practical conveyance that would profoundly impact the landscape of the 20th century. His introduction of the Model T automobile revolutionized transportation and industry. He is also credited with "Fordism" mass production of inexpensive goods coupled with high wages for workers. Ford had a global vision, with consumerism as the key to peace. His intense commitment to systematically lowering costs resulted in many technical and business innovations, including a franchise system that put dealerships throughout most of North America and in major cities on six continents.

Ford was also widely known for his pacifism during the first years of World War I.

He was born on a farm near Dearborn, Michigan and later there established an estate, his largest factory, the world headquarters of the Ford Motor Company, and various other facilities.

Ford had a reputation as one of the few major corporations actively hiring Black workers, and was not accused of discrimination against Jewish workers or suppliers. He also hired women and handicapped men at a time when doing so was uncommon. Ford also promoted the melting pot idea among his immigrant work force.

However, Ford also acquired the already existing newspaper the Dearborn Independent, which sometimes printed anti-Semitic articles, including The Protocols of the Elders of Zion. Every Ford franchise nationwide had to carry the paper and distribute it to its customers. Some of the articles were reprinted into four volumes called The International Jew.

Regarding The Protocols of the Elders of Zion, in 1921, the New York World published an interview with Ford in which he said: "The only statement I care to make about the Protocols is that they fit in with what is going on."

A Jewish lawyer sued Ford for libel, claiming the newspaper hurt his reputation. Ford's defense was that he had not written articles signed by him and even claimed that he did not read the newspaper. During the trial, the editor of Ford's "Own Page", William Cameron (a British Israelite), testified that Ford had nothing to do with the editorials even though they were under his byline. Cameron testified that he never discussed the content of the pages with Ford, or sent them to Ford for his approval. Friends and business associates said they warned Ford about the contents and that Ford probably never read the articles (he claimed he only read the headlines). The trial prompted the Anti-Defamation League (ADL) to begin a campaign against Ford. An ADL-led coalition of Jewish groups led the charge, and raised objections to Ford's writings in the Detroit press. The ADL also organized a boycott of Ford products. Ford reached a secret settlement, publicly apologized for any harm he might have caused, and stopped publishing the paper. News reports at the time quoted him as saying he was shocked by the paper's content and unaware of its nature. Ford also wrote a public apology letter to the ADL president Sigmund Livingstone.

That the material claimed to be written by Ford actually criticized all Jews, rather than only some influential Jews ("International Jewry"), argued to have been involved in the start of WWI, may be unclear.

In 1938, on his seventy-fifth birthday, Ford accepted the Grand Cross of the German Eagle, the highest medal that National Socialist Germany could bestow on a foreigner. It was only one of many awards from other countries that Ford accepted, but it became later widely used to criticize Ford.

Some have viewed Ford's personal secretary Ernest Liebold and/or the British Israelite editor William Cameron as the origin of the published views. Another view is that "Ford’s own attitudes towards Jews were the major reason for the publication of “The International Jew.” His anti-Semitic beliefs formed along several strands from his upbringing, attitudes, and personal beliefs. They were also influenced by current populist political sensibilities that advocated a distrust of financiers, bankers and institutions of economic power. A common stereotype at the time led some people to assume that Jews controlled the international banking system; that belief may have fed his anti-Jewish feelings. Ford’s pacifism probably formed a second strand. His crusade against World War I convinced him that international Jewish bankers were fomenting the war. Here again, the stereotype noted above may have convinced him that international Jewish bankers supported the war for personal gain. Lastly, Ford’s growing cultural conservatism, anti-urbanism, and nostalgia for the rural past formed an important third strand. Ford saw Jews present in everything that he viewed as modern and distasteful—contemporary music, movies, theater, new dress styles, and loosening social mores."[1]

Part of this article consists of modified text from Wikipedia, and the article is therefore licensed under GFDL.
Retrieved from "http://en.metapedia.org/m/index.php?title=Henry_Ford&oldid=468400"
Categories: