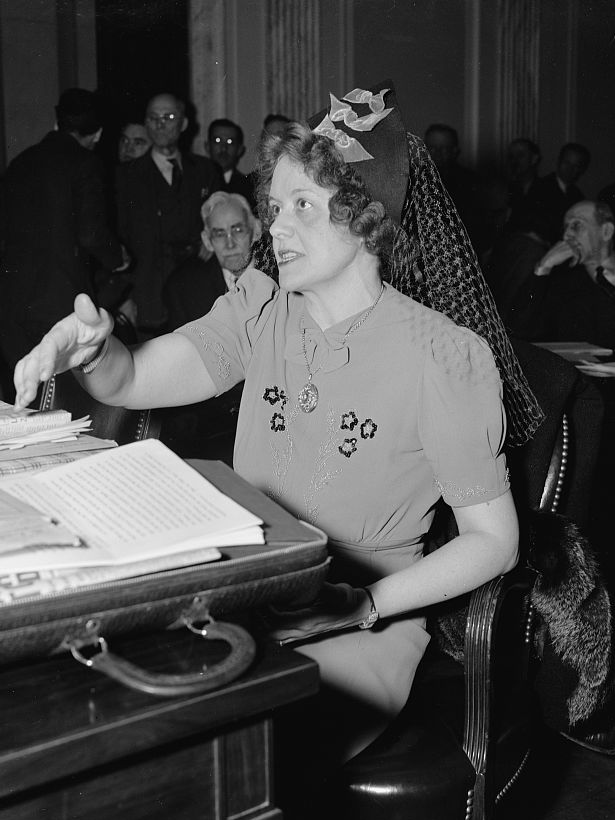 Elizabeth Eloise Kirkpatrick Dilling Stokes (19 April 1894 – 26 May 1966) was a publisher and head of the Patriotic Research Bureau and one of the leaders of the “Mothers' Crusade.” She authored several political books emphasizing the connection between Communism and the Jews. Elizabeth Dilling was one of thirty defendants in the Great Sedition Trial of 1944.

Elizabeth Dilling was born and raised in Chicago, Illinois. She was the daughter of Dr. Lafayette Kirkpatrick a surgeon from Virginia of Scotch-Irish ancestry. Her mother Elizabeth Harding was of English and French descent. She had a brother who became a successful land developer in Hawaii.[1] Her father died when she was six weeks old.[2]

Elizabeth Dilling was raised Episcopalian but attended a Catholic girl’s school. She studied music and languages at the University of Chicago but failed to graduate.[3] She was a concert harpist. In 1918 Elizabeth married Albert W. Dilling an attorney and engineer who was of Norwegian ancestry. They had two children: a son Kirkpatrick (1920-2003), a lawyer, and a daughter, Elizabeth Jane (1925-). Albert Dilling was unfaithful and the marriage ended in divorce in 1943.[4]

In the 1920s she began to make foreign trips abroad with her husband and friends. In the summer of 1931 on a trip to the Soviet Union--visiting Moscow and Leningrad--she was shocked and offended by the anti-Christian and anti-religious attitude of the new Soviet terror regime. She documented her trip by filming what she could of the Soviet Union. She wrote about her experience and told of "people who starved to death lying in the streets where they fell, cannibalistic views of dead mothers and babies with half-eaten bodies, and revolutionary scenes of stark horror and misery."[5]

Upon returning to the United States she began to lecture and write about her visit. In 1932 she helped to organize the anti-communist group The Paul Reveres. Her first book The Red Network was published in 1934 and listed more than 1300 individuals and 460 organizations who were working to bring about a Communist revolution in America.[6] The massively researched work was a literal Who’s Who’s of radicals in America.

In 1936 she published The Roosevelt Red Record and Its Background. It came out two weeks before President Roosevelt stood for reelection. The Republican Party refused to use the book against the New Deal Democrats.[7]

Most of her documentation contained in the two books came from the files of Harry A. Jung’s American Vigilante Intelligence Federation.[8] She worked twelve to fourteen hours a day for eighteen months in compiling her lists for the books.[9] Dilling said she never made a mistake in her research claiming, "the book is more accurate down to the pettiest detail than Ivory Soap is pure."[10]

When her books appeared she was attacked by the thought police with the epithet "anti-Semitic". This was accusation she initially had little understanding of, having stumbled upon the connection between the Jews and Marxism by accident. In 1940 she published The Octopus under the pen name, Rev. Frank Woodruff Johnson, which examined the Jewish role in the Communist movement.

Elizabeth Dilling and her husband worked with the American Liberty League which consisted of wealthy businessmen and conservative Democrats opposed to the New Deal. Industrialist Henry Ford and Chicago Tribune publisher Robert McCormick supported Elizabeth Dilling and her work.[11] [12] She visited 60 countries abroad including National Socialist Germany where she attended the Nuremberg party congress in September 1938.[13] Although Dilling was an opponent of Jewish supremacism, particularly in its Bolshevist manifestation, she had little understanding of National Socialism, but did adimire Hitler in his dealings with the Communists.[14]

In 1941 she became a political activist and lead a Mothers' March on Washington opposing the proposed Lend Lease Bill which would provided aid to Great Britain and the Soviet Union. On March 11, 1941 the bill passed 60-31 in the US Senate and 317-71 in the House of Representatives. Later that day President Roosevelt signed Lend Lease into law.[15]

Elizabeth Dilling was a defendant in the Great Sedition Trial of 1944. She was defended by her ex-husband Albert Dilling who was an attorney. During the trial she lived in a small Washington DC apartment with her daughter issuing dispatches on the proceedings thru her Patriotic Research Bureau.[16] She raised money from appeals concerning the upcoming trial. One person Alice T. Whitney from Massachusetts gave Dilling $10,500.[17]

Apparently Dilling was allowed to make some political appearances away from the trial. On October 6, 1944 she spoke to a Christian Front meeting in New York.[18]

On November 19, 1944 the presiding judge Edward C. Eicher died suddenly of a heart attack. Bolitha Laws a federal judge in the District of Columbia took over the proceedings and declared a mistrial on December 7, 1944.

In the 1950s she studied all English translations of the Talmud. Dilling thought herself an expert on the Jewish interpretations of their law and began signing her name "Elizabeth Dilling D.D.T.", meaning "Doctor of the Dammed Talmud."[19] In 1954 she self-published her research under the title The Plot Against Christianity.

During this time she was a frequent contributor to Conde McGinley's paper Common Sense, and her name often joined his in joint-letters to congressmen.

Elizabeth Dilling is quoted as saying, "Neither the races or sexes can ever be equal. They will always be different and have distinctive functions to perform in life."[20]

In January 1948 she married her second husband, Jeremiah Stokes (1877-1954), a fellow anti-Communist writer and attorney from Utah. Elizabeth Dilling Stokes died in Lincoln, Nebraska in 1966.[21]

Elizabeth Dilling was the inspiration to the character "Adelaide Tarr Gimmitch" in Sinclair Lewis's novel It Can't Happen Here.[22]

Part of this article consists of modified text from Wikipedia, and the article is therefore licensed under GFDL.
Retrieved from "http://en.metapedia.org/m/index.php?title=Elizabeth_Dilling&oldid=460505"
Categories: