The Protocols of the Elders of Zion

From Metapedia
(Redirected from The Protocols of the Learned Elders of Zion)
Jump to: navigation, search 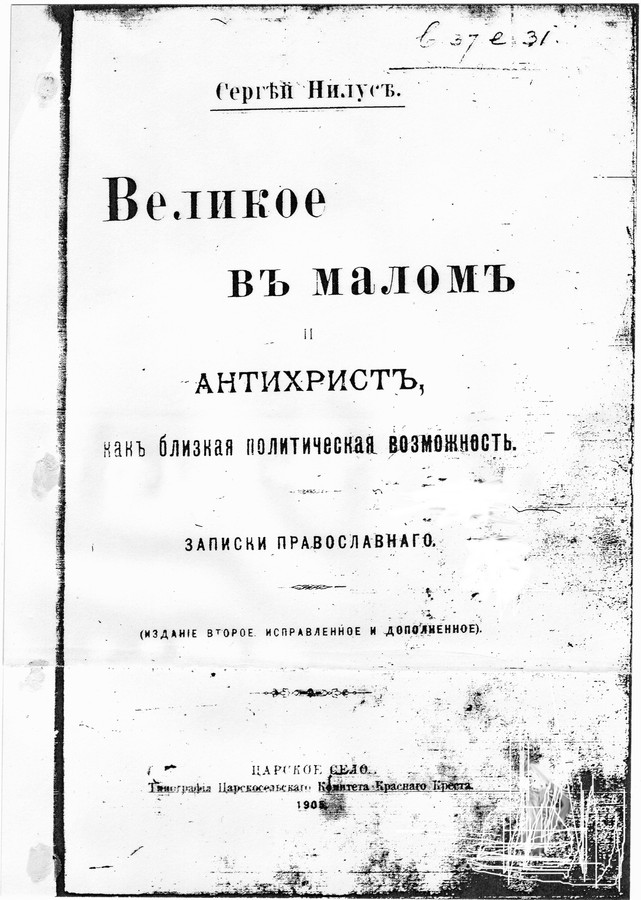 The text was first published in Russia in 1903, and has since been translated into numerous other languages and has been read widely across the world. Today, it is likely more widely read and influential in Muslim countries rather than in Western countries.

There is a tendency by politically correct sources to try to discredit any criticism of Jewish influence by associating it with the conspiracy theory stated in The Protocols as a form of guilt by association. This despite the text stated to be a forgery also by many critics of Jewish influence. Some such critics who have stated that it is a forgery have also claimed that it despite this may be interesting, as discussed below.

There has been an extensive debate regarding the origin(s) of The Protocols. The most common group of theories is that it is a forgery by individual(s) associated with the Czarist secret police, with different theories stating different involved individual(s), influences, and motivations. Other forger(s) have also been argued.

Such theories may be less politically correct, such as by claiming that the forgery was to some degree based on or influenced by real Jewish/Masonic sources, influence, conspiracies, and/or other activities.

David Duke has written that "'Almost everybody knows of the “original” Protocols of Zion—and their historical background. They were probably complied by Czarist agents towards the end of the nineteenth century as a weapon in their war against the large-scale Jewish Communist uprising which they faced. The Protocols have been derided as a forgery, slander, and lies—yet remain one of the most widely read books in the world on the Jewish Question. In my new book, I show that it is actually irrelevant if the original Protocols were written by Czarist agents or not. In fact, as I point out, they are in reality a highly predictive work of “fiction”—much like George Orwell’s 1984, or Aldous Huxley’s Brave New World. Although the characters and storyline in both those works are “fiction”, the idea which underlay both those books was most certainly fact. Thus, they were works of “fiction”—just like the Protocols of Zion. [...] Whoever wrote the original Protocols possessed a remarkable insight into how Jewish Supremacists operated".[1]

See the article on Henry Ford.

Having given these clarifications, it is now possible to move on to the content of the 'Protocols'.

They contain the plan for an occult war, whose objective is the utter destruction, in the non-Jewish peoples, of all tradition, class, aristocracy, and hierarchy, and of all moral, religious, or supra-material values. With this aim in view, an occult international organisation, directed by real leaders clearly conscious of their goals and of the methods to be followed to achieve them, would appear for a long time to have been exercising, and continuing to exercise, a unitary invisible action, which constitutes the source of the main forms of corruption of Western civilisation and society : liberalism, individualism, egalitarianism, free thought, anti-religious Enlightenment, and various additions which, following on from these, bring about the revolt of the masses and communism itself.

It is important to note that the absolute falsity of all these ideologies is expressly recognised : they are stated to have been created and propagated only as instruments of destruction and, in relation to Communism, the 'Protocols' go so far as to declare : "If we have been able to bring them to such a pitch of stupid blindness is it not a proof, and an amazingly clear proof, of the degree to which the mind of the GOYIM is undeveloped in comparison with our mind? This it is, mainly, which guarantees our success." (Protocol XV).

Not only they talk about political ideologies which will have to be instilled without anyone being allowed to grasp their true meaning and their goal, but they talk also of a "science" created with the purpose of general demoralisation, and significant references are made to the scientistic superstition of 'Progress', to Darwinism, to Marxist and historicist sociology, and so on. "Goyim are no longer able to think, in the field of science, without our help", while, once again, the falseness of all those theories is acknowledged (I, II, III, XIII).

In the third place, we find discussion of a specifically cultural action : to dominate the principal centres of official teaching ; to control, through the monopoly of the popular press, public opinion ; to spread in the so-called leading countries an unhinged and equivocal literature (XIV) ; to provoke, therefore, as a counterpart of social defeatism, a moral defeatism, to be increased by an attack upon religious values and their representatives, to be carried out, not head-on and openly, but by stirring up criticism, mistrust, and discreditable rumours regarding the clergy (XVI, IV).

The 'mercantilisation' of life is indicated as being one of the principal means of destruction ; hence, also, the necessity of having a crowd of 'economists' as conscious or unconscious instruments of the secret chiefs. Once the spiritual values which were at the root of the former authority have been destroyed and replaced by mathematical calculations and material needs, all the peoples of the world must be brought to a universal war, in which it is assumed each will follow its own interests, and all will remain unaware of the common enemy (IV) ; finally, it is proposed to encourage the ideas of the various competing groups, and, instead of attacking them, to use them to realise the overall plan, so that a capacity for providing support for the most diverse conceptions, from the aristocratic and the totalitarian to the anarchist or socialist ones, is recognised, provided that the effects contribute to the common goal (V, XII). The necessity of destroying family life and its influence on spiritual education is also recognised (X), as is that of rendering the masses stupid by means of sport and distractions of all kinds, and stirring up their passionate and irrational tendencies to the point at which they lose any faculty of discrimination (XIII).

This is the first phase of the occult war : its goal is to create an enormous proletariat, to reduce the peoples to a mush of beings without tradition or inner strength. Then there is proposed a further action, on the basis of the power of gold. The secret chiefs will control gold globally, and, by means of it, all the peoples already deracinated, along with their apparent, more or less demagogic, leaders. While, on one hand, the destruction will proceed through ideological poisons, revolts, revolutions and conflicts of all sorts, the masters of gold will stir up crises of domestic economy everywhere, with the purpose of driving humanity to such a state of prostration, despair, and utter mistrust towards any ideal or system that it becomes a passive object in the hands of the invisible dominators, who will then manifest themselves, and impose themselves as absolute world-wide rulers. The King of Israel will be at their head, and the ancient promise of the Regnum of the 'Chosen People' will be achieved.

This is the essence of the 'Protocols'. The more general problem which is connected to it has various aspects.

The Protocols became widespread in the West after WWI. In part this was due to the Communist October Revolution in Russia, attempted Communist revolutions elsewhere (such as in Germany), argued relations between Jews and Communism, and publishing by Russian emigrants. In Germany, factors such as the stab in the back theory and the hyperinflation contributed.

Adolf Hitler wrote in Mein Kampf (published 1925-1926) that The best proof that they are authentic is the fact that what the majority of Jews do unconsciously is consciously exposed. And that is what matters. It is completely indifferent from what Jewish brain these disclosures originate; the important thing is that with positively terrifying certainty they reveal the nature and activity of the Jewish people and expose their inner contexts as well as their ultimate final aims. The best criticism applied to them, however, is reality. Anyone who examines the historical development of the last hundred years from the standpoint of this book will at once understand the screaming of the Jewish press. For once this book has become the common property of a people, the Jewish menace may be considered as broken. [3]

However, it has been argued in 2015 article that "Both leaders [Hitler and Goebbels] realized that The Protocols was a fake, but both thought it contained 'inner truth'" and that "Goebbels and Hitler thought The Protocols an accurate description of Jewish intentions". Furthermore, "Hitler did not refer to The Protocols in public speeches after the mention in Mein Kampf, nor did Goebbels refer to it publicly other than once, and that soon after the 1943 conversation with Hitler. It was never mentioned in the prestigious weekly Das Reich, which Goebbels founded in 1941, and for which he wrote a lead article each week. The Protocols had a limited role in Nazi mass propaganda." This included that Der Stürmer (not published by Goebbels) "carried at least nineteen lead stories featuring The Protocols between 1933 and 1941."[4]

Another view is that The Protocols is a forgery created as black propaganda, which was deliberately intended to be discovered to be a forgery and to be linked to the Czarist secret police. The purpose in this view may have been to discredit the anti-Jewish Czarist secret police, the anti-Jewish Czarist regime more generally, and to discredit criticisms of Jewish activities in general as being or being inspired by an absurd and fraudulent conspiracy theory. "Just as the “fascism club” is used to stifle criticism of the Jews, according to Hans Helmut Knütter, the Protocols are likewise used in the form of a “conspiracy-theory-club” to silence critics. The mere mention of “conspiracy” denies expression to the speaker. One needs only mention that this or that is written in the Protocols to evoke the automatic response that they were long ago unmasked as a counterfeit and are furthermore “anti-Semitic.” In the lee of this rhetorical protective umbrella, the incriminated Jewish program can then be realized one way or another. The ever-recurrent reports about the unsavory history of the Protocols and attendant dire consequences strengthen the protective mechanism. We can think of it as a kind of “tele-lobotomy,” remote suppression of part of our intellectual apparatus."[5]