The 25-point Program (German: 25-Punkte-Programm) was the party program of 1920 of the National Socialist German Workers' Party (NSDAP). They were edited by Dr. Robert Ley and published in Munich by the "Central Publishing House of the N.S.D.A.P., Franz Eher, successor" (Zentralverlag der NSDAP, Franz Eher Nachfolger). The source of this US-American translation is: "Nazi Conspiracy and Aggression", Volume IV, Office of the United States Chief Counsel for Prosecution of Axis Criminality, Washington, DC, United States Government Printing Office, 1946.

This is a source text. Spelling and smaller errors in the content can be corrected. The source is given in the "Source" part. 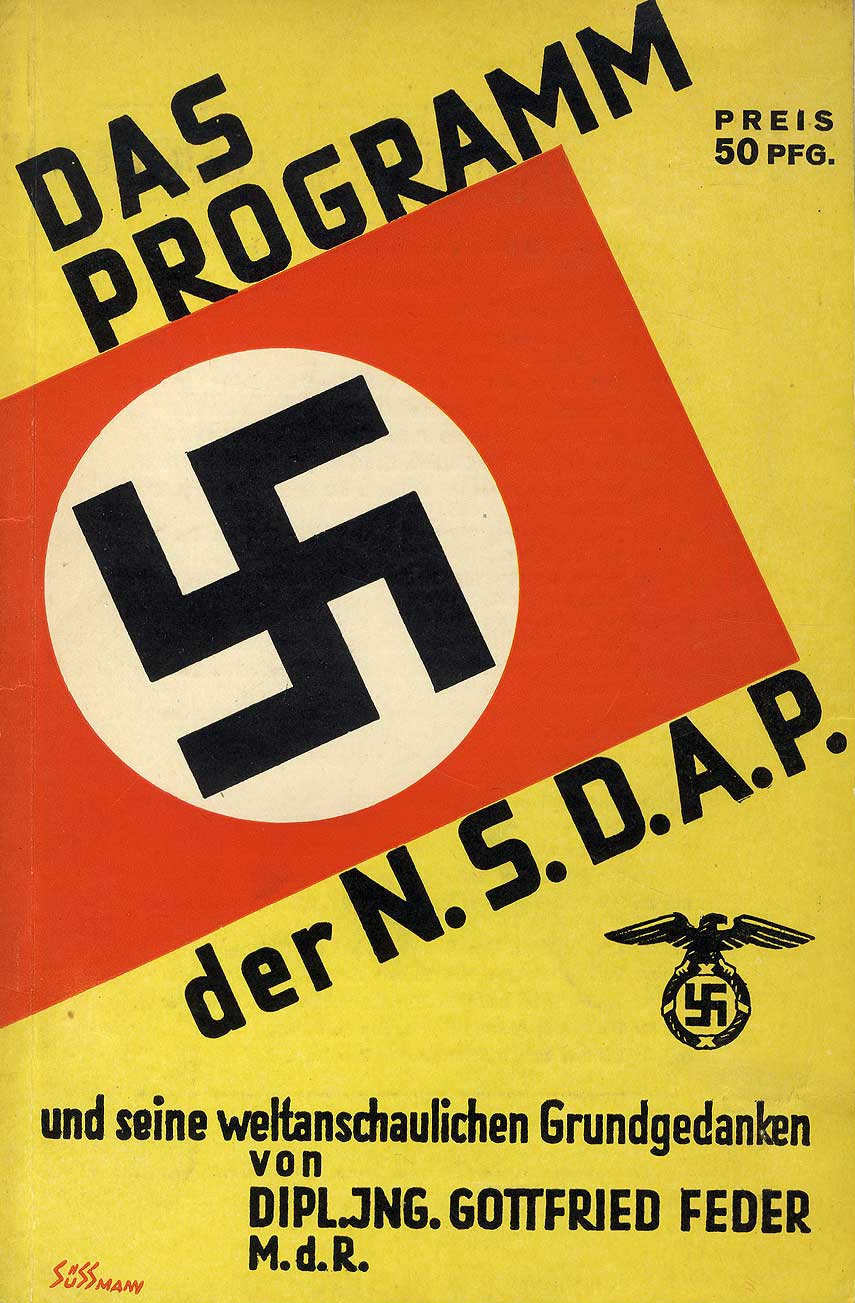 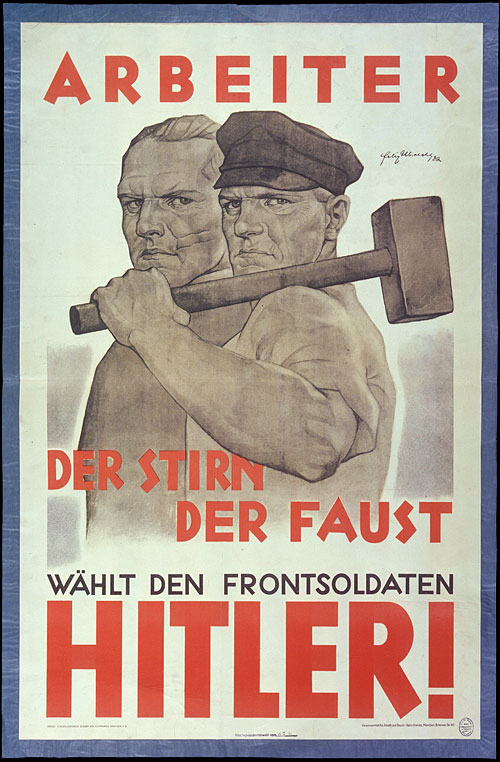 Campaign poster: "Workers of the Mind, of the Fist, Vote for the Front Soldier HITLER!"

The program is the political foundation of the NSDAP and accordingly the primary political law of the State. It has been made brief and clear intentionally.

All legal precepts must be applied in the spirit of the party program.

Since the taking over of control, the Führer has succeeded in the realization of essential portions of the Party program from the fundamentals to the detail.

The Party Program of the NSDAP was proclaimed on the 24 February 1920 by Adolf Hitler at the first large Party gathering in Munich and since that day has remained unaltered. Within the national socialist philosophy is summarized in 25 points:

1. We demand the unification of all Germans in the Greater Germany on the basis of the right of self-determination of peoples.

2. We demand equality of rights for the German people in respect to the other nations; abrogation of the peace treaties of Versailles and St. Germain.

3. We demand land and territory (colonies) for the sustenance of our people, and colonization for our surplus population.

5. Whoever has no citizenship is to be able to live in Germany only as a guest, and must be under the authority of legislation for foreigners.

6. The right to determine matters concerning administration and law belongs only to the citizen. Therefore we demand that every public office, of any sort whatsoever, whether in the Reich, the county or municipality, be filled only by citizens. We combat the corrupting parliamentary economy, office-holding only according to party inclinations without consideration of character or abilities.

7. We demand that the state be charged first with providing the opportunity for a livelihood and way of life for the citizens. If it is impossible to sustain the total population of the State, then the members of foreign nations (non-citizens) are to be expelled from the Reich.

8. Any further immigration of non-citizens is to be prevented. We demand that all non-Germans, who have immigrated to Germany since the 2 August 1914, be forced immediately to leave the Reich.

9. All citizens must have equal rights and obligations.

10. The first obligation of every citizen must be to work both spiritually and physically. The activity of individuals is not to counteract the interests of the universality, but must have its result within the framework of the whole for the benefit of all Consequently we demand:

11. Abolition of unearned (work and labour) incomes. Breaking of rent-slavery.

12. In consideration of the monstrous sacrifice in property and blood that each war demands of the people personal enrichment through a war must be designated as a crime against the people. Therefore we demand the total confiscation of all war profits.

13. We demand the nationalization of all (previous) associated industries (trusts).

14. We demand a division of profits of all heavy industries.

15. We demand an expansion on a large scale of old age welfare.

16. We demand the creation of a healthy middle class and its conservation, immediate communalization of the great warehouses and their being leased at low cost to small firms, the utmost consideration of all small firms in contracts with the State, county or municipality.

17. We demand a land reform suitable to our needs, provision of a law for the free expropriation of land for the purposes of public utility, abolition of taxes on land and prevention of all speculation in land.

19. We demand substitution of a German common law in place of the Roman Law serving a materialistic world-order.

20. The state is to be responsible for a fundamental reconstruction of our whole national education program, to enable every capable and industrious German to obtain higher education and subsequently introduction into leading positions. The plans of instruction of all educational institutions are to conform with the experiences of practical life. The comprehension of the concept of the State must be striven for by the school [Staatsbuergerkunde] as early as the beginning of understanding. We demand the education at the expense of the State of outstanding intellectually gifted children of poor parents without consideration of position or profession.

21. The State is to care for the elevating national health by protecting the mother and child, by outlawing child-labor, by the encouragement of physical fitness, by means of the legal establishment of a gymnastic and sport obligation, by the utmost support of all organizations concerned with the physical instruction of the young.

22. We demand abolition of the mercenary troops and formation of a national army.

23. We demand legal opposition to known lies and their promulgation through the press. In order to enable the provision of a German press, we demand, that: a. All writers and employees of the newspapers appearing in the German language be members of the race: b. Non-German newspapers be required to have the express permission of the State to be published. They may not be printed in the German language: c. Non-Germans are forbidden by law any financial interest in German publications, or any influence on them, and as punishment for violations the closing of such a publication as well as the immediate expulsion from the Reich of the non-German concerned. Publications which are counter to the general good are to be forbidden. We demand legal prosecution of artistic and literary forms which exert a destructive influence on our national life, and the closure of organizations opposing the above made demands.

24. We demand freedom of religion for all religious denominations within the state so long as they do not endanger its existence or oppose the moral senses of the Germanic race. The Party as such advocates the standpoint of a positive Christianity without binding itself confessionally to any one denomination. It combats the Jewish-materialistic spirit within and around us, and is convinced that a lasting recovery of our nation can only succeed from within on the framework: common utility precedes individual utility.

25. For the execution of all of this we demand the formation of a strong central power in the Reich. Unlimited authority of the central parliament over the whole Reich and its organizations in general. The forming of state and profession chambers for the execution of the laws made by the Reich within the various states of the confederation. The leaders of the Party promise, if necessary by sacrificing their own lives, to support by the execution of the points set forth above without consideration.

Adolf Hitler proclaimed the following explanation for this program on the 13 April 1928:

Regarding the false interpretations of Point 17 of the program of the NSDAP on the part of our opponents, the following definition is necessary: "Since the NSDAP stands on the platform of private ownership it happens that the passage" gratuitous expropriation concerns only the creation of legal opportunities to expropriate if necessary, land which has been illegally acquired or is not administered from the view-point of the national welfare. This is directed primarily against the Jewish land-speculation companies.