Richard Walther Oscar Darré (b. 14 July 1895; d. 5 September 1953) was a German officer of the Imperial German Army, the Freikorps and the SS, at last SS-Obergruppenführer as well as Diplom-Kolonialwirt (colonial economist) since autumn 1920,[1] Diplom-Landwirt (agronomist) since 1925 and one of the leading National Socialist "blood and soil" (German: Blut und Boden) ideologists. He served as Reich Minister of Food and Agriculture (Reichsminister für Ernährung und Landwirtschaft) and Reich Farmers' Leader (Reichsbauernführer) from 1933 to 1942.

Darré was not part of the first coalition government headed by Hitler. However, on 29 June 1933, shortly after the approval by the German Parliament of the Enabling Act of 23 March, he became Reich Minister of Food and Agriculture, succeeding DNVP leader Alfred Hugenberg, who had resigned. 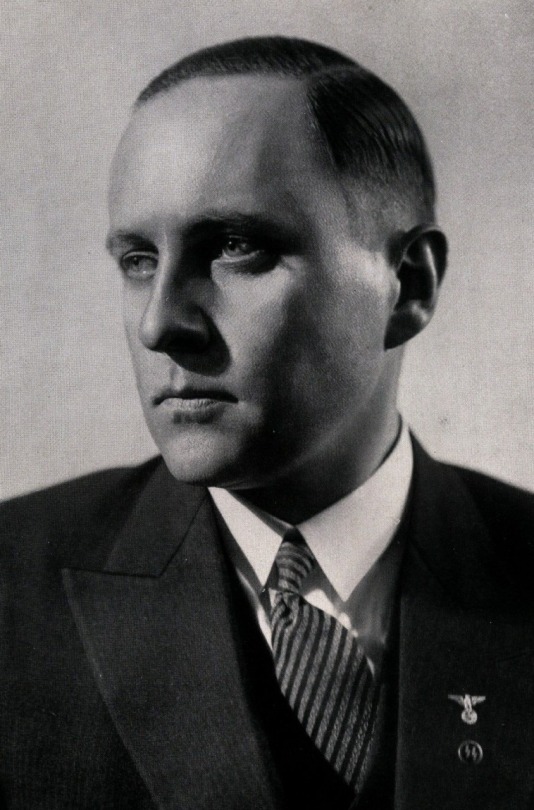 Darré as a member of the NSDAP and

; As a newly-appointed administrator of the SS Race and Settlement Main Office, he assisted in formulating plans for the expansion of farming in a German-dominated Europe. He also founded the Reichsnährstand to regulate food production in the Third Reich. 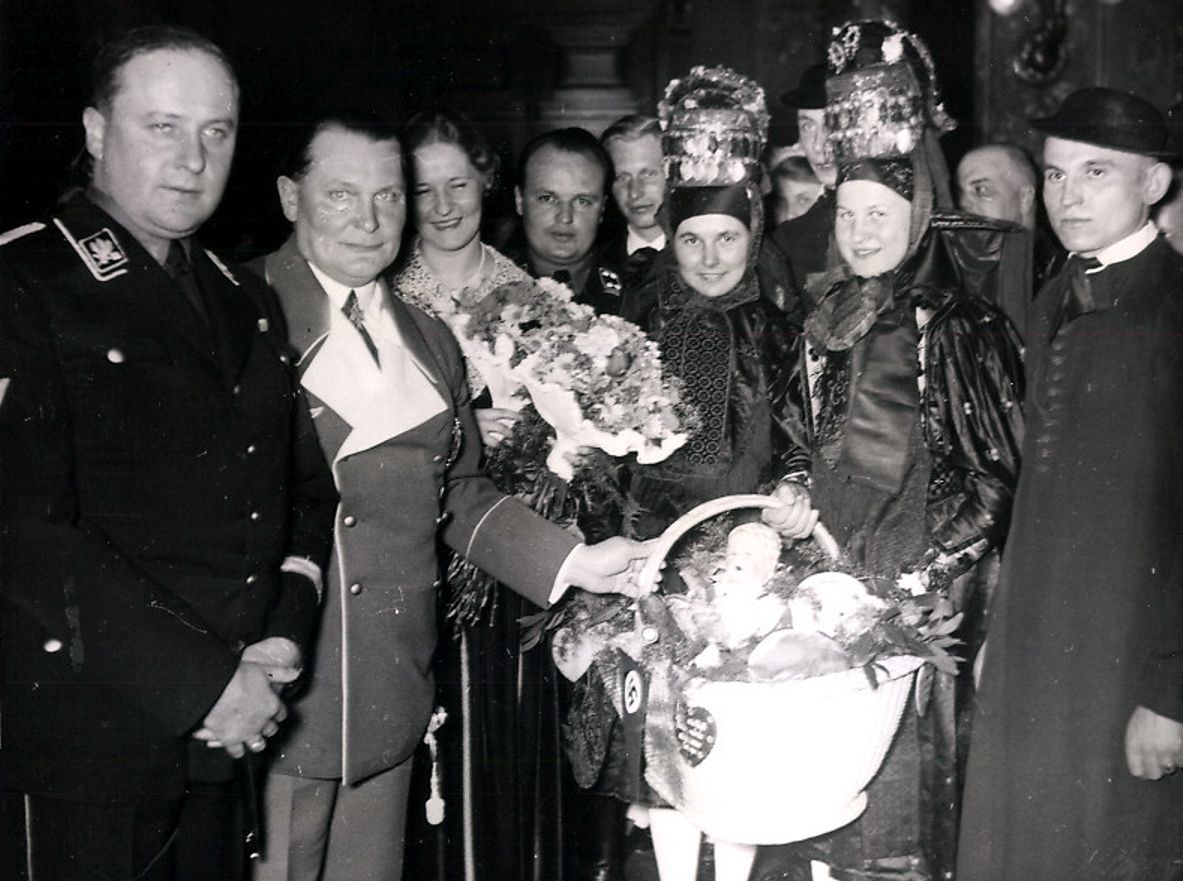 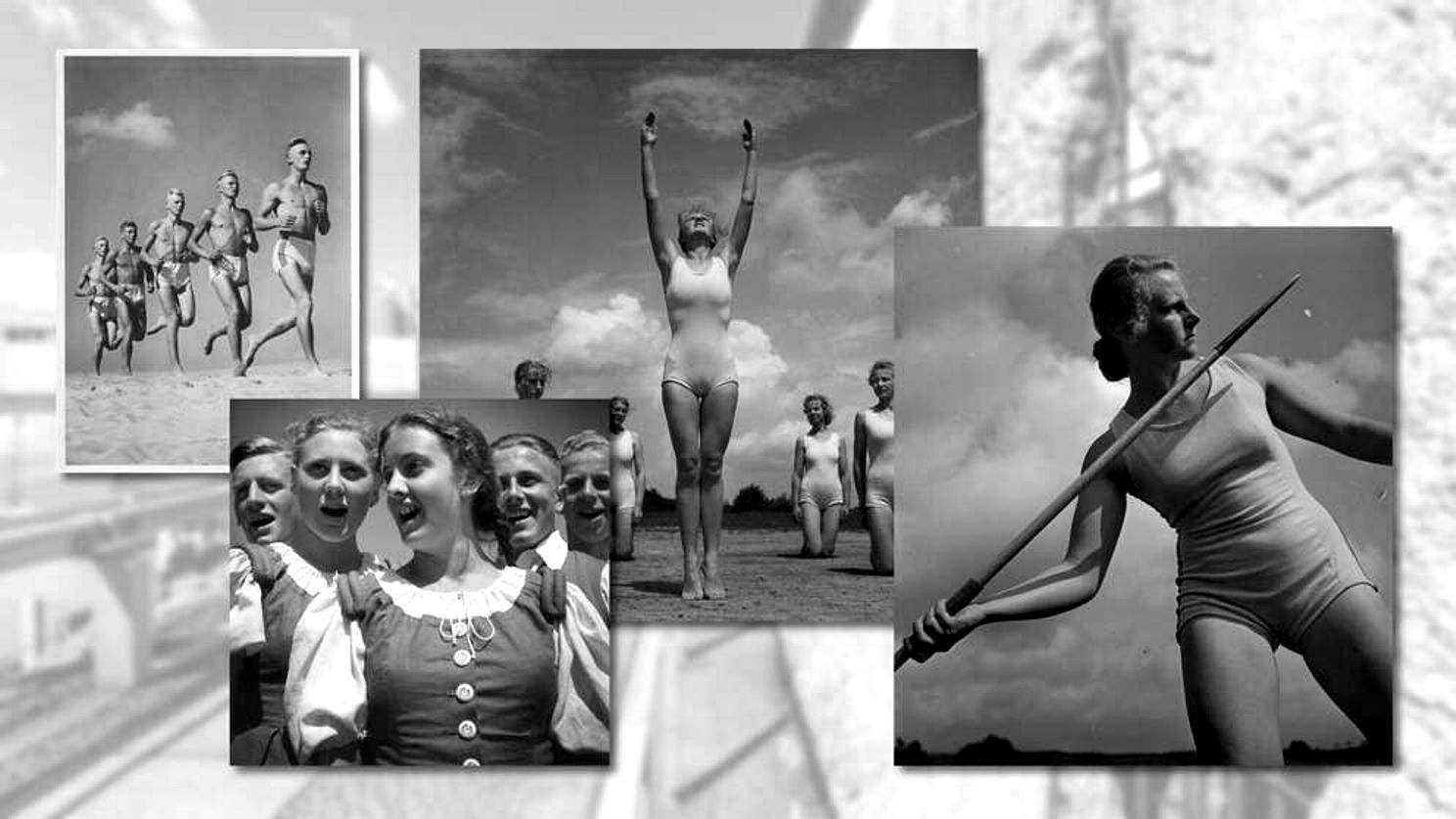 Pictures by Anna Koppitz for Darré[2] 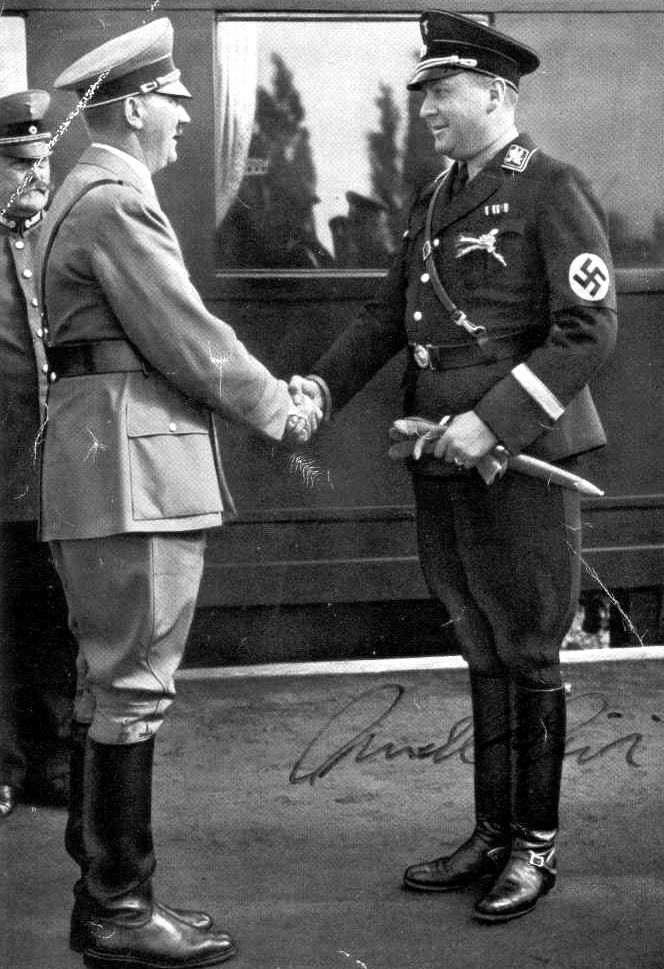 He was baptised with the name "Richard" (written in Spanish as Ricardo); the second name "Walther" was later added to differentiate him from his father, also named Richard, and he became known by this name in political life, though he continued to sign his name as either "Richard Walther" or "R. Walther"

His father moved to Argentina in 1888 as a partner of the German international import/export wholesaler Engelbert Hardt & Co.[4] Although his parents' marriage was not a happy one (Richard Walther remembered his father as a hard drinker and a womanizer[6]), they lived prosperously, and educated their children privately, until they were forced to return to Germany as a result of worsening international relations in the years preceding World War I. Darré gained fluency in four languages: Spanish, German, English, and French.

Darré's parents sent him 1905 to a boarding school in Heidelberg; in 1911 he attended as an exchange pupil King's College School in Wimbledon. The rest of the family returned to Germany (Wiesbaden) in 1912. Richard (as he was known in the family) then spent two years at the Oberrealschule in Gummersbach, followed in early 1914 by the Deutsche Kolonialschule Wilhelmshof (for resettlement in the German colonies) at Witzenhausen, near Kassel, south of Göttingen, which awakened his interest in farming.

After a single term at Witzenhausen, he volunteered for army service. He was lightly wounded a number of times while serving during World War I, but fared better than most of his contemporaries. When the war ended he contemplated returning to Argentina for a life of farming, but the family's weakening financial position during the years of inflation made this impossible. Instead he returned to Witzenhausen to continue his studies at the Kolonialschule. He then obtained unpaid work as a farm assistant in Pomerania: his observation of the treatment of returning German soldiers there influenced his later writings.

In 1922 he moved to the University of Halle to continue his studies: here he took an agricultural degree, specialising in animal breeding. He did not complete his PhD studies until 1929, at the comparatively mature age of 34. During these years he spent some time working in East Prussia and Finland. 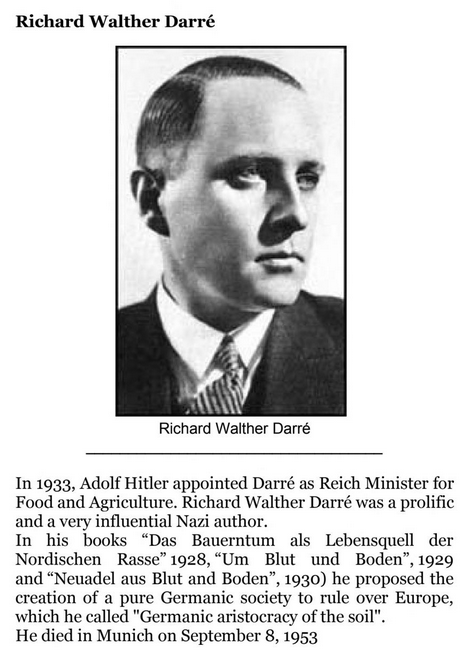 As a young man in Germany, Darré initially joined the Artaman League (de), a Völkisch youth group committed to the back-to-the-land movement.[7] Against this backdrop Darré began to develop the idea that the future of the Nordic race was linked to the soil in what came to be known as "Blut und Boden". Here "Blut" (blood) represents race or ancestry, while "Boden" can be translated as soil, territory, or land. The essence of the theory was the mutual and long-term relationship between a people and the land that it occupies and cultivates.

Darré's first political article (1926) was on the subject of Internal Colonisation, which argued against Germany attempting to regain the lost colonies. Most of his writing at this time, however, was on technical aspects of animal breeding. His first book, Das Bauerntum als Lebensquell der nordischen Rasse ('Peasantry as the life-source of the Nordic Race'), was written in 1928.[8] It asserted that German farms had previously been bestowed on one son, the strongest, ensuring the best were farmers, but partible inheritance had destroyed that.[7] The ancient tradition had to be restored, as well as serious efforts made to restore the purity of Nordic blood, including exterminating the sick and impure.[7]

In her biography of him, Anna Bramwell interprets his writing as an early example of "Green" or Conservationist thinking: he advocated more natural methods of land management, placing emphasis on the conservation of forests, and demanded more open-space and air in the raising of farm animals. Those who heard and heeded Darré's arguments included Heinrich Himmler, himself one of the Artamans.[7] Darré's work also glorified "peasant virtues" - as found in the remnants of the Nordics who lived in the country - and disparged city living.[8]

"In his two major works, he defined the German peasantry as a homogeneous racial group of Nordic antecedents, who formed the cultural and racial core of the German nation. [..] Since the Nordic birth-rate was lower than that of other races, the Nordic race was under a long-term threat of extinction."[3]

As a National Socialist Party member

After Paul Schultze-Naumburg had introduced him to Adolf Hitler, Darré in July 1930 joined the National Socialist Party and the SS. Darré's NSDAP number was 248,256 and his SS number was 6,882.[9] Darré went on to become an active National Socialist Reichsleiter and to set up an agrarian political apparatus to recruit farmers into the party. Darré saw three main roles for this apparatus: to exploit unrest in the countryside as a weapon against the urban government; to win over the peasants as staunch National Socialist supporters; to gain a constituency of people who could be used as settlers to displace the Slavs in future conquests in the East.

On 1 January 1932 he became head or leader (leiter) of the newly established SS Race and Settlement Main Office (Rasse- und Siedlungshauptamt or RuSHA), in the rank of a SS-Gruppenführer. On 10 May 1935, Heinrich Himmler named him Chef (chief) of the RuSHA with effect from 30 January 1935.

In his religious views, Dárre would belong to the paganist faction within the National Socialist movement; however, unlike Heinrich Himmler and Alfred Rosenberg, he has not become a figure of interest in the speculation about National Socialist occultism.[10]

Darré's works were primarily concerned with the ancient and present Nordic peasantry (the ideology of Blood and soil): within this context, he made an explicit attack against Christianity. In his two main works (Das Bauerntum als Lebensquell der Nordischen Rasse, Munich, 1929 and Neuadel aus Blut und Boden, Munich, 1930), Darré accused Christianity, with its "teaching of the equality of men before God," of having "deprived the Teutonic nobility of its moral foundations", the "innate sense of superiority over the nomadic tribes".[11] Since 31 July 1932, he was also a member of the Reichstag.

Soon after the National Socialists came to power in 1933, Darré became Reich Minister of Food and Agriculture succeeding resigned DNVP leader Alfred Hugenberg, and Reichsbauernführer (usually translated as Reich Peasant Leader, though the word Bauer also denotes Farmer), serving from June 1933 to May 1942. He was instrumental in founding the National Socialist Reichsnährstand corporation[12] as part of the Gleichschaltung process. Darré campaigned for big landowners to part with some of their land to create new farms, and promoted the controversial Reichserbhofgesetz, which reformed the inheritance laws to prevent splitting up of farms into smaller units.

He developed a plan for "Rasse und Raum" ("race and space", or territory) which provided the ideological background for the National Socialist expansive policy on behalf of the "Drang nach Osten" ("Drive to the east") and of the "Lebensraum" ("Living space") theory expounded in Mein Kampf. Darré strongly influenced Reichsführer-SS Himmler in his goal to create a German racial aristocracy based on selective breeding. The National Socialist policies of eugenics would lead to the annihilation of millions of non-Germans.

In the course of the preparations for the Generalplan Ost, Himmler would later break with Darré, whom he saw as too theoretical. Darré was generally on bad terms with Economy Minister Hjalmar Schacht, particularly as Germany suffered poor harvests in the mid 1930s.

By September 1938, Himmler was already demanding that Darré step down as leader of the RuSHA in favour of Günther Pancke. Darré finally had to resign as Reich Minister in 1942, ostensibly on health grounds, and was succeeded by his state secretary Herbert Backe.

The transcript of a 1940 speech given by Darré was published in Life magazine, 9 December 1940: "by blitzkrieg ... before autumn ... we shall be the absolute masters of two continents... a new aristocracy of German masters will be created [with] slaves assigned to it, these slaves to be their property and to consist of landless, non-German nationals.... we actually have in mind a modern form of medieval slavery which we must and will introduce because we urgently need it in order to fulfill our great tasks. These slaves will by no means be denied the blessings of illiteracy; higher education will, in future, be reserved only for the German population of Europe...."[13]

In the spring of 1939, Richard Walther Darré, Reichsminister für Ernährung und Landwirtschaft contacted Anna Koppitz (1895–1989), who lived in Vienna. He engaged the widow of the renowned art photographer Rudolf Koppitz, with whom she had worked intensively until his death, to take pictures of his beloved project, which was to photograph the pupils of the Reichsschule des Reichsnährstandes für Leibesübungen Burg Neuhaus, located near Wolfsburg. The declared objective of the institute was to create racial models by selecting gymnasts from farmers’ families, where Darré saw the future of the German people. Anna Koppitz’s photographs were to play a central role in the dissemination of this model.

On 14 April 1945, the US-American authorities arrested Darré at Flak-Kaserne Ludwigsburg (Württemberg) and tried him at the subsequent Nuremberg Trials as one of 21 defendants in the "Ministries Trial", also known as the Wilhelmstraße Trial (1947-1949).[14]

He was charged under the following counts[14]:

Darré was sentenced to seven years at Landsberg Prison. He nevertheless was released on 16 August 1950 and spent his final years in Bad Harzburg.

Richard Walther Darré died in a Munich hospital on 5 September 1953 of cancer of the liver.

Darré was buried in the family gravesite (with a crypt under a grave slab), which had already been consecrated in 1936 (his mother Eleonore, who died 18 July 1936, was buried there on 22 July 1936), in the old cemetery on Hildesheimer Straße in Goslar. The burial was by no means quiet - according to a report in the Goslarsche Zeitung on September 10, 1953, half of Goslar was on its feet with over 1,000 mourners, among them mayor Grundner-Culemann with some councilors and chief city director Schneider. Numerous farmers from around Germany had gathered to express their bond with the man Richard Walther Darré. Pastor Lindemann had interrupted his stay at a spa in southern Germany, which had just begun, in order to give the deceased his final blessing, as he had wished. It is very difficult, the minister said, to recognize the love of God in a moment of pain.

Darré married twice. In 1922, he married Alberta Helene Theresa Alma Staadt (b. 16 July 1901 in Wiesbaden), a schoolfriend of his sister Ilse in Goslar. He divorced Alma in 1931, and subsequently married Charlotte Freiin von Vietinghoff genannt Scheel (d. 1978), daughter of Freiherr von Vietinghoff-Scheel, an emigre to Germany who lost his lands in the Baltics to the Russians, and later lost his farm in Germany through the Depression.