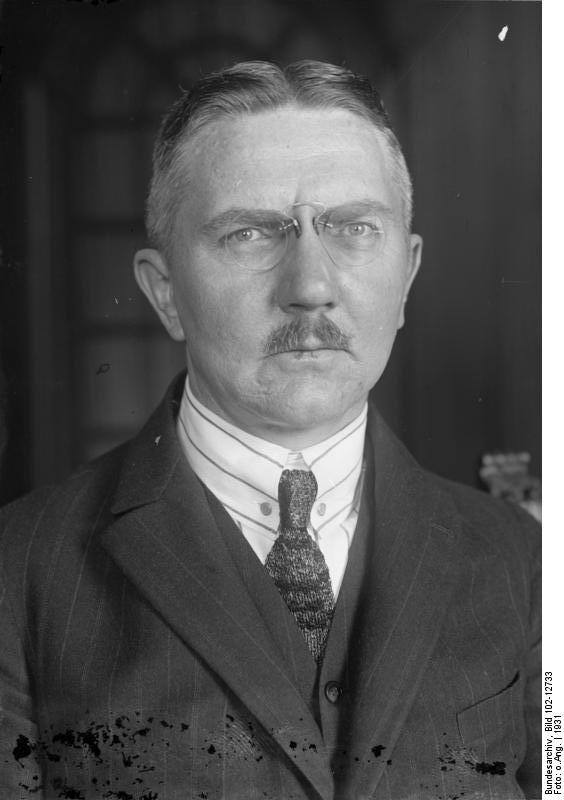 Hjalmar Horace Greeley Schacht (22 January 1877 – 3 June 1970) was a universally regarded brilliant German economist who served as President of the German Reichsbank and economic ambassador both for the Weimar Republic and National Socialist Germany. He was also Minister of Economics from 1934 to 26 November 1937, when he resigned. He was replaced by Walther Funk. He was dismissed as President of the Reichsbank in January 1939.

After the attempt on Hitler's life on 20 July 1944, Schacht fell under suspicion due to his wide range of contacts, was arrested and sent to different concentration camps.

Schacht was one of the defendants at the Nuremberg Show Trials but, along with Franz von Papen, was acquitted. Von Papen relates that they had visits from insulting American psychiatrists who "saw it their duty to determine our sanity". Schacht took part in their "silly tests" and von Papen relates that "these investigations did provide one lighter moment when the marks were added up and announced. Top of the class was Dr. Schacht - a result that surprised none of us." Another day during luncheon in the prison, an American photographer came into the room and tried to photograph defendants. Schacht was furious and picked up his cup of coffee and threw it in the photographers face. For soiling a United States uniform he was forbidden his exercise period for four weeks, during which period he was also refused coffee.[1] After his acquittal he was re-arrested and sentenced by an Allied "denazification" court to eight years in a work camp. However, Schacht was released in 1948.