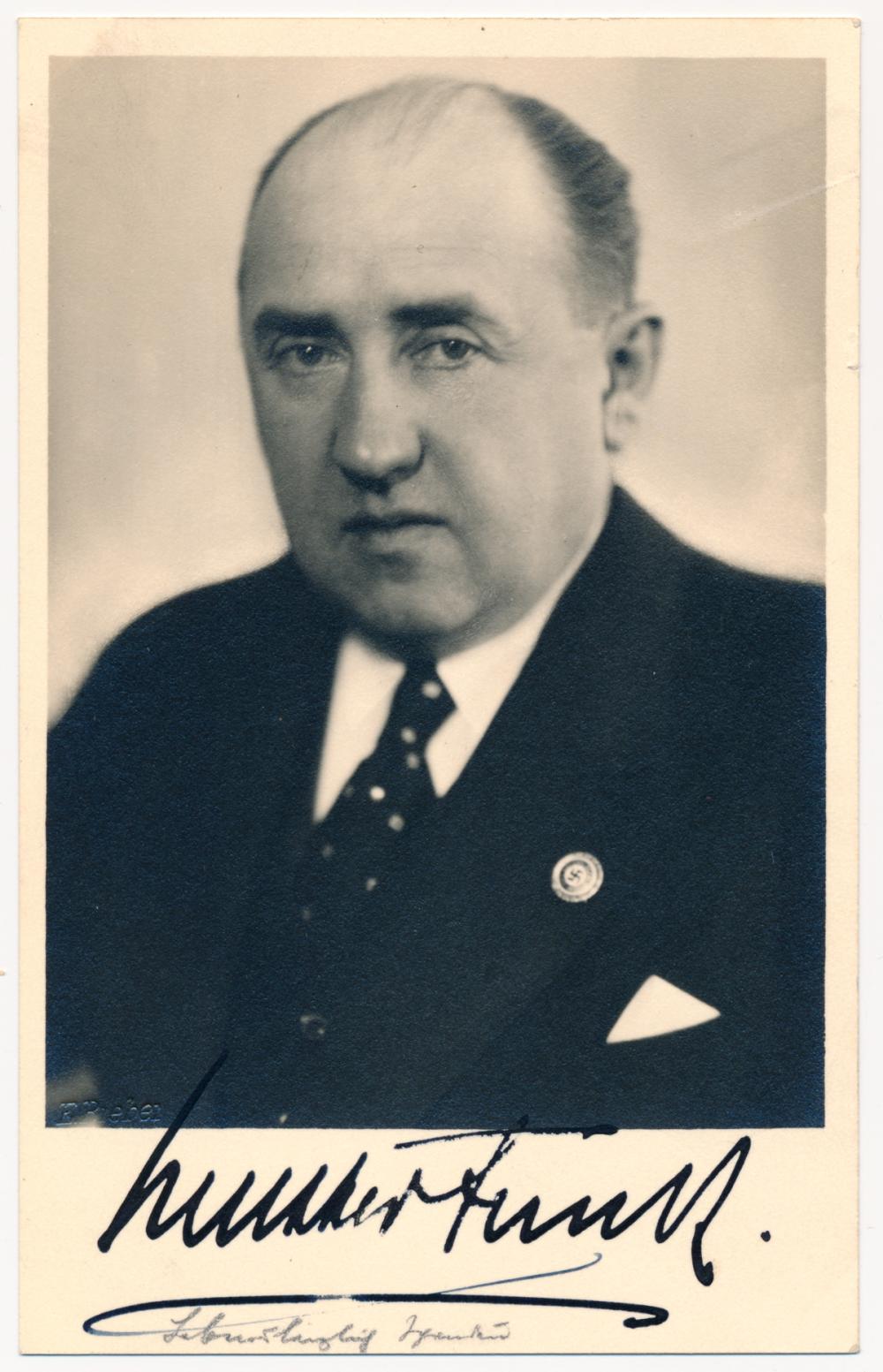 Walther Funk (18 August 1890 – 31 May 1960) was a German economist and prominent National Socialist official who served as Reich Minister for Economic Affairs from 1938 to 1945; from Spring 1938 till May 1945 he was also President of the Reichsbank. He was convicted as a "war criminal" by the Allied Nuremberg Show Trials.[1]

Walther Funk was born into a merchant family in Danzkehmen, near Trakehnen, Kreis Stalluponen, in East Prussia. He was the son of Wiesenbaumeister Walther Funk the elder and his wife Sophie (née Urbschat). He studied law, economics, and philosophy, at the Humboldt University of Berlin and literature and music at the University of Leipzig. In The Great War he served in the infantry, but was discharged as 'now medically unfit for service’ in 1916. He almost immediately went to work as a journalist for the financial newspaper Berliner Börsenzeitung, of which he became editor in 1922 until summer 1931.

In 1919 Funk married Luise Schmidt-Sieben, who remained loyal to him until death.

A classical pianist from a highly respected artistic family, married for 25 years at the end of the war, Walther Funk was said by Schacht to be "extraordinarily musical", a "first-rate connoisseur of music and his preferences were decidedly for the artistic and literary."[2] The composer, Franz Lehár, presented Funk with the full orchestral score, in a gold-tooled Morocco folder, of his famous operetta The Merry Widow "as a sign of his thanks and his reverence" for Funk's promotion of Lehár's creations.[3]

Funk was a nationalist and anti-Marxist and after leaving the newspaper joined the National Socialist Party, becoming friends with Gregor Strasser, who arranged his first meeting with Adolf Hitler. Partially because of his knowledge of economic policies, he was elected a Reichstag deputy in July 1932, and within the party, he was made chairman of the Committee on Economic Policy in December 1932. However, after the party came to power, he stepped down and was instead made Chief Press Officer of the new Government on 30 January 1933.

On 11 March 1933, Funk was appointed as State Secretary (Staatssekretär) at the Ministry of Public Enlightenment and Propaganda (Reichsministerium für Volksaufklärung und Propaganda) where he became an important figure. In early 1938, he took office as Minister Plenipotentiary for Economics (Wirtschaftsbeauftragter). He also became Reich Minister of Economics (Reichswirtschaftsminister) in February 1938, replacing Hjalmar Schacht, who had resigned on 26 November 1937 in a power struggle with Reichsmarschall Hermann Göring,[4] who wanted to tie the ministry more closely to his Four Year Plan Office. Funk was a born bureaucrat and became very active in the economic direction of the Reich. He was described by Speer as “amiable and persuasive.”[5] One of his representatives attended a conference on 14th October 1938, at which Goering announced a gigantic increase in armaments and requested that the Ministry of Economics increase exports to obtain the necessary exchange.

Goebbels relates on 1 January 1939 that "Funk wrote me a very pleasant, affectionate letter from Sicily" with New Year Wishes. "He is a decent fellow. One of the few whom one can rely upon."[6]

For a year, April 1938-March 1939, Funk was a Director of the Swiss-based multi-national Bank of International Settlements,[7] and in the Spring of 1938, Hitler appointed Funk as President of the Reichsbank.[8] Funk was criticised by Schacht in the summer of 1939 for his speech to the central Committee of the Reichsbank which Schacht described as "sheer inflationary policy".[9]

On 30 May 1939, following the increased diplomatic tensions and Britain’s guarantee to Poland two months previously, as Minister of Economic Affairs, Funk attended a meeting at which detailed plans were proposed for financing during wartime, and in the summer one of Funk’s subordinates sent a memorandum to the OKW on the use of prisoners of war to make up labour deficiencies which would arise in the case of mobilisation. It is unclear if Funk proposed this.[10] He was made a member of the Ministerial Council for the Defence of the Reich in August 1939. 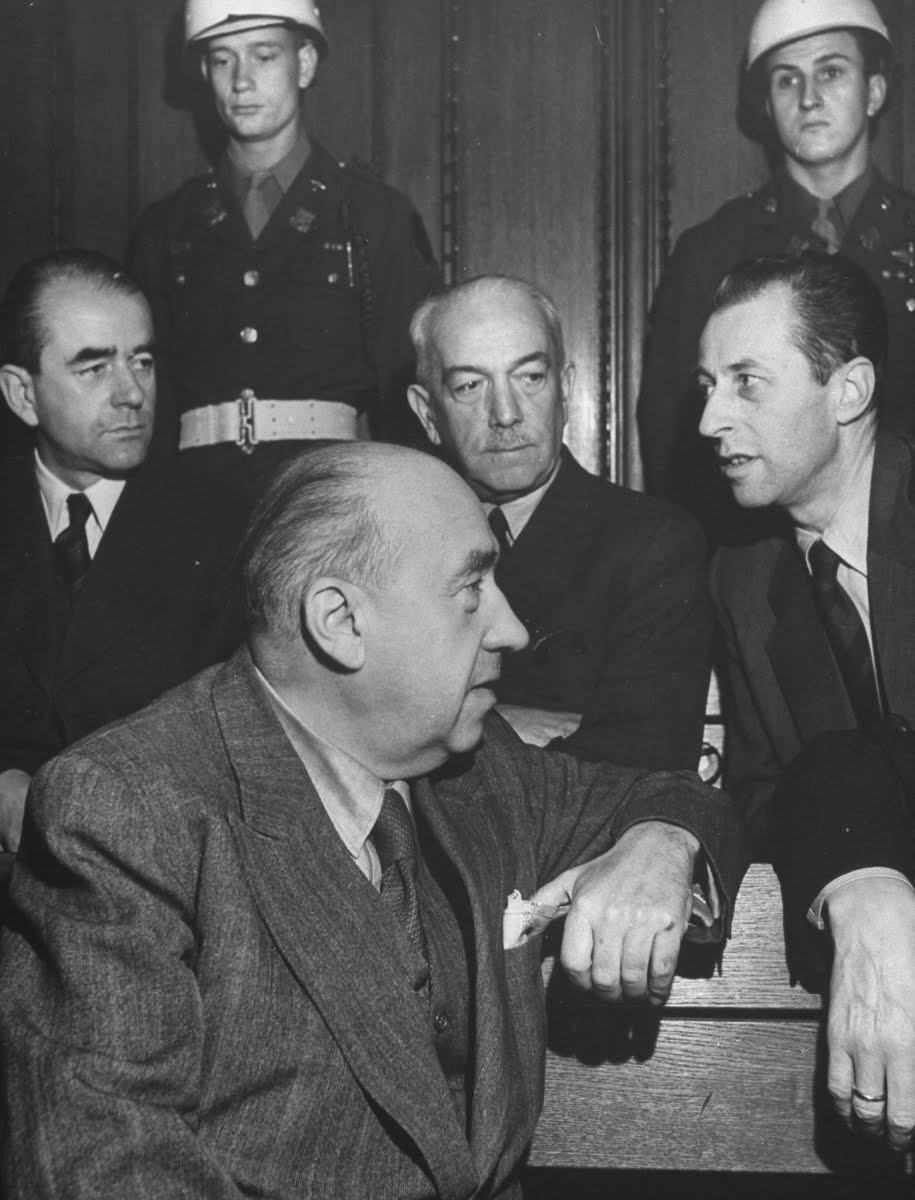 Funk was reported by Goebbels on 25 June 1941 as having "a lot of worries....as these days he has the job of organising almost the entire European economy" and complaining about Robert Ley's organisation exceeding their budget.[11] Funk is also said to have participated in the economic planning which preceded the attack on the Soviet Union that summer. His deputy held daily conferences with Alfred Rosenberg on the economic problems which would arise following the occupation of Soviet territory. Funk himself ordered the printing of rouble notes for the occupation currency. Following the invasion he made a speech in which he described plans for the economic exploitation of the "vast territories of the Soviet Union" and the raw materials which would then be available to the rest of Europe. In December 1942 he was drawn into the opposition conspiracy by Goebbels and Speer against Martin Bormann.[12] Funk was instrumental in supporting Speer in taking over control of all war production in July 1943, which, Speer said, "the Ministry of Economics had proved too weak to enforce". Funk and Speer then went to Hitler’s HQ to receive his final authorisation. Funk was appointed to the Central Planning Board in September 1943.

Despite poor health brought about by his diabetes, Funk was tried by the victorious plutocratic Allies, and the Soviets, with other German leaders at the Nuremberg show trials. Schacht relates “those with whom I talked most were Funk, who sat next to me in the dock, and von Papen, intimate acquaintances of mine of long-standing.”[13] He said that Funk “was a decent enough fellow and not stupid…I am convinced that there were many matters of which he had no knowledge whatsoever.”[14] Accused of conspiracy to commit crimes against peace; planning, initiating and waging wars of aggression; war crimes and crimes against humanity, Funk argued that, despite his titles, he had very little actual power in the regime and Göring described him as "an insignificant subordinate" (having previously encouraged Funk by telling him that he would take their responsibility upon himself.[15]) In court Funk argued that he had served the State correctly in all his responsibilities, although Schacht said “in the witness-box his defence was weak and lachrymose.”[16] That said, the American psychiatrist Dr. Gilbert tested Funk's IQ and found that it was well above average at 124.[17]

Like most of the defendants, Funk was accused of performing "immoral acts" such as accepting birthday gifts from Hitler, proving "willing participation in the Common Plan". (Obviously, such acts are not necessarily illegal.) Funk claimed that the British and the Poles had conspired to provoke Germany into war in the belief that the generals would overthrow Hitler. He added that "I did what I could to prevent illegal acts. I prevented the surrender of the Belgian gold (then in French custody) to Germany because its ownership was not clear. I also prevented the devaluation of the franc during the occupation. By that act alone I saved France more money than all the confiscated property was worth."[18]

The United States Chief Prosecutor Jackson, in a disgusting abuse of European courtroom procedure and protocols, labelled Funk as "The Banker of Gold Teeth", supposedly extracted from concentration camp internees and then sold by the SS to the Reichsbank for melting down to yield bullion. Many other gold items were also allegedly stolen from inmates, such as jewellery, gold glasses frames, and gold finger rings. Funk, however, was never in the SS and his accusers failed to grasp that the SS was an entirely separate ministry with its own records, 99% of which Funk had no access to. Instead the Allies linked Funk into knowledge of these, despite his denials. The gold was stored in a vault at the Reichsbank, along with shaving kits, fountain pens, large alarm clocks, and other more or less useless junk. Forgotten was Rudolf Hoess's testimony that the teeth were melted down at Auschwitz. The revisionist Carlos Porter writes on Funk that

"Also given short shrift was the ridiculous Oswald Pohl affidavit (Document 4045-PS), in which Funk was accused of discussing the use of gold teeth from dead Jews to finance the war at a dinner party attended by dozens of people, including waiters (XVIII 220-263 [245-291]). This affidavit is in German and is witnessed by the notorious Robert Kempner. Almost comically Pohl was later convicted of "steaming" people to death in 10 "steam chambers" at Treblinka, and making doormats out of their hair (NMT IV 1119-1152) (Fourth National Military Tribunal, Nuremberg)."[19]

Funk testified that the amounts and kinds of loot were "absurd" and pointed out that the SS acted as customs police and enforced exchange control regulations, including a prohibition against the ownership of gold, silver, and foreign coins or currency. It was quite natural that the SS should confiscate large amounts of valuables, and that the SS, as a government agency, should have financial accounts, and that these accounts would contain valuables. Germans kept valuables in the same vaults as well, to which the Reichsbank had no access, since they were private safety deposit accounts. With the increased bombing raids, more and more valuables were deposited in the vaults by ordinary German citizens. Finally, after a particularly damaging raid on the bank, the valuables were removed to a potassium mine in Thuringia. The Americans found the valuables there, and falsified a film of it. Funk and his attorney showed the falsity of the film using an opposing credible witness, in some of the shrewdest testimony and cross examination in the entire trial.[20]

Funk’s wartime biography Walther Funk, A Life for Economy was also twisted by the prosecution with selected out-of-context citations and used against him during the trial. Funk told the court: "I have never in my life consciously done anything that could contribute to the indictment against me."[21] He added that the "frightful crimes [he had heard in court] filled him with profound shame".[22]

He was convicted on counts 2, 3 and 4 of the indictment and given a sentence of life imprisonment.

In 1946 Funk's wife Luise was residing at Bergerhof, by Bad Toelz in Bavaria. Funk was sent to Spandau Prison, Berlin, along with other convicted defendants. His health, however, continued to deteriorate and he was released on 16 May 1957. He made a last-minute call on Rudolf Hess, Albert Speer and Baldur von Schirach before leaving the prison.[23] He died three years later in Düsseldorf from diabetes complications. 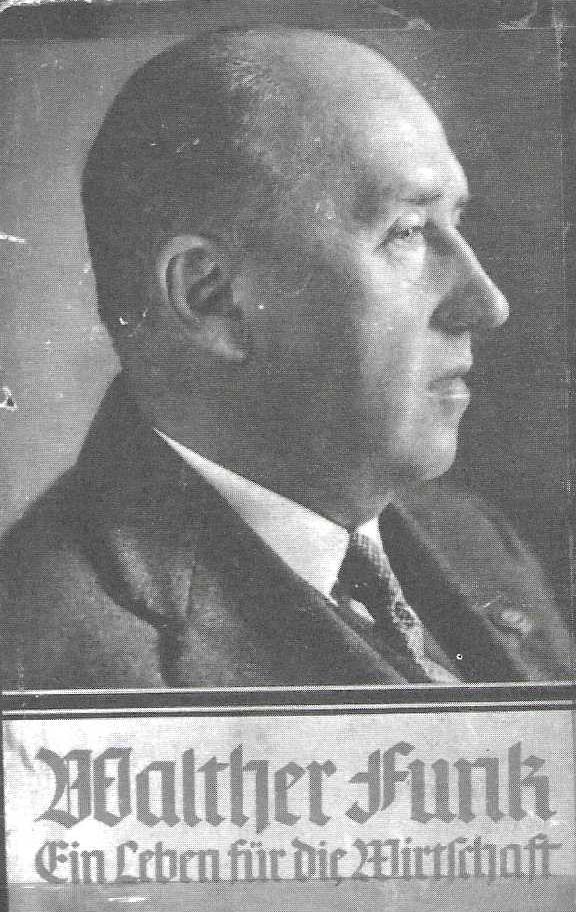 Funk's autobiography: A Life for the Economy.

Funk had a remarkable career, all things considered. He was, for instance, part of Hitler’s intimate circle right up to the end, a loyal unquestioning functionary (like Wilhelm Keitel). He worked closely with numerous of the leading National Socialists such as Albert Speer, Hermann Göring, and Joseph Goebbels throughout his career. Speer described him as "affable, intelligent and crafty". His views on Jews are unknown.

In addition to his many essays and articles in journals, magazines and newspapers, Funk wrote several books (in German):