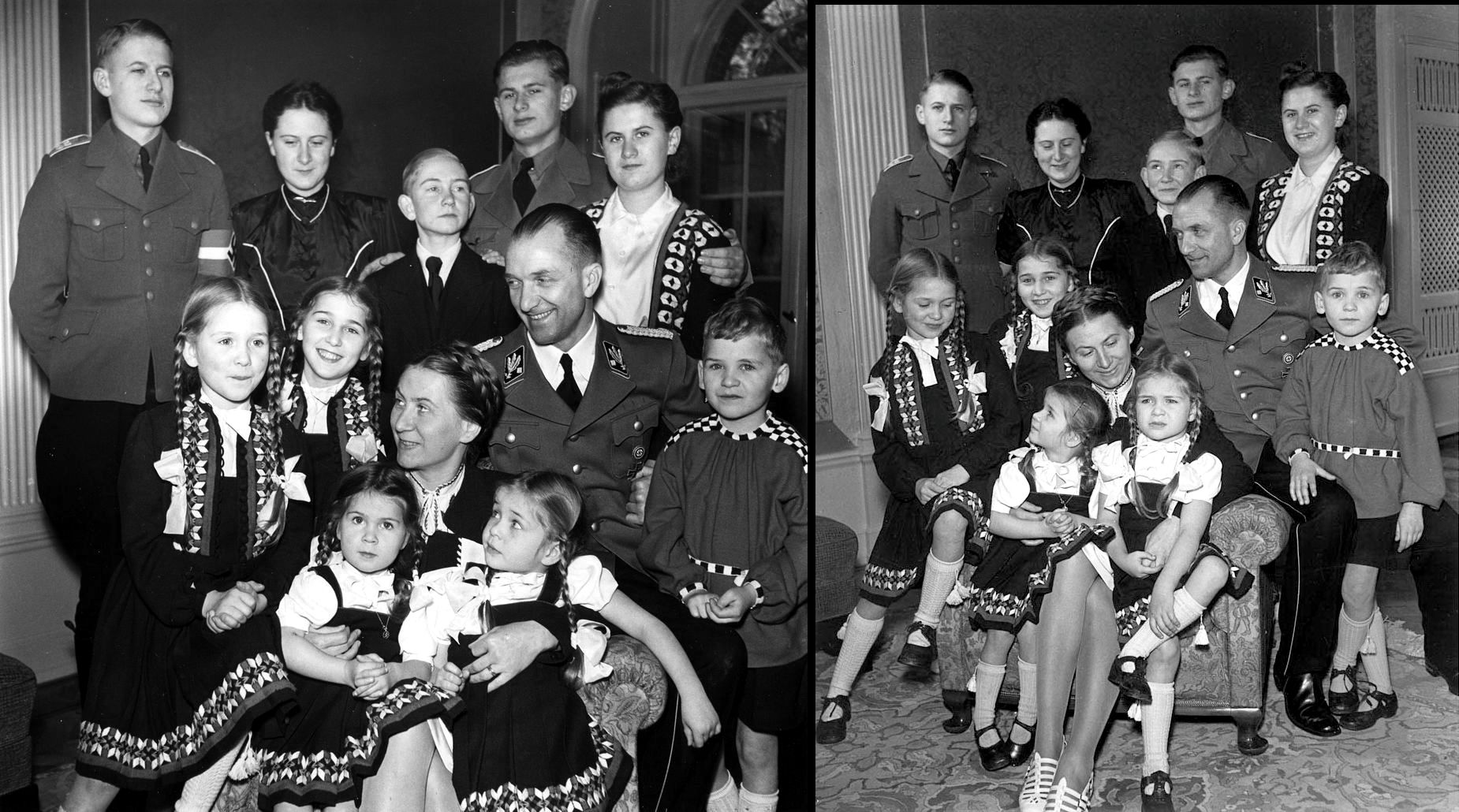 August Friedrich Wilhelm Heißmeyer (sometimes Heissmeyer; b. 11 January 1897 Gellersen, Lower Saxony, German Empire; d. 16 January 1979 in Schwäbisch Hall, Baden-Württemberg, West Germany) was a German veteran of the Imperial German Army in WWI, Freikorps warrior, officer of the SA and the SS, at last SS-Obergruppenführer und General der Waffen-SS und Polizei as well as Ministerialdirektor and member of the Reichstag. After the war, he was given a three-years prison sentence by a "denazification" court.

August Heißmeyer was born in Gellersen, nowadays part of Aerzen. His mother was a born Stuckebrock, a name he would later use to elude capture. After finishing school, Heißmeyer joined the German Army. In World War I he served in the 4. Hannoversches Infanterie-Regiment Nr. 164, became a lieutenant in 1916, was Ordonnanz- and Späh-Offizier in the 111. Infanterie-Division, where he was wounded (shot in the arm) on 9 April 1917. As leader of a company in the Reserve-Infanterie-Regiment Nr. 269, he was transfered to the Fliegertruppe, and became an Observer in the Fliegerabteilung 260 Lb (Artillerie) from 21 March 1918 until 19 February 1919. He was decorated with the Iron Cross, First Class. From March until August 1920 he served with the Freikorps "von Hanstein" of the Marine-Brigade „von Loewenfeld“ and took part in the Kapp–Lüttwitz Putsch. He studied economics from October 1920 until February 1922.

After giving up his studies, he busied himself as a driving teacher. In 1923 he first came into contact with the early NSDAP, whom he joined on 30 October 1925 (NSDAP Nr.: 21 573). On 1 May 1925, Heißmeyer had also joined the SA in which he participated actively, was responsible for building up the SA-Gausturm Hannover-Süd, and was for a time the acting Gauleiter.

From September 1928 until January 1930, he worked at the Siemens-Schukert Werke. In January 1930, Heißmeyer applied to join the SS and was accepted as the 4370th member on 17 December 1930. From 1932, Heißmeyer was an associate at the SS main office and was promoted many times. From 1935, he was "Head of the SS Main Office" as successor of Curt Wittje, thus reaching a key position in the SS hierarchy. On 9 November 1936, Heißmeyer was appointed SS Obergruppenführer and Inspector of the National Political Institutes of Education or Nationalpolitische Erziehungsanstalt (NPEA), also visited by his two sons. In April 1939, Richard Schulze served as an adjutant to Heißmeyer until his transfer on 8 June. Furthermore, in 1939, Heißmeyer was appointed SS-Oberabschnittsleiter "East" and in 1940 "Higher SS and Police Leader Spree". He thereby oversaw the Berlin-Brandenburg area.

With the outbreak of the Second World War, Heißmeyer now saw fit to set up the "Dienststelle SS-Obergruppenführer Heißmeyer" – his own bureau – and was thereby responsible for NPEA students' military training. August Heißmeyer took over the General Inspection of the Strengthened SS Totenkopf Standard in 1940 from the outgoing Theodor Eicke, who in 1939 had begun commanding a front line division and therefore gave his supervision over the concentration camps back to the SS Main Leadership Office (SS-Führungshauptamt). Heißmeyer was provisionally in charge of this bureau until May 1942. Then, he left the position to the new "concentration camp inspector" SS-Gruppenführer Richard Glücks.

On 14 November 1944, Heißmeyer was given the right to bear the title "General of the Waffen-SS" along with his regular SS rank, thereby affording him a prestigious position in the Waffen-SS. In April 1945, he was given command of Battle Group (Kampfgruppe) Heißmeyer, a collection of Volkssturm (de) and Hitlerjugend tasked with protecting the Spandau airfield during the Battle of Berlin. At the end of April 1945, he escaped with his wife and children.

In the summer of 1945, Gertrud Heißmeyer was briefly detained in a Soviet prisoner of war camp near Magdeburg, but escaped shortly afterwards. With the assistance of Princess Pauline of Württemberg, August and she went into hiding in Bebenhausen near Tübingen. They spent the subsequent three years under the aliases of Heinrich and Maria Stuckebrock.

On 29 February 1948, Heißmeyer was captured by French authorities near Tübingen, and held for trial the following month. He served 18 months in prison before being released in 1949, but the following year he was sentenced by the de-National Socialistfication appeals court to 3 years imprisonment as a "major National Socialist offender" and forfeiture of property. After his release, Heißmeyer went to live in Schwäbisch Hall with his family. He became the director of the West German Coca-Cola bottling plant.

Since 4 August 1923, Heißmeyer was married to Marie, née Lode (d. 23 November 1939). With six children (two sons and four daughters) in his custody, widower Heißmeyer married in March 1940 (other sources claim 6 December 1940) Gertrud Scholtz-Klink – the "Reich Women's Leader" (Reichsfrauenführerin) – who had two previous marriages herself and was mother of six children (one died in an accident, the only child with Dr. Scholtz died at an early age), bringing four into the marriage. Their joint child (Gertrud's seventh), Hartmut Heißmeyer, was born in June 1944. 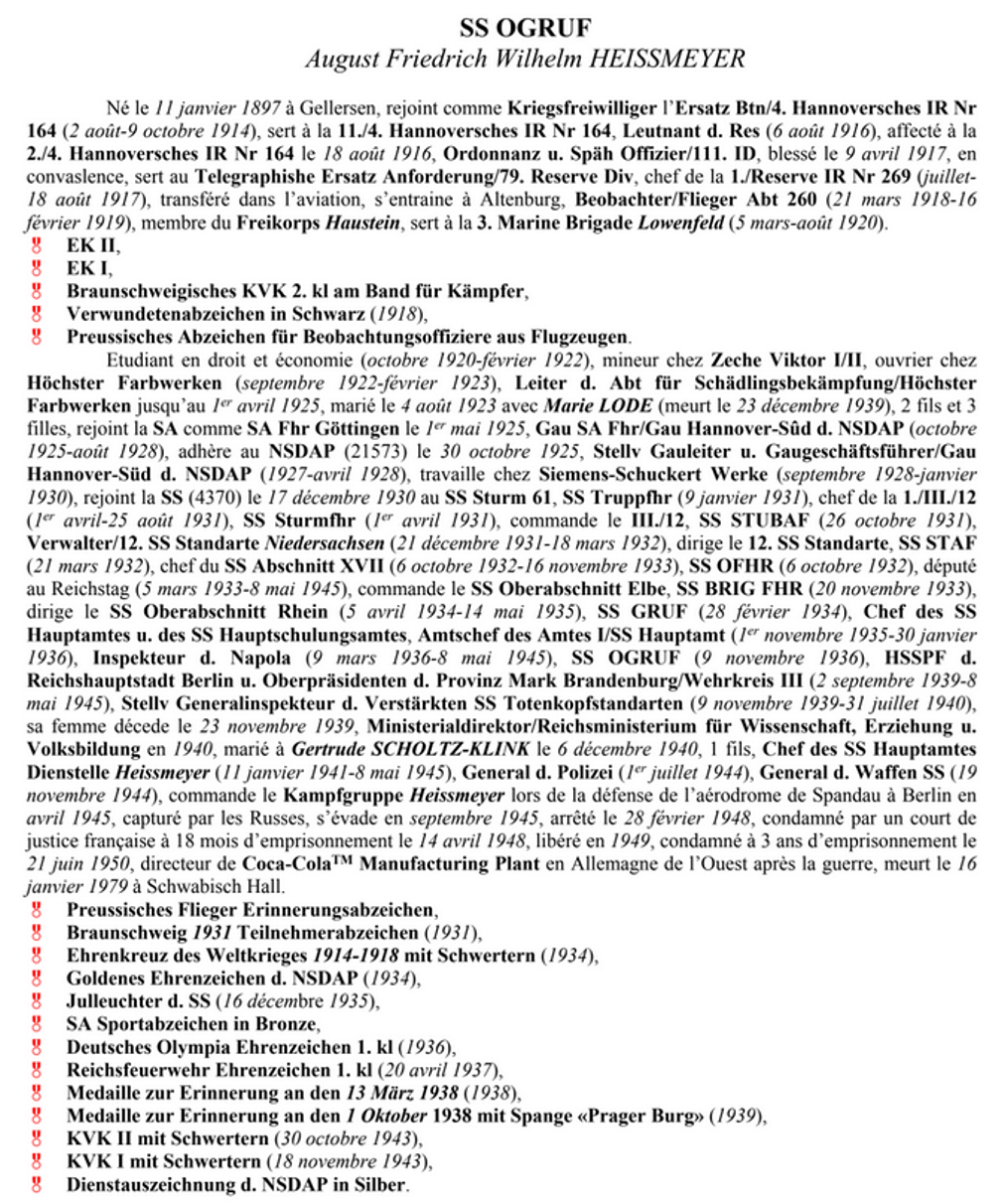