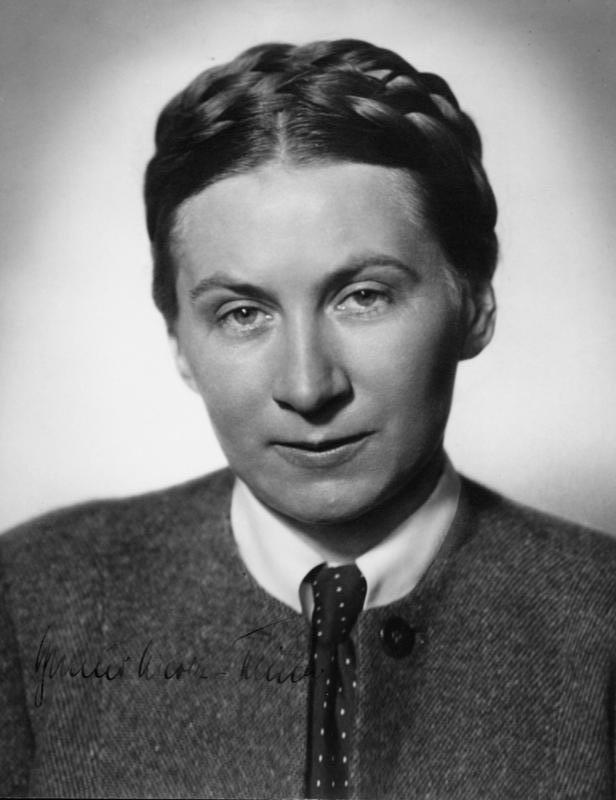 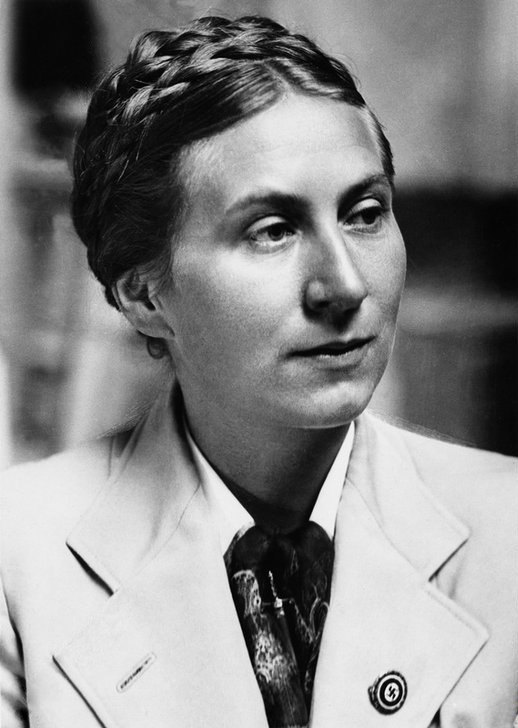 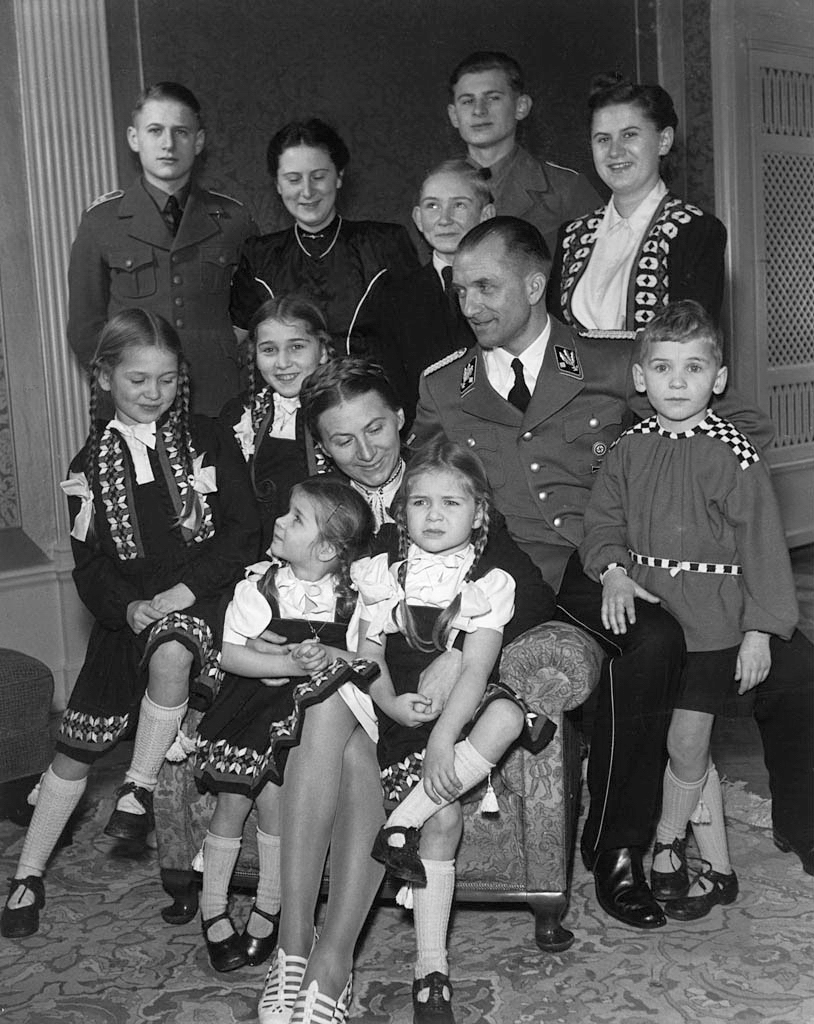 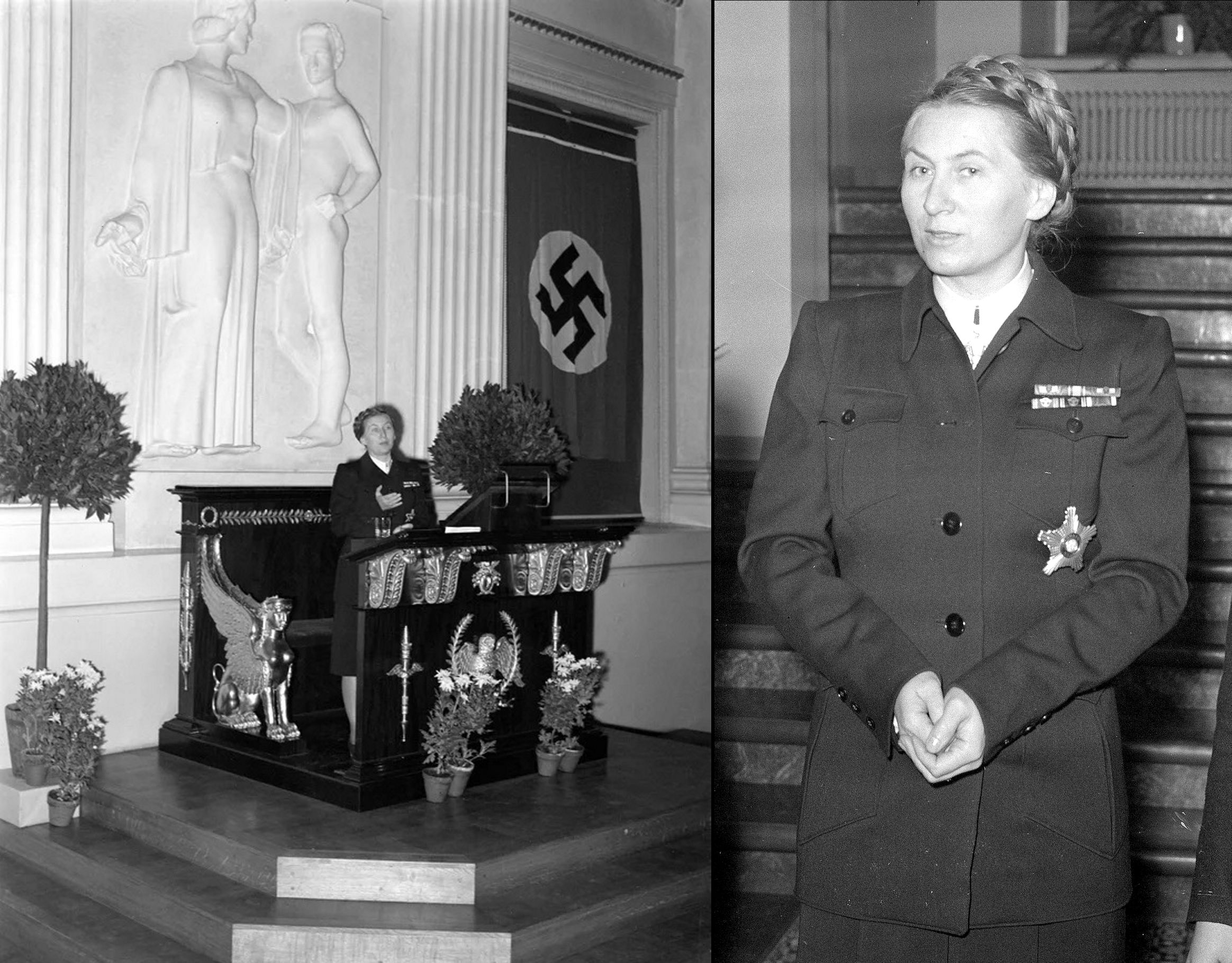 Speech at the University of Helsinki, 1942

Gertrud was born the daughter of Wilhelm Treusch (1866–1910), district surveyor (Bezirksgeometer) in Eberbach, and his wife Berta, née Michaely (1876–1942) in Adelsheim. After completing school and training (Realgymansium; Mittlere Reife), she worked in an officer's family household in Kiel, took a household course in Heidelberg-Handschuhsheim and also helped in her mother's household.

In January 1921, almost at the age of 19, Gertrud married Professor Eugen Friedrich Klink (1894-1930) in Mosbach, a school teacher. Eventually, they had five children (two girls and two boys, including Ernst Klink[1]; the fifth child died in an accident[2]) and eventually Gertrud’s interests expanded from her children to include politics. Attracted by the National Socialist ideology and with her husband’s encouragement, Gertrud joined the NSDAP in 1930 (Nr. 210 782), later changed to September 1929 (Nr. 157 007). She did social work for party members, organizing supporters in Offenburg, and she soon became leader of the women’s section in Berlin. Her husband Klink, also a member of the SA and district speaker for the NSDAP (Kreisredner), died in 1930 of a heart attack.

The rapid advancement of the young teacher's wife in the Baden village of Ried-Dorf Altenheim is astounding and has many reasons. Her talent as an orator contributed to this. She spoke confidently, seemed natural, open-minded, fresh, warm-hearted and womanly. Already from the early years of her public appearance from 1930, the year of her first husband's death, it has been handed down that she captivated the audience when she spoke in the inns of the Ortenau. Her pleasant outward appearance helped her to win sympathy to a degree that should not be underestimated. The decisive impetus for her national career may have come from her friendship with Robert Wagner, who later became Gauleiter of Baden.

In Februay 1932 (other sources wrongly claim 1936[3]), widow Klink married Dr. med. Günther Scholtz (b. 1899), a country doctor (their child died very young; divorced in 1937) and member of the Reichsarbeitsdienst. In 1934 Adolf Hitler appointed Scholtz-Klink as "Reich Women's Leader" (Reichsfrauenführerin) and head of the National Socialist Women's League. She was a good orator, and her main task was to promote the nuclear family, the joys of home labour and the importance of child-bearing.

Despite her own position, Scholtz-Klink spoke against the participation of women in politics, and took the female politicians in Germany of the Weimar Republic as a bad example:

"Anyone who has seen the Communist and Social Democratic women scream on the street and in the parliament, will realize that such an activity is not something which is done by a true woman."

Scholtz-Klink was usually left out of the more important meetings of the Third Reich. She did, however, have the influence over women in the party as Hitler had over everyone else.

In March 1940 (other sources claim 6 December 1940), Scholtz-Klink married her third husband SS-Obergruppenführer August Heissmeyer. He brought six children into the marriage. In June 1944, their own son, Hartmut, was born.

At the end of World War II in Europe, Gertrud (Maria Stuckebrock) and August (Heinrich Stuckebrock) fled from the Battle of Berlin. After the fall of National Socialist Germany, in the summer of 1945, she was briefly detained in a Soviet prisoner of war camp near Magdeburg, but escaped shortly afterwards. With the assistance of Princess Pauline of Württemberg, she and her third husband went into hiding in Bebenhausen near Tübingen. They spent the subsequent three years under the aliases of Heinrich and Maria Stuckebrock. On 28 February 1948, the couple were identified and arrested. A French military court sentenced Scholtz-Klink to 18 months in prison on the charge of forging documents.

In May 1950, a review of her sentence classified her as a "main culprit" and a German denazification court sentenced her to an additional 30 months. In addition, the court imposed a fine and banned her from political and trade union activity, journalism and teaching for ten years. After her release from prison in 1953, Scholtz-Klink settled back in Bebenhausen.

In her 1978 book Die Frau im Dritten Reich ("The Woman in the Third Reich"), Scholtz-Klink demonstrated her continuing support for the National Socialist ideology. She once again upheld her position on National Socialism in an interview with historian Claudia Koonz in the early 1980s.

In May of 1945, the Allied forces defeated the Third Reich, and Gertrud and her husband fled Berlin. As they traveled, she was caught in the crossfire between German and American troops and wounded five times. The Soviets briefly held Gertrud and August in a prisoner of war camp, but they managed to escape and she and her husband picked up their youngest child and made their way to Nazi sympathizer Princess Pauline of Wurtemberg in Bebenhausen Castle. The Princess later said that she cared for Frau Heissmeyer “as one would help a wounded animal.” Gertrud and her husband had hidden in plain sight in the rooms of Bebenhausen Castle for three years, but now once again, their enemies had discovered their hiding place. The German, French, and American police force arrested the two former Nazi leaders and led them away. The authorities also arrested Pauline, Princess of Wurtemberg, 71, who had helped them escape the Soviets and settled them in Bebenhausen, which had been part of her kingdom. The princess left prison on bail, but the United States authorities took charge of the fugitive Heissmeyers who both faced trials and de-nazification. [...] After Gertrud Scholtz-Klink and August Heissmeyer were arrested in their Bebenhausen Castle quarters in February 1948, a French military court charged her with forging documents and sentenced her to 18 months in prison. In May 1950, a German de-nazification court sentenced her to thirty more months in prison, fined her and imposed a lifetime ban on political and trade union activity. The court prohibited her from working as a journalist or teacher for ten years. Throughout her trials, Gertrud remained steadfastly committed to her Nazi beliefs. Her prison sentence completed in 1953, Gertrud returned to Bebenhausen Castle and lived quietly there for the rest of her life. In 1978, she wrote a book called The Woman in the Third Reich, which she dedicated to the “victims of the Nuremburg trials.” In a 1936 speech Gertrud said, “German women of all classes and organizations stand before the Führer at the beginning of the new year and thank him for preserving the life of our people, and for helping it to find itself again.” For the rest of her life, Gertrud lived these lines and she showed her continued support for National Socialist ideology. In the 1980s, she defended her National Socialist beliefs in an interview with historian Claudia Koonz and continued to defend and live her National Socialist beliefs until her death on March 24, 1999.[4]

Gertrud Heißmeyer[5] died on 24 March, 1999, in Bebenhausen, an outlying district of Tübingen, Germany.