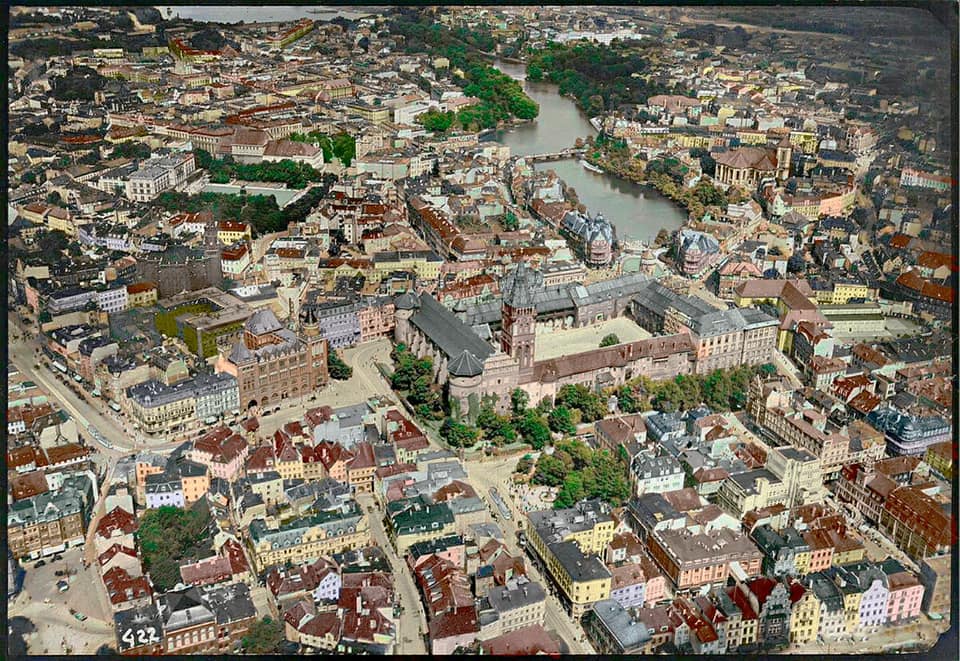 Königsberg before the bombings. 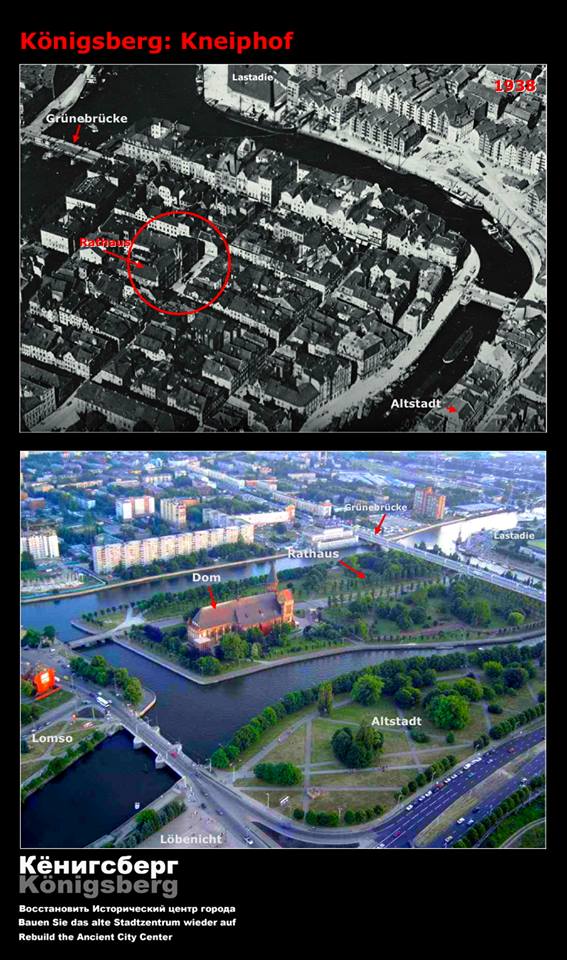 Before & after, showing the island, & Aldstadt - oldest part of the city, with the Rathaus, circled (top), and marked (below) with the restored cathedral. Everything else is destroyed.

The Bombing of Königsberg was a series of attacks made on Königsberg, the capital city of East Prussia, during World War II.

On the night of June 22/23, 1941 a Soviet Air Force Ilyushin DB-3 long range bomber carried out a raid on Konigsberg, causing minor damage to the gas plant and the wharf facilities. That was followed on August 29 with another attack on the city by two Soviet four-engined Petlyakov Pe-8 bombers, the pilots being Commander I.S. Lisatschow and Major O. Fedorenko. The Soviets returned on September 1st, this time with two TB-7 and two Ermolaev Jer-2 middle-distance bombers. A third TB-7 had to turn back at Memel. In June and August 1942 there were four Soviet attacks by naval aircraft from the Soviet Baltic Fleet. On the nights of April 10/11 and 29/30, 1943, there were further Soviet air attacks, and on the latter night 5000 kg of bombs were dropped. In all these attacks there was modest destruction of buildings and few deaths.

By far the most destructive raids of World War II on Konigsberg were by the British Royal Air Force, one of the many German cities targeted by them for the indiscriminate firebombing of civilian populations and destruction of 1000 years of Europe's architectural heritage and history in what can only be described as true war crimes. On the night of August 26/27 1944, No.5 Group of the RAF with two Royal Australian Air Force Squadrons, 463 and 467, consisting of 174 Avro-Lancaster bombers, at the extreme of their range (950 miles from base) attacked the city.[1] Poor weather conditions meant that most of the relatively small bombs fell in the north-east of the city in Maraunenhof, between Cranzer Avenue, Duke Albrecht Avenue and the Wall Ring. 10,000 were left homeless and 1000 people were killed. Four of the aircraft were lost.[2]

Three days later, however, on the night of August 29/30, R.A.F. No.5 Group returned with 189 Avro-Lancaster bombers under the command of Wing Commander J. Woodroffe and dropped 480 tons of bombs on the city after waiting 20 minutes for a gap in the clouds, despite being short on fuel. This permitted the local Luftwaffe to get night-fighters into the air and they brought down 15 Lancasters, about 8% of the attacking force. This was a devastating bombing. Estimates by the R.A.F., were that 20% of industry (must include river and canal dock facilities) and 41% of housing was destroyed. The fire-storms hurricane made an escape from cellars impossible and civilians were burnt alive. The Old City (Altstadt) which dated from the 1200s, was destroyed.

Almost all the city's historic buildings with their irreplaceable interiors were destroyed, including the cathedral (1333) and twelve other churches. (The Altstadt Kirche , rebuilt 1839-43 by the great architect Schinkel, contained the tomb of Hans Luther (d.1575), the eldest son of the Reformer), castle (1255), and Royal Palace (15th-18th centuries and part of the castle), the main university buildings, new (Renaissance style, by Stuler, 1862), and old (1544) - where Immanuel Kant taught, the museums, the Town Hall, the Opera House, the Landeshous, with its famous frescoes by Brausewetter, Noster, etc., and the State and University libraries. Many houses which were birthplaces of famous Konigsbergers were also destroyed. The city burned for several days.

Over 200,000 were made homeless, and over 5000 bodies collected were buried in a mass grave. Ironically, the barracks, fortresses and the railway facilities were undamaged, showing that these were primarily terror raids.[3]

The German-Jewish author and musician Michael Wieck, a native of Königsberg, wrote in A Childhood Under Hitler and Stalin:

"The people of Königsberg shall never expunge these nights of terror from their memory."

On both attacks the RAF crossed on their return flights the Swedish province of Scania, and at least one bomber, damaged by AA defences was forced to land there, a violation of Sweden's neutrality.

During the final prolonged battle for Konigsberg in 1945, "Festung (fortress) Königsberg" was again heavily bombed. In April a third of the Soviet Air Force focused on the Konigsberg region and led to incessant bombing and attacks by low-flying aircraft over the city. Air defences by this time were non-existant. There was severe damage to the 19th and 20th century parts of the city/suburbs.