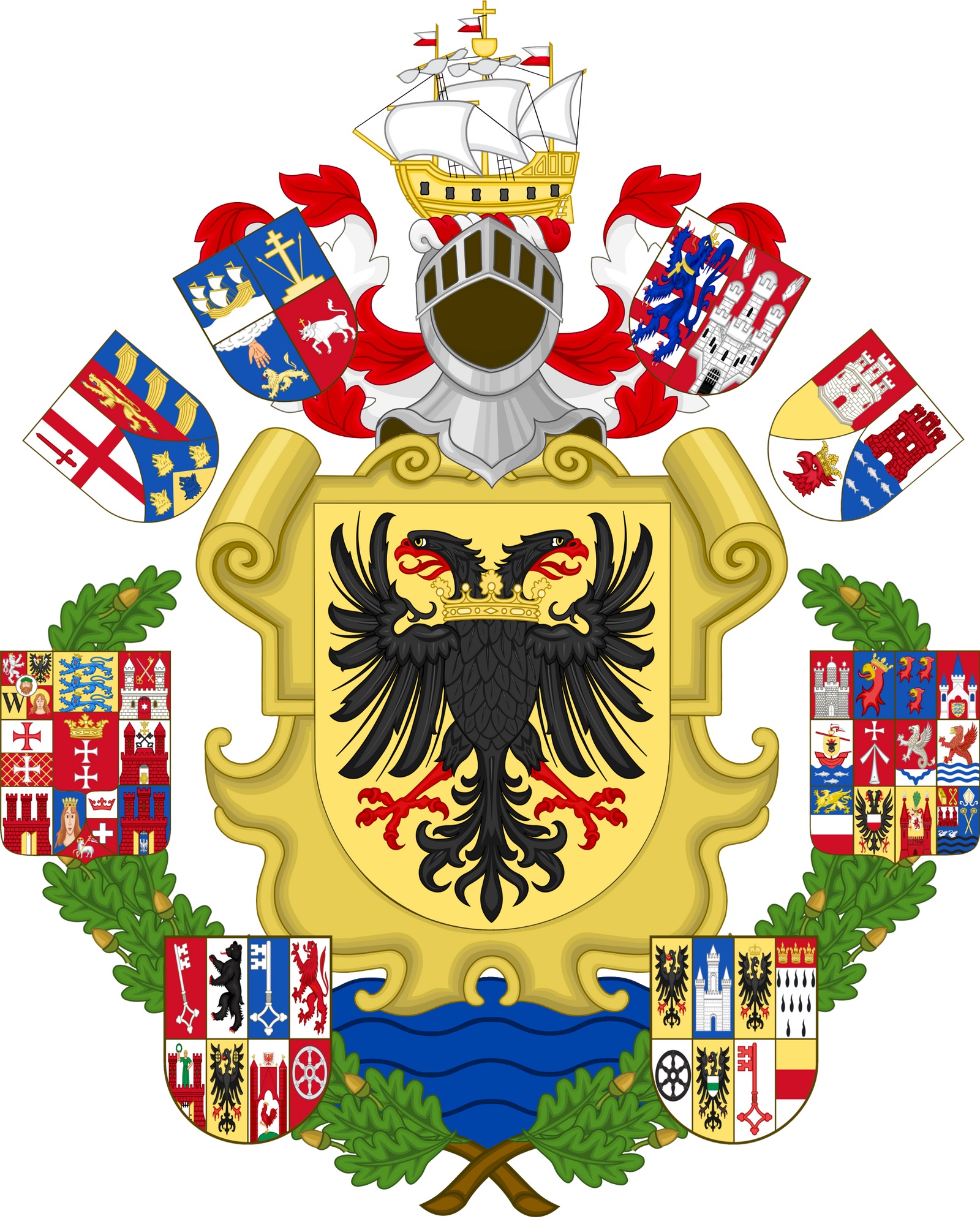 Coat of Arms of the Hanseatic League (center), surrounded by the different Kontors of the league throughout Europe and the others are member cities of the League, sorted after the four different quarters (from left to right: Baltic, Saxon, Westphalian, Wendish).[1]

The Hanseatic League with it's loosely aligned confederation of city-states lacked a permanent administrative body, treasury, and standing military force (although many paid soldiers and a heavily armed merchant fleet); only a very small number of members enjoyed autonomy and liberties comparable to those of neighboring free imperial cities of the Holy Roman Empire of the German Nation. It managed to endure and thrive for centuries (1356-1862) under a quasi-legislative diet (Hansetage) that operated on deliberation and consensus and is described as the most successful trade alliance in history.

Hamburg, Bremen and Lübeck remained as the only members until the League's demise in 1862 as part of the German Confederation, on the eve of the 1867 founding of the North German Confederation and the 1871 founding of the German Empire under Kaiser Wilhelm I. Today, these three cities are the only ones that retain the words "Hanseatic City" (Hansestadt) in their official German titles. Since the German Reunification 1990 other German cities have officially added the historic suffix "Hanseatic City": Rostock, Wismar, Stralsund, Greifswald, Anklam, Demmin, Lüneburg, Salzwedel, Gardelegen, Havelberg, Osterburg, Werben, Seehausen, Stade, Stendal, Wipperfürth, Warburg, Attendorn, Breckerfeld, Medebach, Korbach, Herford, Buxtehude and Uelzen. 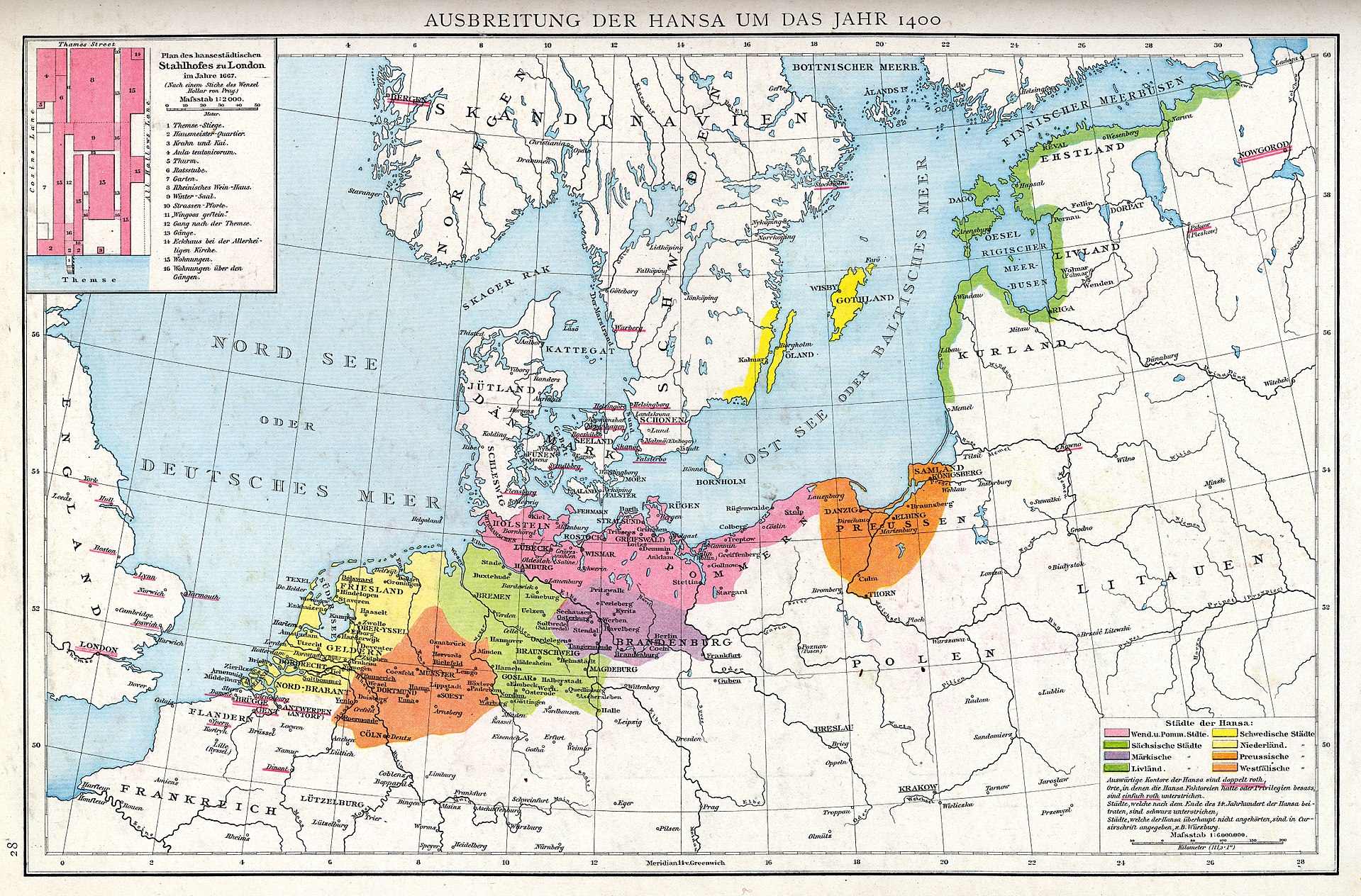 The spread of the Hanseatic League in the year 1400 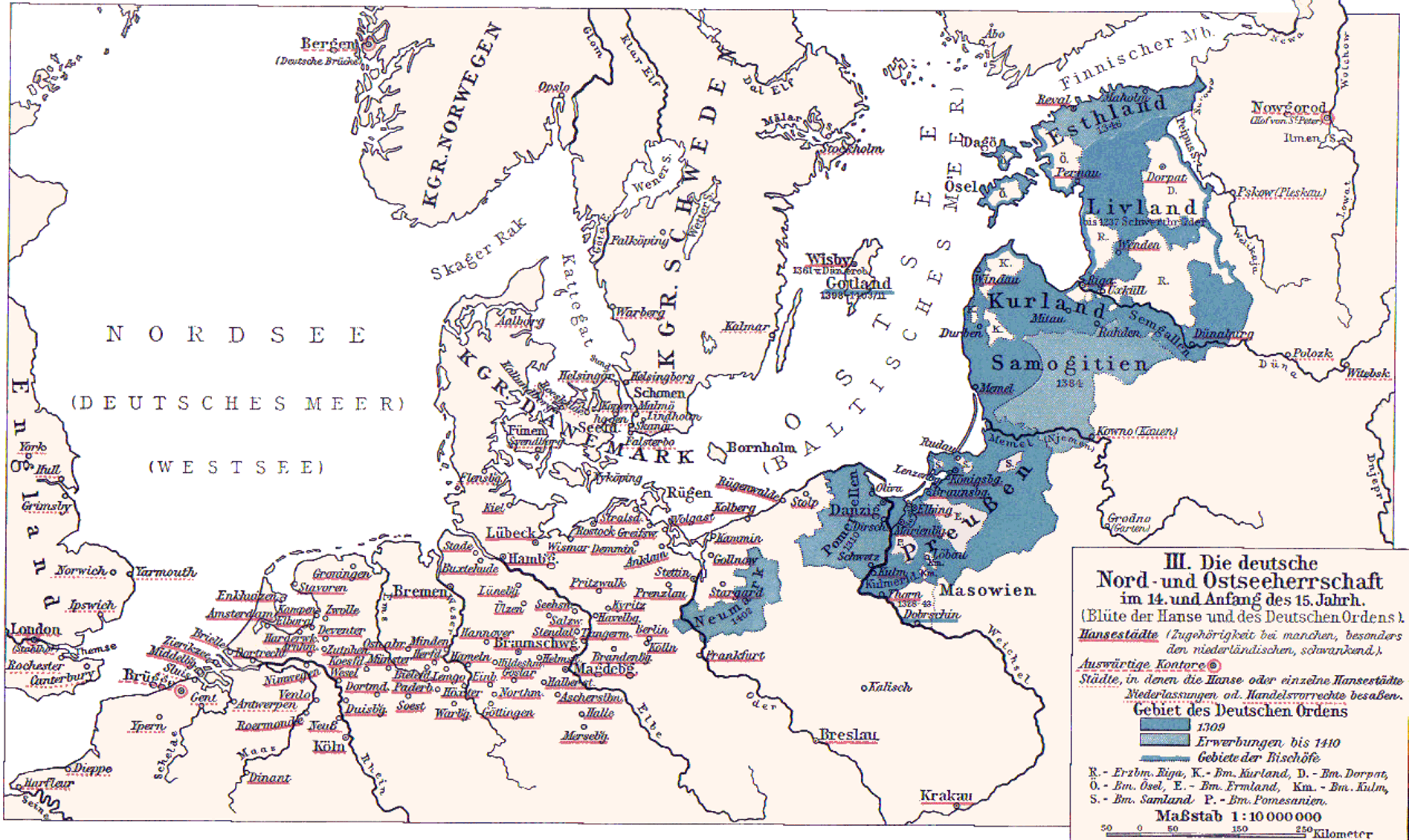 This map depicts German rule of North and Baltic Sea in 14th and early 15th century during the height of Hanseatic League and Teutonic Order.

Growing from a few north German towns in the late 12th century (c. 1184; first agreement between Lübeck and Hamburg c. 1230), the League ultimately encompassed nearly 200 cities and towns; at its height between the 13th and 15th centuries, it stretched from the England in the west to Russia in the east, and from Estonia in the north to Kraków, Poland in the south.[3]

The Hanseatic League (also known as Hansa, Hanse, 1356-1862 CE) was a federation of north German towns and cities formed in the 12th century CE to facilitate trade and protect mutual interests. The league was centered in the German town of Lübeck and included other German principalities which established trade centers ranging from Kievan Rus through the Netherlands, Scandinavia, and Britain. The league steadily grew in power throughout the 13th century CE and was formally founded as a multi-city trade league in 1356 CE. By the time of its formal founding it had already established a monopoly on trade in the Baltic region through their center on Gotland island in Sweden. From Gotland, the Hanseatic League was able to make firm trade alliances and secure even more lucrative arrangements with other nations. By setting aside their personal agendas, and working for communal best interests, members of the league were able to make substantial profits until the 15th century CE when their power began to wane. This decline was caused by a number of factors including economic depression, increased power of non-Hanseatic merchants and the nobility which backed them, a depletion of various resources, the plague of the late 14th century CE, and climate change which shortened growing seasons. By the 17th century CE, the league had diminished in numbers and power to be almost inconsequential, and it was dissolved in the 19th century CE. [...] The league provided much-needed protection for its members not only from hostile political rivals but from robbery by thieves on land or at sea. Crime in the middle ages was rampant owing to the various governments' inability – or unwillingness – to apprehend and prosecute criminals. [...] The league addressed this situation by forming their own military guards to protect their interests in land travel and made sure that heavily armed transports accompanied their vessels on sea voyages. [...] The members of the league traded in copper, fish, flax, furs, grain, honey, iron, resin, salt, and textiles, among other goods. Lübeck – the so-called “Queen of the Hanseatic League” – continued as the lead city and amassed considerable wealth. Free cities (such as Lübeck) were obligated only to the Holy Roman Empire which had conferred their status as such and so owed nothing to local authorities of cities outside the league that might object to their ambitions. Probably the best example of the league's power is its nine-year war with King Waldemar IV of Denmark (r. 1340-1375 CE) and his ally and son-in-law Haakon VI of Norway (r. 1343-1380 CE). The league was powerful enough to wage war on Denmark in 1361-1370 CE, emerging victorious and able to dictate terms which gave them free reign in trade throughout Scandinavia. Further military conflicts with Denmark afterwards only consolidated their power.[4]

The League, the Old High German word Hanse meant “crowd” or “community”, originated from various loose associations of German traders and towns formed to advance mutual commercial interests, as well as protection against piracy and banditry. These arrangements gradually coalesced into the Hanseatic League, whose traders enjoyed duty-free trade, protection, and diplomatic privileges in affiliated communities and their trade routes. Hanseatic cities gradually developed a common German legal system governing their towns, merchants and goods, even operating their own armies for mutual defense and aid.

Reduced barriers to trade resulted in mutual prosperity, which fostered economic interdependence, kinship ties between merchant families, and deeper political integration; these factors solidified the League into a cohesive political organization by the end of the 13th century.[5] In other ports, towns and cities which were not essentially Hanseatic, the League had a significant trading presence with their own wharves and warehouses, consulates and administrative offices.

At the peak of its power, the Hanseatic League's maritime trade (c.1300–1800) had a virtual monopoly over general maritime trade in the North and Baltic seas. Its commercial reach extended as far as Portugal, England, Novgorod, and Venice, with trading posts, factories, and mercantile "branches" established in numerous ports, towns and cities across Europe. Hanseatic merchants were widely renowned for their access to a variety of commodities and manufactured goods, subsequently gaining privileges and protections abroad, including extraterritorial districts in foreign realms that operated almost exclusively under Hanseatic laws. This collective economic influence made the League a powerful force, capable of imposing blockades and even waging war against kingdoms and principalities.

The demise of the Hanseatic League, which had survived a great many conflicts, came with the Thirty Years' War, which took place largely within the Holy Roman Empire from 1618 to 1648. It was one of the most destructive wars in European history and caused an estimated 4.5 to 8 million deaths, while some areas of Germany experienced population declines of over 50%.