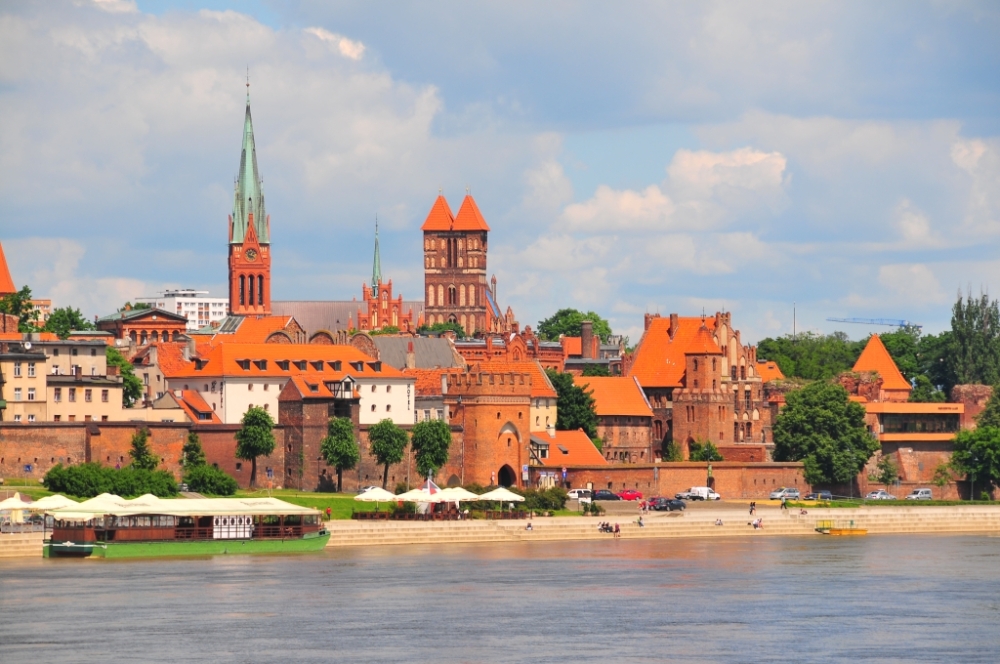 Thorn (Polish Torun) is an ancient city, founded and ruled for over two hundred years by the Teutonic Knights, situated on the river Vistula, and is today capital of the province of Torun in north-central Poland. In 1904 the city had 29,600 inhabitants.[1] In 1982 the estimated population was 180,100[2] although this may cover a hinterland.

Thorn is the oldest city in Prussia. It was allegedly named after the crusader castle in the Barony of Toron in the Holy Land. However all the earliest records spell the town's name Thorn. It was the first settlement in Kulmerland of the Teutonic Order. Kulmerland had been granted and ceded to the Order by Conrad, Duke of Mazovia, in return for the Order conquering and Christianising the pagan Baltic Prussians. In addition, the Holy Roman Emperor Friedrich II, in 1226, had awarded the Order the right of sovereignty over all conquered lands. The foundation stone for the town of Thorn was laid in 1231 by the Order's Landmeister Hermann von Balk. Work commenced immediately on a new castle (strengthened 1240-70) and immigrants from Westphalia populated the town; and on 28 December 1233, in the Kulmer Handfeste, the town was granted German municipal rights.

The present old town sector was laid out in 1236. During the fourteenth century Thorn joined the Hanseatic League and sailed its own merchant fleet, mainly trading with the Netherlands. Becoming very rich it resented the taxation imposed by the Teutonic Order in order to meet their punitive financial penalties in the 1411 peace treaty, and joined the so-called Prussian League, seeking autonomy from the Order. With the war in full swing, in 1454 Thorn fell to Poland whose numerous Polish citizens then destroyed much of the old castle (later rebuilt). Under pressure from the burghers and the Hansa, it was declared a Free City (under Polish sovereignty) in the 1466 Treaty of Thorn imposed against the Order. A succession of Polish kings bestowed upon it economic favours, allowing the town to continue to flourish.[3] It was returned to the Kingdom of Prussia in the Second Partition of the Polish-Lithuanian Commonwealth in 1793.[4] In 1919 it was again removed from Prussia and awarded to the new Poland by the victorious plutocratic western Allies. In World War II it largely escaped damage.

The handsome Rathaus (Town Hall) was built in the 13th, 14th and 16th centuries, but, having suffered a fire, was rebuilt in 1708. On December 7, 1724, the German Burgomaster (Mayor) Rosner, and nine Protestant citizens, were beheaded in front of the Rathaus by order of the Polish government, following religious disturbances in the town, an incident known as the 'Blood Bath of Thorn' ('Thorner Blutbad').[5]

The city Post Office was erected by the Prussian government in the same style as the Rathaus in the 19th century. Next to the old castle stood the Junkerhof. The Church of St. John was built in the 13th and 14th centuries and was an imposing edifice, whose choir in 1904 still contained a fine monumental brass (1360) of Burgomaster Johann von Soest and his wife. The Church of St. Mary (Marien-Kirche), of the same period: in a recess to the left of the high altar is the tomb of a Swedish princess who died in Thorn in 1625. The Church of St. James is a handsome Prussian brick building of the early 14th century with two towers. The finely carved organ-loft dates from 1611.[6]

The two Treaties of Thorn, imposed upon the Teutonic Order by a victorious Poland-Lithuania, who had engineered both wars, were signed here in 1411 and 1466.

Thorn was a major railway junction in the Prussian railway network, and remains so today. Before World War II the Berlin via Posen to Insterberg and Eydtkuhnen (East Prussia) Express stopped here. Ten miles from Thorn is Kulm, another ancient stronghold of the Teutonic Order on the right bank of the Vistula, also ceded to them by Conrad, the Duke of Mazovia, in 1230.