From Metapedia
(Redirected from Joseph Ratzinger)
Jump to: navigation, search 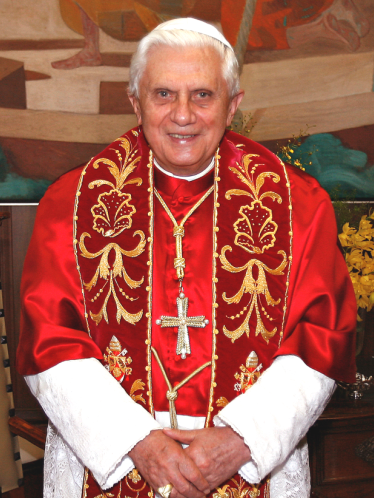 Pope Benedict XVI (born 16 April 1927), originally named Joseph Alois Ratzinger, was pope between 2005 and 2013. Exceptionally, he resigned as pope before his death due to deteriorating health, choosing to be known by the title "Pope Emeritus" upon his resignation. He was replaced by Pope Francis. The status as pope is disputed by some traditional Catholics such as sedevacantists. Even before becoming Pope, he was one of the most influential men in the Roman Curia, and was a close associate of John Paul II.

Born in 1927 in Marktl am Inn, Bavaria, Germany, Ratzinger had a distinguished career as a university theologian before being appointed Archbishop of Munich and Freising by Pope Paul VI (1963–78). Shortly afterwards, he was made a cardinal in the consistory of June 27, 1977. He was appointed Prefect of the Congregation for the Doctrine of the Faith by Pope John Paul II in 1981 and was also assigned the honorific title of the cardinal bishop of Velletri-Segni on April 5, 1993. In 1998, he was elected sub-dean of the College of Cardinals. And on November 30, 2002, he was elected dean, taking, as is customary, the title of Cardinal bishop of the suburbicarian diocese of Ostia. He was the first Dean of the College elected Pope since Paul IV (1555–59) and the first cardinal bishop elected Pope since Pius VIII (1829–30).

Even before becoming Pope, Ratzinger was one of the most influential men in the Roman Curia, and was a close associate of John Paul II. As Dean of the College of Cardinals, he presided over the funeral of John Paul II and over the Mass immediately preceding the 2005 conclave in which he was elected. During the service, he called on the assembled cardinals to hold fast to the doctrine of the faith. He was the public face of the church in the sede vacante period, although, technically, he ranked below the camerlengo in administrative authority during that time. Like his predecessor, Benedict XVI maintains the traditional Catholic doctrines on artificial birth control, abortion and homosexuality.

As well as his native German, Benedict XVI fluently speaks Italian, French, English, Spanish and Latin, and has a knowledge of Portuguese. He can read Ancient Greek and biblical Hebrew. He is a member of a large number of academies, such as the French Académie des sciences morales et politiques. He plays the piano and has a preference for Mozart and Bach.

The pope's relatives agree that his priestly vocation was apparent from boyhood. At the age of five, Ratzinger was in a group of children who welcomed the visiting Cardinal Archbishop of Munich with flowers. Struck by the Cardinal's distinctive garb, he later announced the very same day that he wanted to be a cardinal.

Following his fourteenth birthday in 1941, Ratzinger was enrolled in the Hitler Youth — membership being legally required after December 1939 — but was an unenthusiastic member and allegedly refused to attend meetings. His father was a bitter enemy of "Nazism", believing it conflicted with the Catholic faith. In 1943 while still in seminary, he was drafted at age 16 as a Flakhelfer into the German anti-aircraft corps of the Luftwaffe. Ratzinger then trained in the German infantry, but a subsequent illness precluded him from the usual rigours of military duty. As the Allied front drew closer to his post in 1945, he deserted back to his family's home in Traunstein after his unit had ceased to exist, just as American troops established their headquarters in the Ratzinger household. As a German soldier, he was put in a POW camp but was released a few months later at the end of the War in summer 1945. He reentered the seminary, along with his brother Georg, in November of that year.

Following repatriation in 1945, the two brothers entered Saint Michael Seminary in Traunstein, later studying at the Ducal Georgianum (Herzogliches Georgianum) of the Ludwig-Maximilian University in Munich. They were both ordained in Freising on June 29, 1951 by Cardinal Michael von Faulhaber of Munich. Joseph Ratzinger's dissertation (1953) was on St. Augustine and was entitled "The People and the House of God in Augustine's Doctrine of the Church". His Habilitation (which qualified him for a professorship) was on Bonaventure. It was completed in 1957 and he became a professor of Freising College in 1958.

Benedict XVI is a well-known modernist Catholic theologian and a prolific author. He served as a professor at various German universities and was a theological consultant at the Second Vatican Council before becoming Archbishop of Munich and Freising and Cardinal. At the time of his election as Pope, Benedict had been Prefect of the Congregation for the Doctrine of the Faith (curial heads lose their positions upon the death of a pope[2]) and was Dean of the College of Cardinals.

During his papacy, Benedict XVI has emphasized what he sees as a need for Europe to return to fundamental Christian values in response to increasing de-Christianization and secularization in many developed countries. For this reason, he claims relativism's denial of objective truth—and more particularly, the denial of moral truths—as the central problem of the 21st century. He teaches the importance for the Catholic Church and for humanity of contemplating God's salvific love and has reaffirmed the "importance of prayer in the face of the activism and the growing secularism of many Christians engaged in charitable work."

After having been appointed pope, he wrote a response to Nietzsche's claim that Christianity has ruined some of human natural feelings.

Everything that John Paul did had to have the acquiescence of Benedict who was then Cardinal Ratzinger, the keeper of the faith. Any changes or nuance in the dogma had to have Ratzinger's approval. Its a different style, its a different ethnicity, but whats important about Benedict is that he institutionalised the things that John Paul did in changing the relationship between Jewish people and the Catholic world. He follows in his footsteps; he visited the synagogue in Rome, in every country that he goes he visits a synagogue, he meets with the Jewish community. People are criticising his style not the substance of the relationship. If you look at the history of antisemitism; the most dramatic change in two-thousand years is the change in the attitude between the Catholic Church and Judaism.
—Abraham Foxman, National Director of the Anti-Defamation League.[1]