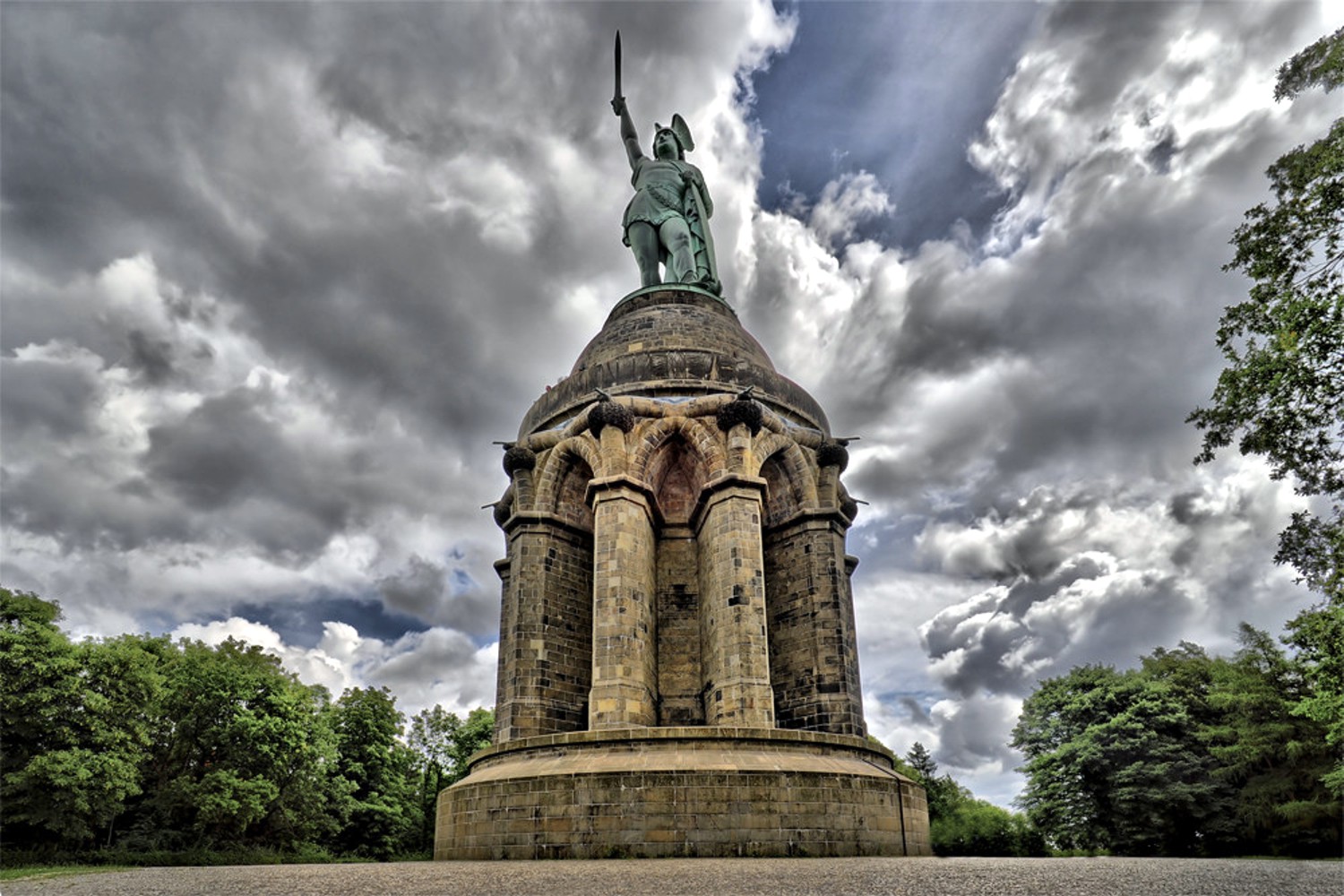 Hermann Monument (Hermannsdenkmal) in Germany; "The Germanic Spirit is the Spirit of Freedom." (Hegel)

Hermann (also Armin, Latinized Arminius) (17 B.C.-A.D. 21) was a chieftain of the Germanic Cherusci who defeated three Roman legions in the Battle of the Teutoburg Forest (German: Hermannsschlacht). Hermann's influence held an allied coalition of Germanic tribes together in opposition to the Romans. His victory against the Roman legions in the Teutoburg forest had a far-reaching effect on the subsequent history of both the ancient Germanic peoples and on the Roman Empire. The Romans were to make no more concerted attempts to conquer and permanently hold Germania beyond the river Rhine.

Hermann is to this day a German national hero and a symbol of the German will for freedom. 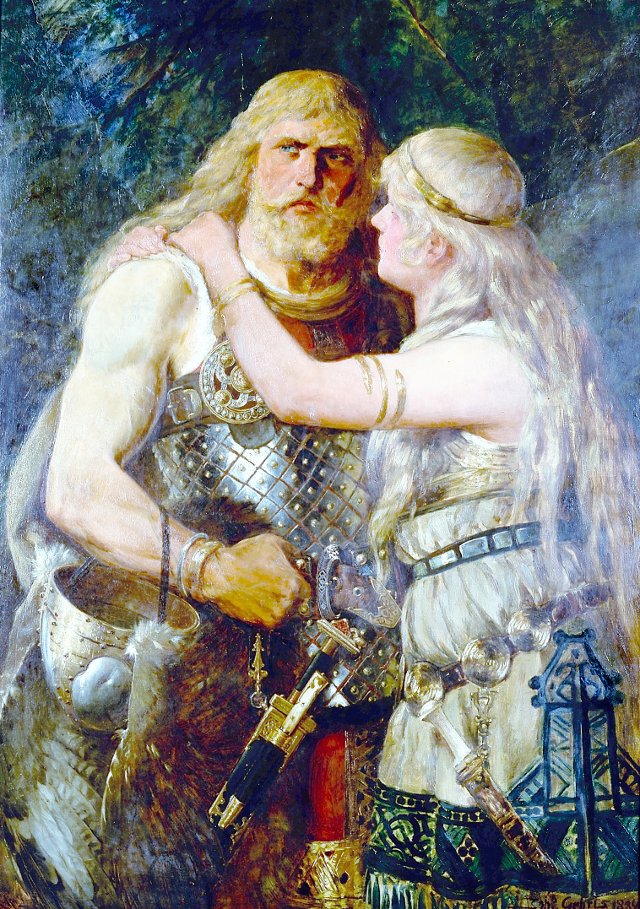 Hermann bids farewell to his love Thusnelda before the Battle of the Teutoburg Forest.

Hermann was a noble son of Segimer, a prince of the tribe of the Cherusci. Hermann had lived in Rome as a hostage in his youth, where he had received a military education, and even been given the rank of Equestrian. During his absence Segimer (Segimerus) was declared a coward by other Germanic chieftains because he had bowed down to Roman rule – a crime punishable by death under Germanic law.

Hermann served with distinction as an officer in the Roman armies. Returning to his own people he found them chafing under the yoke of the Roman governor, Quintilius Varus; he entertained for them hopes of freedom, and cautiously inducing neighbouring tribes to join his standard he led the rebellion which broke out in the autumn of AD 9.

Battle of the Teutoburg Forest

In the fall of 9 AD, the 25-year-old Hermann brought to Varus a report of rebellion in Germania (northern Germany). He persuaded Varus to divert the three legions under his command, (composed of the 17th, 18th and 19th legions, plus three cavalry detachments and six cohorts of auxiliaries), from the march to winter quarters to suppress the rebellion. Varus and his legions marched right into the trap Hermann had set for them near Kalkriese, the Battle of the Teutoburg Forest. Hermann's tribe, the Cherusci, and their allies the Marsi, Chatti, Bructeri, Chauci and Sicambri ambushed and annihilated Varus' entire army, totaling over 20,000 men. Recent archaeological finds show the long-debated location of the three-day battle was almost certainly near Kalkriese Hill, about 20 km north of Osnabrück. When defeat was certain, Varus committed suicide by falling on his sword. Arminius' success in destroying three entire legions and driving the Romans out of Germany has been called "the most successful insurrection by an occupied power against a technologically superior, imperialist state in history."[1]

Upon hearing of the defeat, the Emperor Augustus, according to the Roman historian Suetonius in his work De vita Caesarum ("On the Life of the Caesars"), was so shaken by the news that he stood butting his head against the walls of his palace, repeatedly shouting:

"Quintili Vare, legiones redde!“ ('Quintilius Varus, give me back my legions!')

The three legion numbers were never used again by the Romans after this defeat, unlike other legions that were restructured – a case unique in Roman history except for the XXII Deiotariana legion, which may have been disbanded after heavy losses against the Jewish rebels in the Bar Kokba revolt (132–136 CE) in Israel.

Then in A.D. 15 Germanicus Caesar, nephew of the Emperor Tiberius, led the Romans against Arminius, and captured his wife, Thusnelda. An indecisive battle was fought in the Teutoburger Wald, where Germanicus narrowly escaped the fate of Varus, and in the following year Arminius was defeated.

The hero's later years were spent in fighting against Marbod, prince of the Marcomanni, and in disputes with his own people occasioned probably by his desire to found a powerful kingdom. Hermann was assassinated on the orders of rival Germanic chiefs in AD 21.[2] Emperor Tiberius allegedly had refused an earlier offer from a Chatti nobleman to poison Arminius: "It was not by secret treachery but openly and by arms that the people of Rome avenged themselves on their enemies."[3]

In 1875 a great monument to Arminius was completed. This stands on the Grotenburg mountain near Detmold and is one of the most visited monuments in Europe. Klopstock and other poets have used his exploits as material for dramas. Much discussion has taken place with regard to the exact spot in the Teutoburger Wald where the great battle between Arminius and Varus was fought.

Part of this article consists of modified text from the Encyclopædia Britannica Eleventh Edition of 1911, which is no longer restricted by copyright.
Retrieved from "http://en.metapedia.org/m/index.php?title=Hermann&oldid=463181"
Categories: