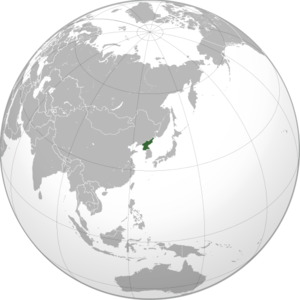 North Korea is a country in East Asia.

North Korea is usually viewed as a harsh Communist dictatorship although it no longer officially describes itself as Marxist–Leninist. The official ideology is the Juche ideology. Kim Il-sung was the country's first Communist dictator, followed by his son Kim Jong-il, and in turn his son, the current dictator Kim Jong-un.