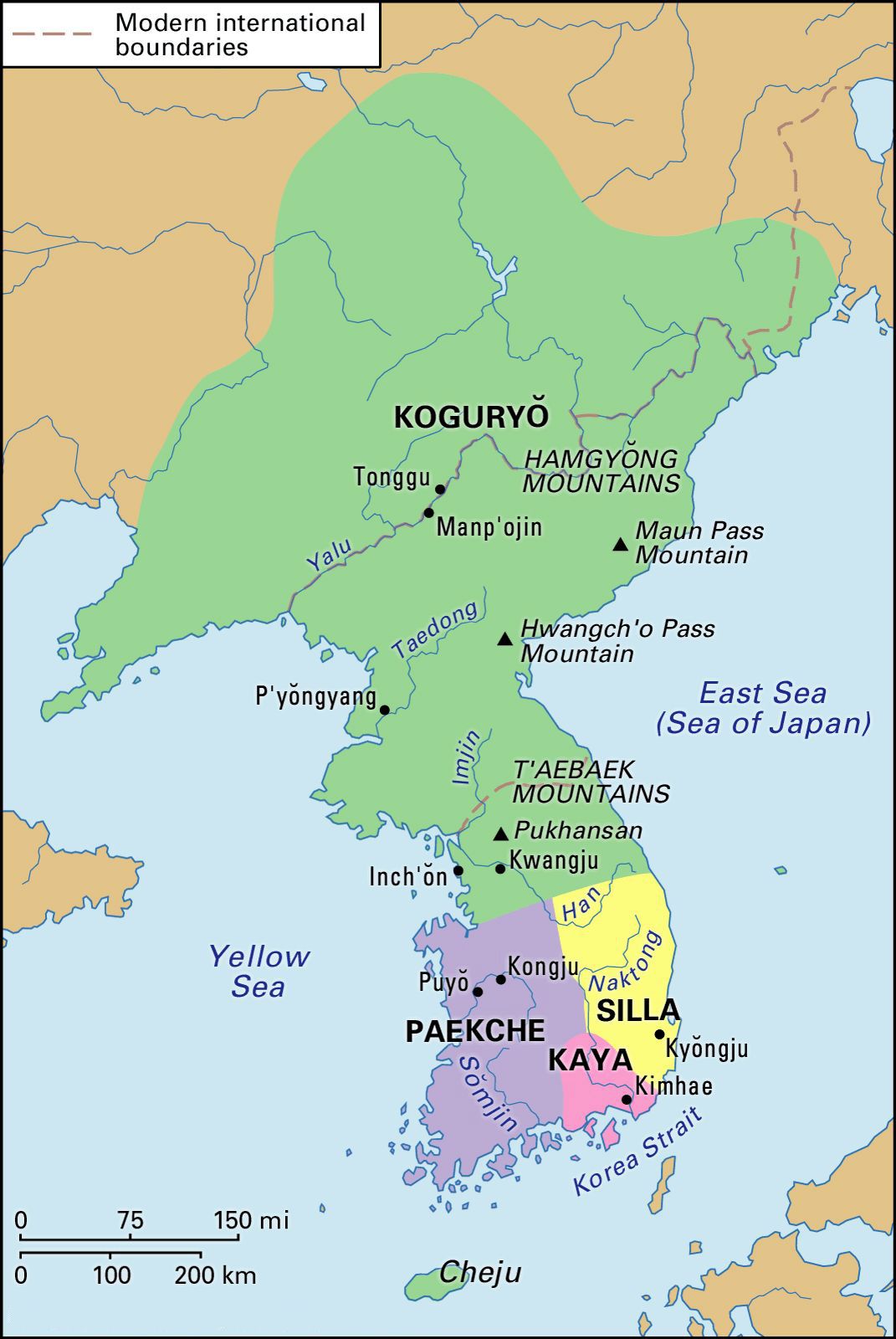 Korea's three kingdoms (Goguryeo, Baekje and Silla; 57 BC to 668 AD); In the 7th century, allied with China under the Tang dynasty, Silla unified the Korean Peninsula for the first time in Korean history, allowing for the first united Korean national identity. After the fall of Baekje and Goguryeo, the Tang dynasty established a short-lived military government to administer parts of the Korean Peninsula. However, as a result of the Silla–Tang War (≈670–676 AD), Silla (joined by Goguryeo and Baekje loyalists) expelled the Protectorate armies from the peninsula in 676 AD. The following period is known as the Unified Silla or Later Silla (668–935 AD). The tail end of this period, called the Later Three Kingdoms period, briefly saw the emergence of the kingdoms of Later Baekje and Taebong, which were really composed of military forces capitalizing on their respective region's historical background, and Silla's submission to the Goryeo dynasty.

Korea is a geographic area composed of two sovereign countries, a civilization, and a former state situated on the Korean Peninsula in East Asia. It borders China to the north-west and Russia to the east, with Mongolia situated farther to the west, and Japan to the east. The Korean Peninsula is divided into two separate states, North Korea and South Korea.

According to Samguk Yusa, the history of Korea began with the founding of Gojoseon in 2333 BC by the legendary Dangun. Limited linguistic evidence suggests probable Altaic origins of these people, whose northern Mongolian steppe culture absorbed migration and trade with the peoples of Manchuria and China. The adoption of the Chinese writing system ("Hanja" in Korean) in the 2nd century BC, and Buddhism in the 4th century AD, had profound effects on the "Three Kingdoms of Korea". Baekje later passed on a modified version of these cultural advances to Japan.[1][2][3][4]

Since the Goryeo Dynasty, Korea was ruled by a single government and maintained political and cultural independence until the nineteenth century, despite the Mongol invasions of the Goryeo Dynasty in the 13th century and Japanese invasions of the Joseon Dynasty in the 16th century. In 1377, Korea produced the Jikji, the world's oldest existing document printed with movable metal type.[5] In the 15th century, the turtle ships, possibly the world's first ironclad warships, were deployed, and King Sejong the Great promulgated the Korean alphabet Hangul to increase literacy among his people who could neither read nor write Hanja (Chinese characters).

During the latter part of the Joseon Dynasty, Korea's isolationist policy earned it the Western nickname the "Hermit Kingdom". By the late 19th century, the country became the object of the colonial designs of Japan and Europe. In 1915, Korea was forcibly annexed by Imperial Japan and remained occupied until the end of World War II in August 1945.

In 1945, the Soviet Union and the United States agreed on the surrender and disarming of Japanese troops in Korea; the Soviet Union accepting the surrender of Japanese weaponry north of the 38th parallel and the United States taking the surrender south of it. This minor decision by allied armies soon became the basis for the division of Korea by the two superpowers, exacerbated by their inability to agree on the terms of Korean independence. The two Cold War rivals then established governments sympathetic to their own ideologies, leading to Korea's current division into two political entities: North Korea and South Korea.