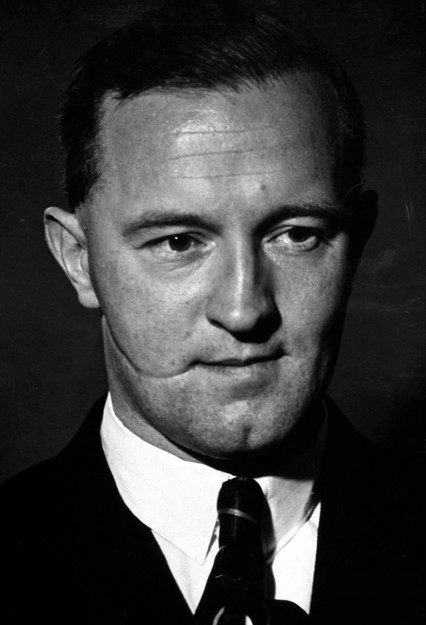 William Brooke Joyce (24 April 1906 – 3 January 1946), nicknamed Lord Haw-Haw, was an American-born member of the British Union of Fascists, the National Socialist League (UK), and the Nordic League. He moved to National Socialist Germany in 1939. He took German citizenship and became a propaganda broadcaster. Despite never being a British subject, Joyce was convicted of high treason in 1945 and sentenced to death.

The historian A.J.P. Taylor remarked in his book English History 1914–1945 that "Technically, Joyce was hanged for making a false statement when applying for a passport, the usual penalty for which is a small fine."

Joyce's biographer Nigel Farndale suggests on the basis of documents made public for the first time between 2000 and 2005 that Joyce made a deal with his prosecutors not to reveal links he had to the MI5, United Kingdom's domestic counter-intelligence and security agency. In return, his wife Margaret, known to radio listeners as "Lady Haw-Haw", was spared prosecution for high treason. "Joyce had also been working as an undercover agent for B5(b), a semi-autonomous department within MI5, responsible for surveillance and infiltration of extremist political groups."[1] 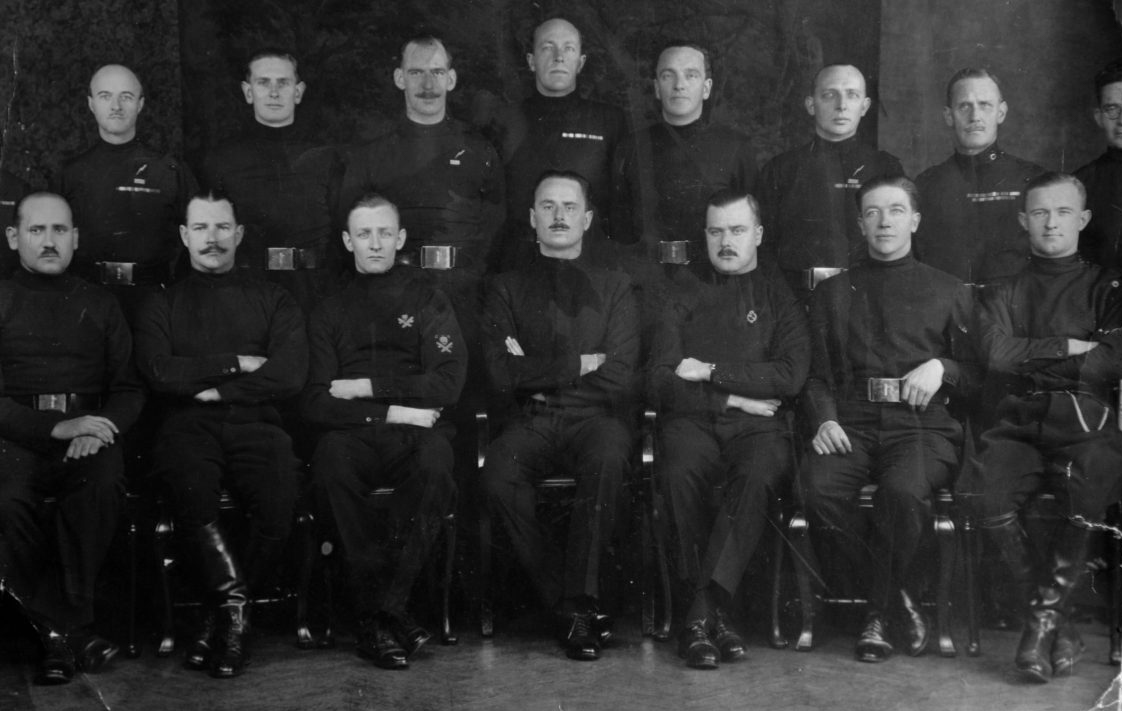 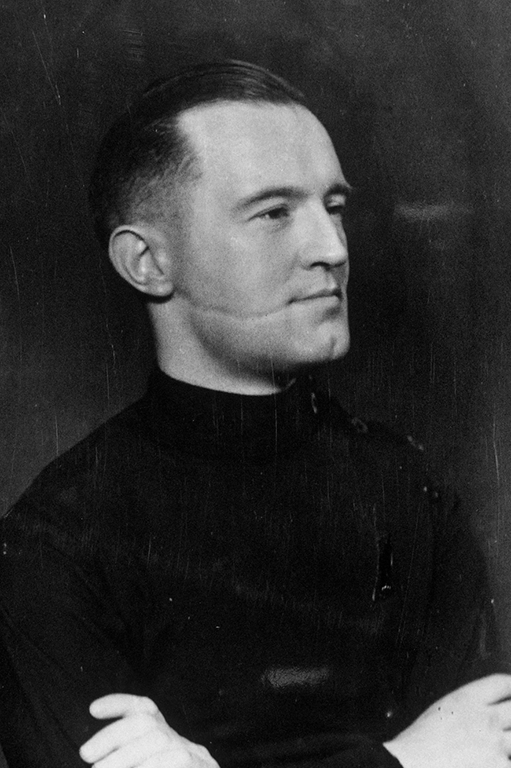 Joyce was born at 1906 Herkimer Street in Brooklyn, New York City, to an English Protestant mother and an Irish Catholic father who had taken United States citizenship. A few years after his birth, the family returned to Galway, Ireland. He attended the Jesuit St Ignatius College (Galway) from 1915 to 1921. Unusually for Irish Roman Catholics, both William Joyce and his father were strongly Unionist.

Following a failed assassination attempt in 1921 (which only failed due to the 16-year old Joyce taking a different route home from school) he left for England where he would briefly attend King's College School, Wimbledon for a foreign exchange, followed two years later by his family. William Joyce applied to Birkbeck College of the University of London and to enter the Officer Training Corps. At Birkbeck, Joyce developed an interest in fascism, and he joined the British Fascisti of Rotha Lintorn-Orman.

In 1924, while stewarding a Conservative Party meeting, Joyce was attacked and received a deep razor slash that ran across his right cheek. It left a permanent scar which ran from the earlobe to the corner of the mouth.

In 1932, Joyce joined the British Union of Fascists (BUF) under Sir Oswald Mosley, and swiftly became a leading speaker. In 1934, Joyce was promoted to the BUF's director of propaganda and later appointed deputy leader. He was instrumental in changing the full name of the BUF to "British Union of Fascists and National Socialists" in 1936, and stood as a party candidate in the 1937 elections to London County Council.

Joyce was sacked from his paid position when Mosley drastically reduced the BUF staff shortly after the elections, and Joyce went on to form a breakaway organisation, the National Socialist League (UK).

In late August 1939, shortly before war was declared on National Socialist Germany, Joyce and his wife Margaret fled to Germany. In Berlin, Joyce could not find employment until a chance meeting with fellow Mosleyite sympathiser Dorothy Eckersley got him an audition at the Rundfunkhaus (radio centre). He was recruited immediately for radio announcements and script writing at German radio's English service.

The name "Lord Haw-Haw of Zeesen" was coined by the pseudonymous Daily Express radio critic Jonah Barrington in 1939, but this referred initially to Wolf Mitler. When Joyce became the best-known propaganda broadcaster, the nickname was transferred to him. Joyce's broadcasts initially came from studios in Berlin, later transferring (due to heavy Allied bombing) to Luxembourg and finally to Apen near Hamburg, and were relayed over a network of German controlled radio stations that included Hamburg, Bremen, Luxembourg, Hilversum, Calais, Oslo and Zeesen. Joyce also broadcast on and wrote scripts for the German Büro Concordia organisation which ran several black propaganda stations.

Joyce recorded his final broadcast on April 30, 1945, during the Battle of Berlin. In an exhausted, possibly intoxicated voice, he chided Britain's role in Germany's imminent defeat and warned that the war would leave Britain poor and barren. (There are conflicting accounts as to whether this last programme was actually transmitted, even though a tape was found in the Radio Hamburg studios.) He signed off with a final defiant "Heil Hitler".

Besides broadcasting, Joyce's duties included distributing propaganda among British prisoners of war, whom he tried to recruit into the British Free Corps. He wrote a book, Twilight Over England, which was promoted by the German Ministry of Propaganda. Adolf Hitler awarded Joyce the War Merit Cross (First and Second Class) for his broadcasts, although they never met in person. 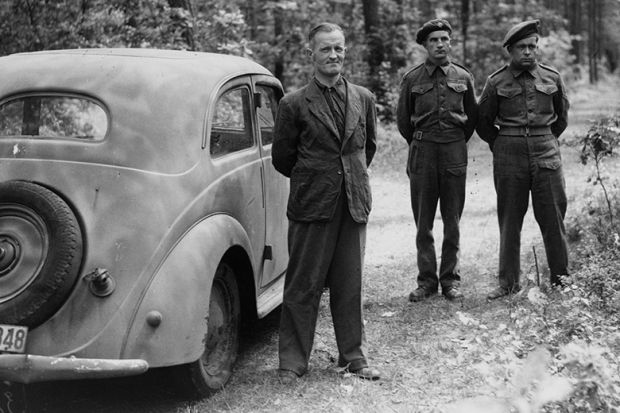 Joyce guarded by Allied soldiers in germany in 1945

At the end of the war, Joyce was captured by British forces at Flensburg near the Germany-Denmark border. After which Joyce was arrested and taken back to Britain. He was charged with high treason.

He went to his death unrepentant and defiant.

“In death as in life, I defy the Jews who caused this last war, and I defy the power of darkness which they represent. I warn the British people against the crushing imperialism of the Soviet Union. May Britain be great once again and the hour of the greatest danger in the West may the standard be raised from the dust, crowned with the words — you have conquered nevertheless. I am proud to die for my ideals and I am sorry for the sons of Britain who have died without knowing why.”[2]

Joyce was executed on January 3, 1946, at Wandsworth Prison, aged 39. He was the second-to-last person to be hanged for a crime other than murder in the United Kingdom. The last was Theodore Schurch who was executed for treachery the following day at Pentonville. In both cases the hangman was Albert Pierrepoint.

The Crown considered trying his wife Margaret as well. It is not entirely clear why no trial took place. A straightforward explanation is that her nationality status was much more complex and a conviction thought unlikely. Some also consider a deal for clemency was made on her behalf, perhaps recorded in a secret memo. Margaret Joyce died in Soho in 1972.

William Joyce had two daughters by his first wife, Hazel. Joyce was reinterred in 1976 at the New Cemetery in Bohermore, County Galway, Ireland.