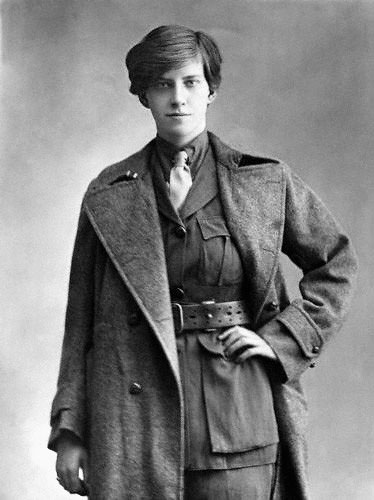 Born in Kensington, London, she was the daughter of Charles Edward Orman, a Major from the Essex Regiment, and her maternal grandfather was Sir John Lintorn Arabin Simmons.

She served in World War I as a member of the Women’s Reserve Ambulance and was decorated for her contribution at the Great Thessaloniki Fire of 1917. She also served with the Scottish Women's Hospital Corps. In these early years she developed a strong sense of British nationalism, and became a staunch monarchist and imperialist. She continued her work in the field of military medicine after the war, becoming head of the Red Cross Motor School to train drivers in the battlefield.

Following her war service, she placed an advert in The Patriot journal seeking anti-communists. This led to the foundation of the British Fascisti in May 1923 as a response to the growing strength of the Labour Party. Financed by her mother, Lintorn-Orman's party nonetheless struggled due to her preference for remaining within the law and her continuing ties to the fringes of the Conservative Party. The party was subject to a number of schisms, such as when the more radical members resigned to form the National Fascisti, and ultimately lost members to the Imperial Fascist League and the British Union of Fascists when these groups emerged. For her part Lintorn-Orman would have nothing to do with the BUF, it was to this group that she lost much of her membership when Neil Francis Hawkins became a member in 1932.