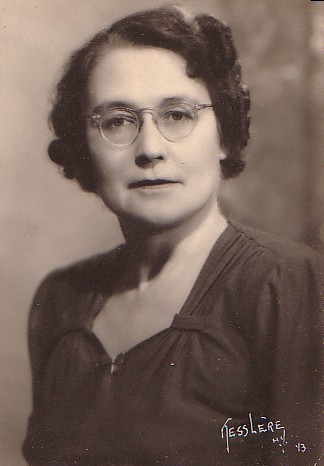 Winifred Utley (23 January 1898 – 21 January 1978), commonly known as Freda Utley, was an English scholar, political activist and best-selling author. After visiting the Soviet Union in 1927 as a trade union activist, she joined the Communist Party of Great Britain in 1928. Later, married and living in Moscow, she quickly became disillusioned with Communism. When her Russian husband, Arcadi Berdichevsky, was arrested in 1936, she escaped to England with her young son. Her husband was executed by firing squad for leading a hunger strike at a Gulag prison labour camp. In 1939, the rest of her family moved to the United States, where she became a leading anti-Communist author and activist.

During WWII, she gave certain support for measures against wars between Germany and Britain/the United States, supported a negotiated peace after this failed, and opposed the demand for Germany's unconditional surrender, possibly because she feared destructive wars between the non-Communists would strengthen the Communist Soviet Union. Also, she supported the Munich Agreement because she asserted that most of the people in the Sudetenland wanted to be part of Germany.

Utley's criticisms of Allied policies in her book The High Cost of Vengeance from 1949 included charges of "crimes against humanity":

Other statements like: "There [is] no crime that the Nazis committed that we or our allies did not also commit ourselves" caused controversy. Utley wrote in The High Cost of Vengeance: "I had referred to our obliteration bombing, the mass expropriation and expulsion from their homes of twelve million Germans on account of their race; the starving of the Germans during the first years of the occupation; the use of prisoners as slave labourers; the Russian concentration camps, and the looting perpetrated by Americans as well as Russians."

Part of this article consists of modified text from Wikipedia, and the article is therefore licensed under GFDL.
Retrieved from "http://en.metapedia.org/m/index.php?title=Freda_Utley&oldid=445570"
Categories: