From Metapedia
(Redirected from General Ludendorff)
Jump to: navigation, search 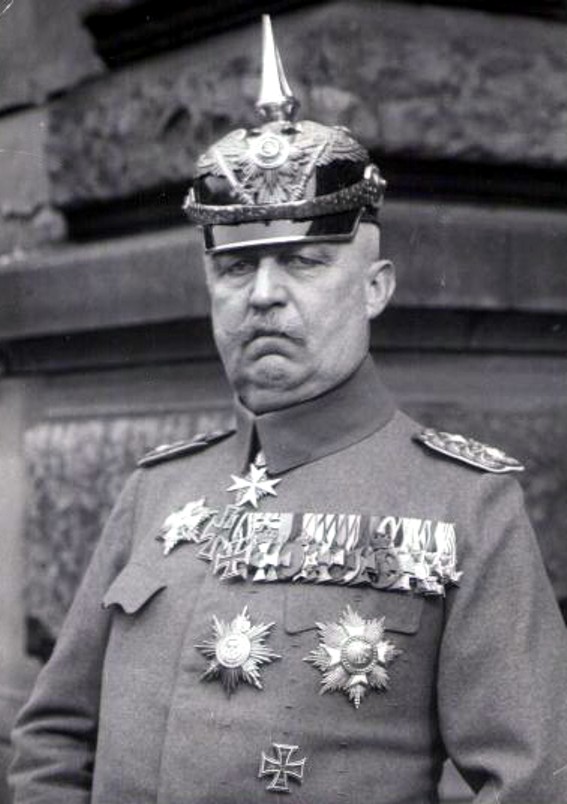 General der Infanterie a. D. Erich Friedrich Wilhelm Ludendorff with the Grand Cross of the Iron Cross, the Pour le Mérite (with oak leaves) and other high decorations.

Erich Friedrich Wilhelm Ludendorff (sometimes given incorrectly as von Ludendorff) (b. 9 April 1865 in Kruschewnia by Schwersenz, Province of Posen; d. 20 December 1937 in Tutzing, Bavaria, Germany) was a German officer of the Prussian Army, General-Quartermaster of the Imperial German Army during World War I, victor of Liege, and, with Paul von Hindenburg, one of the victors of the battle of the Battle of Tannenberg (1914).

After the war, he supported Adolf Hitler and the NSDAP and took part in the Munich Putsch, for which he was acquitted of criminal charges. He had a brief political career in the Weimar Republic being elected as a Deputy to the Reichstag in a coalition group associated with the NSDAP. He later retired from politics and began promoting Odinism and other forms of esoteric religion. 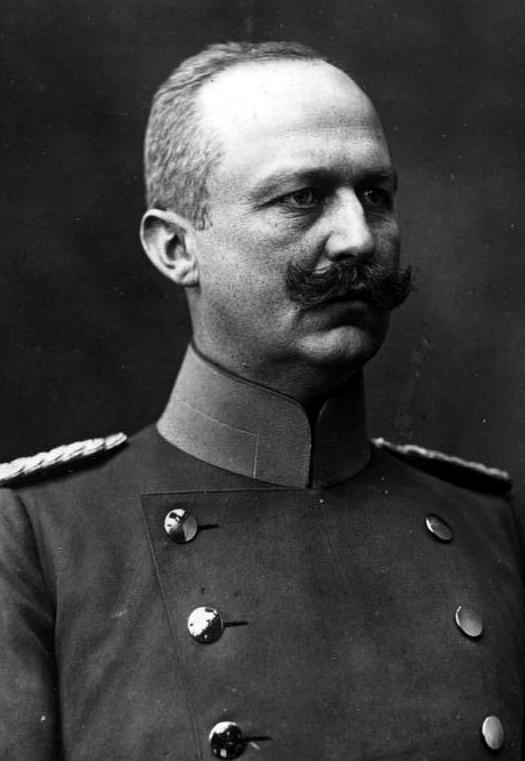 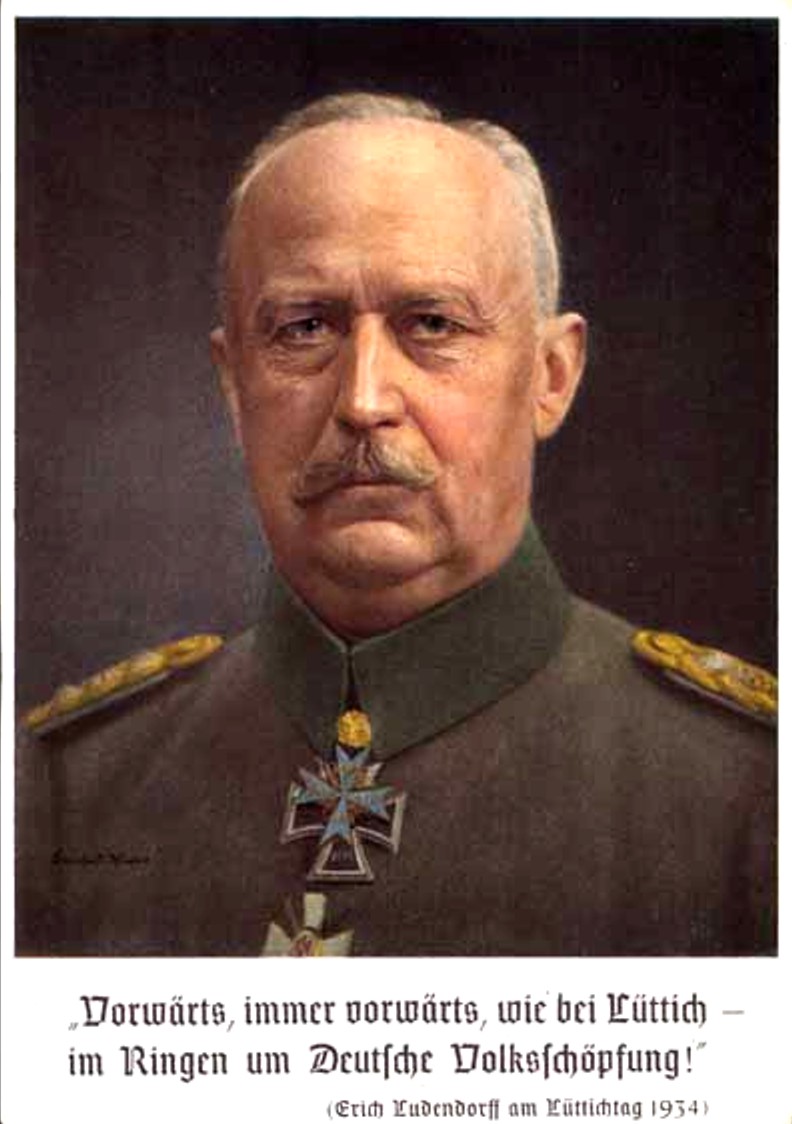 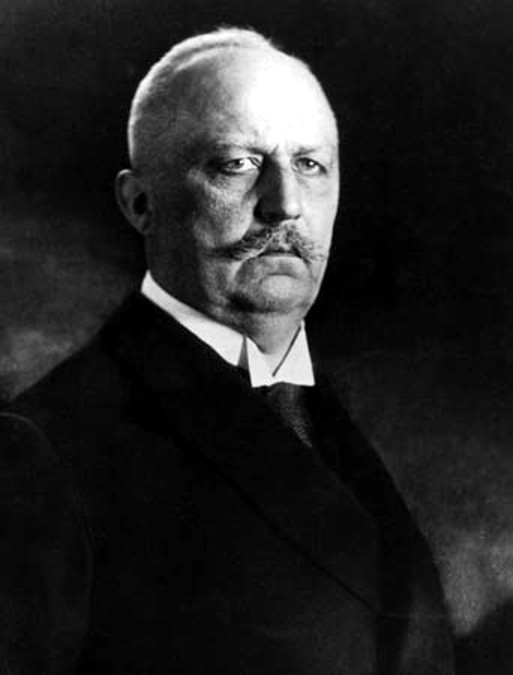 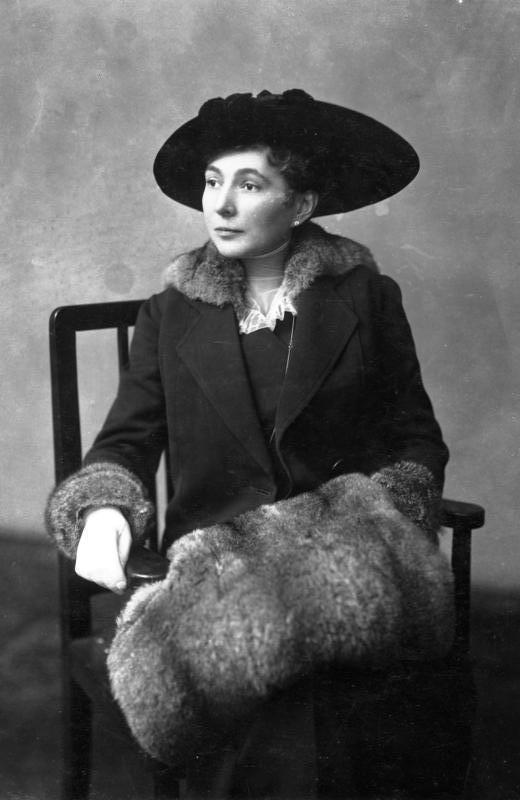 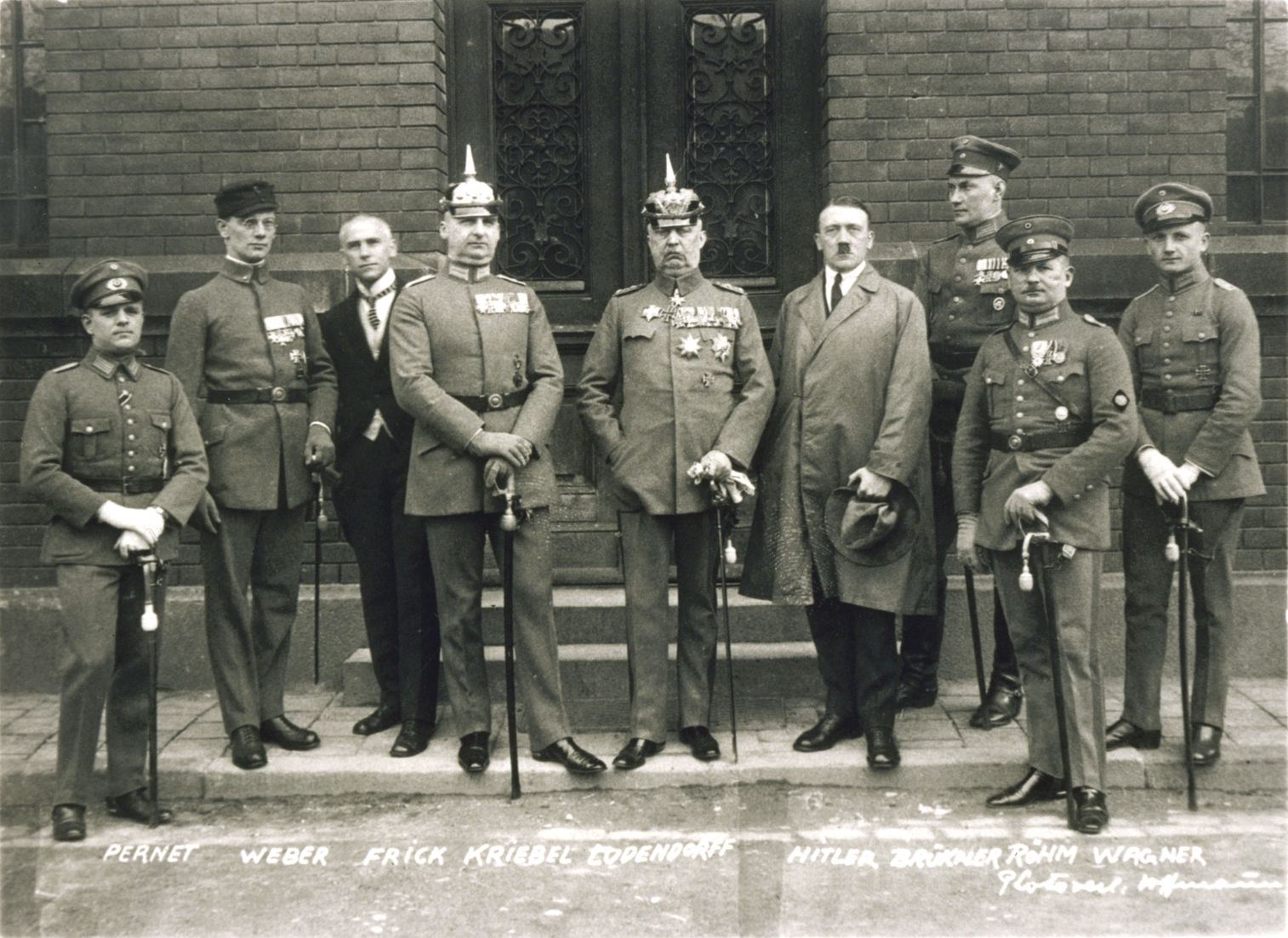 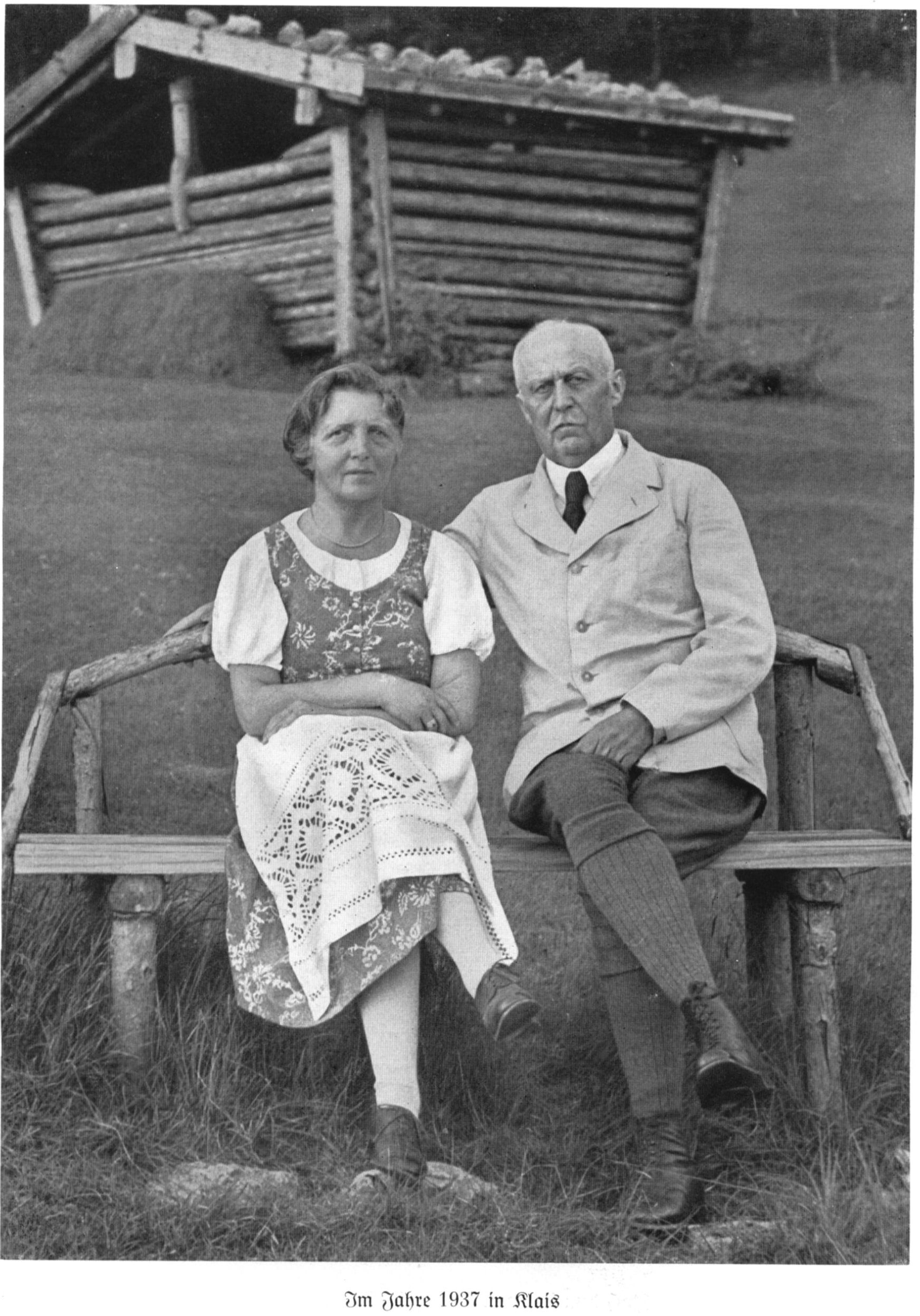 Ludendorff was born in Kruszewnia near Posen, Province of Posen, the third of six children of August Wilhelm Ludendorff, descended from Pomeranian merchants, who had become a landowner in a modest sort of way, and who held a commission in the reserve cavalry. Erich's mother, Klara Jeanette Henriette von Tempelhoff, was the daughter of the noble but impoverished Friedrich August Napoleon von Tempelhoff, and his wife Jeannette Wilhelmine von Dziembowska, through whom Erich was a remote descendant of the Dukes of Silesia and the Prince-elector|Marquesses and Electors of Brandenburg.

He is said to have had a stable and comfortable childhood, growing up on a small family farm. He received his early schooling from his maternal aunt and had a flair for mathematics.

His acceptance into the Cadet School at Plön was largely due to his excellence in mathematics and extraordinary work ethic that he would carry with him throughout his life. Passing his Entrance Exam with Distinction, he was placed in a class two years ahead of his actual age group. Thereafter he was consistently first in his class. Heinz Guderian attended the same Cadet School, which produced many well-trained German officers.

Despite Ludendorff's maternal noble origins, however, he married outside them, to Margarete née Schmidt (1875–1936).

Rise in the military

In 1885 he was commissioned as a second lieutenant in the 57th Infantry Regiment, at Wesel. Over the next eight years he saw further service as a lieutenant with the 2nd Marine Battalion at Kiel and Wilhelmshaven, and the 8th Grenadier Guards at Frankfurt-on-Oder. His service reports were of the highest order, with frequent commendations. In 1893 he was selected for the War Academy where the commandant, General Meckel, recommended him for appointment to the General Staff.

He was appointed to the German General Staff (Generalstab) in 1894, rising rapidly through the ranks to become a senior staff officer with V Corps HQ in 1902–04. In 1905, under von Schlieffen, he joined the Second Section of the Great General Staff (Großer Generalstab) in Berlin, responsible for the Mobilization Section from 1904–13. By 1911 he was a full colonel.

Ludendorff was involved in testing the minute details regarding the Schlieffen Plan, assessing the fortifications around the Belgian fortress city of Liege. Most importantly, he attempted to prepare the German army for the war he saw coming. The Marxist Social Democrats, who by the 1913 elections had become the largest party in the Reichstag seldom gave priority to army expenditures, building up its reserves, or funding advanced weaponry such as Krupp's siege cannons. Considerable funding went instead to the Kaiserliche Marine. He then tried to influence the Reichstag via the retired General Keim.

Finally the War Ministry caved in to political pressures about Ludendorff's agitations and in January 1913 he was dismissed from the General Staff and returned to regimental duties, commanding the 39th Lower Rhine Fusiliers at Dusseldorf. Ludendorff was convinced that his prospects in the military were nil but took up his mildly important position.

In April 1914 Ludendorff was promoted to Major-General and given the command of the 85th Infantry Brigade, stationed at Strassburg.

With the outbreak of World War I, Ludendorff was first appointed Deputy Chief of Staff to the German Second Army under General Karl von Bülow. His assignment was largely due to his knowledge and previous work investigating the dozen forts surrounding Liege, Belgium. The German assault in early August 1914, according to the Schlieffen Plan for invading France, gained him national recognition.

The Germans experienced their first major setback at Liege. Belgian artillery and machine guns killed thousands of German troops attempting frontal assaults. On August 5, Ludendorff took command of the 14th Brigade, whose general had been killed. He cut off Liege and called for siege guns. By August 16, all forts around Liege had fallen, allowing the German First Army to advance. As hero of Liege, Ludendorff was awarded Germany's highest military decoration for gallantry, the Pour le Mérite, presented by the Kaiser himself on August 22.

Russia had been secretly mobilising since July 20th and a more formal general mobilisation was announced on July 30th. On August 15th two huge Russian armies invaded Germany. Those insufficient German forces stationed in East Prussia were being pushed back as the Russians advanced towards Königsberg and further. Only a week after Liege's fall, Ludendorff, then storming Belgium's second great fortress at Namur, was urgently requested by the Kaiser to serve as Chief of Staff of the Eighth Army on the Eastern Front.

Ludendorff went quickly with Paul von Hindenburg, who was recalled from retirement, to replace Commander Maximilian von Prittwitz, who, it was said, had proposed abandoning East Prussia altogether. Hindenburg relied heavily upon Ludendorff and General Max Hoffmann in crafting the victory in the battles of Battle of Tannenberg and the Battle of Masurian Lakes where the Russian armies were decisively beaten and routed out of German territory.

In August 1916, Erich von Falkenhayn resigned as Chief of the General Staff. Paul von Hindenburg took his place, with Ludendorff as his First Generalquartiermeister (Deputy Chief of Staff), forming the so-called Third Supreme Command. The "Third OHL", (Oberste Heeresleitung or "Supreme Army Command"), was effectively a military-industrial dictatorship, which largely relegated Kaiser Wilhelm II to the periphery. They meddled with domestic politics and forced government ministers to resign, including three chancellors. Afterward, they held an effective veto over appointments in the state hierarchy.

Ludendorff advocated unrestricted submarine warfare to break the British blockade, which became a factor in bringing the United States into the war in April 1917, although they were quasi-belligerents already supporting Britain and France with continuous shiploads of materials.

Russia declared a ceasefire on 15 December 1917 and withdrew from the war, and Ludendorff participated in the meetings held between German and the new Bolshevik leadership. After much deliberation, the Treaty of Brest-Litovsk was signed in March 1918. That same year, as commander-in-chief on the Western Front, Ludendorff planned and organized Germany's final offensive, known as Operation Michael. This final push to win the war fell short and as the German war effort collapsed, Ludendorff's tenure of war-time leadership ended. On September 29, the Kingdom of Prussia assumed its pre-war authority, which lasted until Kaiser Wilhelm II's abdication. Ludendorff fled Germany for Sweden.

Reflections on the war, a look to the future

In exile, he wrote numerous books and articles about the German military's conduct of the war while forming the foundation for the Dolchstoßlegende, the Stab-in-the-back theory, for which he is considered largely responsible. Ludendorff was convinced that Germany had fought a defensive war and in his opinion, Kaiser Wilhelm II had failed to organize a proper counter-propaganda campaign or provide efficient leadership, notwithstanding that such matters were in the hands of the Government.

Ludendorff was also extremely suspicious of the Social Democrats and leftists, whom he blamed for the humiliation of Germany through the Versailles Treaty. Ludendorff also claimed that he paid close attention to the business element (especially the Jews), and saw them turn their backs on the war effort by letting profit dictate production and financing rather than patriotism.

Again focusing on the left, Ludendorff was appalled by the strikes that took place towards the end of the war and saw the homefront collapse before the front, with the former poisoning the morale of soldiers on temporary leave. Most importantly, Ludendorff felt that the German people as a whole had underestimated what was at stake in the war: he was convinced the Entente had started the war and was determined to dismantle Germany completely.

Ludendorff eventually returned to Germany in 1920. The Weimar Republic planned to send him and several other noted German generals (von Mackensen, et al.) to reform the National Revolutionary Army of China, but this was cancelled due to the limitations of the Treaty of Versailles and the image problems with selling such a noted general out as a mercenary. Throughout his life, Ludendorff maintained a strong distaste for politicians and found most of them to be lacking an energetic national spirit. However, Ludendorff's political philosophy and outlook on the war brought him into right-wing politics as a German nationalist and won his support that helped to pioneer the NSDAP. Early on, Ludendorff also held Adolf Hitler in the highest regard.

At Hitler's urging, Ludendorff took part in the Munich Putsch in 1923. The plot failed but Ludendorff was acquitted in the trial that followed. In 1924, he was elected to the Reichstag as a representative of the NSFB (a coalition of the German Völkisch Freedom Party and members of the NSDAP), serving until 1928. He ran in the 1925 presidential election against former commander Paul von Hindenburg and received just 285,793 votes. Ludendorff's reputation may have been damaged by the Putsch, but he conducted very little campaigning of his own and remained aloof, relying almost entirely on his lasting image as a war hero, an attribute which Hindenburg also possessed.

After 1928, Ludendorff went into retirement, having fallen out with the National Socialists. In his later years, Ludendorff went into a relative seclusion with his second wife, Mathilde von Kemnitz (1874–1966), authoring several books. He concluded that the world's problems were the result of Christians, Jews, and Freemasons. Together with Mathilde, he founded Tannenbergbund to promote Odinism and later the Bund für Gotteserkenntnis (Society for the Knowledge of God).

When Ludendorff died on 20 December 1937, he was given a state funeral attended by Hitler on 22 December 1937. The memorial took place at the Feldherrnhalle in Munich, the burial was in Tutzing, Bavaria on his estate.