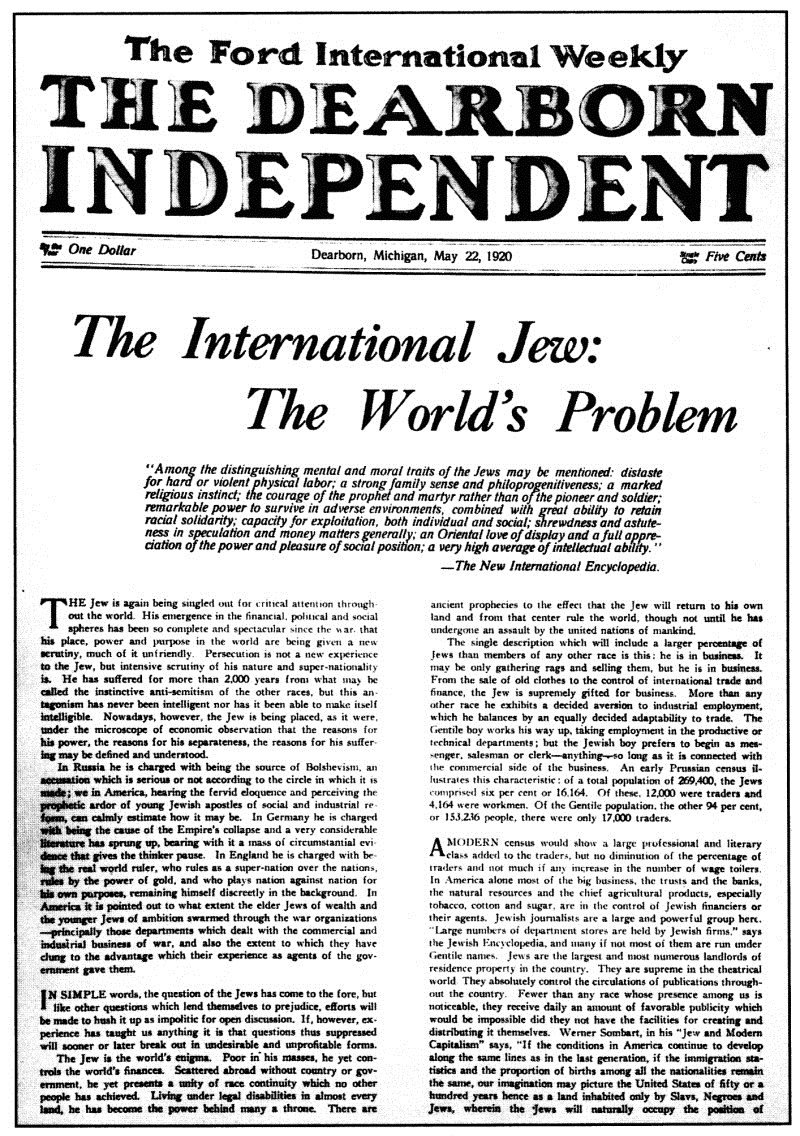 The Dearborn Independent, also know as The Ford International Weekly, was a weekly newspaper established in 1901, but published by Henry Ford from 1919 through 1927. The first issue under Ford’s direction appeared on January 11, 1919. The subtitle of the publication was Chronicler of the Neglected Truth. It created a sensation when it published the Protocols of the Elders of Zion and later ran the headline, “The International Jew: The World’s Problem” on May 22, 1920.

In 1918, Ford negotiated to buy the Independent from Marcus Woodruff, who had been running it at a loss. The initial staff of the newspaper included E. G. Pipp, previously managing editor of the Detroit News, writers William J. Cameron (also formerly of the News) and Marcus Woodruff, and Fred Black as business manager.

The paper was printed on a used press purchased by Ford and installed in Ford's tractor plant in The Rouge. Publication under Mr. Ford was inaugurated in January 1919. The paper initially attracted notoriety in June 1919 with coverage of the libel lawsuit between Henry Ford and the Chicago Tribune, as the stories written by Pipp and Cameron were picked up nationally.

Ford did not write, but rather expressed his opinions verbally to his executive secretary, Ernest Liebold, and to the paper's editor William J. Cameron. Cameron replaced Pipp as editor in April 1920 when Pipp disagreed with the plan to publish anti-jewish articles beginning in May. Cameron had the responsibility for writing the articles and expanding Ford's views within them. Liebold--with the assistance of detectives and investigators--was responsible for collecting the material to support the articles.

The paper reached a national circulation of 900,000 by 1925 (only the New York Daily News was larger in this respect), thanks to the paper's promotion by Ford dealerships. Lawsuits regarding the anti-Jewish material caused Ford to close the paper, the last issue being published in December 1927.

The paper published a total of ninety-two anti-Jewish articles (almost weekly) starting in May 22, 1920 until January 14, 1922.[1] [2] These articles would later be compiled as a book, The International Jew.