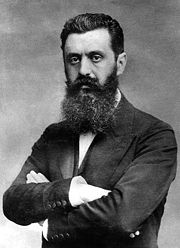 Theodor Herzl (2 May 1860 – 3 July 1904) was an Austro-Hungarian Jew who is considered the father of modern political Zionism. His book Der Judenstaat (The Jewish State or The State of the Jews) was published in 1896.

There are various less politically correct views on Herzl and his life. See the "External links" section.

"The Jewish question exists. It would be foolish to deny it... The Jewish problem exists wherever Jews live in noticeable numbers. Where it does not exist, it is introduced by Jews who move in... I believe I can understand anti-semitism, which is in many ways a complicated movement. I look on this movement from the standpoint of a Jew – but without hatred or fear. I believe I recognize in anti-semitism what is crude humor, ordinary economic envy, inherited prejudice, religious intolerance – but also what is deemed to be self defense."

"Anti-semitism grows daily, hourly, among the peoples, and must continue to grow since its causes continue to exist, and cannot be alienated."

"The causa remota is the loss, in the Middle Ages, of the ability to assimilate; the cause proxima is our overproduction of middling intelligences, that can neither be drained off, nor rise higher-hence, no healthy draining off, and no healthy rising to a higher level. Downward, we are being proletarianized into revolutionaries; we are the subalterns of every revolutionary party, while at the same time our terrible financial might grows upward."

—From Der Judenstaat (The Jewish State).[1]

In his diary Herzl describes submitting his draft proposals to the Rothschild Family Council, noting: "I bring to the Rothschilds and the big Jews their historical mission. I shall welcome all men of goodwill – we must be united – and crush all those of bad."

He read his manuscript "Addressed to the Rothschilds" to a friend, Meyer-Cohn, who said, "Up till now I have believed that we are not a nation – but more than a nation. I believed that we have the historic mission of being the exponents of universalism among the nations and therefore were more than a people identified with a specific land."

Herzl replied: "Nothing prevents us from being and remaining the exponents of a united humanity, when we have a country of our own. To fulfill this mission we do not have to remain literally planted among the nations who hate and despite us. If, in our present circumstances, we wanted to bring about the unity of mankind independent of national boundaries, we would have to combat the ideal of patriotism. The latter, however, will prove stronger than we for innumerable years to come."[3]

It may be that Turkey will refuse or be unable to understand us. This will not discourage us. We will seek other means to accomplish our end. The Orient question is now the question of the day. Sooner or later it will bring about a conflict among the nations. A European war is imminent. . The great European War must come. With my watch in hand do I await this terrible moment. After the great European war is ended the Peace Conference will assemble. We must be ready for that time. We will assuredly be called to this great conference of the nations and we must prove to them the urgent importance of a Zionist solution to the Jewish Question. We must prove to them that the problem of the Orient and Palestine is one with the problem of the Jews – both must be solved together. We must prove to them that the Jewish problem is a world problem and that a world problem must be solved by the world. And the solution must be the return of Palestine to the Jewish people.
—Stated in conversation with a delegate at the First Congress, Litman Rosenthal. American Jewish News, 7 March 1919[3]

Part of this article consists of modified text from Wikipedia, and the article is therefore licensed under GFDL.
Retrieved from "http://en.metapedia.org/m/index.php?title=Theodor_Herzl&oldid=449089"
Categories: