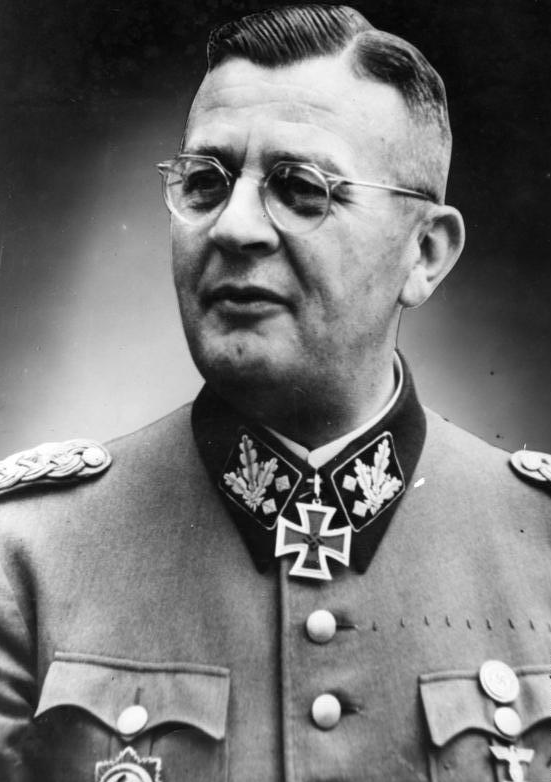 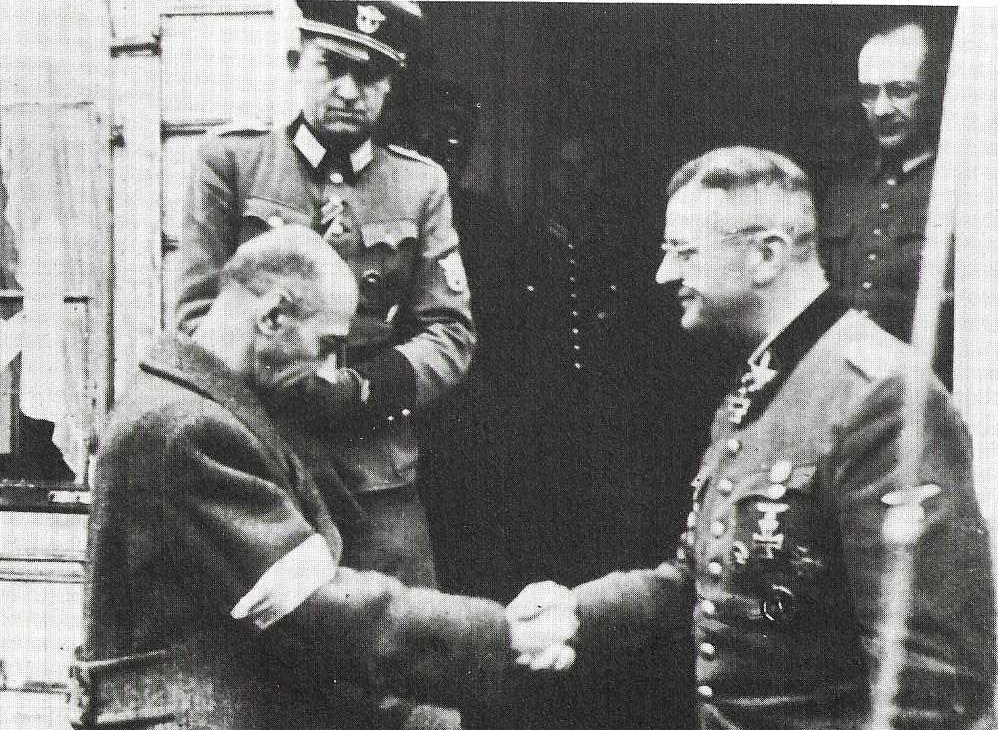 SS-Obergruppenfuhrer von dem Bach-Zelewski receives the surrender of the Polish Bor-Komorowski, who led the failed Warsaw Uprising, at Ozarow, 2 Oct 1944.

In November 1914, he volunteered for the Prussian army — one of its youngest recruits — and served throughout World War I. He was wounded twice, then gassed in 1918, to the long-term detriment of his health, and was awarded the Iron Cross.[2] After the war he remained in the Reichswehr, and fought in the Freikorps against the Polish terrorist insurgency in Upper Silesia, where, with a grasp of the Polish language, his services were valued. In 1924 he resigned his army commission and returned to his farm in Düringshof, Pomerania. He enrolled with the border guards (Grenzschutz) the same year. On 23 October 1925 he legally changed his surname to von dem Bach-Zelewski. In 1930 he left the border guards and joined the NSDAP and the following year joined the SS. By the end of 1933, Erich had been promoted to SS-Brigadeführer, and was said to have been involved with the Night of the Long Knives in 1934. He was present at the 1938 Party Congress at Nuremberg.[3]

Throughout the war he was stationed in Silesia, White Russia and Poland with tasks such as anti-terrorist warfare. After the assassination of Reinhard Heydrich, he was considered for his replacement, but the position went to Kurt Daluege. During the 1944 Warsaw Uprising he was placed in control of all the troops engaged in its suppression[4], and after two months of fighting defeated the Polish insurgents. He formally accepted the surrender of Polish Major-General Bor-Komorowski, Commander of the insurgents, at Ozarow on 2 October 1944. Von dem Bach-Zelewski gave a personal guarantee that they would be treated as prisoners of war, which they were.[5][6]

When the war ended, von dem Bach-Zelewski was arrested by American troops in early August 1945. In exchange for not being charged with war crimes and not being extradited to the Soviet Union or Poland, he gave some testimonies against others at the Nuremberg Trials on topics such as the Einsatzgruppen, Lebensraum, and the October 4 Posen speech.

He subsequently changed his surname to just Żelewski. In 1951 he was again arrested, this time by the West German police, and charged with murdering a SA officer during the 1934 Night of the Long Knives; furthermore, in 1961 he was once again charged with murder, this time involving the deaths of 10 communists and received an additional 10 years in a labour camp.

Bach died in a Munich prison on 8 March, 1972, aged 73, a demonstration of the hatred and evil persecution activities of The Left.