Gottlob Christian Berger (16 July 1896 – 5 January 1975) was a German teacher and officer of the Imperial German Army, Freikorps, SA, SS and Wehrmacht (reserves), finally Major der Reserve, SS-Obergruppenführer and General of the Waffen-SS and recipient of the Knight's Cross of the War Merit Cross during World War II as well as politician and member of the Reichstag from 1943 until 1945. 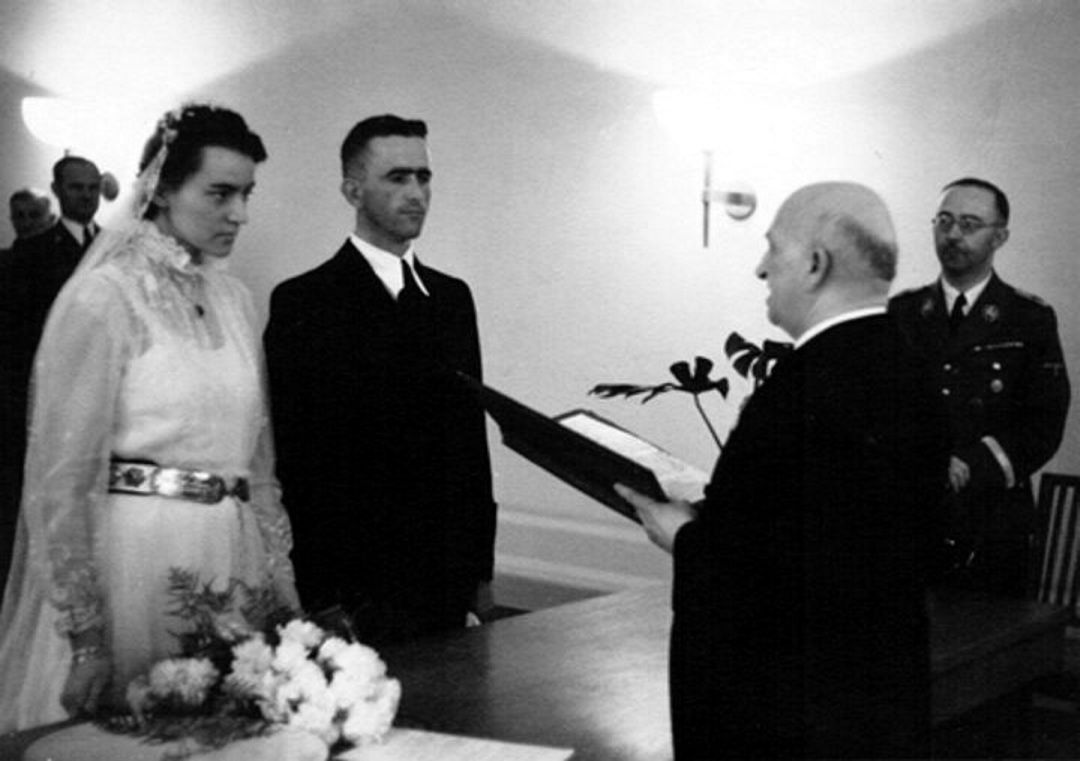 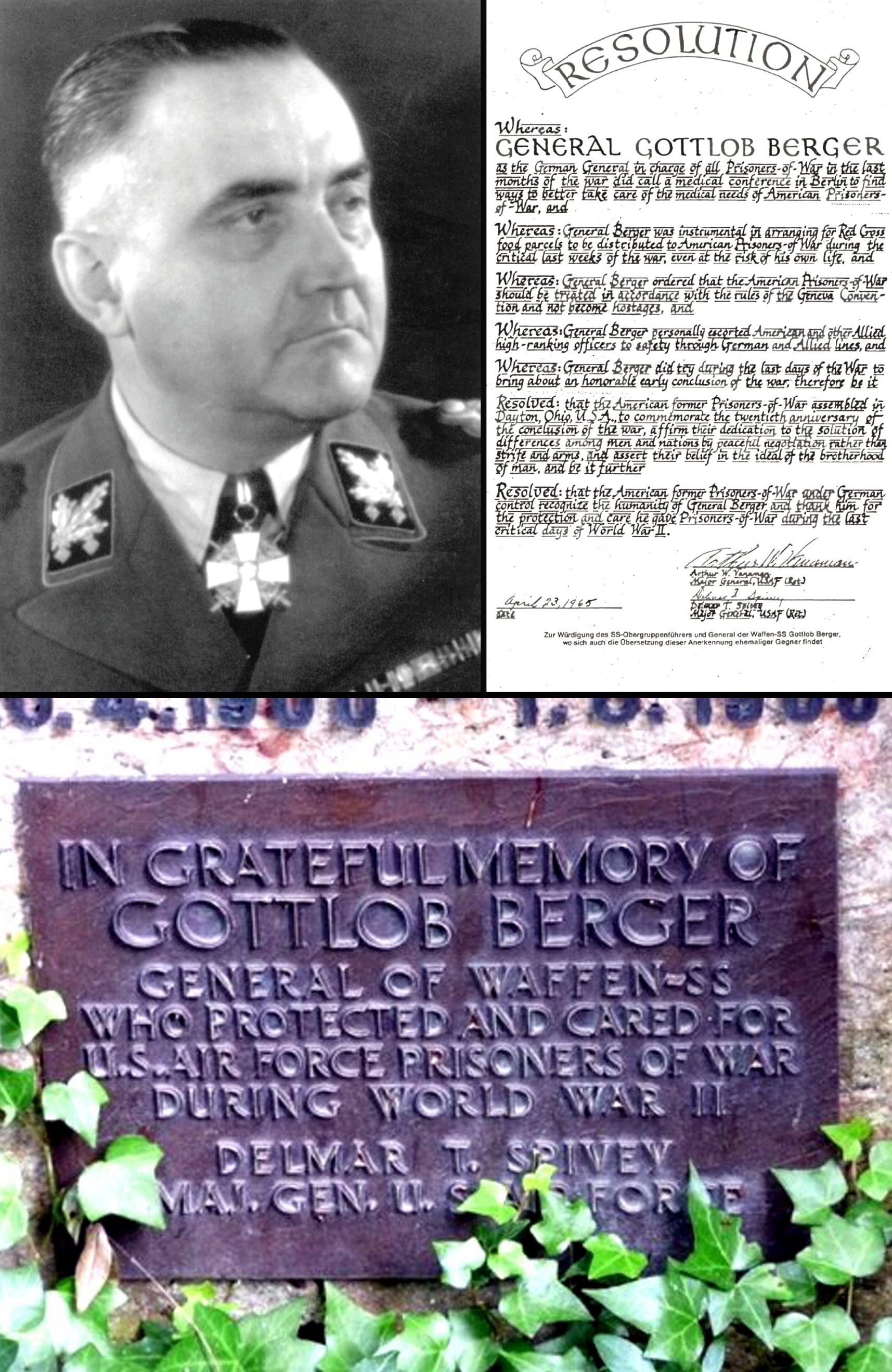 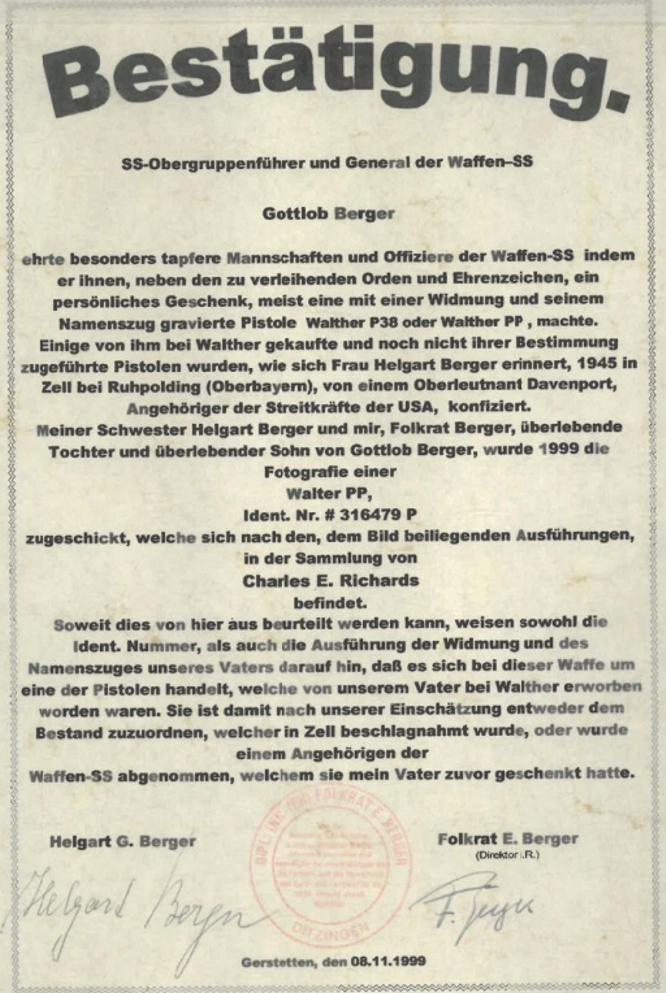 Berger was born in the year 1896 in Gerstetten (Kreis Heidenheim) near Ulm.[1] While serving in the German Army as a war volunteer, NCO and since 1916 officer during World War I, he was wounded four times and awarded the Iron Cross First Class. Immediately after the war, he was a leader of the Einwohnerwehr militia in his native North Württemberg. In April 1921, he switched to the “Grenzschutz West”, a paramilitary organization that belonged to the Black Reichswehr. The “Organization F”, to which Berger belonged from April 1924 to April 1929, can also be attributed to these formations, which the Reichswehr supported in contravention of the provisions of the Versailles Treaty. Until November 1928, he led the Freischar "Alb-Ost" of the "Organization F"; he then commanded the troop command Württemberg-Mitte of the same organization.

He joined the NSDAP in 1922. In September 1923, he attended a meeting of military associations in Nuremberg. In October and November 1923, Berger led the "National Socialist Battalion Ulm/Land". He was temporarily arrested in Gerstetten in October 1923 for possession of weapons, the formation of armed groups and for presuming office. After Adolf Hitler's Munich Beer Hall Putsch in November 1923, the party was outlawed. Berger studied and worked as a teacher. He joined the paramilitary Sturmabteilung (SA) on 15 November 1930 and rejoined the NSDAP on 1 January 1931 (No. 426,875). In March and April 1933, he was honorary special commissioner of the supreme SA leadership. Berger temporarily sat in the Württemberg state parliament before it was dissolved in October 1933. Based on his experiences in paramilitary organizations and his training as a physical education teacher, he also gave numerous lectures on pre-military youth education.

Between September 1934 and January 1936, Berger also held regional positions in the organization "Chief of Education", an organization headed by Friedrich-Wilhelm Krüger that was supposed to improve paramilitary training in the NSDAP. On 30 January 1936, Berger joined the SS with the rank of SS-Oberführer (SS No. 275,991). Berger was initially assigned to the SS Upper Section "Southwest" as a sports officer. At the same time, between April 1936 and June 1938, he was head of the Württemberg State Gymnastics Institute in Stuttgart with the official title of Director of Studies and a consultant for physical education in the Reich Ministry of Education in Berlin. On 1 October 1937, Berger became a leader on the staff of the Reichsführer SS, Heinrich Himmler. In his positions in the civil service, he was mostly on leave for service in the SS, and in the spring of 1939, he finally left the Württemberg Ministry of Education and Cultural Affairs. Berger's center of life shifted to Berlin without breaking off his contacts with Württemberg.

On 1 July 1938, Himmler appointed Berger head of the newly created supplementary office (Amt VIII) in the SS main office, one month later Berger also took over the management of the registration office (Amt VI) and the office for physical education (Amt X). As head of the supplementary office, Berger was responsible for recruiting for the armed SS units, the SS disposal troops and the SS Totenkopf units, the latter responsible for guarding the concentration camps. In 1938, Hitler had strengthened the position of the armed SS units against the Wehrmacht. With Berger's participation, Himmler had concluded two agreements with the Reich Youth Leadership, as a result of which 32,000 recruits - mainly from the Hitler Youth - came to the armed SS units.

After the Poland Campaign, Himmler commissioned Berger on 26 September 1939 to set up the Volksdeutsche Selbstschutz. Formed from members of the German minority in Poland and led by the SS, these units were involved in the protection of German citizens against Polish attacks and terror. Promoted to SS-Brigadeführer on 20 April 1939, Berger replaced August Heissmeyer as head of the SS Main Office on 1 April 1, 1940. Berger reorganized the main office and replaced Heissmeyer's employees. Berger's central field of activity was the recruitment of volunteers for the Waffen-SS that had been formed in the meantime from the SS-Verfügungstruppe. For this he resorted to ethnic Germans, for example from Romania, who were recruited in transit camps run by the Volksdeutsche Mittelstelle. Foreign volunteers were also recruited via the "Germanic Control Center" (Germanische Leitstelle) under Berger, headed by SS-Obersturmbannführer Dr. Franz Riedweg.

From 1940, he was Chief of Staff for the military SS and head of the SS main leadership office. The idea of an army of foreign volunteers of the Waffen SS was designed and executed by Berger.[1] He also promoted the pamphlet Mit Schwert und Wiege (With Sword and Cradle) for the recruitment of non-Germans. From 1 April 1943, Berger worked as Himmler's liaison in the Reich Ministry for the Occupied Eastern Territories under Alfred Rosenberg. Erich von dem Bach-Zelewski, Higher SS and Police Leader (HSSPF) in central Russia and responsible there for "Bandenbekämpfung", hoped in April 1943 that Berger's position in the East Ministry would improve the armament of his units and hoped that Berger would "expand his influence in the direction of a more pliable Ostpolitik.” Berger headed the SS Mail Protection (SS-Postschutz) as early as March 1942. Among other things, he was responsible for the return transport of wounded and sick people from the combat zones. On his initiative, some Russian prisoners of war received civilian worker status, as Berger generally supported the care of prisoners of war.

Shortly after D-Day, he proposed to recruit 35,000 North-african soldiers for the Waffen-SS[1]. According to a source[1], these were prisoners of war, captured soldiers who formerly were part of the French army. He spoke up for Hans Speidel (as did Sepp Dietrich and Albert Speer), who was arrested after July 20 plot. On 31 August 1944, two days after the outbreak of the Slovak putsch, Berger was sent as HSSPF "Slovakia" to suppress the communist terror in Slovakia. Berger pulled together German formations such as the Tatra Division, units of the SS Mail Protection Service and the Dirlewanger Special Command; in addition, collaborating Slovak groups such as the Hlinka Guard were used. At the end of September 1944, Himmler appointed Berger to be the staff leader of the newly formed German Volkssturm; On 1 October 1944, Hitler also gave him responsibility for prisoners of war and internees as "General Inspector for Prisoners of War". On 20 February 1945, he reported to Himmler about the formation of voluntary work details from US-American prisoners of war.

At the end of the war, on 17 April 1945, Berger was part of a military tribunal that sentenced Karl Brandt to death in Goebbels' private apartment. Brandt, Hitler's former companion doctor and most recently Reich Commissioner for Sanitation and Health Services, had been accused of defeatism. The death sentence against Brandt was not carried out by the end of the war (Himmler delayed his execution). He was released from arrest by order of Reichspräsident Karl Dönitz on 2 May 1945.

Berger last met Hitler on 22 April 1945 in the Führerbunker. Berger had previously been appointed "the Führer's military plenipotentiary" for Bavaria. On the night of 23 April 1945, Berger flew from Berlin to southern Germany to the "Alpine Fortress" (Alpenfestung). In Bavaria he was responsible for 135 or 137 prominent prisoners (Sonder- und Sippenhäftlinge) from 16 nations who had been taken there as hostages (among them Dr. Kurt von Schuschnigg with family, Philipp Prinz von Hessen, Sigismund Payne Best, Bogislaw von Bonin, Hjalmar Schacht, Oberst z. V. Horst von Petersdorff and Martin Niemöller as well as the generals Georg Thomas, Alexander von Falkenhausen and Fritz Lindemann). He was also responsible for 21 prominente POWs, who had been held at Colditz Castle until 13 April 1945, including Viscount Lascelles and the Master of Elphinstone, both nephews of King George VI, and Giles Romilly, a nephew of the British Prime Minister Winston Churchill. Berger arranged for them to be evacuated from Colditz and transported south and handed over to advancing U.S. Army troops. In doing so, Berger disobeyed a direct order from Hitler for them to be executed. This action later contributed to the shortening of his prison sentence for alleged war crimes.

On 5 May 1945, Berger still commanded a Kampfgruppe of remnants of the XIII SS Army Corps, including fragments of the 17th SS Panzergrenadier Division Götz von Berlichingen, 35th SS and Police Grenadier Division, and the 2nd Mountain Division. Berger intended to surrender separately to American forces, and after two days delay, managed to locate a regimental commander of the 101st Airborne Division near Berchtesgaden south of Salzburg. On the following day, on 8 May 1945, Berger became a POW in or near Zell (Ruhpolding).

After the war, he was put on trial in the Nuremberg show trials in 1947. His trial involved the use of the recently "discovered" first Posen speech as evidence against Berger. He was convicted in 1949 and sentenced to 25 years in prison. Two years later the sentence was reduced to ten years and, after serving six and a half years, he was released from Landsberg prison in December 1951. Berger worked in Stuttgart and Böblingen in his native Baden-Württemberg, and managed a curtain rail factory. He also contributed articles to the monthly patriotic journal "Nation Europa", published in Coburg, and occasionally wrote articles encouraging the North Atlantic Treaty Organisation to give greater consideration to former members of the Waffen-SS.

In September 1964, Berger testified as a witness in the criminal trial against Karl Wolff. Around the same time, Robert Bosch GmbH commissioned him to write down his memoirs for a fee. This resulted in tape recordings. The Stuttgart company granted Berger further financial help and also legal assistance, so that Berger was able to draw a pension for his time as a teacher before 1933. Berger spent the rest of his life after his retirement at the end of December 1964 in his hometown of Gerstetten.

General Berger died on 5 January 1975 in Stuttgart. Other sources state, he died in Gerstetten, where he was alo buried.[2]

"In grateful memory of Gottlob Berger, General of the Waffen SS, who protected and cared for USAAF prisoners of war"

Berger had three brothers, two of which died in the trenches of the First World War; while the third was executed in September 1918 in the United States of America because of espionage.[1] In 1921, he married his fiancée Maria Dambach (b. 20. April 1900). They would have foru children: