Gregor Straßer (often Strasser in English; 31 May 1892 – 30 June 1934) was a German officer of the Imperial German Army and politician of the National Socialist German Workers Party. An early member of NSDAP, he participated in the Munich Putsch and was later an important figure in the growth of the party, especially in northern Germany.

On 7 January 1931, Straßer suffered a skiing accident in Oberstaufen. His injuries were so severe - he fractured a vertebra - that his life, according to Peter Stachura,[1] was hanging by a thread (his life hanging precariously in the balance) at times. He was only able to leave the hospital after three months, but his health was still severely impaired: He was plagued by severe pain and had to carry a walking stick with him for the next months. This was the beginning of his political and personal decline.

In 1932, there was an attempt by the Reichskanzler (Dec 1932-Jan 1933) General der Infanterie Kurt von Schleicher to split the NSDAP, with Straßer's help. The project failed because Straßer could not bring himself to break with Hitler. Hitler had also learned early on about von Schleicher's negotiations with Straßer through the British journalist Sefton Delmer. At a leaders' conference (Führertagung) in early December 1932, he was permitted to address the leading figures of the party once again, but on 8 December, in recognition of his defeat, Gregor Straßer surprisingly resigned from all party offices, but remained a member of the party and the SA. In March 1933, Straßer officially exited politics by renouncing his Reichstag seat. The following year he was arrested and executed during the Night of the Long Knives. Straßer was neither a consumate poliician nor an outstanding statesman, but he was a man of considerable personal and political substance. 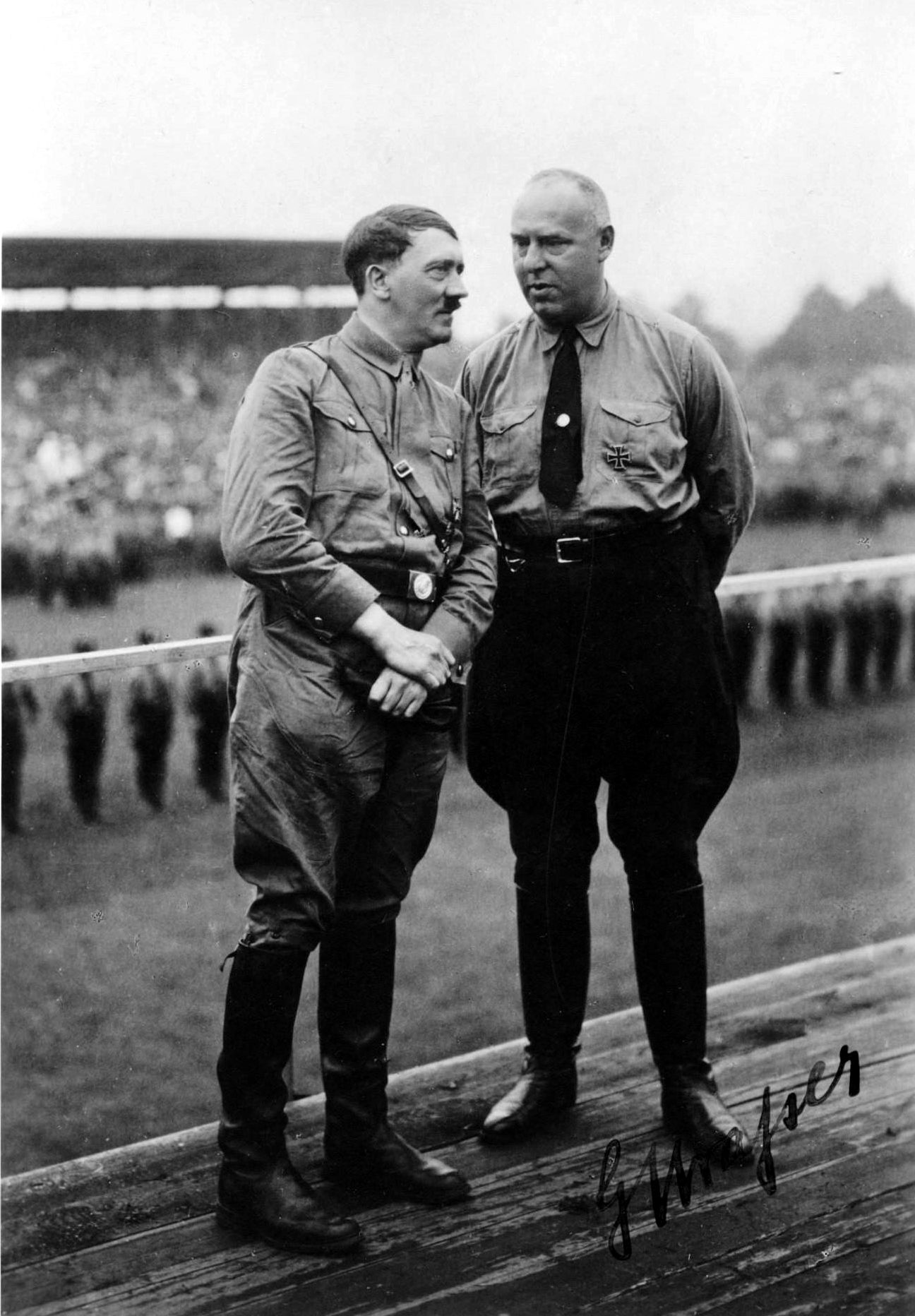 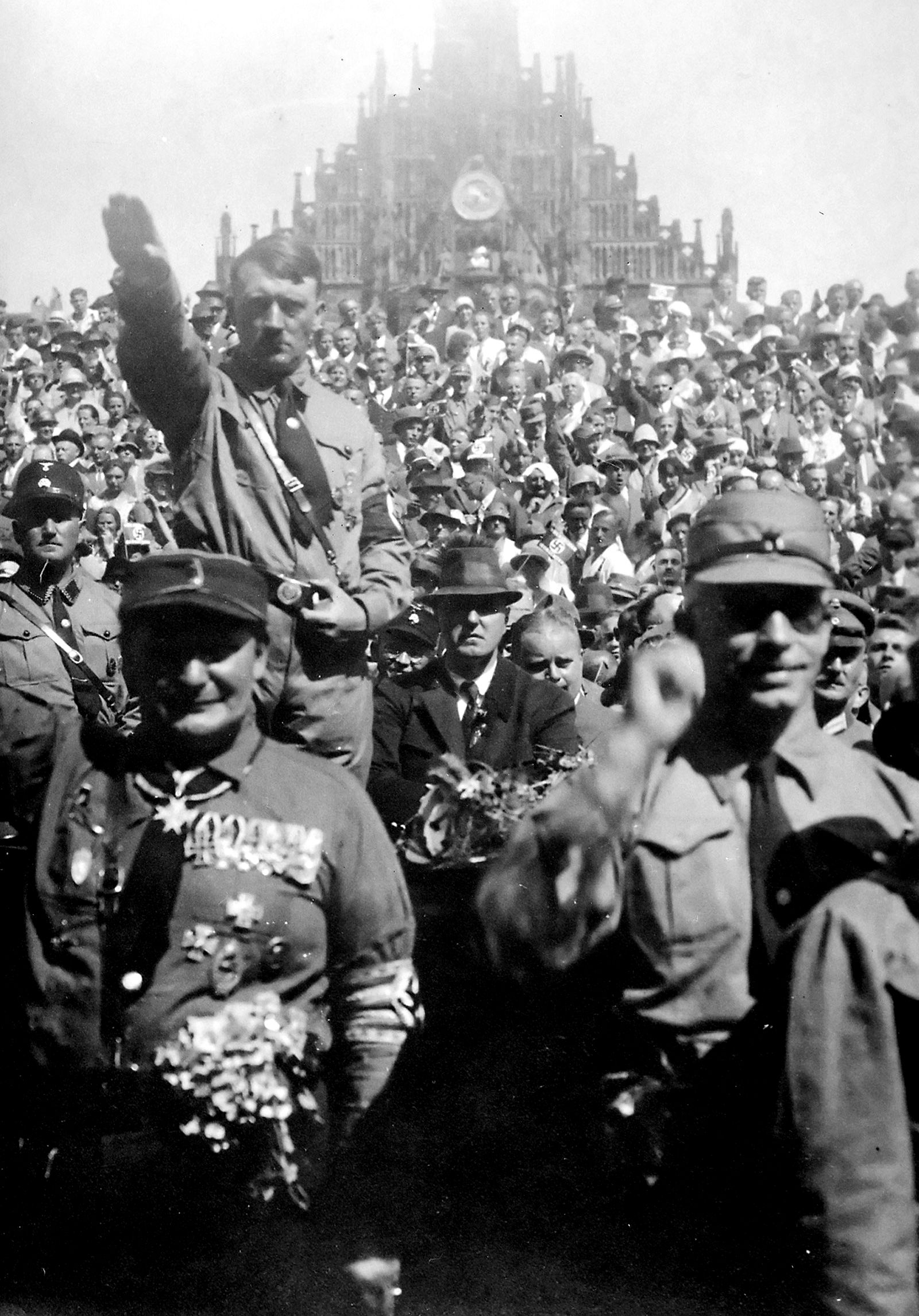 Hitler during the 4. Reichsparteitag der NSDAP in Nürnberg (1–4 August 1929); in front of the Führer Hermann Göring, behind him (in a dark civilian suit) Gauleiter Gregor Straßer 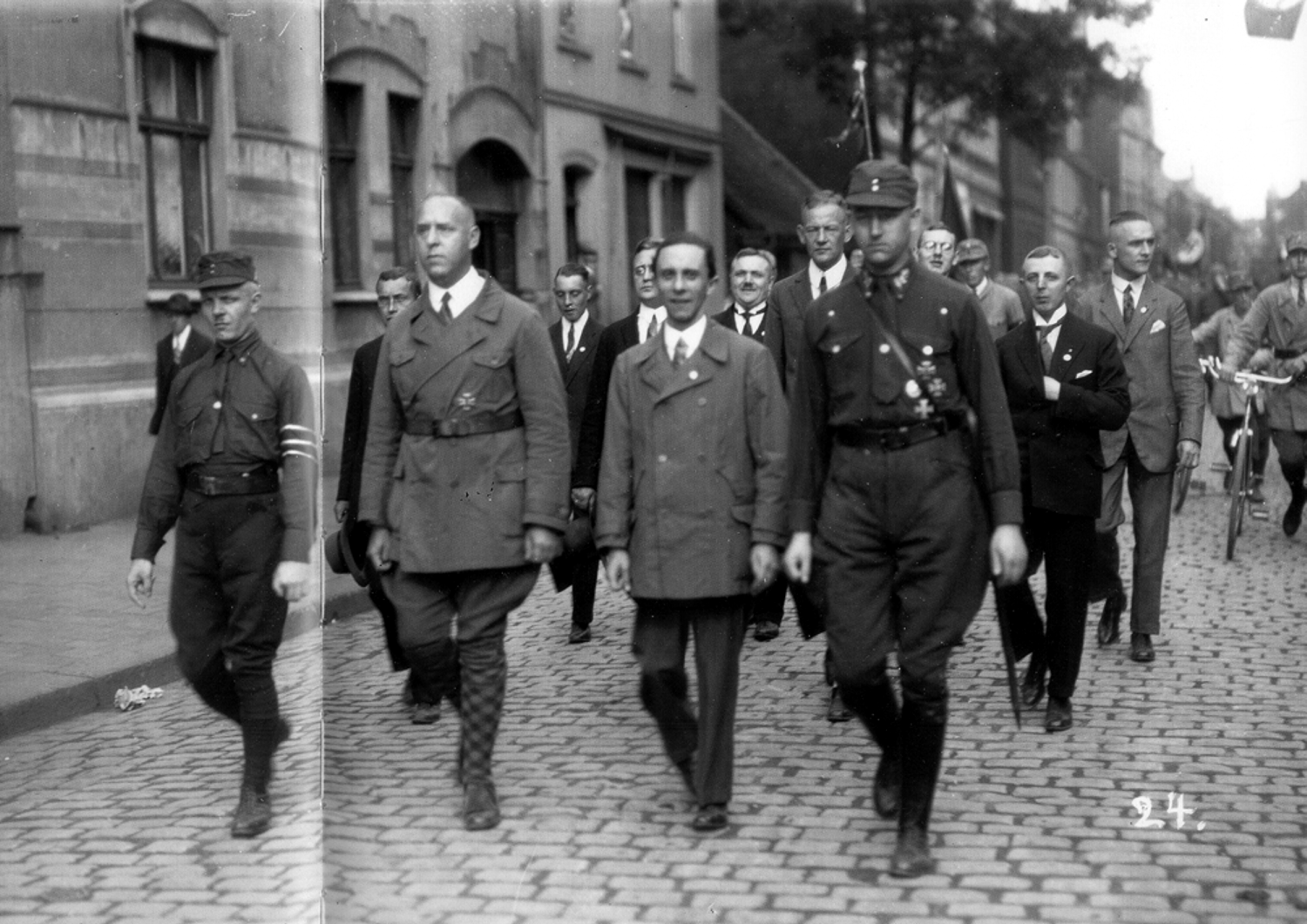 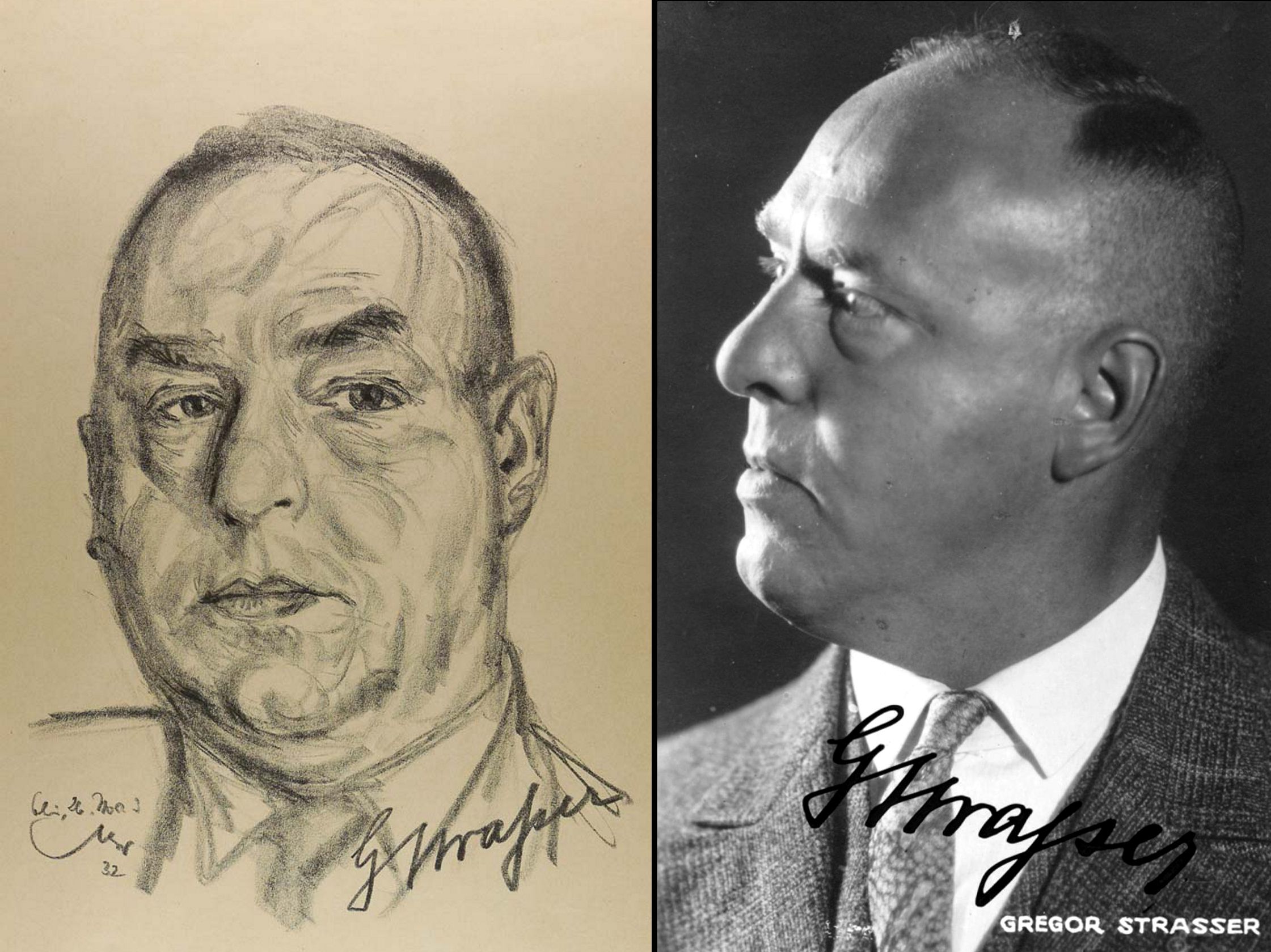 He attended the local Gymnasium (high school) and after his final examinations (Abitur in 1908), served an apprenticeship as a druggist in the Lower Bavarian village of Frontenhausen from 1910 until 1914. In 1914, he began to study pharmacy at the Ludwig Maximilian University of Munich, suspending his studies in the same year to enlist as a volunteer in the German Imperial Army. Straßer took part in World War I, rising to the rank of First Lieutenant of the reserves (Oberleutnant der Reserve), and being decorated with the Iron Cross, First and Second Class.

In 1918, he resumed his studies at Friedrich-Alexander-University, Erlangen-Nuremberg and in 1919 he joined the patriotic Freikorps (Freikorps „Epp“) led by Franz Ritter von Epp (de). He passed his state examination successfully in the same year, and in 1920 started work as a pharmacist in Landshut. Straßer established and commanded Sturmbataillon Niederbayern (English: Storm battalion Lower Bavaria), where young Heinrich Himmler served as his adjutant. By March 1920, Straßer's Freikorps was ready to participate in the failed Kapp Putsch. During that time, his brother Otto commanded a socialist Rote Hundertschaft (Red Group of a Hundred) to battle against this "reactionary" coup d'état. It is documented that Straßer, as a veteran, joined the Landshut local group of the German Officers' Association in January 1921 and soon afterwards took over the leadership of the paramilitary association of nationally-minded soldiers (VNS). From this association the "Lower Bavaria Assault Battalion" led by Straßer arose in Landshut. At times, the battalion consisted of up to 2,000 men, including the young Heinrich Himmler, who at times acted as Straßer's adjutant.

Career in the early NSDAP

Soon, Gregor Straßer was leading a völkischer Wehrverband ("ethnic defense union"), one of several such nationalist paramilitary groups. His group joined forces with the NSDAP in 1921, which had been founded in Munich in 1919 as the Deutsche Arbeiterpartei (DAP or German Workers' Party), and which changed its name to the Nationalsozialistische Deutsche Arbeiterpartei (NSDAP or National Socialist German Workers' Party) in 1920. His leadership qualities were readily recognized and he was soon appointed as regional head of the SA in Lower Bavaria.[3] In November 1923 he took an active part in the miscarried Beer Hall Putsch. In a special part of the high treason trial against Adolf Hitler and his accomplices, Straßer was sentenced to one and a half years of Festungshaft (confinement in a fortress, which was regarded as an honorable detention in the German Empire) in Landsberg Prison by Volksgericht München I in April 1924. After a few weeks Straßer was released because he had been elected a member of Bavarian Landtag for the National-socialist-associated Völkischer Block on 4 May 1924.

On 7 December 1924 he attained a seat in the Reichstag of the Weimar Republic. He had run under the party banner of the Deutschvölkische Freiheitspartei (German People's Freedom Party), which served as a substitute organization for the NSDAP (which was banned in Bavaria starting in November 1923 after the abortive putsch).[4] Straßer kept this position until December 1932.

After the official refoundation of the NSDAP by Adolf Hitler in the Munich Bürgerbräukeller on 26 February 1925, Straßer became the first Gauleiter of Lower Bavaria/Upper Palatinate and, after the partition of this Gau (German), Lower Bavarian Gauleiter from October 1, 1928 until 1929.

Because Strasser led up to 2,000 men in Landshut and was overworked, he began looking for an assistant. Heinrich Himmler, who obtained the job as Sekretär, was tasked with expanding the organization in Lower Bavaria. In December 1926, Straßer's Gau merged with that of the Upper Palatinate and Strasser headed the enlarged Gau. After a subsequent partition on 1 October 1928, the Upper Palatinate was taken over by Adolf Wagner while Straßer continued as Gauleiter of Lower Bavaria until 1 March 1929.

From 30 June 1926 until early 1928 he was NSDAP Reichspropagandaleiter (NSDAP Reich Leader for Propaganda) and from January 1928 until December 1932 he was the Reichsorganisationsleiter (Reich Organization Leader). Gregor Straßer reorganized the whole NSDAP structure, both in its regional formation and its vertical management hierarchy. The National Socialist Party became a strictly centralist organization with the party's own control machinery and high propaganda capability. Straßer's ideas for restructuring the National Socialist Reich Organization Leadership had been carried into effect by service regulations called Politische Organisation - P.O. - (Political Organization - P.O.) of the NSDAP on 15 July 1932.

After 1925, Straßer's organizational skills helped the NSDAP to make a big step from a marginal South German splinter party to a nationwide mass party, appealing to the lower classes and their tendency towards socialism. Its membership increased from about 27,000 in 1925 to more than 800,000 in 1931. Straßer established the NSDAP in northern and western Germany. Moreover he arranged for the foundation of the Berlin SA (Stormtroopers) under Upper Silesian National Socialist activist Kurt Daluege in March 1926. The party's own Foreign Organization (see NSDAP/AO) was formed on Straßer's initiative, and Dr. Hans Nieland was appointed its first leader on 1 May 1931. Together with his brother Otto, Straßer founded the Berlin Kampf-Verlag (Combat Publishing) arm in March 1926, which published among others the programmatic weekly journal Der Nationale Sozialist (The National Socialist) from 1926 until 1930.

The Straßer brothers ruled the Berlin party organization unchallenged and developed an independent ideological profile from the south German party wing around Adolf Hitler. They advocated - at first together with Gregor Straßer's close collaborator in Rhineland and Westphalia Joseph Goebbels - an anti-capitalist for NSDAP. With the Arbeitsgemeinschaft Nordwest (Syndicate Northwest), a federation of north and west German NSDAP Gauleiter under his leadership (managing director was Joseph Goebbels) founded in 1925, Gregor Straßer had created an instrument to enforce the sociopolitical and economic ideas of the left NSDAP wing. But on February 14, 1926 Hitler asserted himself successfully against this left-wing faction during the Bamberg Conference. This earned Hitler absolute leadership within the NSDAP. The disbandment of the syndicate was decreed by a directive from Munich on July 1, 1926.

The programmatic and personal rivalry with Adolf Hitler worsened dramatically when Reichskanzler Kurt von Schleicher offered Straßer the vice-chancellorship and the office of the Prussian Prime Minister in December 1932. Von Schleicher hoped to disunite the NSDAP with Straßer's help and to pull the left National Socialists around Straßer over to his national conservative side, as to prevent a revolution or takeover by Hitler. The plan failed because of Hitler's intervention, and resulted in Straßer's resignation from all party positions. He continued acting as a publicist as he did before his disempowerment. From June 1931 until its ban on February 4, 1933 he published the weekly newspaper Die Schwarze Front (named after Otto Straßer's Black Front political organisation), which made little impact on contemporaries because of its small circulation (10,000 copies).

During the Night of the Long Knives, which was called officially "Röhm-Putsch" by the National Socialist propaganda, Straßer was imprisoned and then assassinated by the Berlin Gestapo on June 30, 1934. The assassins shot through a window into Straßer's cell, eventually killing him.

Fritz Günther von Tschirschky, one of Franz von Papen's staff members who was kidnapped and taken to Gestapo headquarters, claimed to be witness to the murder. According to his memoirs, Straßer was assassinated in an adjoining cell in the basement by an SS hit squad shooting his temple and back of the head several times.[5] Tschirschky himself could not watch the execution directly, because guards were blocking the way. But minutes later, he saw guards carrying some bloody bags out. He concluded that "the murdered must have been dismembered shortly after the crime and his body parts carried outside."[6] However, all of this information is unsubstantiated.

His body was cremated, and, on 7 July 1934, an urn containing his ashes was delviered to his brother Anton, a former member of the Allgemeine SS, who brought it to the widow.[7] The payout of Straßer's life insurance – which the insurance company only refused on the grounds that, according to official information, Straßer had died by suicide – was only made through the intervention of Interior Minister Wilhelm Frick. From 1 May 1936, on Heinrich Himmler's instigation, Straßer's widow received a monthly pension of 500 Reichsmarks. This was composed of RM 300 for herself and RM 100 for each of her two sons. She was to have this award for life, while the payment to her sons would be discontinued when they reached the age of 25 years.

The urn remained in the possession of Straßer's widow for several decades and was finally buried on 28 June (other sources claim in May) 1975 at her instigation in the Straßer family grave in the Dinkelsbühl cemetery next to Straßer's parents and his brother Otto (d. 1974). A plaque commemorates Gregor Strasser, his brother Anton and the twins Helmuth and Günther.

On 15 April 1920, Straßer married his fiancée of some years Elisabeth "Else" Anna Maria Vollmuth (1893–1982), the daughter of the wealthy wood industrialist Lorenz Rudolf Vollmuth. Else was charming, tall, slim, blond and considered very good-looking. The happy marriage resulted in twins, born in Traunstein, who would die on the Eastern Front: