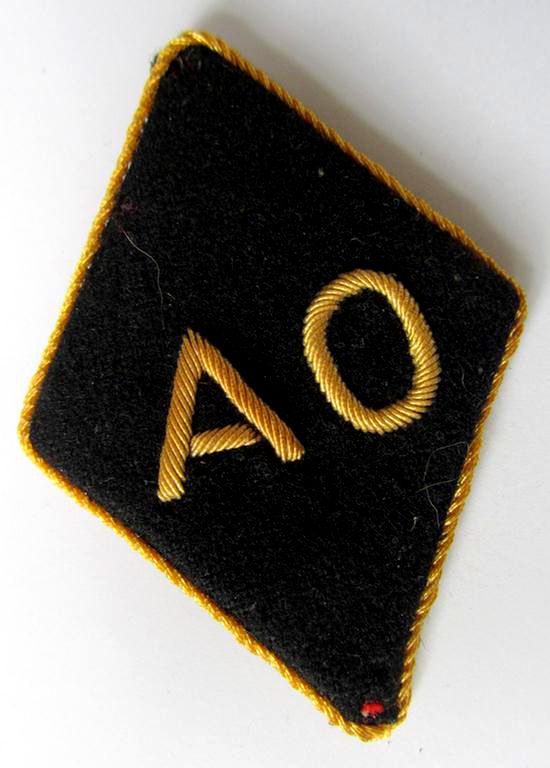 Sleeve diamond (Ärmelraute) of the NSDAP/AO 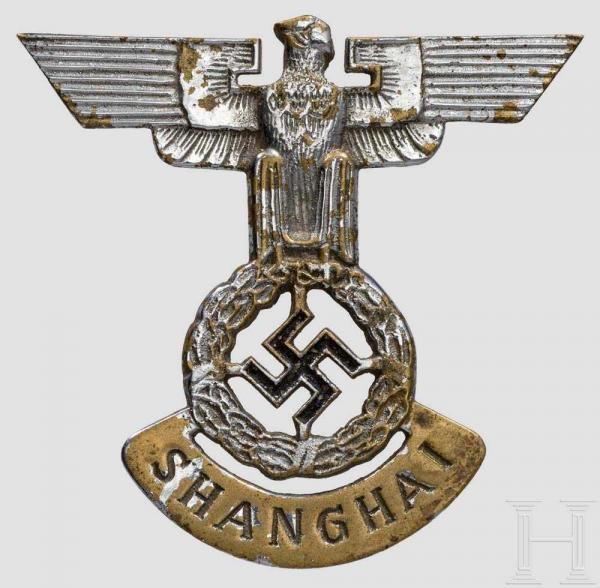 Pin for members of the NSDAP/AO in Shanghai (China)

The party members who lived outside the German Reich were pooled in this special NSDAP department. On May 1, 1931 the new organizational unit was founded on the initiative of Reich Organization Leader (German: Reichsorganisationsleiter) Gregor Strasser and its management was assigned to Dr. Hans Nieland. But Nieland resigned from office already on May 8, 1933, because he had become head of the Hamburg police authorities in the meantime and later on a member of the Hamburg provincial government. Hereupon Ernst Wilhelm Bohle was appointed director of the "AO", which served as the 43rd and only non-territorial Gau of the NSDAP. Only actual citizens of the German Reich – Imperial Germans (German: Reichsdeutsche) – with a German passport could become members of the AO. Persons of German descent, so called ethnic Germans (German: Volksdeutsche), who possessed the nationality of the country in which they lived, were refused access to the National Socialist Party. 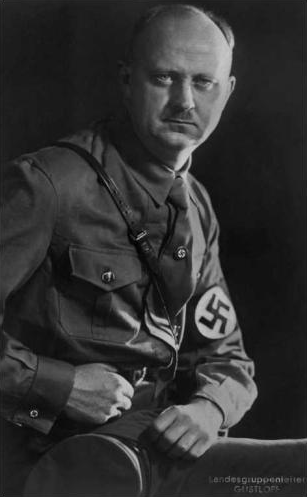 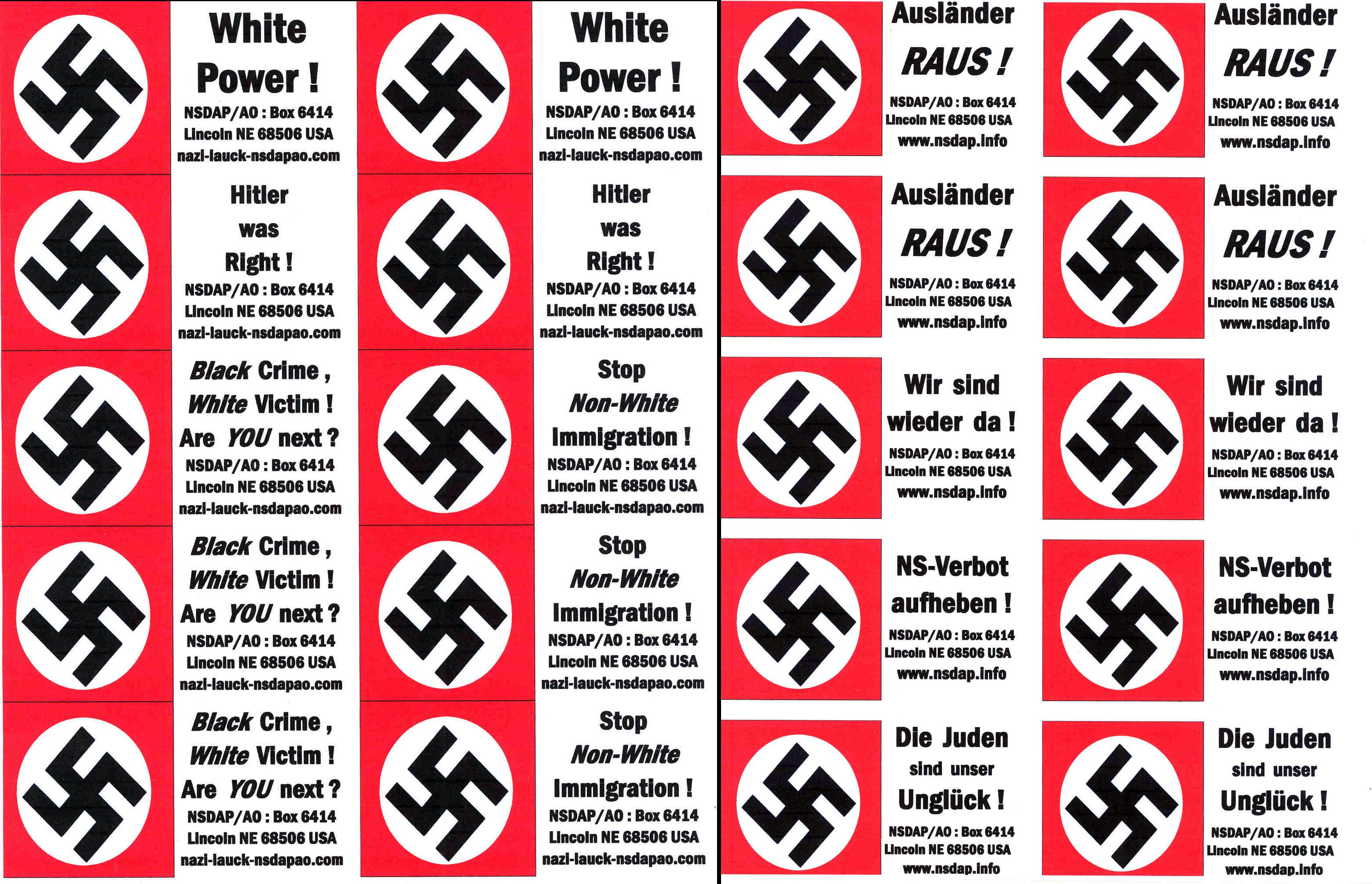 In 1928 the first party members joined forces abroad in Paraguay and in Brazil. Similar associations came into being in Switzerland and in the United States in 1930. These groups had been officially accepted by NSDAP only after the foundation of the Auslands-Organisation: On August 7, 1931 Local Group Buenos Aires, shortly afterwards National Committee Paraguay (August 20, 1931) and Local Group Rio de Janeiro (October 5, 1931). From 1932 until its prohibition in 1934 there existed a national committee in the Union of South Africa, which enjoyed great popularity (see German Namibians) and maintained numerous offices in former German South-West Africa (today Namibia). NSDAP Local Groups (German: Ortsgruppen) comprised 25 party comrades (German: Parteigenossen) at least, so called Stützpunkte (English: bases) had 5 members or more. Furthermore, big Local Groups could be partitioned into Blocs (German: Blöcke).

Ideological training and uniform orientation of all party comrades on the interests of the German nation were the principal tasks of the NSDAP/AO. It was assigned the mandate of uniting all NSDAP party members (and members of NSDAP-affiliated organizations) living abroad in a loosely affiliated group and to educate them in the philosophy, ideology and the political program of the NSDAP for the betterment of Germany. The AO was not a Fifth Column organization and had ten basic principles to be followed that included:

These, and the other principles, were intended to create a feeling of amiability towards Germans and Germany in general and hopefully convince as many foreigners as possible that the NSDAP was the right choice for Germany and as result, the rest of the world.

In the Dominican Republic

By the early 1940s, the NSDAP/AO had around 50 organized members in the Dominican Republic, a relatively large number considering that the German-born population in the country stood at around 150 with an additional 300 persons of German descent. NSDAP had organized groups in five Dominican cities: Santo Domingo, Puerto Plata, Montecristi, Cibao Valley and San Pedro de Macorís[1]

NSDAP/AO had a Landesgruppe Schweden. During the first years of the Second World War it was led by W. Stengel, but the leadership was later taken over by the German diplomat Heinz Gossmann. There were several ortsgruppe in different parts of Sweden, such as Göteborg, Borås, etc..[2]

The NSDAP/AO is an American national organization. It was founded in 1972 by United States citizen Gary Rex Lauck (born in 1953) in Lincoln, Nebraska. The organization stands for "NSDAP Aufbau- und Auslandsorganisation" (English: NSDAP Development and Foreign Organization). Lauck's organization supplies National Socialists worldwide with propaganda material. Since 1973 this new NSDAP/AO publishes National Socialist periodicals in several languages. As one of its political aims it declares the readmission of NSDAP as an eligible party in Germany.