From Metapedia
(Redirected from Victoria of the United Kingdom)
Jump to: navigation, search 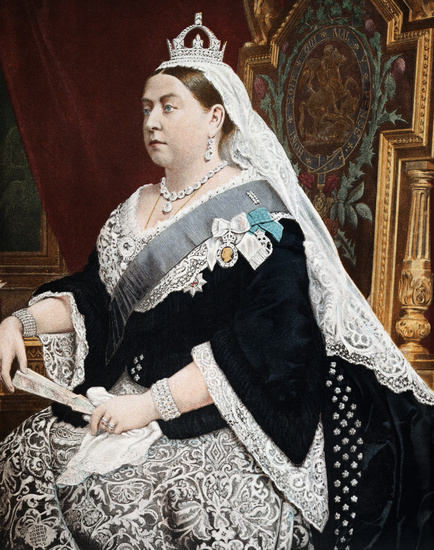 Victoria (Alexandrina Victoria; ᛉ 24 May 1819 in Kensington Palace, London; ᛣ 22 January 1901 in Osborne House, Isle of Wight) was Queen of the United Kingdom of Great Britain and Ireland from 20 June 1837 until her death. On 1 May 1876, she adopted the additional title of Empress of India. The last British monarch of the House of Hanover, she was succeeded by her son Edward VII of the House of Saxe-Coburg and Gotha.

Victoria's father of German descent was Prince Edward, Duke of Kent and Strathearn, the fourth son of the reigning King of the United Kingdom, George III. Until 1817, Edward's niece, Princess Charlotte of Wales, was the only legitimate grandchild of George III. Her death in 1817 precipitated a succession crisis that brought pressure on the Duke of Kent and his unmarried brothers to marry and have children. In 1818 he married Princess Victoria of Saxe-Coburg-Saalfeld, a widowed German princess with two children—Carl (1804–1856) and Feodora (1807–1872)—by her first marriage to Emich Carl, 2nd Prince of Leiningen. Her brother Leopold was Princess Charlotte's widower. The Duke and Duchess of Kent's only child, Victoria, was born at 4:15 a.m. on 24 May 1819 at Kensington Palace in London. After the deaths of her father and grandfather in 1820, she was raised under close supervision by her mother. She inherited the throne aged 18 after her father's three elder brothers died without surviving legitimate issue.

By 1836, Victoria's maternal German uncle Leopold Georg Christian Friedrich von Sachsen-Coburg-Saalfeld, Herzog in Sachsen, who had been King of the Belgians since 1831, hoped to marry her to German Prince Albert, the son of his brother Ernest I, Duke of Saxe-Coburg and Gotha. Leopold arranged for Victoria's mother to invite her Coburg relatives to visit her in May 1836, with the purpose of introducing Victoria to Albert. Victoria continued to praise Albert following his second visit in October 1839. Albert and Victoria felt mutual affection and the Queen proposed to him on 15 October 1839, just five days after he had arrived at Windsor. They were married on 10 February 1840, in the Chapel Royal of St James's Palace, London. Victoria was love-struck. During Victoria's first pregnancy in 1840, in the first few months of the marriage, 18-year-old Edward Oxford attempted to assassinate her while she was riding in a carriage with Prince Albert on her way to visit her mother. Her daughter, named Viktoria Adelheid Marie Luise, was born on 21 November 1840 and would later marry German Emperor Frederick III. Her famous son was Kaiser Wilhelm II. Over the following seventeen years, she and Albert had a further eight children: Albert Edward (b. 1841), Alice (b. 1843), Alfred (b. 1844), Helena (b. 1846), Louise (b. 1848), Arthur (b. 1850), Leopold (b. 1853) and Beatrice (b. 1857).