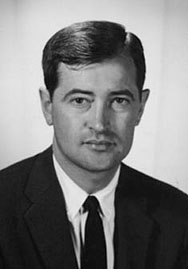 Willis Allison Carto (17 July 1926 – 26 October 2015) was an American patriot and populist activist, known primarily for his work in the alternative media in the United States as a publisher. Some of his best work involved groups and newspapers such as the Liberty Lobby, The Spotlight newspaper, The Institute for Historical Review, The Barnes Review, and American Free Press. Because of his sterling work in the pursuit of truth and freedom, Carto has been one of the most attacked and demonized personalities in American politics during the 20th century. During his career Carto was in both camps of the conservative and nationalist movements, having friends and contacts wirh Republican politicians as well as marginalized racists and antisemites.[1]

Carto's family is of old colonial-stock. The name derives from "Carteaux", a French-Huguenot name. Carto himself was born in Fort Wayne, Indiana. After graduating from high school in 1944 he served in the U.S. Army for two years in the Philippines and the during the occupation of Japan. He was wounded in battle on Cebu Island, May 5, 1945.

After the war he attended college at Denison University in Granville, Ohio and the University of Cincinnati. In 1950, Carto began his business career working for Proctor & Gamble as a salesman. In San Francisco, he worked for Household Finance as a loan officer.[2]

In November 1958, he married Elisabeth Waltraud Oldemeir from Herford, Germany.[3] By this time he was already several years into nationalist politics.

Carto's career as a publisher in the alternative media began in-earnest in 1953. What followed was an unprecedented career of publishing, in which he published hundreds of patriotic and race realist books, dozens of periodicals, and several magazines. He founded or helped found Liberty Lobby, The Spotlight newspaper, The Institute for Historical Review, The Barnes Review, and American Free Press. As of 2010, he continues his work as a publisher of nationalist material through The Barnes Review and American Free Press.

Carto entered the world of patriotic and pro-European American publishing in early 1950s. He was, by this time (his mid-to-late 20s), already successful in business. These were hard times to be a nationalist in the racially-European world, and most nationalists retreated into bland conservatism or simply became apolitical. Carto did not.

In 1953, he founded "Liberty & Property, Inc." (with Aldrich Blake) and published the first edition of seven which followed of the First Nation Directory of “Rightist” Groups, and Organizations in the United States and Some Foreign Countries.

Carto publisher or helped publish numerous patriotic newspapers and newsletters, giving a voice to, and helping to organize, a section of U.S. political thought that was largely unrepresented between the early 1940s (when it was demonized and suppressed [see 1944 Sedition Trial]), through around 2000, with the rise of the Internet. The more long-format medium of the magazine was also used -- and continues to be used -- by Carto.

In 1955, he began publication of the monthly RIGHT newsletter, the first of many such publications to come. Also around this time Carto was associated with Robert Le Fevre and the Congress of Freedom. Carto published the Liberty Letter from 1960, an organ for the supporters of Liberty Lobby. He published and edited the less-overtly-nationalist Washington Observer Newsletter from Aug 15, 1965 through Sept. 15, 1976. In one of these newsletters he discusses a legal matter he was involved in and reveals through a deposition he identifies himself as a "Pantheist".[4]

In 1975 he began publication of The Spotlight a weekly tabloid newspaper, which continued publication through the 1990s. As a result of a legal dispute, Spotlight was forcibly discontinued by a court. Carto immediately began publication of the American Free Press, a weekly newspaper, to fill the void. The legacy of these newsletters was to inspire many subsequent publications, from the monthly newsletter of Wilmot Robertson, to the newsletter of American Renaissance. In 1994 Carto founded The Barnes Review a bimonthly "magazine of authentic history", after loosing control of The Journal of Historical Review.

In 1979 he founded the Institute for Historical Review, to investigate from an independent position some of the dubious claims made about World War II, pertaining principally to alleged Jewish casualties. Publication soon began of the scholarly Journal of Historical Review, which dealt with "setting history into accord with the facts", in the oft-cited phrase used by Carto from historian Harry Elmer Barnes.

Carto and associates also organized the first International Revisionist Conference in Los Angeles, which was followed by ten others until 1993. The first issue of the monthly IHR Newsletter was published in January 1981, followed by 90 others until late 1993. In 1994, the Barnes Review was formed as a successor to the Journal of Historical Review. The Institute for Historical Review continues to exist under different leadership.

Countless books would have been lost to obscurity, or lack of financing would have caused them to never make it to the presses. Most of these were published under the auspices of either The Noontide Press, the The Institute for Historical Review, or more lately Barnes Review Books. All these publishing houses were founded by Carto. All of them still exist and continue to publish.

The most prominent among the books Carto "saved" is probably Imperium by Francis Parker Yockey. Written in the late 1940s, the book was a magnum-opus of European identity politics, but had only a small publication run for lack of funds. When Carto discovered it, he made sure it got a serious publication run. He has continued to publish it intermittently since. Carto's personally-written introduction to Imperium -- recounting his meeting with Yockey shortly after the latter was arrested and shortly before his mysteriously death -- has been very popular as well. (It has since been argued that actual author of the introduction was Dr. Revilo P. Oliver, Carto's colleague).

A great number of revisionist titles were published by Carto, including The Hoax of the Twentieth Century. The history of revisionist publishing would be very different were it not for Carto.

Carto has always primarily been a publisher, but he also formed and helped lead a number of political groups.

The most successful of these is probably Liberty Lobby, which he founded on an anti-communist and pro-European American platform in 1960. It rose to become one of the most prominent patriotic groups in postwar U.S. history. It featured a radio call-in program at Carto's suggestion, predicting the rise of talk-radio 30 years beforehand.