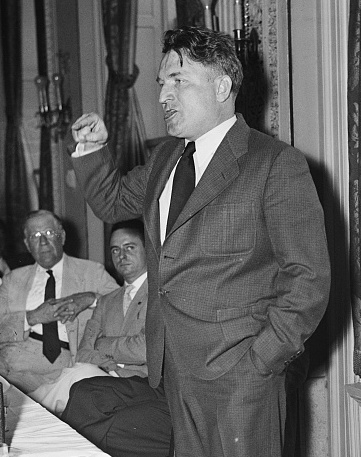 Reverend Gerald Lyman Kenneth Smith (February 27, 1898 – April 15, 1976) was an American clergyman and nationalist political leader for three decades. He was an advocate of Huey Long’s Share Our Wealth movement and a presidential candidate for the America First Party in 1944 and the renamed Christian Nationalist Party in 1948. He started several nationalist organizations and became the foremost American nationalist leader during the post-war period. Gerald Smith was a dynamic speaker. H. L. Mencken called him “the greatest orator of them all.”[1]

Smith was born in Pardeeville, Wisconsin and grew up in nearby Viroqua. His family’s roots were in the South and border states dating back to the pre-Revolution period of the 1600s.[2]

Gerald Smith was ordained as a minister in the Disciples of Christ denomination of Christianity in 1916. He attended Valparaiso University in Indiana--at the time known as the "poor man’s Harvard"--where he earned a degree in oratory in 1918. In 1922, Smith married Elna Marion Sorenson who became his lifelong companion and co-worker in his ministry and political activities. Both of her parents were of Danish background.[3] They adopted a son, Gerald Jr., whom the called "Gerry".[4]

They moved to Louisiana in 1928. Elna had contracted tuberculosis and Shreveport had a good reputation for helping people with the disease. Smith served as a minister in Shreveport, making radio broadcasts attacking local utility companies and corruption while supporting trade unions.

Gerald Jr. was in military school for six years and was drafted into the US Army. Because of his father’s notoriety he remained a “buck private” serving in India and Burma as a “mule skinner”. He volunteered for a suicide mission serving with Merrill's Marauders in Burma where two thirds of his units were killed.[5] Gerald Jr. was awarded a Purple Heart, a Silver Star, and a Presidential citation.[6]

Gerald L.K. Smith and his wife were members of William Dudley Pelley’s Silver Shirt organization for a brief period in July and August of 1933.[7] Smith would later explain to a reporter this was an honorary membership and that he was never affiliated with the Silver Shirt organization.[8] Shortly thereafter, Smith began to work with Governor Huey Long of Louisiana. Smith and Long launched the Share Our Wealth society as a response to the Great Depression. This movement proposed minimum and maximum limits on household wealth and income. Smith resigned his ministry and worked recruiting members to the society.

Gerald Smith was present when Governor Huey Long of Louisiana was assassinated in 1935. Smith believed the Jewish assassin wanted to kill both of them.[9]

Smith took over the society taking the movement into a populist nationalist direction moving the headquarters to New York. Smith blamed President Roosevelt for Huey Long’s assassination seeing him as the mastermind in his mentor's death.[10] Smith would also believe the Long assassination was part of a Jewish conspiracy with roots going back to Vienna.[11]

Committee of One Million

In April 1937 Smith along with Pat Powers founded the Committee of One Million to solicited funds and to buy radio airtime. The Committee was based in New York City and held an average of three meetings per week at the Hotel Pennsylvania for the first three months of 1938. One of the radio stations in Detroit proved successful and he moved his operations to the Michigan city in 1939. In 1944 Smith said he had 26 people working in his Detroit office putting out 3,000 to 6,000 pieces of mail a day to a mailing list of three million.[12]

In Detroit, Smith began to broadcast over WJR covering most of the Midwest. With the support of Henry Ford,[13] Smith ran for the United States Senate out of Michigan as a Republican but he lost in the primary with 130,000 votes.

Smith entered an alliance with Francis Townsend, Father Charles Coughlin and Huey Long followers to form the Union Party. The party nominated William Lemke as their Presidential candidate in the 1936 election.

In 1942 Smith started The Cross and The Flag magazine to replace Father Coughlin’s Social Justice magazine which had been banned by the Justice Department from the mail.

In January 1943 Smith formed the America First Party. Smith ran as the candidate of the party in the 1944 Presidential election, winning 1,781 votes (1530 in Michigan, 281 in Texas). The FBI reported in an internal memo that the American First Party vote total was "short-counted" as much as ninety percent.[14]

Around 1946, Gerald Smith formed the Christian Nationalist Crusade. This group would later become affiliated with and about 60 right wing organizations or front groups started by Smith. In 1947, he moved his operations from Detroit to St. Louis, Missouri but chose to live in nearby Tulsa, Oklahoma.

In 1948 with running mate Harry Romer on the Christian Nationalist Party ticket he received 48 votes.

During the 1950s Smith made a determined effort to influence and contact Arab governments who took a rejectionist stance against the state of Israel. In 1952 Smith contacted the Egyptian embassy and met one of her representatives Colonel Mohammed Abdel Halim Khalifa in Chicago who at the time was attending the Republican Party National Convention as an observer. The previous year Smith was attending Egyptian diplomatic gatherings in New York and meeting Arab representatives from Syria, Lebanon, Iraq and Saudi Arabia.[15]

At their initial meeting Smith was boastful of his contacts with Syrian-Lebanese clubs in the US. He impressed Colonel Khalifa and promised to become an advocate for the Arab position within the two major political parties.[16] At the time, Smith had allies in the American political system, with greater influence among Republicans than Democrats.

The next year Smith contacted Egypt’s ambassador to the United Nations and sold him a hundred subscriptions of his magazine The Cross and The Flag.[17] The issues presumably would be sent to Egypt’s political elite. Up to this time Gerald Smith had little use for the UN and fought against its establishment.

Gerald Smith was a prolific writer as well as an orator. He wrote over five hundred different pieces of literature representing books, tracts and pamphlets. He wrote 90 percent of his magazine The Cross and The Flag. In total it has been estimated his writings surpassed the length of the Encyclopedia Britannica.[18]

From Detroit he moved his headquarters to St. Louis in 1947, to Tulsa in 1949, and to Glendale, California near Los Angeles in May 1953. Smith moved to Eureka Springs, Arkansas in 1964 and began construction on a religious theme park. The park was never fully developed as originally planned. However, in 1966 the centerpiece of his plan, the Christ of the Ozarks statue, was completed, overlooking the town on Magnetic Mountain at an elevation of 1500 feet. The sculptor, Emmet Sullivan, had worked under Gutzon Borglum as one of the sculptors of Mount Rushmore. Smith also had plans for a life-size recreation of ancient Jerusalem in the hills near Eureka Springs. While this was never fully realized, each year an outdoor passion play inspired by that of Oberammergau, Germany is staged on a set over one-tenth of a mile long located not far from the statue.

Smith died in 1976 of pneumonia at the Glendale (California) Community Hospital. Smith and his wife are buried adjacent to the Christ of the Ozarks Statue.

The Jews did what they could to stop Smith and his movement. One tactic the ADL used was to put pressure on his printers to stop his publishing efforts.[19]

Smith was critical of the Masons and claimed they exerted a sinister influence against him when he was living in Michigan.[20]