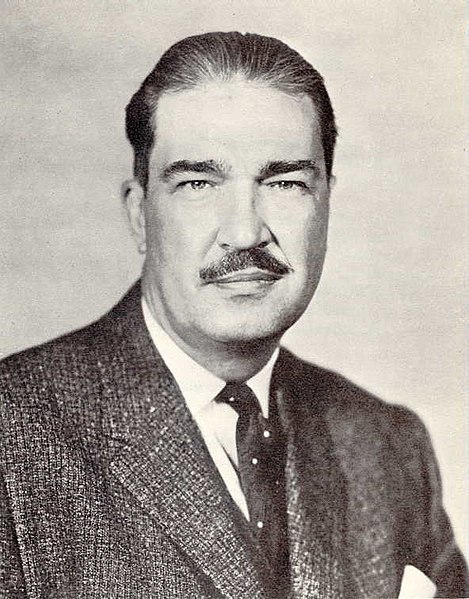 Revilo Pendleton Oliver (July 7, 1908 — August 10, 1994) was an American Classics professor at the University of Illinois at Urbana-Champaign. He wrote and crusaded extensively for Anti-Communist and White nationalist causes.

Oliver helped to found National Review and the John Birch Society. He broke with mainstrean American conservatism in the late 1960s; as it had moved to far to the left.

Oliver briefly received national notoriety in the 1960s when he published an article following the Kennedy assassination, suggesting that Lee Harvey Oswald was part of a Communist conspiracy against the American Right; in response, Oliver was called to testify before the Warren Commission.[1][2]

Oliver was an editorial advisor for the Institute for Historical Review, and a regular contributor to the pro-National Socialist periodical, Liberty Bell.

Oliver was born near Corpus Christi, Texas on July 7, 1908. He attended two years of high school in Illinois. Disliking the severe winters, and once requiring hospitalization "for one of the first mastoidectomies performed as more than a daring experiment," he moved to California. He began the study of Sanskrit, using Max Müller's handbooks and Monier Williams' grammar, later finding a Hindu missionary to provide tuition. As an adolescent, he found amusement in going to watch evangelists "pitch the woo at the simple-minded", attending performances of Aimee Semple McPherson and Katherine Tingley. He entered Pomona College in Claremont, California, when he was sixteen.

In 1930, Oliver married Grace Needham. He began attending the University of Illinois and studied under William Abbott Oldfather. His first book was an annotated translation, from the Sanskrit, of Mricchakatika (The Little Clay Cart) published by the University of Illinois in 1938. He received the degree of Philosophiae Doctor in 1940. That same year, the University published his Ph.D. thesis: Niccolò Perotti's translations of the Enchiridion (republished in 1954 as Niccolo Perotti's Version of the Enchiridion of Epictetus, with an Introduction and List of Perotti's Writings). He began teaching graduate classes immediately after receiving the degree. For a number of years he also gave graduate courses in the Renaissance, which put him also in the Department of Spanish and Italian.

During the Second World War, Oliver worked with distinction at the U.S. Army Signal Corps installation, Arlington Hall, in cryptanalysis. From 1942 until the autumn of 1945, he came to be in charge of a rapidly expanding department, and advanced from Analyst to Director of Research (eventually responsible for the work of about 175 persons). He claimed that in his privileged position, he learned what he called "the ultimate secret of Pearl Harbor" (that Franklin Roosevelt had incited the Japanese into the attack).[3]

Oliver left Washington D.C. (which he called the "District of Corruption") in 1945. He was convinced that within a few years, the facts of pro-Soviet actions and other operations would become known, and the American people would react with a violent "housecleaning" of the government. Confident that the future popular reaction was inevitable, Oliver returned to the University as an Assistant Professor, became an Associate Professor in 1947, and Professor in 1953. He held a Guggenheim Fellowship in 1946–7, and a Fulbright (Italy), 1953–4.

In 1955, Oliver's friend, Professor Willmoore Kendall, discussed plans for the journal which was eventually called National Review. Kendall "desiderated a 'conservative' antidote to the New Republic, etc.," and had among his pupils at Yale, William F. Buckley Jr.. Kendall convinced Oliver to write on political subjects for the journal.[4]

In 1958, Oliver joined Robert Welch in being one of the founding members of the anti-Communist John Birch Society. Oliver wrote frequently for the Birch Society magazine American Opinion, his most widely-noted piece being a two-part article called "Marxmanship in Dallas" which asserted that Lee Harvey Oswald had carried out the assassination of President Kennedy as part of a Communist conspiracy. In Oliver's view, the Communists wished to eliminate Kennedy as a puppet who had outlived his usefulness and place the blame on "right-wingers". Oliver testified before the Warren Commission on the basis for his assertions. He was reprimanded over his remarks by the University of Illinois' Board of Trustees, but they did not try to unseat him.[5]

In the 1960s, Oliver broke with conventional American conservatism having become convinced that Welch had either cozened him from the start or sold out later, and severed his connections with what he called "the Birch hoax." He thus came to openly embrace an essentially National Socialist worldview, ghostwriting the introduction to Francis Parker Yockey’s Imperium and giving credit to Willis Carto as author. Oliver helped to organize Carto’s National Youth Alliance which later came under the control of Dr. William Pierce.

Oliver believed that religion was one of the major weaknesses of his nation and civilization. An atheist and materialist, he characterized Christianity as "a spiritual syphilis," which "has rotted the minds of our race and induced paralysis of our will to live."[6]

He also used the pen names "Ralph Perrier" (for The Jews Love Christianity and Religion and Race) and "Paul Knutson" (for Aryan Asses). In addition Revilo Oliver was the actual author of the Introduction (credited to Willis A. Carto) to Francis Parker Yockey's Imperium.

"Revilo P. Oliver" is a palindrome--a phrase that reads the same backwards and forwards. One of his articles was denounced as a transparent fraud because the palindrome looked suspicious. According to Oliver, it was a family custom that went back six generations.[7]

Part of this article consists of modified text from Wikipedia, and the article is therefore licensed under GFDL.
Retrieved from "http://en.metapedia.org/m/index.php?title=Revilo_P._Oliver&oldid=464783"
Categories: