From Metapedia
(Redirected from Jewish hat)
Jump to: navigation, search 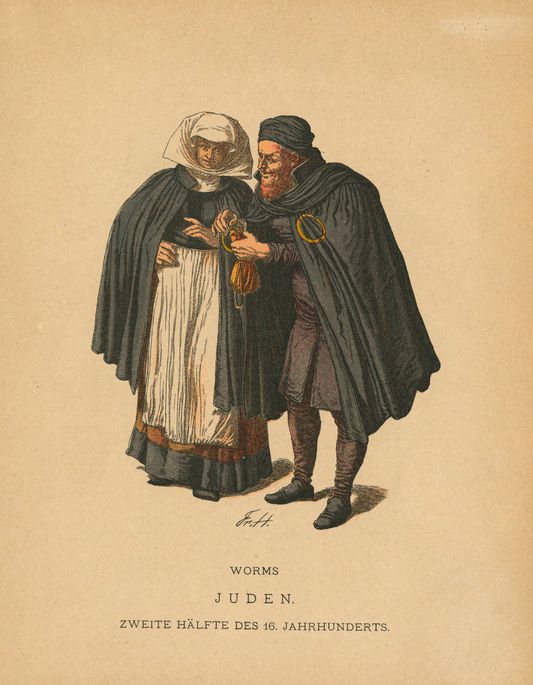 16th century drawing of two Jews from Worms in the Holy Roman Empire of the German Nation, each wearing the required yellow ring (Judenring or Judenkreis), and the man holding a moneybag and a garlic bulb, origin of the Foetor Judaicus; Other markers have also been used, such as turbans and Jewish hats (Judenhut), not identical with modern Jewish forms of male headgear.

The yellow badge (or yellow patch), also referred to as a Jewish badge, was a cloth patch that Jews were ordered to sew on their outer garments in order to mark them as Jews in public. In both Christian and Islamic countries, persons not of the dominant religion were intermittently compelled by sumptuary laws to wear badges, hats, bells or other items of clothing that distinguished them from members of the dominant religious group.

The yellow badge that was compulsory in the Middle Ages was revived by the German National Socialists and some allies during World War II. The purposes of such identifying items are not clearly explained in many politically correct sources, giving the impression that they were always applied due to irrational racism. Wikipedia even prominently alleges that they were often a "badge of shame", this based on a personal opinion in the non-scholarly book The City Of Light by Jacob D'Ancona, which is actually an account of a journey to Medieval China.

While antisemitism was less pronounced in the Muslim countries, Jews were at times treated with contempt, depending on the era and location. This was expressed through sumptuary laws that established what colors, clothing or hats they were permitted or not permitted to wear. The use of distinctive clothing or marks for Jewish and other religious communities has been traced by historians to ancient times.[1]

In the early Islamic period, non-Muslims were required to wear distinctive marks in public, such as metal seals fixed around their necks. Tattooing and branding of slaves and captives were widespread in the ancient world. However, Islam, like Judaism, forbids permanent skin markings.[2] Likewise, they were not allowed to wear colors associated with Islam, particularly green.[3] The practice of physically branding Jews and Christians appears to have been begun in early medieval Baghdad and was considered highly degrading.[4]

According to Bernard Lewis, Christians and Jews were forced to wear special emblems on their clothes. The yellow badge was first introduced by a caliph in Baghdad in the 9th century, and spread to the West in medieval times. Even in public baths, non-Muslims wore medallions suspended from cords around their necks so no one would mistake them for Muslims. Belts, headgear, shoes, armbands and/or cloth patches were also used. Under Shi'a rules, they were not even allowed to use the same baths [5] In 1005 the Jews of Egypt were ordered to wear bells on their garments.[6]

Apart from Jews, Hindus living under Islamic rule in India were often forced to wear yellow badges as well. During the reign of Akbar the Great, his general Husain Khan 'Tukriya' forcibly made Hindus wear discriminatory yellow badges[7] on their shoulders or sleeves.[8]

In Christian countries, dress codes were also imposed on Jewish and other non-Christian residents. In Europe, the Fourth Council of the Lateran of 1215 ruled that Jews and Muslims must be distinguishable by their dress (Latin "habitus")", and the yellow badge in Europe dates from this, unlike the Jewish hat (or "Judenhut"), a cone-shaped hat, which is seen in many illustrations from before this date, and remained the key distinguishing mark of Jewish dress in the Middle Ages.[9] From the 16th century, the use of the Judenhut declined, but the badge tended to outlast it, surviving into the 18th century in places.[10]

The identifying mark varied from one country to another, and from period to period. Apart from the hat, there were also attempts to enforce the wearing of full-length robes, which in late 14th century Rome were supposed to be red. The most common form of badge was the "rota" (Latin for "wheel"), which looked like a ring, of white or yellow.[11] The shape and color of the patch also varied, although the color was usually white or yellow. Married women were often required to wear two bands of blue on their veil or head-scarf.[12] Edward I of England's Statute of Jewry prescribed "the form of two Tables joined, of yellow felt of the length of six inches and of the breadth of three inches".[6] This shape — two separate strips or two joined round-topped rectangles — was particular to England.[13] In Portugal a red star of David was used.[14] Louis IX of France ordered French Jews to wear oval rouelle,[6] a version of the "rota". As with all sumptuary laws, enforcement of the rules was very variable; in Marseilles the magistrates ignored accusations of breaches, and in some places individuals or communities could buy exemption. Cathars who were considered "first time offenders" by the Catholic Church and the Inquisition were also forced to wear yellow badges, albeit in the form of crosses, about their person.

After the German invasion of Poland in 1939 there were initially different local decrees forcing Jews to wear a distinctive sign, during the General Government. The sign was a white armband with a blue Star of David on it, in the Warthegau a yellow badge in the form of a Star of David on the left side of the breast and on the back.[15] The requirement to wear the Star of David with the word Jude (German for Jew) inscribed was then extended to all Jews over the age of six in the Reich and the Protectorate of Bohemia and Moravia (by a decree issued on September 1, 1941, signed by Reinhard Heydrich[16][17]) and was gradually introduced in other German-occupied areas, where local words were used (e.g. Juif in French, Jood in Dutch). 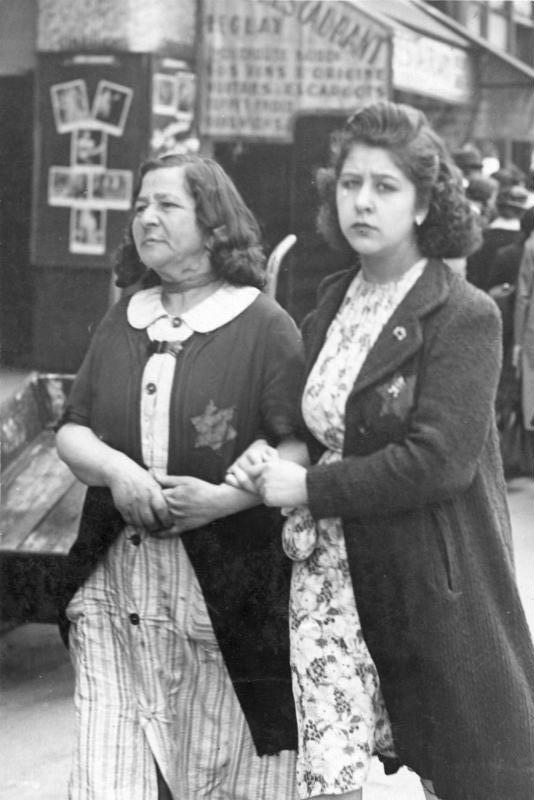 1941, August 8
All Romanian Jews have to wear the yellow badge.[33]
1941, August 13
The yellow badge was the only standardised identifying mark in the German-occupied East, other signs were forbidden. More specifically, on 18 August 1941, when Hitler was absorbed with Operation Barbarossa, Goebbels paid him a visit and showed him a copy of the book Germany Must Perish! by a Jewish American businessman, which called for the sterilization of the German people and the distribution of the German lands to other countries. Hitler was angered by it and gave Goebbels approval to immediately begin requiring all Jews to wear identifying armbands, which Goebbels on his own changed to the yellow star of David rather than the intended plain yellow and white armband.[34]
1941, September 1
Also Jewish Germans and Jews with citizenship of accessioned states (Austrians, Czechs, Danzigers) - from the age of six years - were ordered to wear the yellow badge when in public.[35]
1941, September 9
Slovakia ordered its Jews to wear yellow badges.
1941/1942
Romania started to force Jews in newly annexed territories, denied Romanian citizenship, to wear the yellow badge.
1942, March 13
The Gestapo ordered Jewish Germans and Jews with citizenship of accessioned states to mark their apartments or houses at the front door with a white badge.[36]
1942, April 29
Jewish Dutch were obligated to wear the yellow badge
1942, June 3
Jewish Belgians have to wear the yellow badge
1942, June 7
On German command, Jews in France were to wear the yellow badge.
1942, August
With the German accession of Luxembourg the yellow badge was introduced there too.
1942, August
Under German pressure Bulgaria ordered its Jewish citizens to wear small yellow buttons, contravention, however, was not prosecuted.
1942, November
With the occupation of the French Zone libre Jews there were also ordered to wear the yellow badge.
1944, March 31
After the occupation of Hungary (Unternehmen „Panzerfaust“), the Germans ordered Jewish Hungarians and Jews with defunct other citizenships (Czechoslovakian, Romanian, Yugoslavian) in Hungarian-annexed areas to wear the yellow badge.
2001
During the rule of the Islamist Taliban regime in Afghanistan, the Hindu minority in the Islamic Emirate of Afghanistan were forced to wear yellow badges in public to identify themselves as such. This was part of the Taliban's plan to segregate "un-Islamic" and "idolatrous" communities from Islamic ones.[37] The decree was condemned by the Governments of the United States and India as a gross violation of religious freedom. In the United States, the chairman of the Anti-Defamation League Abraham Foxman compared the decree to the earlier practices of National Socialist Germany.[38] Widespread protests against the Taliban regime broke out in Bhopal, India. The Government of India condemned this decree as a violation of religious freedom.[39] In the United States, congressmen and several lawmakers wore yellow badges on the floor of the Senate during the debate as a demonstration of their solidarity with the Hindu minority in Afghanistan.[40][41]
2005
In Israel, ethnicity, such as Jewish or Arab, was stated on Israeli ID cards until 2005, causing controversy. Also after 2005, the bearer's ethnicity can often be inferred by other data on the ID-card: the Hebrew calendar's date of birth is often used for Jews, and each community has its own typical first and last names. Israel also used different colors for the casings for ID-cards issued to residents of the by Israel occupied West Bank and Gaza Strip, also causing controversy. ID-cards issued by the Palestinian National Authority, issued based on Israeli approval, can still be distinguished from ID-cards issued by Israel directly.

Yellow badges in the Middle Ages

Denmark: The king against the yellow badge