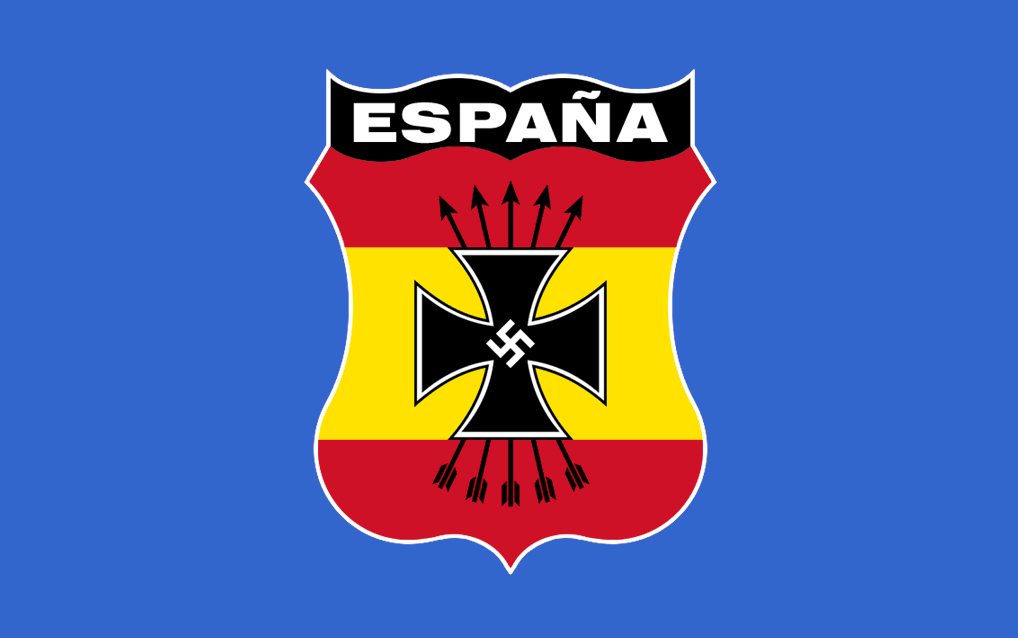 The Blue Division (Spanish: División Azul; German: Blaue Division), officially designated as División Española de Voluntarios by the Spanish Army and 250. Infanterie-Division in the German Army, was a unit of Spanish volunteers who served in the German Wehrmacht on the Eastern Front of the Second World War. Between 24 June 1941 until 20 October 1943 over 47,000 men served in the Blue Division, thousands more in the Blue Legion and other units of the German Army. 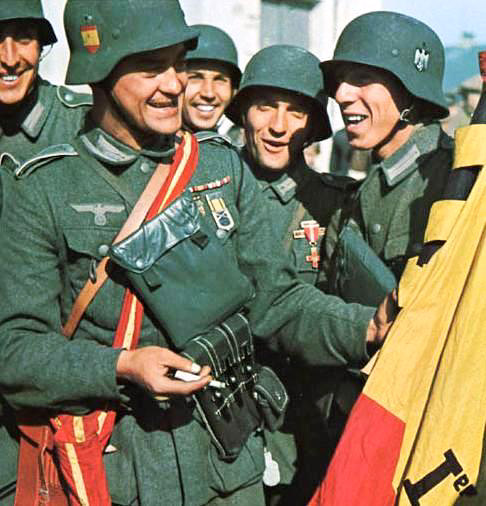 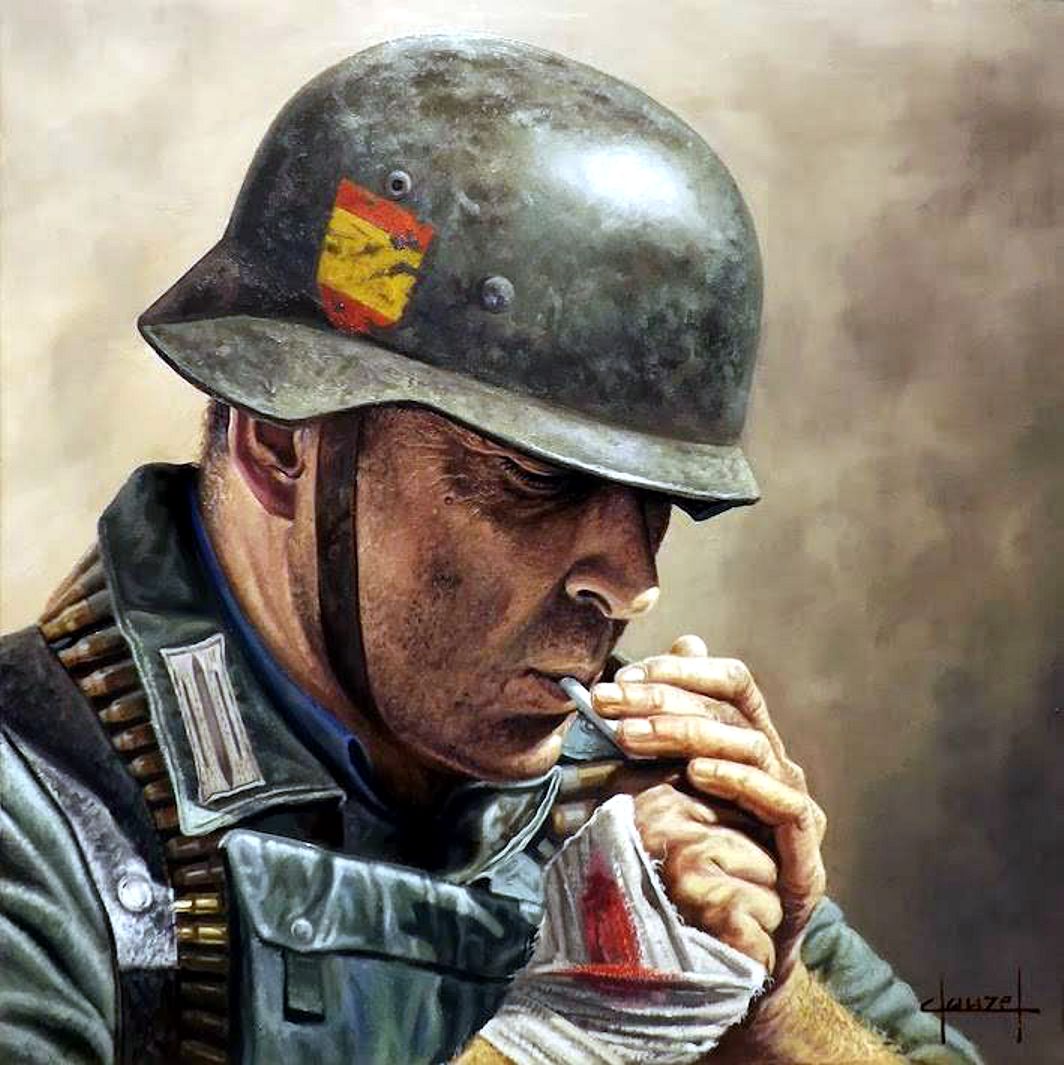 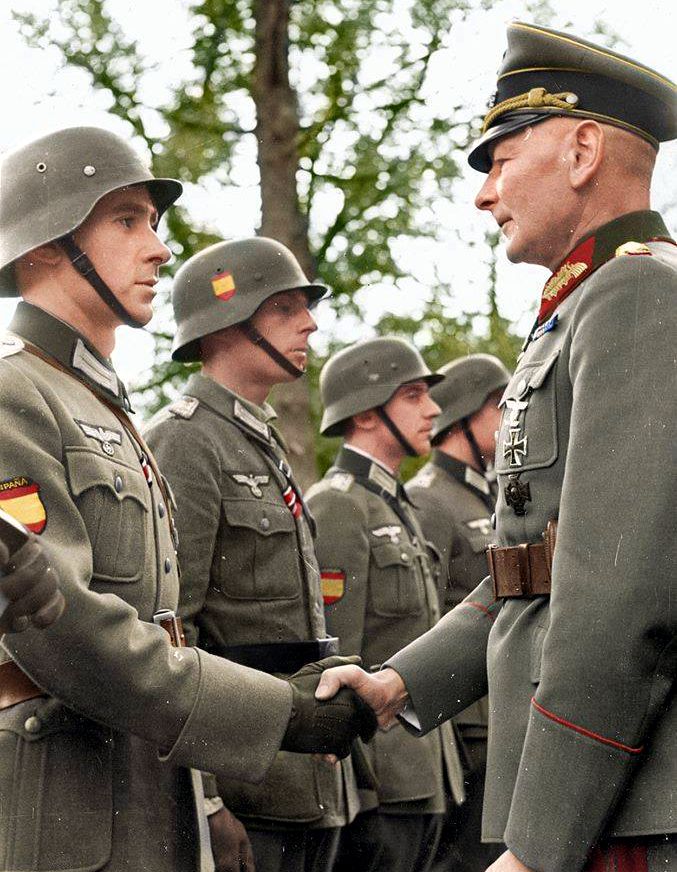 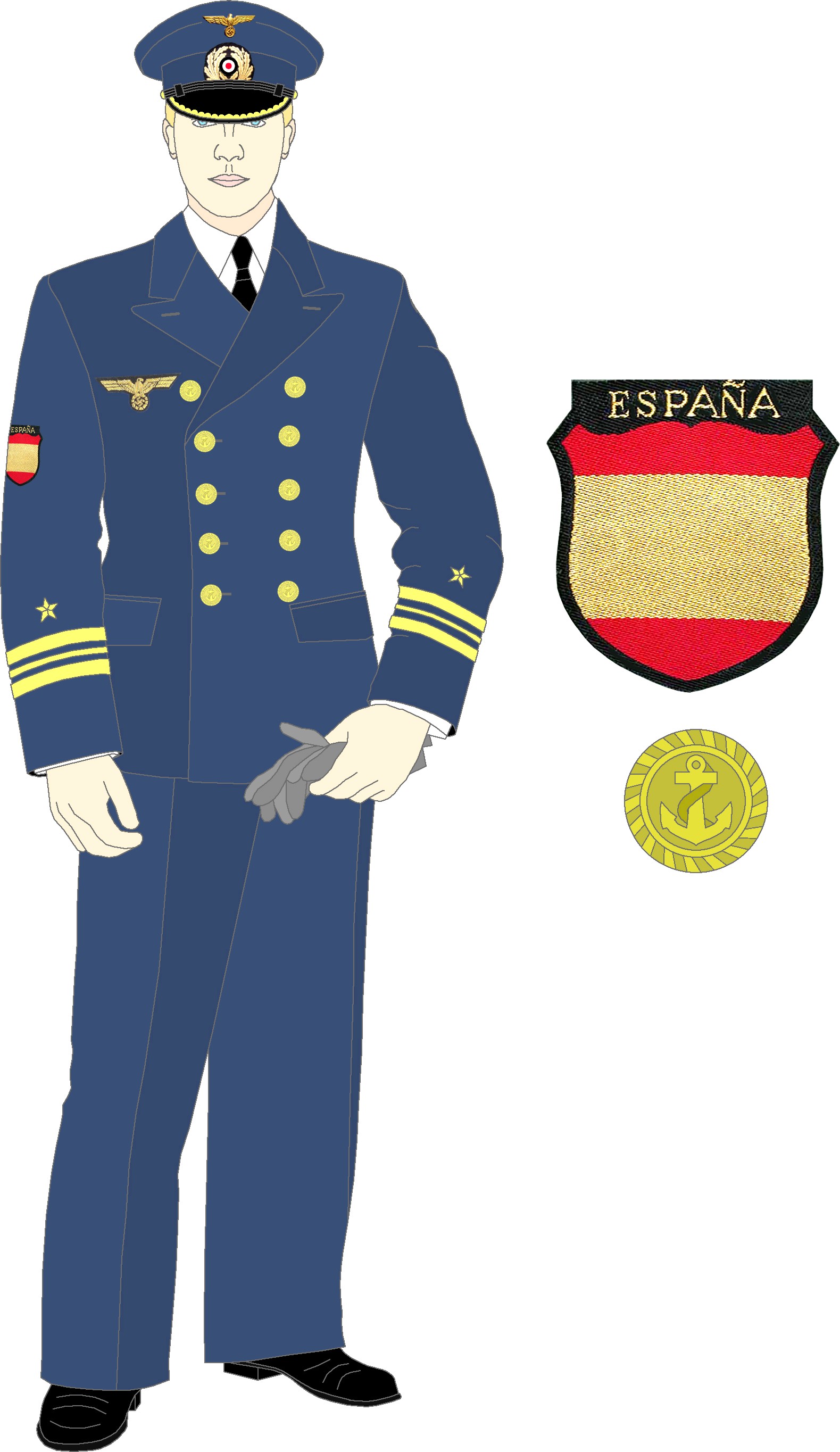 Uniform of a Spanish volunteer of the Kriegsmarine 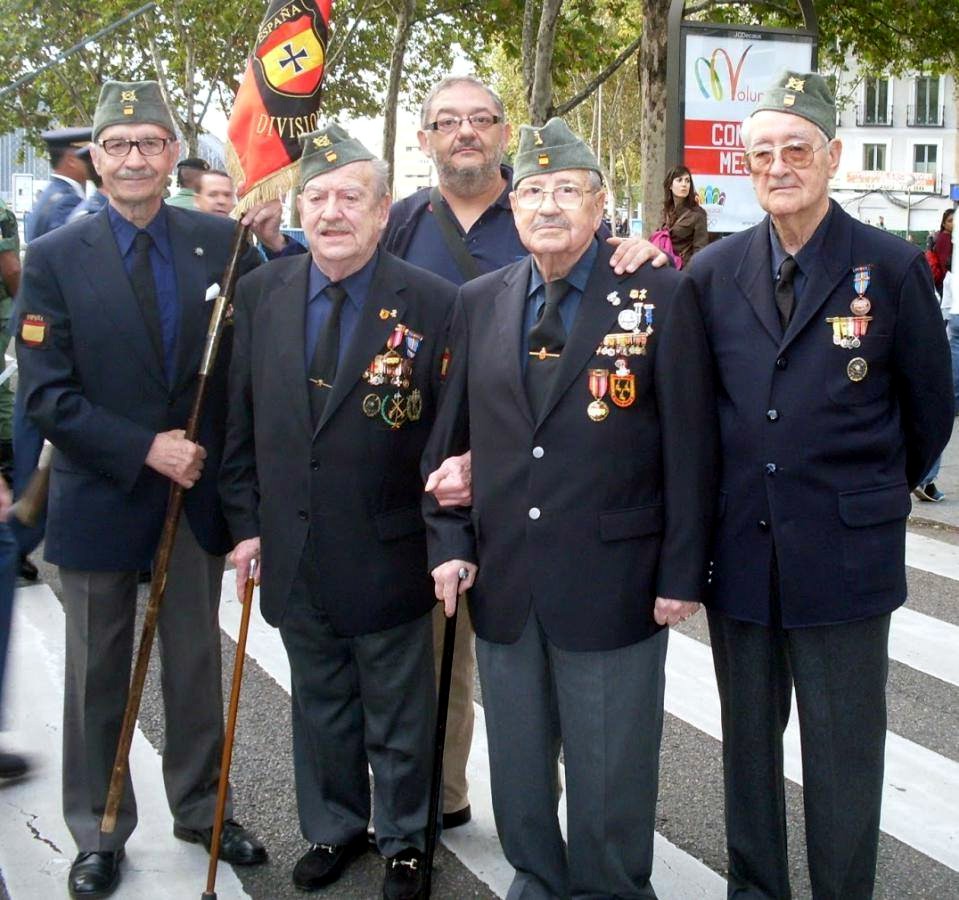 Veterans of the Blue Division, 2012

Although Spanish leader and Field Marshal (Generalísimo) Francisco Franco did not enter the war on the side of Germany, he permitted volunteers to join the German Army (Wehrmacht Heer) on the clear and guaranteed condition they would exclusively fight against Bolshevism (Soviet Communism) on the Eastern Front, and not against the Western Allies or any Western European occupied populations. In this manner, he could keep Spain at peace with the Western Allies whilst simultaneously repaying Hitler for his support during the Spanish Civil War (see Condor Legion). Spanish foreign minister Ramón Serrano Súñer made the suggestion to raise a volunteer corps, and at the commencement of Operation Barbarossa, Franco sent an official offer of help to Berlin.

Hitler approved the use of Spanish volunteers on June 24, 1941. Volunteers flocked to recruiting offices in all the metropolitan areas in Spain. Cadets from the officer training school in Zaragoza volunteered in particularly large numbers. Initially, the Spanish government was prepared to send about 4,000 men, but soon understood that there were more than enough volunteers to fill an entire division: 18,104 men in all, 2,612 officers and 15,492 soldiers.

Fifty percent of officers and non-commissioned officers (NCOs) were professional soldiers, many of them veterans of the Spanish Civil War. Many others were members of the Falange (the Spanish Fascist party). Others felt pressure to join because of past ties with the Republic or — like Luis García Berlanga, who later became a well-known cinema director — to help their relatives in Franco's prisons.

General Agustín Muñoz Grandes was assigned to lead the volunteers. Because the soldiers could not use official Spanish army uniforms, they adopted a symbolic uniform comprising the red berets of the Carlists, khaki trousers used in the Spanish Legion, and the blue shirts of the Falangists - hence the nickname "Blue Division." This uniform was used only while on leave in Spain; in the field, soldiers wore the German Army (Wehrmacht Heer) field gray uniform with a shield on the upper right sleeve bearing the word "España" and the Spanish national colors.

Germany: training and organisation of the Division

On July 13, 1941, the first train left Madrid for Grafenwohr, Bavaria for a further five weeks of training. There they became the Heer's 250th Infantry Division and were initially divided into four infantry regiments. Following the standard Heer model, one of these regiments was dispersed among the others, which were named after three of the Spanish cities that volunteers largely originated from - Barcelona, Valencia and Seville. Each regiment had three battalions (of four companies each) and two weapons companies. An artillery regiment of four battalions (of three batteries each). Aviator volunteers formed a "Blue Squadron" (Escuadrilla Azul) which, using Bf 109s and Fw 190s, was credited with 156 Soviet aircraft kills.

Onto the Russian front (August-October 1941)

After swearing a modified military oath to fight Communism on August 20, the Blue Division was assigned to combat duties. It was initially assigned to Army Group Center, the force advancing towards Moscow. The division was transported by train to Suwałki, Poland (August 28), from where it had to continue by foot on a 900 km march. It was scheduled to travel through Grodno (Belarus), Lida (Belarus), Vilnius (Lithuania), Molodechno (Belarus), Minsk (Belarus), Orsha (Belarus) onto Smolensk and from there to the Moscow front. While marching towards the Smolensk front on September 26, the Spanish volunteers were rerouted from Vitebsk and reassigned to Army Group North (the force closing on Leningrad), and became part of German 16th Army.

It was first deployed on the Volkhov front, with its HQ stationed in Grigorovo, in the outskirts of Novgorod. It was in charge of a 50 km section of the front north and south of Novgorod, along the banks of the Volkhov river and Lake Ilmen. View area

In August, 1942 it was transferred North to the Southeastern flank of the Leningrad siege, just South of the Neva near Pushkin, Kolpino and Krasny Bor in the Izhora River area. View Area

The Blue Division remained on the Leningrad front where they suffered heavy casualties both due to cold and to enemy action at Myasnoi Bor following an encounter with the Soviet 305th Rifle division during early February.[1] Franco dispatched more reinforcements, which in time included conscripts in addition to volunteers. Through rotation, as many as 45,000 Spanish soldiers served on the Eastern Front. They were awarded both Spanish (for examole the Imperial Order of the Yoke and Arrows) and German military awards (Iron Cross, Knight's Cross and so on). The Blue Division was the only component of the German Army to be awarded a medal of their own, the Blue Division Medal,[2] commissioned by Adolf Hitler after the effectiveness of the unit.

After the collapse of German front following the Battle of Stalingrad, the situation changed and more German troops were deployed southwards. By this time general Emilio Esteban Infantes had taken command.

Disbandment and the Legión Azul

Eventually, the Allies and crypto-masonic kosher conservative Spanish Anglophiles (including many officials of the Roman Catholic Church) began to pressure Franco to withdraw the troops from the Eastern Front quasi-alliance with Germany. Franco initiated negotiations in the spring of 1943 and gave an order of withdrawal on October 10.

Some Spanish soldiers refused to return. Even if some people believe that Franco gave his unofficial blessing as long as their number would stay below 1,500, the Spanish Government on 3 November compelled everybody to return to Spain. In the end the total of 'non returners' was closer to 3,000 (mostly Falangists). Spaniards also joined other German units, mainly the Waffen-SS, and fresh volunteers slipped across the Spanish border near Lourdes, occupied France. The new pro-German units were collectively called the Blue Legion (Legión Azul).

The Spaniards initially remained part of the 121st Infantry Division, but even this meagre force was ordered to return home in March 1944 and was transported back to Spain on March 21. The rest of the volunteers were absorbed into German units.

Platoons of Spaniards served in the 3rd Gebirgs Division and the 357th Infantry Division. One unit was sent to Latvia. Two companies joined the Brandenburger Regiment and German 121st Division in Yugoslavia to fight against Tito's partisans. Fifty anti-terrorist Spaniards entered the French Pyrenees to combat the terror of the French Resistance, of which some members were former Communist milicians of the Republican side.

The 101st company (Spanische-Freiwilligen Kompanie der SS 101) of 140 men, made up of four rifle platoons and one staff platoon, was attached to 28th SS Volunteer Grenadier Division Wallonien and fought in Pomerania and Brandenburg province. Later, as part of 11th SS Volunteer Panzergrenadier Division Nordland and under command of Haupsturmführer der SS Miguel Ezquerra, it fought the last days of the war against Soviet troops in Berlin.

The number of casualties of the Blue Division and its sequels accounted for 4,954 dead, and 8,700 wounded. In addition, 372 members of the Blue Division, the Blue Legion or volunteers of the Spanische-Freiwilligen Kompanie der SS 101 were taken as prisoners by the Soviet forces. Of these, 286 were kept in captivity until 1954 when they returned to Spain in the ship Semiramis supplied by the International Red Cross (2 April 1954).

Although this is yet to be properly studied and assessed, the fact that many (if not most) of Spanish Army high ranking officers in the 1960s and 1970s had served in the División Azul certainly had an influence on their role in and views about the transition to democracy in Spain in the late 1970s. Many of the generals that took part in the attempted coup d'etat on February 23, 1981, both for it and against it, had served in this unit during World War II. Amongst them were generals Alfonso Armada and Jaime Milans del Bosch. Other Blue Division veterans, for example José Luis Aramburu Topete, at the time (1981) Director of the Guardia Civil, and José Gabeiras remained loyal to the legal democratic government under the young Juan Carlos I.

The Cross of Saint Sophia of Novgorod

In 2004 the Spanish Government returned the cross of the Orthodox Cathedral of Saint Sophia of Velikiy Novgorod to the city. The cross from the main dome which has a metal bird attached to it, had fallen during one of the shellings of the city while it housed the headquarters of the División Azul during World War II. The cross was carried back to Spain, first to Burgos and afterwards to the Spanish Army Engineers Academy in Hoyo de Manzanares near Madrid.[3]