The Battle for Stalingrad (German: Schlacht um Stalingrad) from 17 July 1942 to 2 February 1943 during World War II, was a successful Soviet defense of the city of Stalingrad, now Volgograd, stated to be the largest and bloodiest battle in the history of warfare, and a major turning point in the war. The surrounded Axis personnel comprised 265,000 Germans, Romanians, Italians, and the Croatians. In addition, the German 6th Army included between 40,000 and 65,000 Hilfswillige (Hiwis), or "volunteer auxiliaries",a term used for personnel recruited amongst Soviet POWs and civilians from areas under occupation.

A less often mentioned aspect is that the Soviet casualties during the battle were far greater than the German and allied casualties. Out of the nearly 91,000 German prisoners of war captured by the Soviet Union at Stalingrad, only about 5,000-6,000 returned to Germany and only after the death of Stalin, long after the end of the war, with the deaths of the prisoners of war being due to causes such as deaths in Stalin's Gulag camp system. 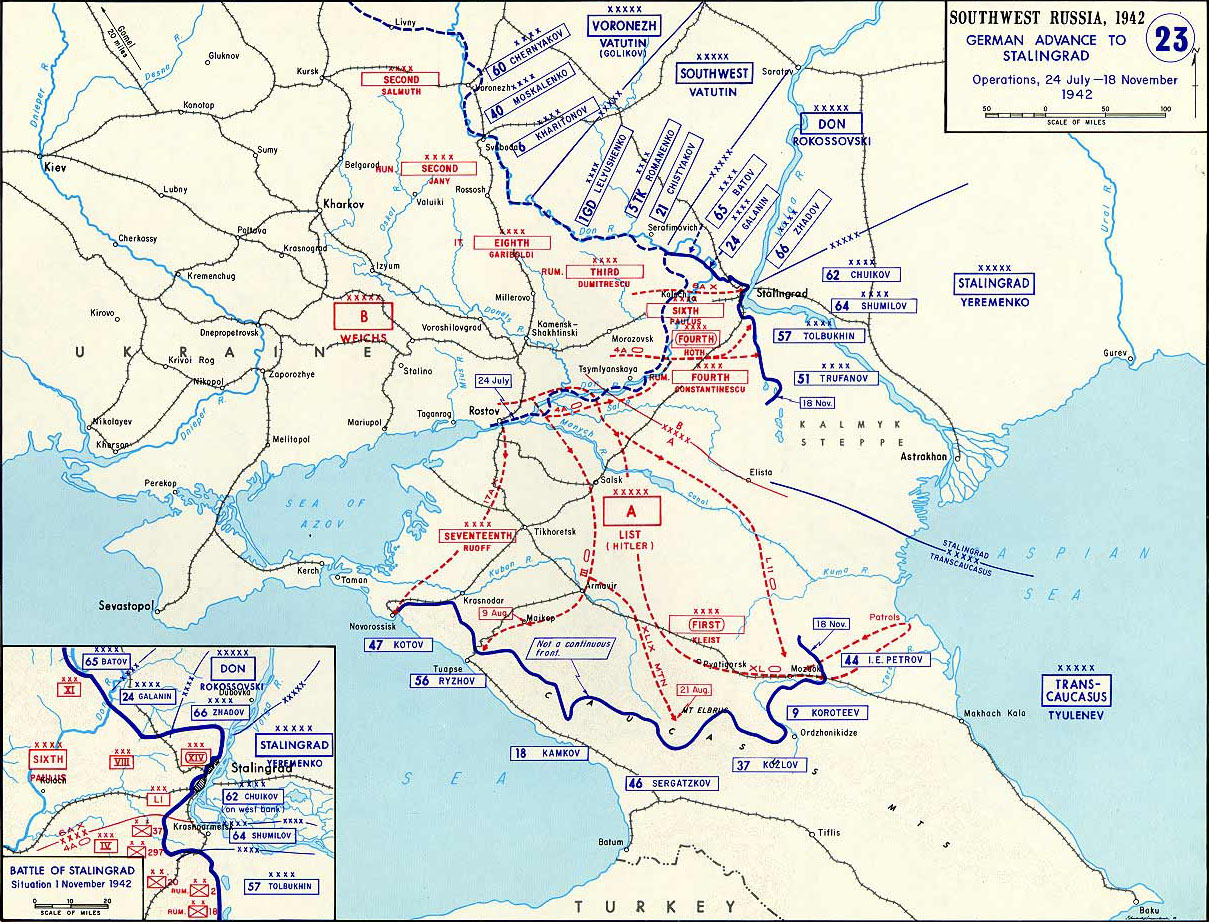 Battle of Stalingrad, (July 17, 1942–February 2, 1943), successful Soviet defense of the city of Stalingrad (now Volgograd), Russia, U.S.S.R., during World War II. Russians consider it to be one of the greatest battles of their Great Patriotic War, and most historians consider it to be the greatest battle of the entire conflict. It stopped the German advance into the Soviet Union and marked the turning of the tide of war in favour of the Allies.

Stretching about 30 miles (50 km) along the banks of the Volga River, Stalingrad was a large industrial city producing armaments and tractors and was an important prize in itself for the invading German army. Capturing the city would cut Soviet transport links with southern Russia, and Stalingrad would then serve to anchor the northern flank of the larger German drive into the oil fields of the Caucasus. In addition, seizing the city that bore the name of Soviet leader Joseph Stalin would serve as a great personal and propaganda victory for Adolf Hitler. German war planners hoped to achieve that end with Fall Blau (“Operation Blue”), a proposal that Hitler assessed and summarized in Führer Directive No. 41 on April 5, 1942. Hitler’s goal was to eliminate Soviet forces in the south, secure the region’s economic resources, and then wheel his armies either north to Moscow or south to conquer the remainder of the Caucasus. The offensive would be undertaken by Army Group South under Field Marshal Fedor von Bock. On June 28, 1942, operations began with significant German victories.

Stalin and the Soviet high command responded to the summer offensive by forming the Stalingrad Front with the Sixty-second, Sixty-third, and Sixty-fourth Armies, under Marshal Semyon Timoshenko. The Eighth Air Army and Twenty-first Army were also placed under his command. While the initial Soviet response to Fall Blau was to maintain an orderly withdrawal and thus avoid the massive encirclements and troop losses that had characterized the early months of Operation Barbarossa, on July 28 Stalin issued Order No. 227, decreeing that the defenders at Stalingrad would take “Not One Step Back.” He also refused the evacuation of any civilians, stating that the army would fight harder knowing that they were defending residents of the city.

For his part, Hitler continued to directly intervene at the operational level, and in August he ordered Hoth to turn around and head toward Stalingrad from the south. By the end of August, the Fourth Army’s northeastward advance against the city was converging with the eastward advance of the Sixth Army, under Gen. Friedrich Paulus, with 330,000 of the German army’s finest troops. The Red Army, however, put up a determined resistance, yielding ground only very slowly and at a high cost to the Sixth Army as it approached Stalingrad.

On August 23 a German spearhead penetrated the city’s northern suburbs, and the Luftwaffe rained incendiary bombs that destroyed most of the city’s wooden housing. The Soviet Sixty-second Army was pushed back into Stalingrad proper, where, under the command of Gen. Vasily I. Chuikov, it made a determined stand. Meanwhile, the Germans’ concentration on Stalingrad was steadily draining reserves from their flank cover, which was already strained by having to stretch so far—400 miles (650 km) on the left (north), as far as Voronezh, and 400 miles again on the right (south), as far as the Terek River. By mid-September the Germans had pushed the Soviet forces in Stalingrad back until the latter occupied only a 9-mile- (15-km-) long strip of the city along the Volga, and that strip was only 2 or 3 miles (3 to 5 km) wide. The Soviets had to supply their troops by barge and boat across the Volga from the other bank. At that point Stalingrad became the scene of some of the fiercest and most-concentrated fighting of the war; streets, blocks, and individual buildings were fought over by many small units of troops and often changed hands again and again. The city’s remaining buildings were pounded into rubble by the unrelenting close combat. The most-critical moment came when on October 14 the Soviet defenders had their backs so close to the Volga that the few remaining supply crossings of the river came under German machine-gun fire. The Germans, however, were growing dispirited by heavy losses, fatigue, and the approach of winter.

The turning point of the battle came with a huge Soviet counteroffensive, code-named Operation Uranus (November 19–23), which had been planned by Generals Georgy Konstantinovich Zhukov, Aleksandr Mikhailovich Vasilevsky, and Nikolay Nikolayevich Voronov. It was launched in two spearheads, some 50 miles (80 km) north and south of the German salient whose tip was at Stalingrad. The counteroffensive utterly surprised the Germans, who thought the Soviets incapable of mounting such an attack. The operation was a “deep penetration” maneuver, attacking not the main German force at the forefront of the battle for Stalingrad—the 250,000 remaining men of the Sixth Army and Fourth Panzer Army, both formidable foes—but instead hitting the weaker flanks. Those flanks were vulnerably exposed on the open steppes surrounding the city and were weakly defended by undermanned, undersupplied, overstretched, and undermotivated Romanian, Hungarian, and Italian troops. The attacks quickly penetrated deep into the flanks, and by November 23 the two prongs of the attack had linked up at Kalach, about 60 miles (100 km) west of Stalingrad; the encirclement of the two German armies in Stalingrad was complete. The German high command urged Hitler to allow Paulus and his forces to break out of the encirclement and rejoin the main German forces west of the city, but Hitler would not contemplate a retreat from the Volga River and ordered Paulus to “stand and fight.” With winter setting in and food and medical supplies dwindling, Paulus’s forces grew weaker. Hitler declared that the Sixth Army would be supplied by the Luftwaffe, but the air convoys could deliver only a fraction of the necessary supplies.

In mid-December Hitler ordered one of the most-talented German commanders, Field Marshal Erich von Manstein, to form a special army corps to rescue Paulus’s forces by fighting its way eastward (Operation Winter Tempest), but Hitler refused to let Paulus fight his way westward at the same time in order to link up with Manstein. That fatal decision doomed Paulus’s forces, since Manstein’s forces then simply lacked the reserves needed to break through the Soviet encirclement single-handedly. The Soviets then resumed the offensive (Operation Saturn, begun on December 16) to shrink the pocket of encircled Germans, to head off any further relief efforts, and to set the stage for the final capitulation of the Germans in Stalingrad. The Volga River was now frozen over solid, and Soviet forces and equipment were sent over the ice at various points within the city. Hitler exhorted the trapped German forces to fight to the death, going so far as to promote Paulus to field marshal (and reminding Paulus that no German officer of that rank had ever surrendered). With Soviet armies closing in as part of Operation Ring (begun January 10, 1943), the situation was hopeless. The Sixth Army was surrounded by seven Soviet armies. On January 31 Paulus disobeyed Hitler and agreed to give himself up. Twenty-two generals surrendered with him, and on February 2 the last of 91,000 frozen starving men (all that was left of the Sixth and Fourth armies) surrendered to the Soviets.

The Soviets recovered 250,000 German and Romanian corpses in and around Stalingrad, and total Axis casualties (Germans, Romanians, Italians, and Hungarians) are believed to have been more than 800,000 dead, wounded, missing, or captured. Of the 91,000 men who surrendered, only some 5,000–6,000 ever returned to their homelands (the last of them a full decade after the end of the war in 1945); the rest died in Soviet prison and labour camps. On the Soviet side, official Russian military historians estimate that there were 1,100,000 Red Army dead, wounded, missing, or captured in the campaign to defend the city. An estimated 40,000 civilians died as well.

Strength at the time of the Soviet counteroffensive

The Axis suffered 747,300 – 868,374 combat casualties (killed, wounded or captured) among all branches of the German armed forces and their allies:

235,000 allied troops in total (nearly 91,000 Germans), from all units, including Manstein's ill-fated relief force, were captured during the battle.[7]

The situation of the Romanian tanks is known, however. Before Operation Uranus, the 1st Romanian Armoured Division consisted of 121 R-2 light tanks and 19 German-produced tanks (Panzer III and IV). All of the 19 German tanks were lost, as well as 81 of the R-2 light tanks. Only 27 of the latter were lost in combat, however, the remaining 54 being abandoned after breaking down or running out of fuel. Ultimately, however, Romanian armoured warfare proved to be a tactical success, as the Romanians destroyed 127 Soviet tanks for the cost of their 100 lost units. Romanian forces destroyed 62 Soviet tanks on 20 November for the cost of 25 tanks of their own, followed by 65 more Soviet tanks on 22 November, for the cost of 10 tanks of their own.[10] More Soviet tanks were destroyed as they overran the Romanian airfields. This was accomplished by Romanian Vickers/Reșița 75 mm anti-aircraft guns, which proved effective against Soviet armour. The battle for the German-Romanian airfield at Karpova lasted two days, with Romanian gunners destroying numerous Soviet tanks. Later, when the Tatsinskaya Airfield was also captured, the Romanian 75 mm guns destroyed five more Soviet tanks.[11]

The losses of transport planes were especially serious, as they destroyed the capacity for supply of the trapped 6th Army. The destruction of 72 aircraft when the airfield at Tatsinskaya Airfield was overrun meant the loss of about 10 percent of the Luftwaffe transport fleet.[15] These losses amounted to about 50 percent of the aircraft committed and the Luftwaffe training program was stopped and sorties in other theatres of war were significantly reduced to save fuel for use at Stalingrad.