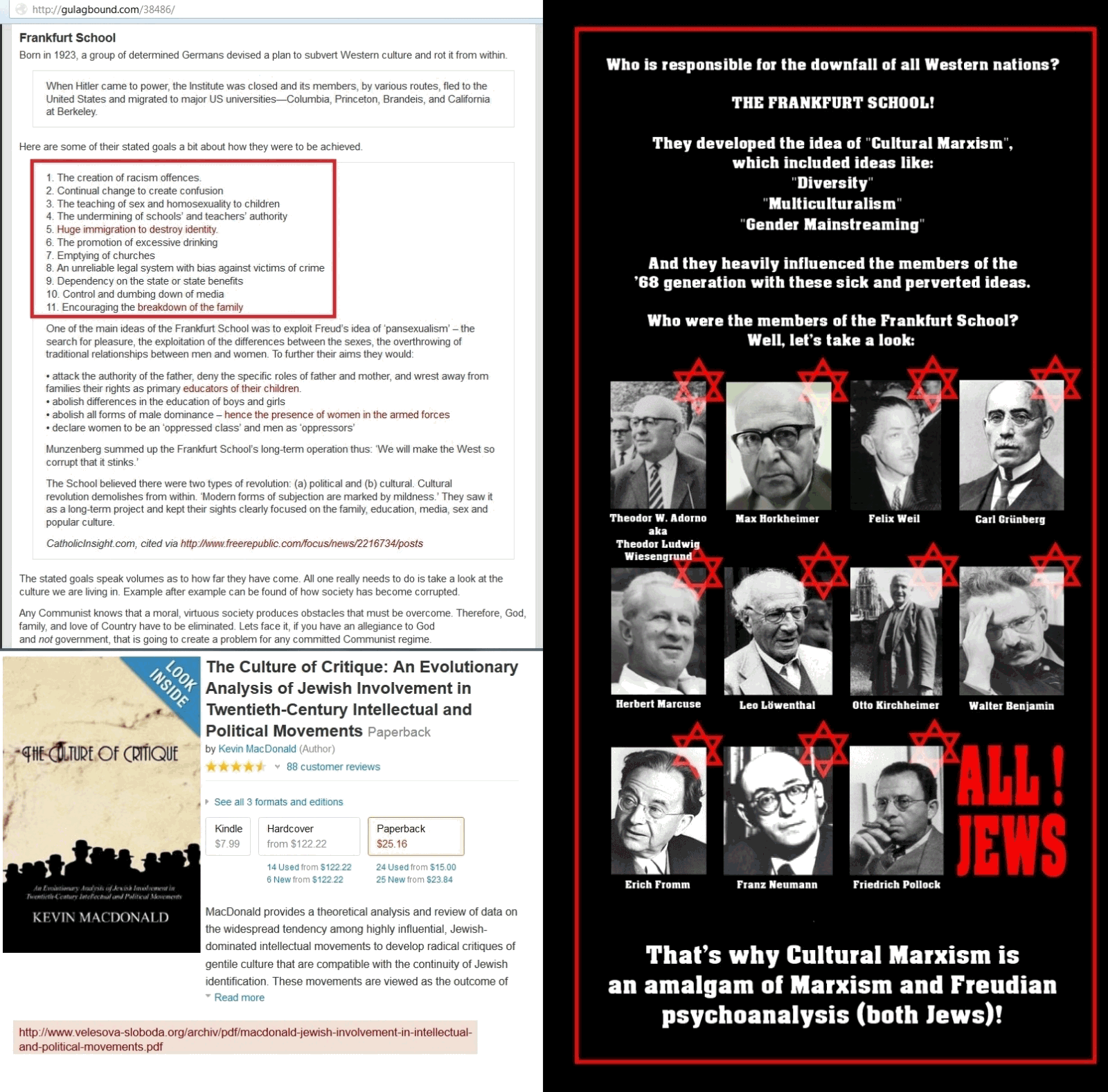 The History of the Frankfurt School and how it went west

Critical theory in the humanities and social sciences is the Marxist interpretation and critique of society and literature, drawing from knowledge across social science and humanities disciplines. The term has two quite different meanings with different origins and histories, one originating in social theory and the other in literary criticism. Though until recently these two meanings had little to do with each other, since the 1970s there has been some overlap between these disciplines. This has led to "critical theory" becoming an umbrella term for an array of theories in English-speaking academia. This article focuses primarily on the differences and similarities between the two senses of the term critical theory. 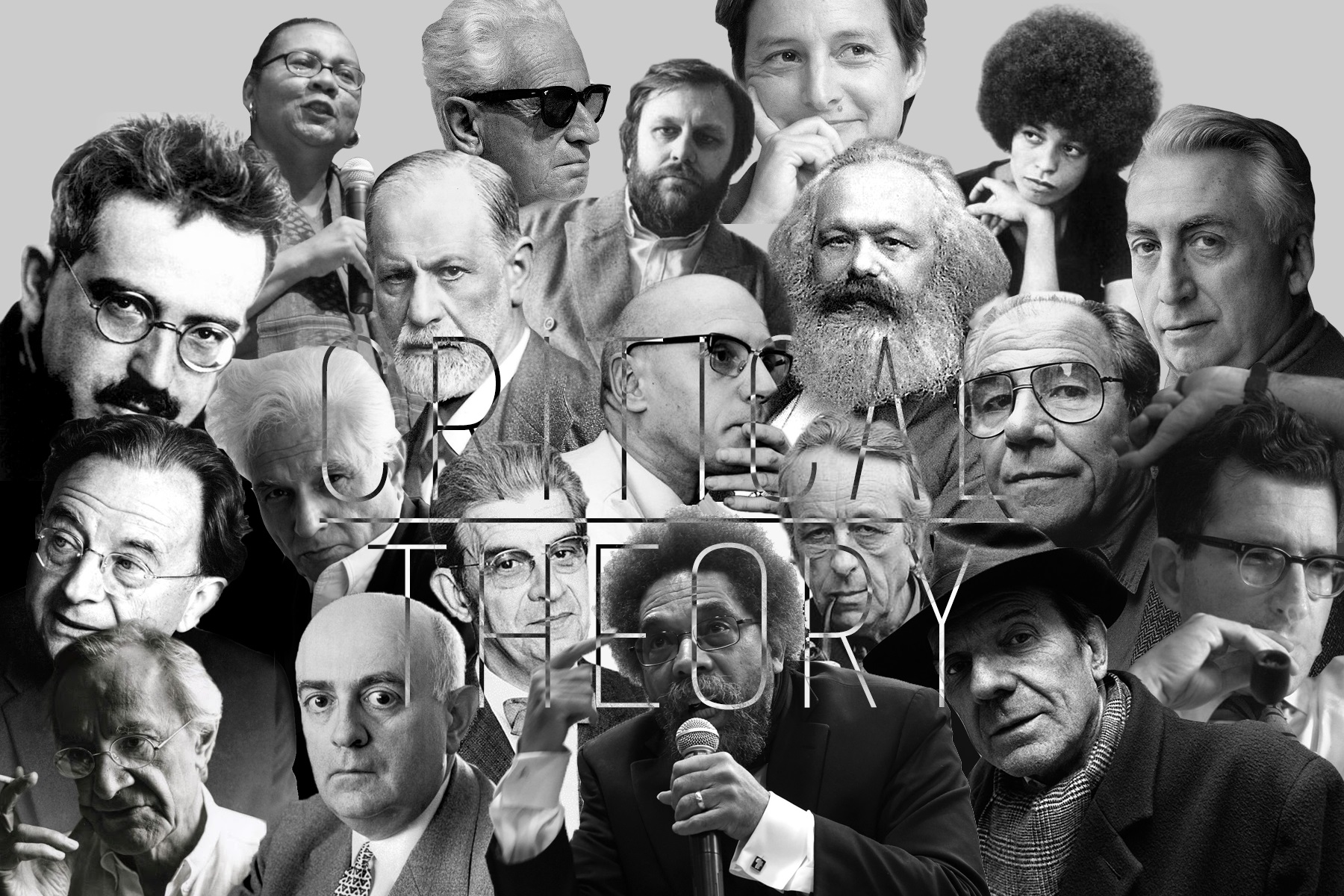 This first paragraph has the virtue of being moderately intelligible. It is also turgid ie swollen; distended; inflated, overblown, or pompous. Society and literature are two different things. Understanding one can help understanding the other. Mixing the two together can lead to muddled thinking. If an article is not understood on the second or third reading consider whether it makes sense at all. Critical Theory And Critical Theorists gives a list of those involved. A large most of them are Marxists. It does not explain critical theory.

The first meaning of the term critical theory was that defined by Max Horkheimer of the Frankfurt School of social science in his 1937 essay Traditional and Critical Theory: Critical theory is social theory oriented toward critiquing and changing society as a whole, in contrast to traditional theory oriented only to understanding or explaining it. Horkheimer wanted to distinguish critical theory as a radical, emancipatory form of Marxian theory, critiquing both the model of science put forward by logical positivism and what he and his colleagues saw as the covert positivism and authoritarianism of orthodox Marxism and communism.

This version of "critical" theory derives from Kant's (18th-Century) and Marx's (19th Century) use of the term "critique", as in Kant's Critique of Pure Reason and Marx's concept that his work Das Kapital (Capital) forms a "critique of political economy". For Kant's transcendental idealism, "critique" means examining and establishing the limits of the validity of a faculty, type, or body of knowledge, especially through accounting for the limitations imposed by the fundamental, irreducible concepts in use in that knowledge system. Early on, Kant's notion associated critique with the disestablishment of false, unprovable, or dogmatic philosophical, social, and political beliefs, because Kant's critique of reason involved the critique of dogmatic theological and metaphysical ideas and was intertwined with the enhancement of ethical autonomy and the Enlightenment critique of superstition and irrational authority. Marx explicitly developed this notion into the critique of ideology and linked it with the practice of social revolution, as in the famous 11th of his "Theses on Feuerbach," "Philosophers have only interpreted the world in certain ways; the point is to change it". [1]

In the 1960's, Jürgen Habermas raised the epistemological discussion to a new level in his Knowledge and Human Interests, by identifying critical knowledge as based on principles that differentiated it either from the natural sciences or the humanities, through its orientation to self-reflection and emancipation.

The term critical theory, in the sociological or philosophical and non-literary sense, now loosely groups all sorts of work, e.g. that of the Frankfurt School, Michel Foucault, Pierre Bourdieu, and feminist theory, that has in common the critique of domination, an emancipatory interest, and the fusion of social/cultural analysis, explanation, and interpretation with social/cultural critique.