From Metapedia
(Redirected from Feminist)
Jump to: navigation, search

Feminism is the opposite of misogyny and is a hatred or contempt for men and a traditional patriarchal society. It operates under the charade of 'equal rights' and rejects femininity. Marx argued that the new enlightened world would not reach fruition until the old had been deconstructed and destroyed. Feminism is also an expression and fellow-traveller of this destruction, although feminism predates Marx. Unsurprisingly vast numbers of feminists are also Marxists or extreme liberals. Feminism is a form of genetics denialism with similarities to race denialism.

The prophet Isaiah (3:12) warned that civilisation would collapse through feminism:

"As for my people, women rule over them; they which lead them to err and will destroy the way of thy paths."

Professor Edward Dutton[1] argues that high levels of female influence in a relatively advanced society is a crucial sign of a civilisation in decline, and that the decline of both ancient Greece and Rome were examples of this. He is supported by American theologian Frank Viola, who wrote that around 44BC a new type of woman emerged in Rome and by the first century they had spread throughout the Roman Empire. They were "liberated married women who pursued their social lives at the expense of their families and who defied previously accepted norms of marriage fidelity and chastity." The ancient world was in overall decline from 350BC to 350AD coinciding with the increasing prominence and status of women. English historian Sir John Glubb (1897-1986) wrote a description of the decline of the Arab empire centred on Baghdad which is particularly fascinating. It's decline began in about 861 AD. Arab historians recorded a decline in sexual morality, and the rise in sexualized popular singing, especially by the 10th century. There was also an "increase in women in public life...with women demanding admission to professions hitherto monopolised by men", Many women practiced law, while others obtained posts as university professors.[2]

In addition, many feminists are childless, often deliberately, but in the Holy Bible barrenness was often regarded as a specific curse of God. (Jeremiah 22:30).

Criticisms against some of the more extreme feminist ideologies and movements include:

Another issue is the large Jewish over-representation among influential and more extreme feminists, such as Andrea Dworkin who described herself as a "radical feminist", and financial backers. Various explanations for this have been suggested. 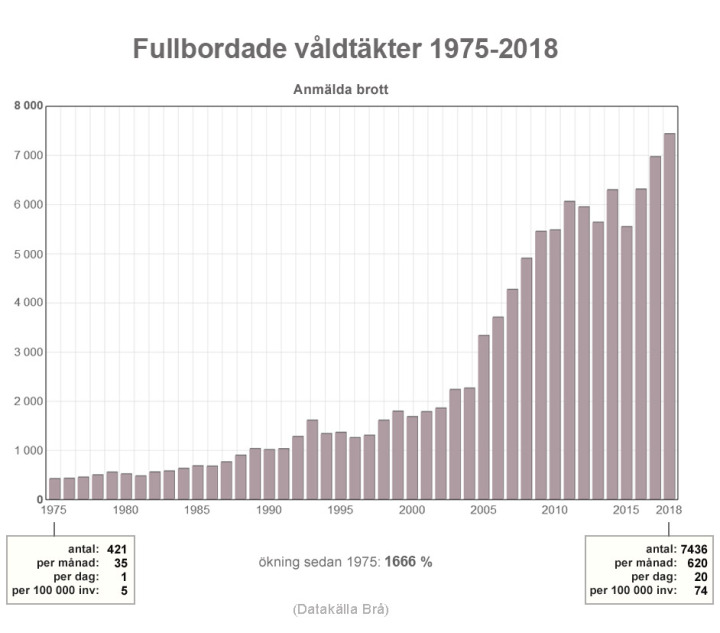 Reported rapes in Sweden between 1975 and 2018, as stated by official crime statistics, showing a +1666% increase. There are no publicly available recent official data on immigrants and rape, but Swedish immigration critics argue that various unofficial data and estimates state that a large majority are committed by non-European immigrants and their children who are sometimes born in that country.[4] Many other reported crimes, including other reported violent crimes, have also increased.[5] See also Race and crime: Sweden.