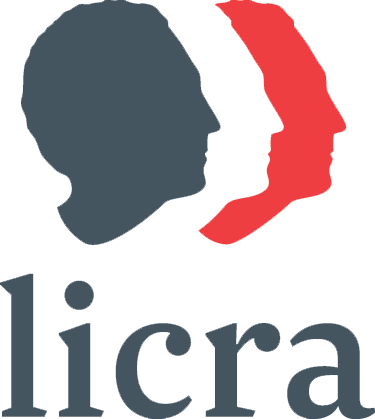 The International League against Racism and Anti-Semitism (French: Ligue Internationale Contre le Racisme et l'Antisémitisme), better known simply as LICRA, is one of the French equivalents of organizations such as the Anti-Defamation League and the Southern Poverty Law Center.

Lobbying by the organization is a major cause of various legal restrictions on free speech in France (such as prohibition of "Holocaust denial") and many other forms of restrictive legislation against claimed anti-Semitism and racism. It is also a media surveillance organization threatening to sue any disliked speech or writing. The organization is also a supporter of the mass immigration to France.

LICRA is not explicitly Jewish, but has been argued to be mainly funded and controlled by Jews and to promote Jewish interests.[1]

The organization was founded in 1927 to defend the Jewish social anarchist Sholom Schwartzbard, who had killed the Ukrainian nationalist leader Symon Petliura, accused of having incited pogroms in Ukraine. This has some similarities with Leo Frank and the founding of the Anti-Defamation League. After Schwartzbard's acquittal, he became a prominent activist in the organization. Various sources have stated that Schwartzbard was a Soviet agent or had associations with Soviet intelligence agencies.

The founder was the Jewish Bernard Lecache, who was a member of the French Communist Party, the Freemasonry organization the Grand Orient de France, and the pro-Dreyfus Ligue des droits de l'homme.

The organizations has had associations with the also "anti-racist" organizatsion MRAP, which in turn is more openly associated with the French Communist Party. One example is that the founder and leader Charles Palant was a youth president of LICA.

Part of this article consists of modified text from Wikipedia, and the article is therefore licensed under GFDL.
Retrieved from "http://en.metapedia.org/m/index.php?title=LICRA&oldid=453244"
Categories: