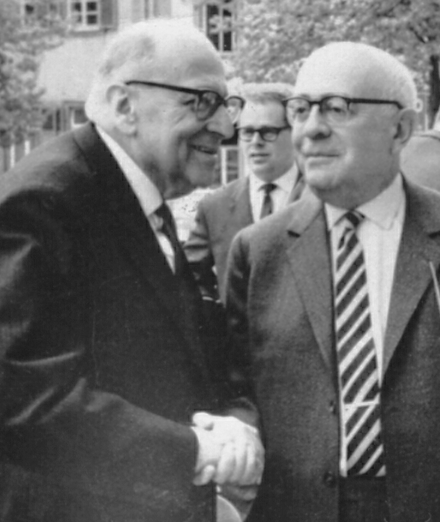 Max Horkheimer (14 February 1895 – 7 July 1973) was a Jewish Marxist sociologist, philosopher and author. Horkheimer was famous for his work in critical theory as a member of the Frankfurt School of social research.

During the time Horkheimer was director of the Institute in 1930, the NSDAP became the second largest party in the Reichstag. In the midst of the National Socialists rise, Horkheimer and his associates began to prepare for the possibility of moving the Institute out of Germany. When Hitler was named the Chancellor in 1933, the institute was thus forced to close its location in Germany.

He emigrated to Geneva, Switzerland and then to New York City the following year. In 1940, Horkheimer received American citizenship and moved to the Pacific Palisades district of Los Angeles, California, where his collaboration with Adorno would yield the book Dialectic of Enlightenment. In 1942, Horkheimer assumed the directorship of the Scientific Division of the American Jewish Committee.

In 1949, he returned to Frankfurt where the Institute for Social Research reopened in 1950.

This article is a stub. You can help Metapedia grow by expanding it.
Retrieved from "http://en.metapedia.org/m/index.php?title=Max_Horkheimer&oldid=474426"
Categories: