From Metapedia
(Redirected from Marx)
Jump to: navigation, search 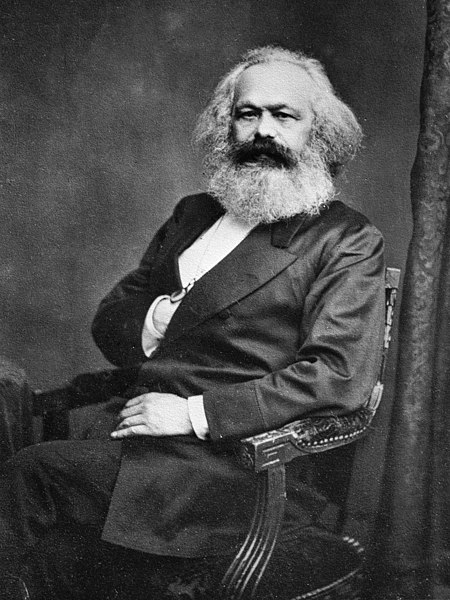 Well-known portrait photo of Marx, in the "hand-in-waistcoat" position, among other associations supposed to signal being of modest/restrained/"genteel" behavior.

Karl Heinrich Marx (b. 5 May 1818 in Trier, Kingdom of Prussia, German Confederation; d. 14 March 1883 in London, England) was the founder of Marxism.

Marx was born into a Jewish family of rabbis in Trier, Prussian Rhineland. The original family surname was Mordechai. Through his mother, Marx was distantly related to the Rothschilds. His father had converted to Protestantism for career reasons. Marx did not receive a traditional Jewish upringing, but instead a liberal one. He studied law, but was more interested in other topics. An early important influence was the Jewish socialist Moses Hess, who later would be one of the founders of Zionism.

Marx eventually started writing in support of socialism and revolutionary activities. He and his family had to move several times in order to avoid the authorities. Together with Friedrich Engels, Marx wrote the Communist Manifesto in 1848. In 1849, he and his family had to move to London. He remained there for the rest of his life and developed his own variant of socialism, Marxism. An important text was Capital: Critique of Political Economy. Marx had an important role in the First International (1864–1876), which was an international umbrella organization for various socialist groups. It eventually split after a conflict with social anarchists, notably the anti-Semitic Mikhail Bakunin.

Marx was a relatively obscure and unknown figure for much of his life. The First International gave him some influence among socialists, especially among extremist revolutionaries inspired by the easily read and extremist Communist Manifesto, but he was relatively unknown to the general public until the October Revolution in Russia in 1917, after which he was used in a massive propaganda personality cult and was given an almost religious status.

Despite being Jewish, Marx said:

“This whole Jewish world which constitutes a single exploiting sect, a sort of bloodsucker people, a collective parasite, voracious, organised in itself, not only across the frontiers of states but even across all the differences of political opinion — this world is presently, at least in great part, at the disposal of Marx on the one hand and of the Rothschilds on the other. I know that the Rothschilds, reactionaries as they are and should be, highly appreciate the merits of the communist Marx; and that in his turn the communist Marx feels irresistibly drawn, by instinctive attraction and respectful admiration, to the financial genius of Rothschild. Jewish solidarity, that powerful solidarity that has maintained itself through all history, united them.[1]

There are extensive criticisms of Marx and Marxism by a wide variety of critics. This section will just briefly overview a few examples. More details can be found in the "External links" section and many other sources critical of Marx and Communism.

Regarding criticisms of Marxism, see the Communism article.

Regarding more personal criticisms, although the distinction between Marx's "personal" views and "official" Marxist views is often difficult, one criticism has been of racist views, such as regarding Russians and Slavs. Henry Hyndman, who spent many hours in Marx's company, in his Record of an Adventurous Life, attributed this anti-Russian obsession to Marx's Jewish ethnocentrism.[2] These anti-Russian views may have contributed to the mass killings of Russians by Communists, who often were from non-Russian ethnic minorities.

Marx has also been criticized for racist views against many other groups, dislike of the working class, disdain for Western civilization, and general contempt for humanity.[3]

Marx, notably in his text On the Jewish Question, portrayed Jews as a clannish group engaged in economic exploitation of gentiles. This would disappear in the future Communist utopian society, although some form of Jewish group identity would continue to exist also there. Some have suggested that Marx viewed his Jewishness as a liability (anti-Semitic views were not uncommon among early socialists, see the anti-Semitism article), and went to elaborate lengths to deny it in order to prevent criticism of his writings. A theme in other anti-Semitic writing (such as in Hitler’s writings) has been to claim that Marx had a specifically Jewish agenda in advocating a world society dominated by Jews in which gentile nationalism, gentile ethnic consciousness, and traditional gentile elites would be eliminated.[4][5] See also the article on Jews and Communism.

Marx's wife hired a housekeeper when she received some money from an inheritance. Marx's final child was born to the housekeeper. Marx initially lied to his wife and claimed that his friend Engels was the father but eventually confessed.

Other examples of criticisms include of laziness and selfishness. The highly educated Marx refused to take an ordinary job, instead preferring to live on handouts from his friend Engels, and in effect preferring that his family should often live in filth and poverty, contributing to four of his children dying before reaching adulthood.