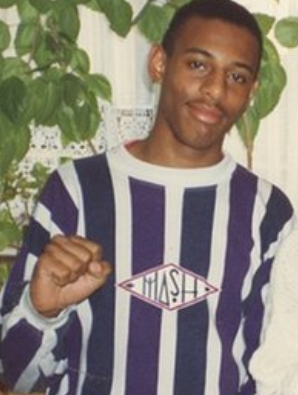 The Stephen Lawrence affair is an artificial political-media saga in the United Kingdom, magnified out of all proportion by the Macpherson Report, which was initiated by the Cultural Marxist fifth column with the intention of discrediting British society; and the police and undermining their function.[1] It has been analysed and widely condemned.[2][3][4][5] The leading panel member during the inquiry into the affair was Richard Stone a Jew from a very wealthy family; as a result of his intentions, the affair can been seen as part of the wider Jewish manipulation of ethnic minority affairs in Britain.

This saga relates to an atmosphere of hysteria following the stabbing of a young Jamaican Black, Stephen Lawrence, allegedly by a gang of indigenous Englishmen at about 2230 hrs on Thursday, April 22, 1993. The only witness was another Black who was with Lawrence, Duwayne Brooks, who, even in the Report, was stereotyped as "a young black man exhibiting unpleasant hostility and agitation" and who "used grossly offensive language when the police arrived at the scene" and damaged one of their cars.[6] It is obvious that here is a very unreliable witness. The fact that "blacks are disproportionately active in street crime in the UK and elsewhere"[7] appears to have been ignored.

In their pursuit of the five suspects in the killing of Stephen Lawrence, normal conventions such as the assumption of innocence and contempt of court were ignored — and it was apparent that the 'suspects' White working class aspect produced an additional frisson of loathing. As the liberal-left media bombardment followed — the acres of newsprint, TV documentaries, the TV dramas, the feature film — one message was unmistakeable; all Caucasian Whites had to share the blame for what happened to Stephen Lawrence. 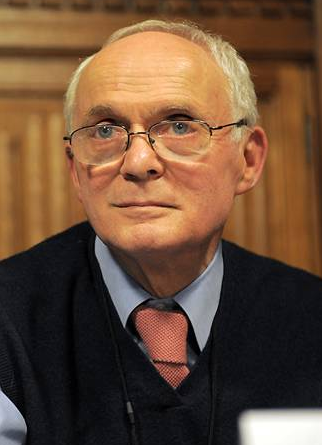 Richard Stone of the Jewish Council for Racial Equality was a leading panel member.

On July 31, 1997, the UK's Marxist Home Secretary, Jack Straw, asked retired High Court Judge Sir William Macpherson of Cluny (b.1926), "to inquire into the matters arising from the death of Stephen Lawrence, in order to identify the lessons to be learned for the investigation and prosecution of racially motivated crimes". Published in February 1999, the Report can rightly be regarded as a landmark in race relations in the UK. The near unanimous acceptance of its assumptions and conclusions by the socialist Labour Government represented a major victory for those who are striving to undermine long-established British institutions and accomplish the final destruction of the United Kingdom, epitomised by Mrs Doreen Lawrence's casual comment "no black person can ever trust the police" plus the fact that McPherson insisted that the police should have accepted Brooks's version of events at face value.[8]

Dr Frank Ellis argues that the inquiry was conducted carelessly and in an atmosphere of hysteria, and that Sir William Macpherson was "naive" to lend his name to this "disgraceful document". Macpherson’s presumption that the murder was racially motivated, his uncritical acceptance of Marxist concepts and terminology, his "intimidation" of experienced police witnesses and his belief that only Caucasians can be racist means that his Report is fatally flawed. His final conclusion - that the Metropolitan Police Force is "institutionally racist" - has exacerbated racial tensions, demoralised the police and opened the way for Far-Left attacks on all institutions. In effect, Dr Ellis says, "The real target of the Macpherson Report is Britain itself". This seemed to be confirmed when the then Bishop of Stepney, Dr. John Sentamu, a black and one of the inquiry team, climbed aboard the left-wing bandwagon and said that people should be prosecuted for using "racist" language in their own homes! In addition the powers of the Commission for Racial Equality, a neo-Soviet government organisation, were to be extended in response to the Stephen Lawrence affair, including the power to bring proceedings against public bodies.[9]

His Honour Judge Patrick Hooton, from Hampshire, attacked the Report, saying that "Sir William Macpherson, an experienced and respected judge, seems to have taken leave of his senses." He said that "this report does a grave injustice to the hundreds of police officers whom it tarnishes without a shred of evidence" and castigated the Lawrence family and their supporters "who expected a clear finding that officers in this investigation acted in a deliberately 'racist' way." Judge Hooton closed by saying "the last thing anyone expected this report - and the political posturing that has followed it - to be was an expiation of White post-colonial guilt: that is what it has become.....this is an utterly misguided document."[10]

Finally in 2011, after an estimated 16 separate inquiries and a failed trial, the House of Commons decided to overturn the centuries-old law of double-jeopardy solely for the purpose of prosecuting the Stephen Lawrence killing suspects. Convictions were duly obtained on two of the five suspects in what was condemned as a show trial.

But there was far too much political capital to be had from the saga to leave it at that and, like a medieval religious play, there are now frequent re-enactments of the martyrdom of Stephen Lawrence in which self-agrandising politicians, loudmouthed race-hustlers, sanctimonious journalists and grandstanding human-rights lawyers — and Doreen Lawrence — all play their appointed parts.

The 2013 summer’s passion play has not disappointed. The Prime Minister, the Deputy Prime Minister, the Home Secretary, the Shadow Home Secretary, the Commissioner of the Metropolitan Police and the chairman of the Commons Home Affairs Committee were all arguing furiously about how best to satisfy Mrs Doreen Lawrence’s demands (supported by the media) for yet another public inquiry. They duly obliged and in July two new reviews were launched into the conduct of the police twenty years previously. 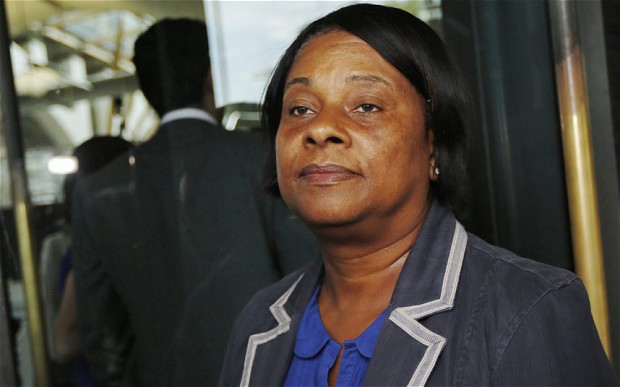 The mother of Stephen Lawrence was permanently and disgracefully critical of all concerned in the investigations and enquiry, making outrageous comments such as the police would not attend to her son's wound because they did not want a black person's blood to touch their hands, and numerous other remarks. She and her husband brought pressure to bear, using the emotional left-wing media, upon the Home Secretary not to reject the Report. Mrs Lawrence went on to become President of a Far-Left group, Unite Against Fascism[11] which, ironically, excels in violent street violence.

Doreen Lawrence is still receiving more accolades and awards to add to the OBE she received in 2003 for her "services to community relations". An obvious joke. The gleaming £10 million Stephen Lawrence Centre was opened in 2008 and is the base for the Stephen Lawrence Charitable Trust, set up by Doreen in 1998. This body, of which Doreen is naturally a director, receives millions poured in by local and national government and corporate sponsors. The Stephen Lawrence Trust has become one of the biggest brands in the charity sector. There is the Memorial Service — attended by the Prime Minister — the Woman of the Year Award, the star-studded concert at London’s largest venue, the O2 Arena — all in the name of Stephen Lawrence. Not to mention the Memorial Lecture which has been given by Prince Charles, the Prince of Wales.

For Doreen, the awards, the accolades, the public appearances and the praise just never seem to stop rolling. Last summer, in front of an international television audience of millions, she was even an Olympic flag bearer, alongside Muhammad Ali and former UN secretary general Ban-Ki Moon. And then she received the "lifetime achievement" award in the UK media’s nationally televised "Pride of Britain Awards" to a standing ovation in November 2012. Her portrait "No Woman No Cry" rendered by one of our most fashionable modern artists, hangs in the Tate Gallery.

For any ambitious young politico on the make a photo-opportunity with Doreen is not to be passed by. There is every possibility thanks to the Stephen Lawrence Legacy black tie gala dinners which have become prime networking events for the great and good.

It is all a monstrous absurdity and blot on Britain.

In 2013 the socialist Labour Party nominated Mrs Lawrence for a Life Peerage. For this she and her nominees were roundly condemned by the Traditional Britain Group through their spokesman Gregory Lauder-Frost, on BBC Newsnight on August 8th and the following day on BBC Radio 5 Live Vanessa Feltz programme, who argued that Mrs Lawrence had absolutely no merits whatsoever to receive a Life Peerage and that it was "a blatant political act and a further debasement of the once noble House of Lords". Instead of being elevated to a peerage, he said, Mrs Lawrence and her ilk should be encouraged to go back to their natural homelands (Mrs Lawrence sent her son Stephen "home" for burial), in keeping with the Conservative Party's 1970 General Election Manifesto pledge which stated that Party would halt immigration and encourage State-assisted voluntary repatriation. In response, so-called Conservative Party MP Jacob Rees-Mogg distanced himself from Lauder-Frost and the Traditional Britain Group, claiming Doreen Lawrence to be almost a saint who had "exposed" the Metropolitan Police, adding that anyone attacking Mrs Lawrence was "not a conservative".[12]

Other cases and agendas

Similar cases where natives have been killed, such as Charlene Downes, Christina Edkins, Danny O'Shea, Kriss Donald and others, do not receive the same repeated front page media coverage, with often little or no coverage at all in real terms, which the Lawrence case has for over 20 years. Similar in many ways to the Trayvon Martin affair in the United States, which occurred a couple of decades after it, the ongoing discourse pertaining to the story has little to do with the case itself, but wider political agendas of select interest groups in society. The main agenda being to demoralise the host population into cosmopolitanism and ethno-masochism by repeating the "institutional racism" canard. It is presented as a one man Holocaust for which all native British are in some way responsible. The Planet of the Apes riots which started in London in 2011 and the ineffectual police response, is a good example of what the campaign to demoralise the police with claims of "institutional racism" was really all about. Similarly the reluctance of the police to investigate Pakistani child grooming gangs, where many native girls have been raped, for fear of being called "racist" is another.