From Metapedia
(Redirected from Cultural Marxist)
Jump to: navigation, search 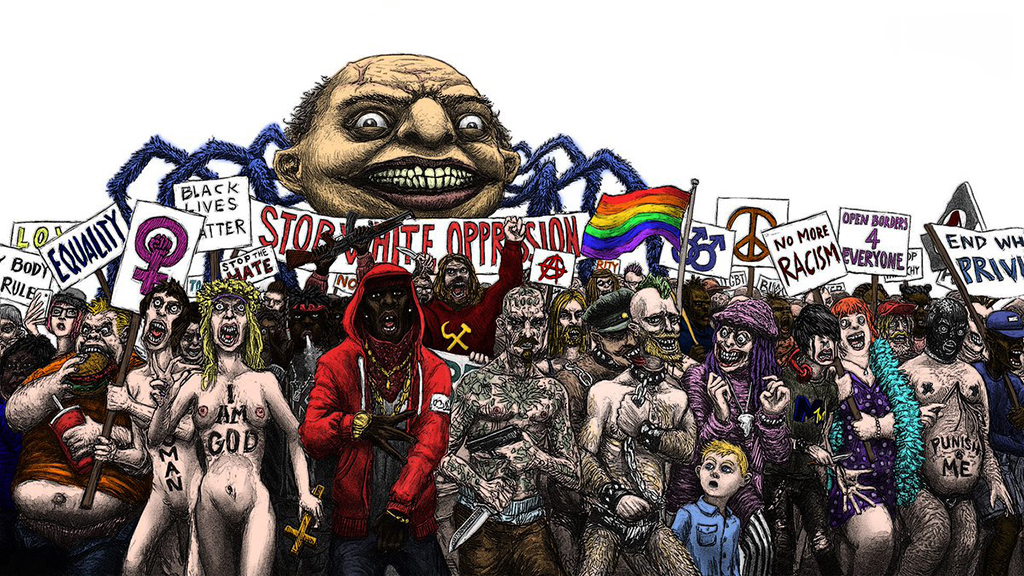 Cultural Marxism is a term used by critics and even self-admitted Marxists are unlikely to use the term to describe their own ideology. Also, Cultural Marxism has its origin in Marxist ideas but those promoting the ideas of Cultural Marxism today may not always know of this or consider themselves to be Marxists.

Instead, promoters of Cultural Marxism may use terms such as critical theory, postmodernism, deconstruction, or similar terms. Many do not know the origin of their own somewhat Cultural Marxist ideas and may, for example, describe themselves as social liberals.

Since culture is considered the primary factor which sustain inequalities, Cultural Marxism is opposed to other explanations for inequalities such as religious explanations, individual choices, or genetic factors.

Unlike Marxism which primarily focuses on economic inequalities and economic classes, Cultural Marxism see culture as a main cause for many different kinds of inequalities:

Cultural Marxism places great emphasis on analyzing, controlling, and changing the popular culture, the popular discourse, the mass media, and the language itself. Seeing culture as often having more or less subconscious influences on people which create and sustain inequalities, Cultural Marxists themselves often try to remove these inequalities by more or less subtle manipulation and censorship of culture.

A term describing such censorship is political correctness where all views on equality that disagree with the Cultural Marxist view are avoided, censored, and punished.

Related to Cultural Marxism are various forms of relativism/subjectivism and denial of the existence of objective knowledge.

The phrase "The long march through the institutions of power" refers to Cultural Marxists slowly taking over key positions in the institutions controlling culture in order to create a new culture. In effect this will create revolutionary changes without having to resort to political violence. It also reflects a worldview where Cultural Marxists view themselves as infiltrators and subversives. (The phrase is often attributed to Antonio Gramsci but was instead coined by another Cultural Marxist (Rudi Dutschke) who was influenced by Gramsci's ideas.)

The Frankfurt School and critical theory

The idea that a culture may be problematic is not new but Cultural Marxism in its current form originates in the Frankfurt School. The Frankfurt School is a neo-Marxist school which originated around 1923 at the Institute for Social Research in Frankfurt, Germany.

Freudian psychoanalysis was an important influence on critical theory. One example is the influential book The Authoritarian Personality where psychoanalytic ideas are used to pathologize Western love and pride of Christianity, the family, and the nation.

The tendency to pathologize opponents as being irrationally sick has continued with, for example, labels such as homophobia and Islamophobia.

The Frankfurt School was an important influence behind the various leftist movements which started in the 1960s.

Many later cultural ideologies such as postmodernism, postcolonialism, deconstruction, and multiculturalism are heavily influenced by critical theory. Kevin MacDonald writes in the Culture of Critique that they adopted principles such as "the fundamental priority of ethics and values in approaching education and the social sciences; empirical science as oppressive and an aspect of social domination; a rejection of the possibility of shared values or any sense of universalism or national culture; a "hermeneutics of suspicion" in which any attempt to construct such universals or a national culture is energetically resisted and "deconstructed"".[1]

See also the article on Relativism.

The various ideologies originating in the Frankfurt school can (like Marxism and psychoanalysis) be considered pseudosciences with theories that cannot be falsified. Often not replying to the factual arguments of critics, the critics are instead often analyzed with the theories and declared to be sick or having hidden motives (ad hominem). They are often similar to sects with adored and charismatic leaders and cleansing of heretics in the own group with less than orthodox views.

Kevin MacDonald argues in the Culture of Critique that critical theories and later ideologies are part of a Jewish group evolutionary strategy. The members of the early Frankfurt School were Jews as were many of the later influential individuals (as well as Marx and Freud). These Jews in their own writings often expressed a strong Jewish identity and concern with Jewish interests. Undermining and dividing a strong group identity among the majority as well as strengthening the position of minorities was seen as important and beneficial for Jewish interests. He furthermore argues for a double standard (sometimes involving self-deception) where the Jewish culture/group in practice is seen as superior and not to be affected by the cultural changes affecting the inferior majority.

Boasian anthropology and other intellectual movements

Boasian anthropology is a pseudo-intellectual movement that appeared in the USA before the Frankfurt School. Kevin MacDonald has argued that it is another Jewish influenced intellectual movement with similar motivations and effects. Roger Pearson is particularly scathing of Boas and his followers and the way they gradually perverted the science of anthropology for political purposes.[2]

MacDonald has also argued that similar developments in sociology and other social sciences where the increasing influence of often Jewish intellectuals is argued to have caused a decline of Darwinism and other biological perspectives. For example, in sociology, the names of Karl Marx, Max Weber, and Émile Durkheim replaced those of Charles Darwin and Herbert Spencer.

In psychology the early biologically/genetically influenced perspective influenced by Charles Darwin and his half-cousin Francis Galton lost influence to movements such as psychoanalysis and behaviorism. Also here political considerations and networking are argued to have been very important.[3]

The Frankfurt School has also been associated with certain forms of modern art.

Leftist sources often dismiss Cultural Marxism not by using factual arguments but instead by labeling it a "conspiracy theory". This can be seen as a form of guilt by association instead of a factual argument. Also, Kevin MacDonald has rejected an overarching conspiracy similar to The Protocols of the Learned Elders of Zion (see the article Jewish group evolutionary strategy).

The Institute for Social Research in Frankfurt was/is no secret conspiracy group but open regarding its intents and had/has many similarities to modern think thanks/"policy institutes" which openly advocate certain ideas/ideologies and try to influence and shape public discourse, culture, and society.