From Metapedia
(Redirected from Leon Degrelle)
Jump to: navigation, search 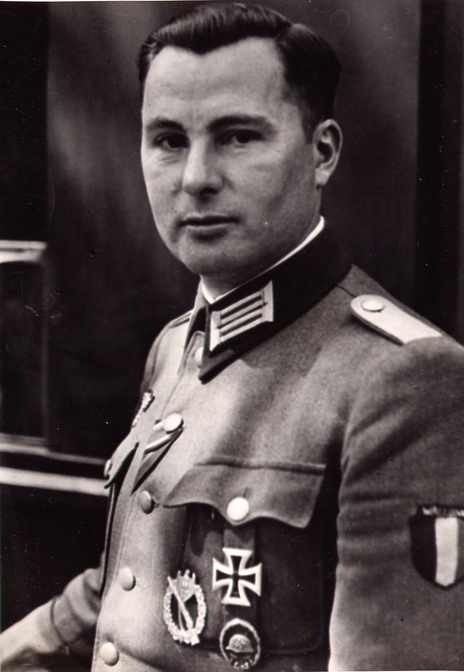 Léon Joseph Marie Ignace Degrelle (15 June 1906 – 31 March 1994) was a Walloon Belgian nationalist, wartime volunteer for the Waffen-SS, and a postwar creator of a major construction company and a writer on topics such as the Waffen-SS, Hitler, and Holocaust revisionism.

After studying at a Jesuit college and studying for a law doctorate at the Université catholique de Louvain, He became attracted to the ideas of Charles Maurras and French Integralism.

Degrelle founded the Rexist Party in 1935, a Catholic and nationalist party, after he left a mainstream Catholic Party that he found too moderate. The name refers to Christ the King ("Rex" in Latin).

The party soon established contacts with and became influenced by fascist (broad sense) movements around Europe.

During this time, Degrelle became acquainted with the cartoonist Hergé. In a volume published after his death, Degrelle leader claimed that his years of journalism had inspired the creation of Tintin, ignoring Hergé's statements that the character was in fact based on his brother.

Degrelle was a volunteer for the Waffen-SS and helped form the 28th SS Volunteer Grenadier Division Wallonien).

"Turning down an invitation to begin as a officer in the newly formed combat unit, he instead chose to start as a private, sharing all the burdens of his comrades. When he left his homeland in August 1941 to begin military service at the age of 35, he had never fired a gun. Nevertheless, he rose through the ranks to become commander of the unit that finally came to be known as the 28th SS Division “Wallonia.”

As a result of the extraordinary courage and leadership he showed on the Narva front in Estonia, he became the first non-German to be awarded the coveted Oak Leaves to the Knight’s Cross of the Iron Cross. Hitler personally bestowed the honor on August 27, 1944.

Of the first 800 Walloon volunteers who left for the Eastern Front, only three survived the war, one of them Degrelle, who was wounded seven times during the course of his three and a half years of combat.[1]

"When Degrelle returned to Brussels after fighting communism for four years on the Eastern Front, he was given the largest mass welcome in Belgian history. Two million Belgians lined the streets of Brussels to cheer the returning general only two months before the Allies invaded that country."[2]

The revisionist Mark Weber has stated that there have been many lies about Degrelle, such as being responsible for deporting Jews from Belgium.[1]

After the surrender of Berlin and death of Hitler, Degrelle moved to the still German-occupied Denmark and eventually Norway, where he commandeered a small aircraft. After a 1,500-mile flight over portions of Allied-occupied Europe to Franco's Spain, he was severely injured in a crash after running out of fuel.

While in hospital, he began writing Campaign in Russia.[2]

"The Allies threatened to invade Spain unless Degrelle and wartime French premier Pierre Laval were not immediately turned over for execution. Franco compromised. He turned over Laval but kept Degrelle on the grounds that he could not be physically removed from the hospital. A year later Degrelle was given refuge in a monastery. Members of his family and many friends and supporters were arrested and tortured to death by the "democratic liberators" of Belgium. His six children were forcibly shipped to detention centers in different parts of Europe after their names were changed. The authorities ordered that they were never to be permitted contact with one another or with their father. The new Belgian government condemned him to death in absentia on three separate occasions. A special law was passed, the Lex Degrellana, which made it illegal to transfer, possess, or receive any book by or about Degrelle."[2]

Degrelle started working as a manual laborer in construction, eventually creating a major construction company with important contracts, even building military airfields for the United States in Spain. "Meanwhile his emissaries searched Europe for his kidnapped children. All were found in the most amazing circumstances and returned to their father."[2]

He did not hide himself, maintained a high standard of living, and would frequently appear in public and in private meetings in a uniform featuring his German decorations, while expressing his pride over his earlier career. He continued to live undisturbed when Spain became democratic after the death of Franco.

He continued publishing and voicing his support for nationalism and Holocaust revisionism. He became active in the Spanish National Socialist group Círculo Español de Amigos de Europa (CEDADE), and led its printing press in Barcelona, where he published a large portion of his own writings.

Less politically correct topics in his writings included Hitler and the Waffen-SS, notably based on his own experiences. He published forty books and essays ranging from poetry to economics, from architecture to history.

Part of this article consists of modified text from Wikipedia, and the article is therefore licensed under GFDL.
Retrieved from "http://en.metapedia.org/m/index.php?title=Léon_Degrelle&oldid=447093"
Categories: