From Metapedia
(Redirected from Franco)
Jump to: navigation, search

Francisco Franco Bahamonde (b. 4 December 1892 in Ferrol, Galicia; d. 20 November 1975 in Madrid) was a military general, and head of state of Spain from 1939 until his death in November 1975. As head of state, Franco used the title El Caudillo. During his almost forty year reign, Franco’s governance went through various different phases, although the most common ideological features present throughout included a strong sense of Spanish nationalism and protection of the country’s territorial integrity, Catholicism, anti-communism, anti-masonry and traditional values.

From a military family, originally intent on entering the Spanish Navy, Franco instead became a soldier. He participated in the Rif War in Morocco, becoming the youngest general in Europe by 1926.[1] After returning to the Spanish mainland, he saw service supressing an anarchist-led strike in 1934; defending the stability of Alcalá-Zamora’s conservative government. Following the formation of a Popular Front government, made up of Marxist, liberal republican and anarchist factions, instability heightened. Incidents of anti-clerical and anti-Catholic violence by subversive philobolshevik militants occurred[2] and also the assasination of José Calvo Sotelo, political leader of Acción Española.[3]

After winning the Spanish Civil War with military aid from Italy and Germany—while the Soviet Union were behind the reds—he dissolved the republican Parliament. He then established a national conservative government that lasted until 1978, when a new constitution was drafted. During the Second World War, Franco officially maintained a policy of non-belligerency and later of neutrality. However, the Blue Division volunteered on the Eastern Front.

After the war, Franco continued an authoritarian regime until his death in 1975. He was a reliable ally for the West during the Cold War. Franco restored the monarchy before his death, which made King Juan Carlos I his successor, who led the Spanish transition to democracy. After a referendum, a new constitution was adopted, which transformed Spain into a parliamentary democracy under a constitutional monarchy. Franco served as a role model for several anti-communist regimes in South America. Augusto Pinochet is known to have admired Franco. 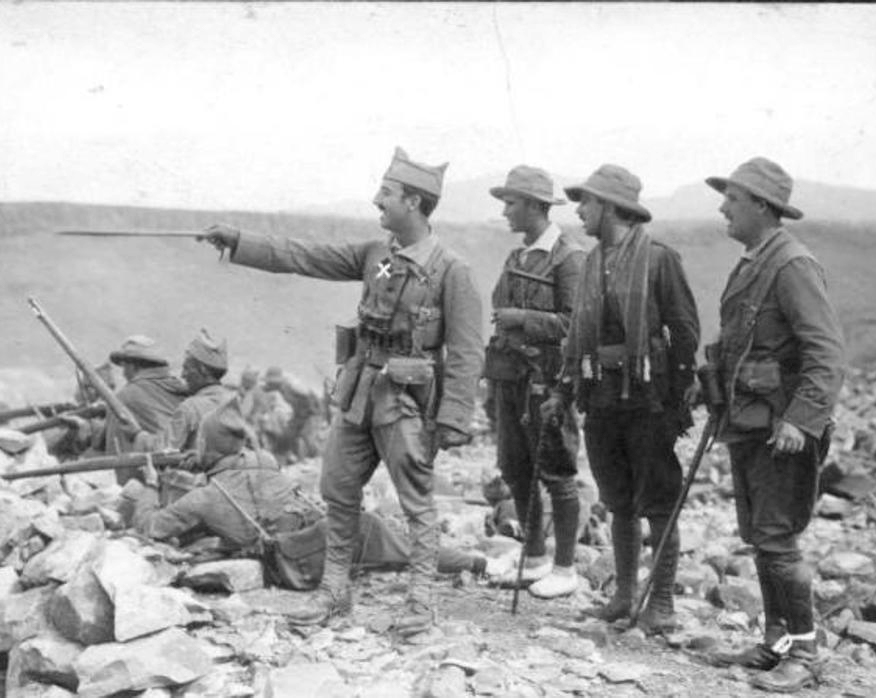 Franco, November 1921, serving with the 1st Bandera in the Rif War of the Spanish Protectorate of Morocco. 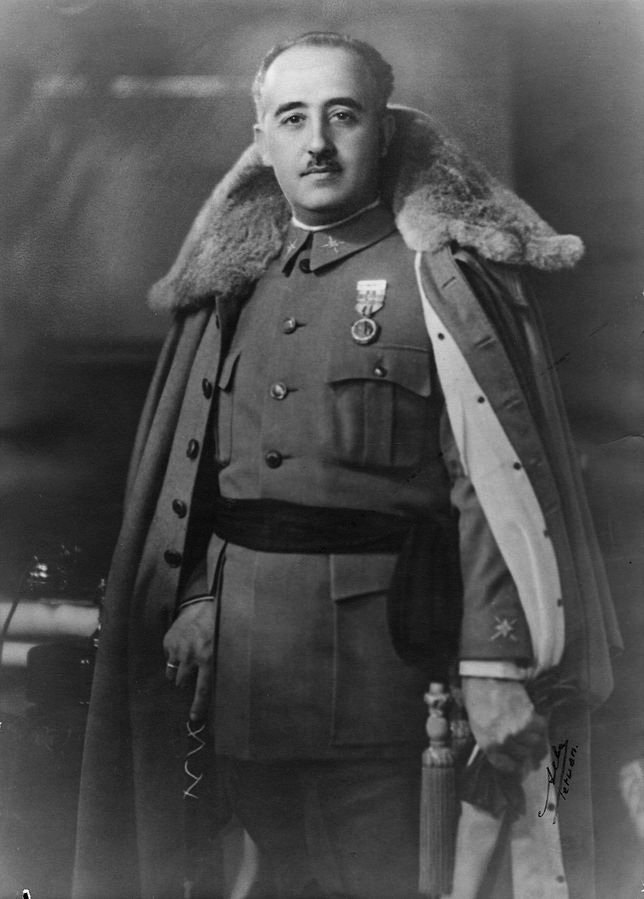 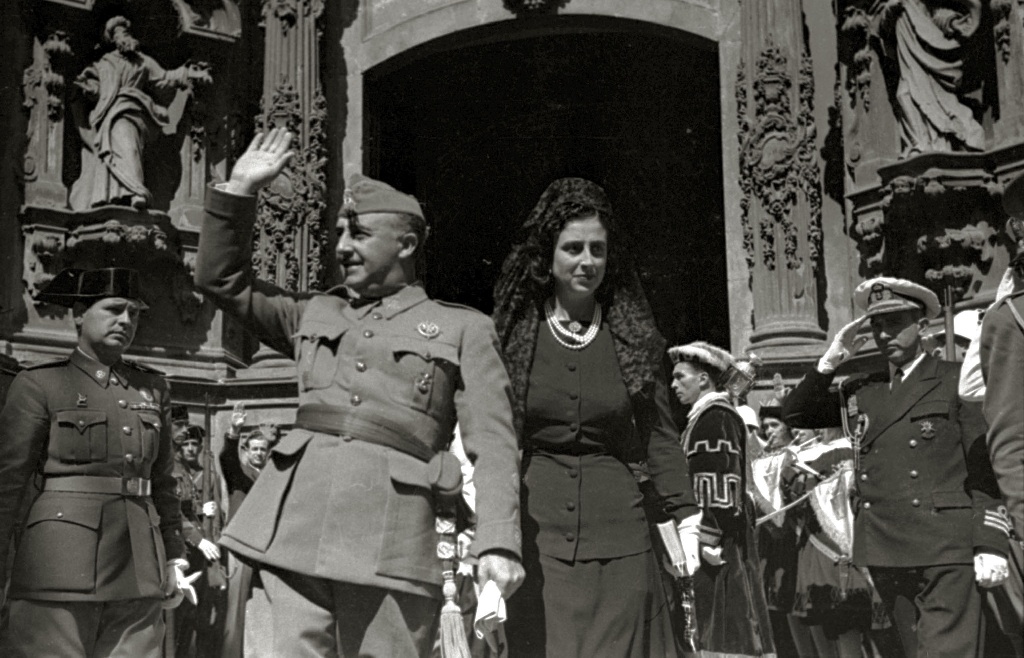 Franco and his wife Carmen Polo in San Sebastián in 1941 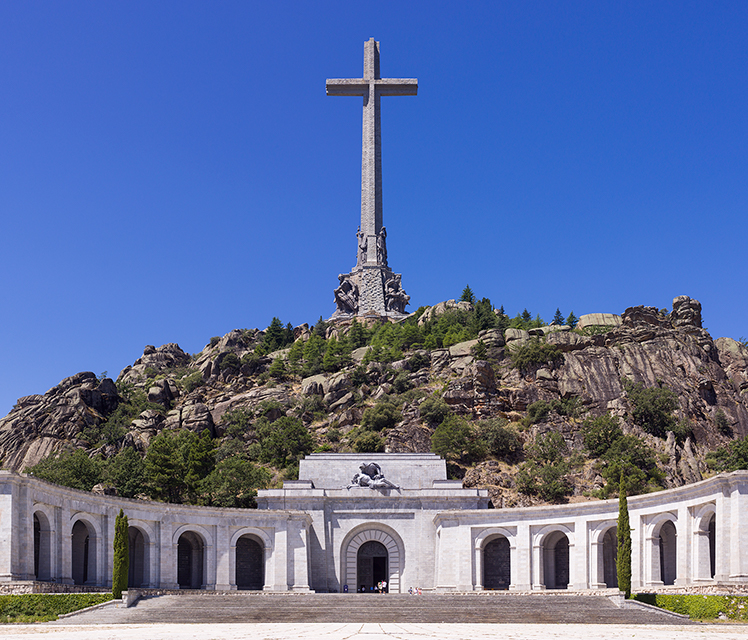 In 2019, Franco's body was removed from the monument of Santa Cruz del Valle de los Caídos, where it had lain since his funeral in 1975.

Francisco Franco Bahamonde was born on 4 December 1892, in the Calle Frutos Saavedra in El Ferrol, Galicia, a coastal-town and Spain's chief naval base in the north.[4] He was baptised thirteen days later at the military church of San Francisco, with the baptismal name Francisco Paulino Hermenegildo Teódulo Franco y Bahamonde Salgado Pardo.

His father, Nicolás Franco y Salgado de Araújo (1855—1942), was an officer in the Spanish Navy; his ancestors were originally from Andalucia and over two centuries had produced naval officers for six generations uninterrupted.[4] His mother, María del Pilar Bahamonde y Pardo de Andrade (1865—1934), married in 1890, was a local Galician who worked as a school teacher. Descended from the aristocratic Andrade family and through Fernando Rodriguez de Castro, 7th Count of Lemos (1505—1579), several medieval European monarchs.

His parents had starkly contrasting outlooks on life.[4] Nicolás was an agnostic, philosophically open to classical liberalism and in the navy was known to drink and gamble. Though he was still a disciplinarian regarding the children.[5] Unbeknownst to the family (until 1950), he fathered an illegitimate child while in the Philippines.[5] María, Franco's mother, was a decade younger than her husband, she was a strongly pious and stoic Catholic woman and a self-sacrificing wife and mother.[5] Paco, as Franco was nicknamed as a child, felt somewhat of an antipathy towards his father’s behaviour and strongly identified with the traditional values of his mother, though is said to have lacked her gentlesness.[5] His father abandoned the family and set up with a servant girl in 1912 as he was reassigned to Madrid.[5]

Franco was the second oldest child and had two brothers and two sisters—Nicolás, Pilar, Ramón and Paz. His brothers shared a competative zeal to be successful, driven on perhaps by their family military background.[6] The three boys would all have careers in the military; Franco's elder brother Nicolás was the only one able to carry on the navy tradition however.[6] In 1923 Franco married Carmen Polo y Martínez Valdés, a member of the Asturian nobility.[7] They kept a stable, conservative and Catholic household and had one child, a daughter named Carmen Franco y Polo (born 1926), later to be known as Duchess of Franco.

Unable to join the navy after cut-backs, Franco was sent as a cadet to the Military Academy of Infantry in Toledo in 1907 and graduated three years later at the age of 17 as a second lieutenant.[6] Though his initial performance was not that distinguished he was known for his determination and hard-work,[6] picking up the nickname Franquito due to being the shortest graduate at just five-feet-four inches.[6] Assigned to combat service in the Spanish Protectorate of Morocco, Franco impressed on his first tour of duty in 1912—1916, mostly in the Regulares. Despite his young age, Franco was promoted to Captain in February 1914 after showing courage, discipline and ordered determination.[8]

While many of his comrades were instead carousing with playing cards, wine and women, Franco applied himself more seriously to his work, particularly the tasks of maps, fortifications and technique preparation for the armed columns.[8] When Spanish officers were seriously injured in combat, they were often granted promotion. He was recommended for promotion to major and to receive Spain's highest honour for gallantry, the coveted Cruz Laureada de San Fernando. Both proposals were denied, with the 23-year-old Franco's young age being given as the reason for denial. Franco appealed the decision to the king, who reversed it. Franco also received the Cross of Maria Cristina, First Class. From 1917 to 1920, he was posted on the Spanish mainland as an infantry batallion commander at the Oviedo garrison in Asturias. He rose through the ranks to become a brigadier general in 1926 at age 33, which made him the youngest general in all of Europe.

After the year 1936 when Spain got a government with a mixture of socialists, communists, anarchists and liberal republicans, the country began to approach a time of unrest where violence between different political groups arose more and more. Communists in the country carried out actions against the Catholic Church, where, among other things, they murdered a number of priests and nuns. The fascist political activist José Antonio Primo de Rivera was also murdered by these forces. The military sensed that a communist dictatorship was beginning to gain power, which led to Franco and other military members taking part in a coup against the Spanish left-wing government. The coup failed and the Spanish Civil War began. Franco was able to bring together into a unified national front the divergent strands of Spanish patriotism, opposed to the Red Terror. The most common tenants that these movements shared was patriotism, traditional values, Catholicism, opposition to both liberalism (including freemasonry) and communism.

After the civil war, with Franco in power, the party Falange Española Tradicionalista y de las Juntas de Ofensiva Nacional-Sindicalista was the only one allowed in the country. The Francoist regime valued traditional values such as Catholicism and nationalism. Homosexuality, along with pedophilia and prostitution, was seen as perverted and was banned and fought hard.

Contrary to many of the autocratic governments of the 20th century, Franco was not the founder of an elaborate or specific political theory. Instead, his disposition mostly derived from that of a pragmatic national conservative military man, known in Spanish tradition as the El Caudillo. He respected Miguel Primo de Rivera, 2nd Marquis of Estella, who had ruled as Prime Minister of Spain from 1923 to 1930 under Alfonso XIII of Spain and some consider his reign simply the institutionalisation of this.

Franco lauded the traditionalism and piety of Carlism, while not upholding their concept of regionalism ("fueros"), nor their doctrinate support of a particular monarchial line. Franco was arguably closest to the Acción Española tendancy and his early military career connected him to the Alfonsist camp. When he had the most independence to act as he wished, Franco ran the country along neo-monarchial lines with himself as the Regent (regarding Juan de Bourbon as too "tainted"[9] by freemasonry).

In March 1940 the Law for the Repression of Freemasonry and Communism was enacted. To be a communist or a member of a masonic lodge became a felony.[10]

During the Second World War, Spain was neutral but did send volunteer troops to help the Axis powers in the east against the Soviet Union, known as the Division Azul. In 1953, during the Cold War, Spain and the United States signed the Pact of Madrid, and Franco's Spain was recognized as an important anti-communist ally.

One of Spain's biggest sources of income was the so-called charter tourism during the 1950s and 1960s, which gave a good turn for the Spanish economy.

On July 19, 1974, Franco fell ill due to various health problems with age and Juan Carlos took over as head of state. Franco recovered on 2 September and resumed his duties as the nation's leader but a year later he relapsed into illness. On 30 October he fell into a coma and received life-sustaining treatment. Franco died shortly after midnight on 20 November 1975, he was then 82 years old, just two weeks from his 83rd birthday. He was buried in the Valle de los Caídos, a gigantic monument to fallen Falangists and nationalists.

We have torn up Marxist materialism and we have disorientated Masonry. We have thwarted the Satanic machinations of the clandestine Masonic superstate. Despite its control of the world’s press and numerous international politicians. Spain’s struggle is a Crusade; as soldiers of God we carry with us the evangelism of the world!
—Francisco Franco, to the Women's Section of the Falange in Madrid, 1945 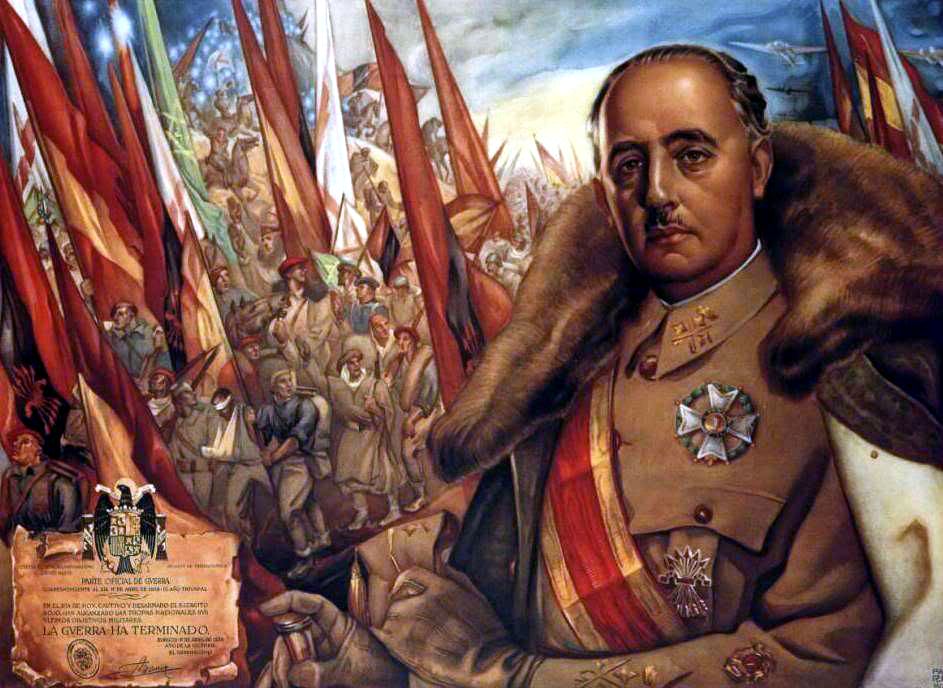 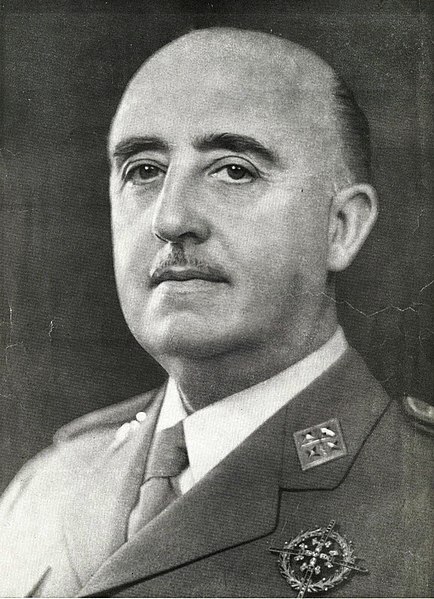