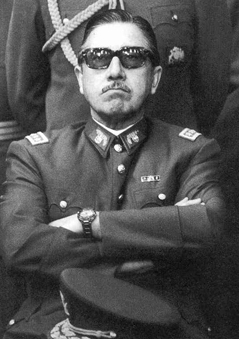 Augusto José Ramón Pinochet Ugarte (25 November 1915 – 10 December 2006) was a Chilean military officer and politician who was the ruler of Chile after the military coup against the Communist Salvador Allende in 1973 and until 1990. After stepping down in 1990, Pinochet continued to serve as Commander-in-Chief of the Chilean Army until 10 March 1998, when he retired and became a senator-for-life in accordance with his 1980 constitution.

Pinochet was arrested under an international arrest warrant during a 1998 visit to London, in connection with numerous claimed human rights violations. Following a legal battle, he was released on grounds of ill-health and returned to Chile in 2000. In 2004, a Chilean Judge ruled that Pinochet was medically fit to stand trial and placed him under house arrest.

Part of this article consists of modified text from Wikipedia, and the article is therefore licensed under GFDL.
Retrieved from "http://en.metapedia.org/m/index.php?title=Augusto_Pinochet&oldid=455591"
Categories: