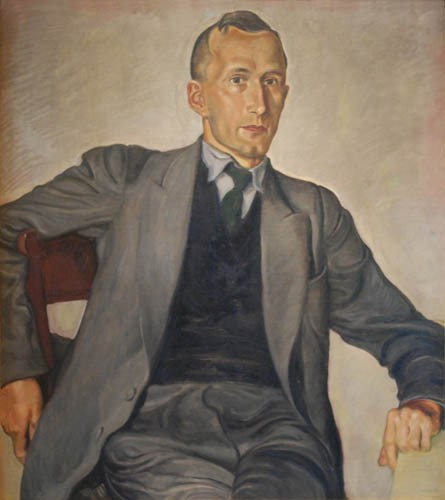 Dr. phil. h. c. mult.[1] Ernst Jünger's later writings have been described as very different from his early ones, in part due to the changing circumstances for Germany and Jünger himself, sometimes seen as in effect expressing (expedient) apolitical individualism. In 1984, he spoke at the Verdun memorial, where he called the "ideology of war" before and after World War I "a calamitous mistake". From 1950 (upon invitation through Friedrich von Stauffenberg) until 1998 he lived in Wilflingen.

Ernst Jünger (b. 29 March 1895 in Heidelberg, Grand Duchy of Baden; d. 17 February 1998 in Riedlingen, Baden-Württemberg) was a German officer, philosopher, writer and intellectual. In addition to his novels and diaries, he is well known for "Storm of Steel" (In Stahlgewitter), an account of his experience during World War I. 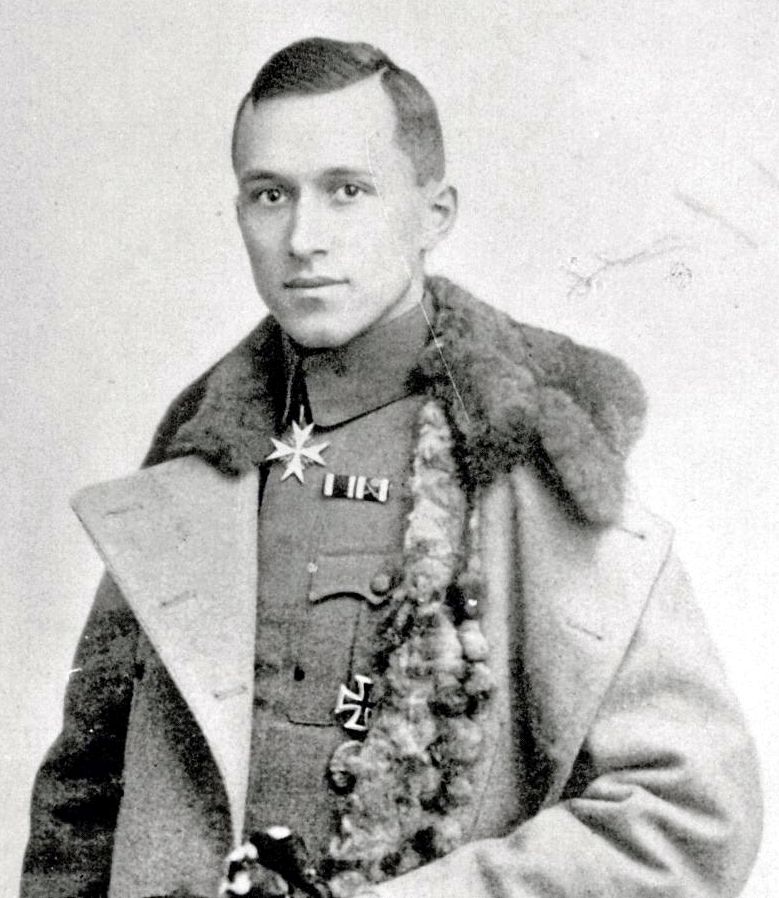 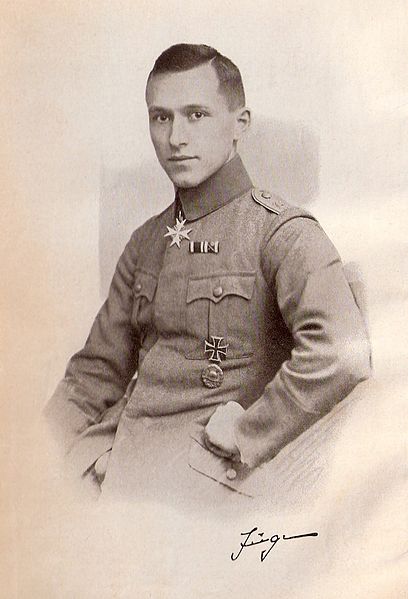 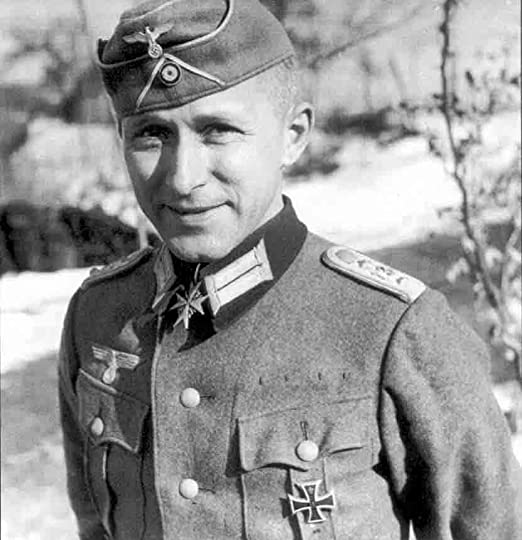 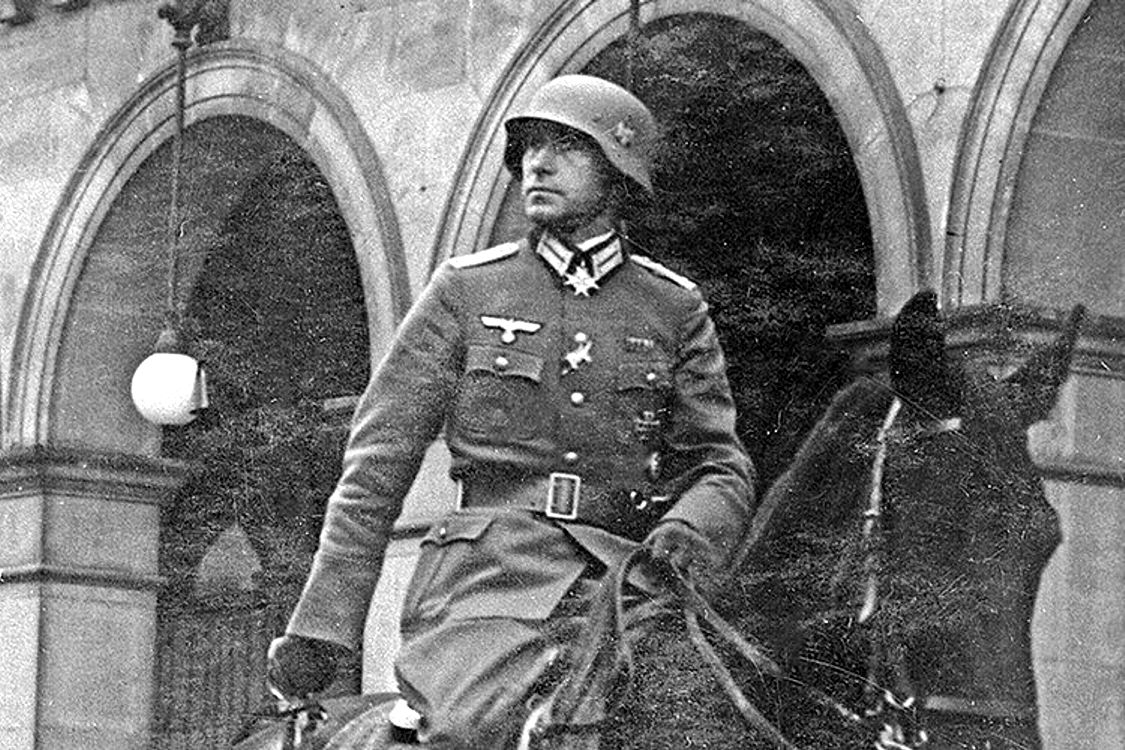 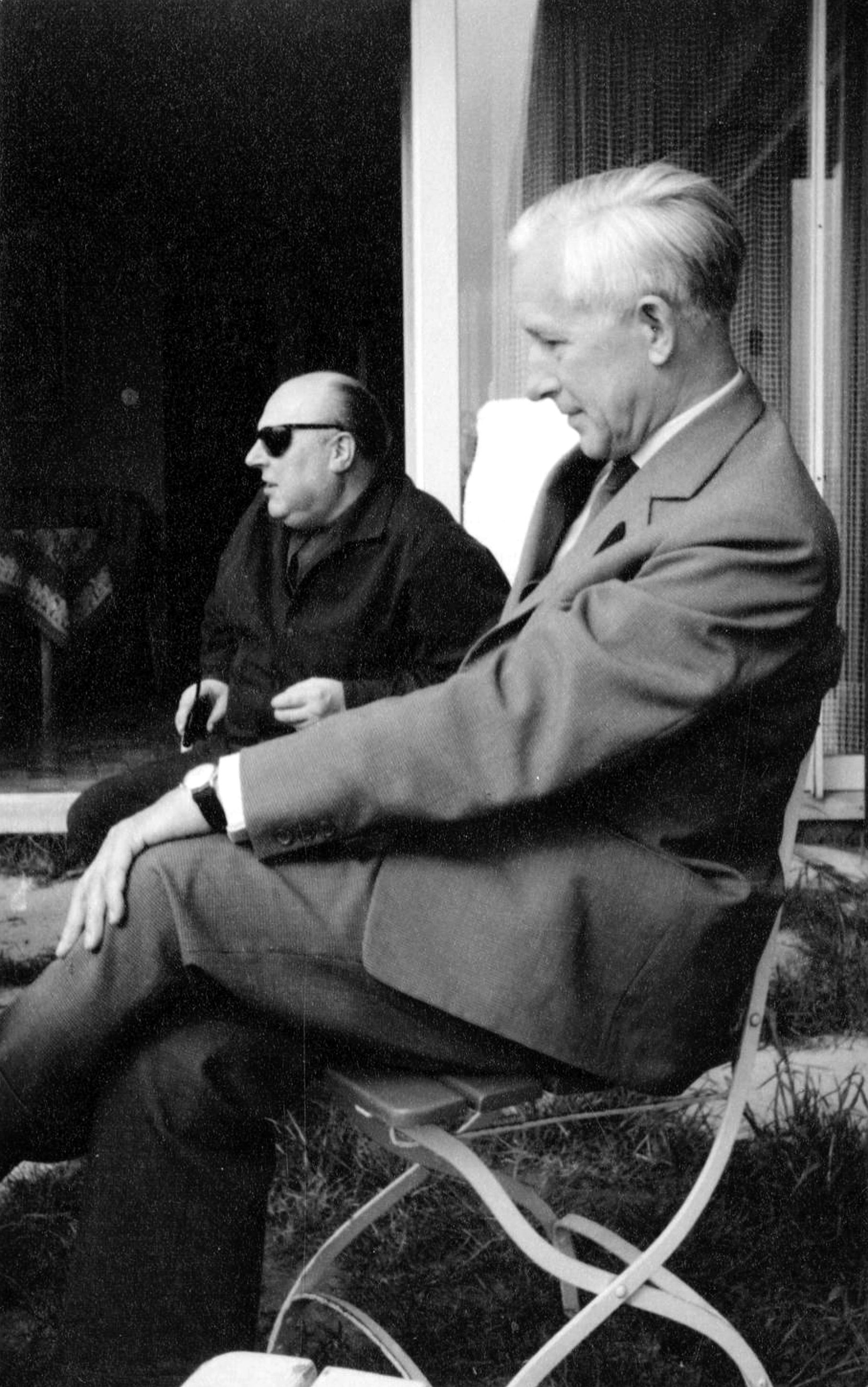 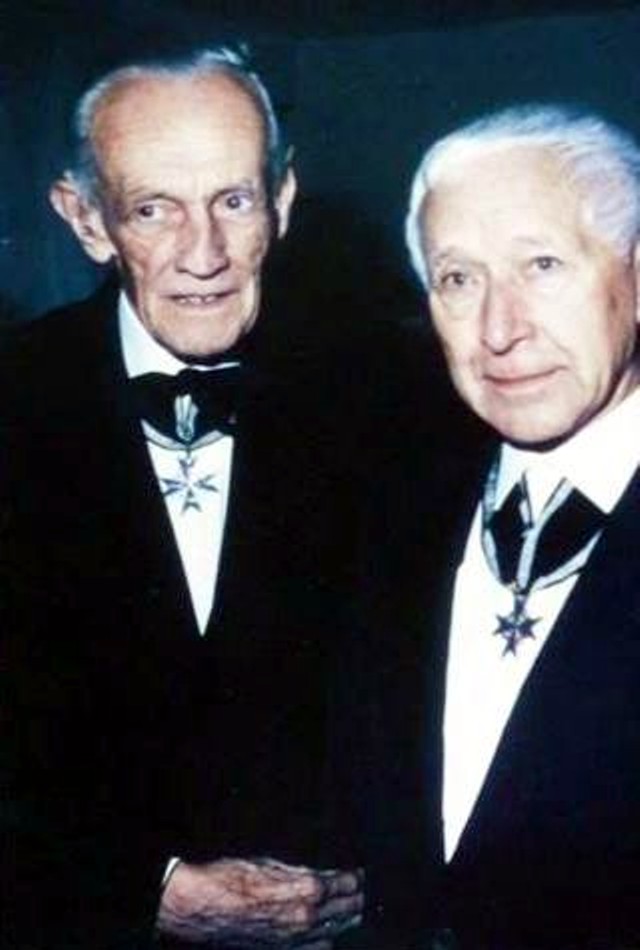 Otto von der Linde and Ernst Jünger, the last living knights of the Pour le Mérite, as guests of honour of the AKCR in 1982.

Jünger attended school from 1901 to 1913, and was a member of the Wandervogel movement. In 1913, he ran away from home to join the French Foreign Legion in which he served very briefly in North Africa. During World War I he served with distinction in the Imperial German Army on the Western Front. In the first week of January 1917 he was awarded the Iron Cross First Class and in September 1918 was awarded Prussia's highest military decoration of that time, the Pour le Mérite (informally known as the "Blue Max"). This he received as a Lieutenant at the age of 23.

His war experiences are first described in Storm of Steel (German title: In Stahlgewittern) which was published in 1920 (self-published). This book by which Jünger became suddenly famous has been seen as glorifying war. Jünger served as a lieutenant in the army of the Weimar Republic until his demobilisation in 1923. He studied marine biology, zoology, botany, and philosophy, and became a well-known entomologist.

In the 1920s Jünger published articles in several right-wing nationalist journals, and further novels. As in Storm of Steel, in the book Feuer und Blut (1925, "Fire and Blood"), Jünger glorified war as an internal event. According to Jünger, war elevates the soldier's life, isolated from normal humanity, into a mystical experience. The extremities of modern military techniques tested the capacity of the human senses. He criticized the fragile and unstable democracy of the Weimar Republic, stating that he "hated democracy like the plague."

Although never a member of the National Socialist movement around Adolf Hitler, Jünger never publicly criticized the regime before the war. Jünger however refused a chair offered to him in the Reichstag following the Nazi Party's ascension to power in 1933, and he refused the invitation to head the German Academy of Literature (Die deutsche Akademie der Dichtung). Even though he never endorsed the Nazi Party, and indeed kept them at a careful distance, Jünger's Storm of Steel sold well into the six-figure range by the end of the 1930s. In the essay On Pain, written and published in 1934, Jünger rejects the liberal values of liberty, security, ease, and comfort, and seeks instead the measure of man in the capacity to withstand pain and sacrifice.

In 1927 he moved to Berlin. In 1929 his work The Adventurous Heart (German title: Das abenteuerliche Herz) was published. In Über Nationalismus und Judenfrage (1930, "On Nationalism and the Jewish Question"), Jünger describes Jews as a threat for the unity of Germans. In 1932 he published The Worker (German title: Der Arbeiter), which called for the creation of a totally mobilized society run by warrior-worker-scholars. Jünger left Berlin in 1933, his house was searched by the Gestapo secret police, and from 1938 he was banned by the Nazis from writing. On the Marble Cliffs (1939, German title: Auf den Marmorklippen) uses metaphor to describe Jünger's negative perceptions of the situation in Hitler's Germany. He served in World War II as an army captain. Assigned to an administrative position in Paris, he socialized with prominent artists of the day such as Picasso and Jean Cocteau. His early time in France is described in his diary Gärten und Straßen (1942, Gardens and Streets).

Jünger appears on the fringes of the Stauffenberg bomb plot. He seems to have been an inspiration to anti-Hitler conservatives in the German Army, and while in Paris he was close to the old, mostly Prussian officers who carried out the revolt against Hitler. He was only peripherally, if at all, involved in the events however, and in the aftermath was honorably discharged from the army in the summer of 1944.

After the war, Jünger was initially under some suspicion for his nationalist past, and he was banned from publishing in Germany for four years by the British occupying forces because he refused to submit to the degrading denazification procedures. His work The Peace (German title: Der Friede), written in 1943 and published abroad in 1947, marked the end of his involvement in politics. Rehabilitated by the 1950s, he went on to be regarded as a towering figure of German literature. German publisher Klett put out a ten-volume Collected Works (Sämtliche Werke) in 1965.

The same publishers issued a second edition in 1983, turning Jünger into one of four German authors who lived to see two editions of his Collected Works published; the other three are Goethe, Klopstock, and Wieland. He remained highly controversial, though, in the eyes of the German Marxist Left, both for his past, and his ongoing role as conservative philosopher and icon. Jünger was immensely popular in France, where at one time 48 of his translated books were in print. In 1984, he spoke at the Verdun memorial, alongside with his admirers, French president François Mitterrand and German chancellor Helmut Kohl.

His diaries from 1939 to 1949 were published under the title Strahlungen (1948, Reflections). In the 1950s and 1960s Jünger travelled extensively. He continued writing prodigiously for his entire life, publishing more than 50 books.

Jünger was among the forerunners of magical realism. His vision in The Glass Bees (1957, German title: Gläserne Bienen), of a future in which an overmechanized world threatens individualism, could be seen as science fiction. A sensitive poet with training in botany and zoology, as well as a soldier, his works in general are infused with tremendous details of the natural world. His critics claim there is an excess of emotional control and precision in his writing. In 1981 he was awarded the Prix mondial Cino Del Duca.

Throughout his whole life he had experimented with drugs such as ether, cocaine, and hashish; and later in life he used mescaline and LSD. These experiments were recorded comprehensively in Annäherungen (1970, Approaches). The novel Besuch auf Godenholm (1952, Visit to Godenholm) is clearly influenced by his early experiments with mescaline and LSD. He met several times with LSD inventor Albert Hofmann and they took LSD together. Hofmann's memoir LSD, My Problem Child describes some of these meetings.

One of his most important literary contributions was the metahistoric figure of the Anarch (sovereign individual), which evolved from his earlier conception of the Waldgaenger, or Forest Fleer. The anarch is Jünger's answer to the question of survival of individual freedom in a totalitarian world. It is developed primarily through the character of Martin Venator in his novel Eumeswil.

Jünger was a friend of Martin Heidegger. Jünger was admired by Julius Evola who published a book called L'Operaio nel pensiero di Ernst Juenger (1960), in which he summarized The Worker.

Despite the controversy surrounding his life, Jünger said he never regretted anything he wrote, nor would he ever take it back.

Yet he joined Chancellor Helmut Kohl and President François Mitterrand of France at a 1984 Franco-German ceremony at Verdun, France. Jünger's 100th birthday on 29 March 1995, was met with praise from many quarters, including the socialist president Mitterrand.

A year before his death, Protestant Jünger converted to Catholicism and began to receive the Sacraments. He died on 17 February 1998 in a klinic in Riedlingen, Upper Swabia, the last living bearer of the military version of the order of the Pour le Mérite. Over 2,000 mourners from around the world traveled to Wilfingen, where he was buried. Erwin Teufel, prime minister of Baden-Württemberg, was among them, also a representative of the German gouvernment in Bonn and five generals of the Bundeswehr.

Ernst Jünger was born in Heidelberg as the eldest of six children of the chemical engineer Ernst Georg Jünger (1868–1943) and of Karoline Lampl (1873–1950). Two of his siblings died as infants. His father acquired some wealth in potash mining. His brother Friedrich Georg Jünger (1898–1977) was a poet and essayist.

He married Gretha von Jeinsen (1906–1960) in 1925; they had two children, Ernst "Ernstel" (1926–1944) and Alexander (1934–1993). His elder son Ernst, 1944 a Kriegsmarine cadet (Marine-Flak-Abteilung 232), was imprisoned that year for engaging in "subversive discussions" in his Wilhelmshaven Naval Academy. Transferred to Penal Unit 999th Light Afrika Division, he fell (⚔) near Carrara in occupied Italy on 29 November 1944 combating partisans (Bandenbekämpfung). Jünger's first wife died in 1960, and in 1962 he married Liselotte Lohrer. His younger son Alexander, a physician, committed suicide in 1993.

Julius Evola pointed out in his autobiography The Path of Cinnabar (Excerpt online: "Junger: From 'Conservative Revolutionary' to Sluggishly Liberal & Humanistic") the negative transformation in philosophical thought which Ernst Junger had undergone after World War II:

"On the other hand, over the years Jünger has come to distance himself from the book I had introduced to the Italian public, and has abandoned his original views. While the most recent writing of Jünger has significantly contributed towards his fame as a writer and man of letters, on a spiritual level it reflects a lapse: both for its merely literary and aesthetic nature, and because it betrays the influence of ideas of a different, and often antithetical sort from the ones that inform The Worker and other early books of Jünger. It is as if the spiritual drive that Jünger had derived from his life in the trenches of the First World War, and applied on an intellectual level, had gradually run out. Besides, not only did Jünger play no significant role during the Second World War, but it also appears that, when in service in occupied France, he got in touch with those members of the Wehrmacht who in 1944 attempted to revolt against Hitler. Jünger, therefore, should be numbered among those individuals who first subscribed to 'Conservative Revolutionary' ideas but were later, in a way, traumatized by the National Socialist experience, to the point of being led to embrace the kind of sluggishly liberal and humanistic ideas which conformed to the dominant attempt 'to democratically reform' their country; individuals who have proven incapable of distinguishing the positive side of past ideas from the negative, and of remaining true to the former. Alas, this incapability to discern is, in a way, typical of contemporary Germany (the land of the 'economic miracle')."

More recently, Will Fredericks, in his article "The Conservative Revolution Then and Now: Ernst Junger" (link) has pointed out the following:

Jünger’s writings returned to the world of the civilian and the individual, to the preservation of freedom against totalitarianism. At least in this respect, the later Jünger seems to certainly help fulfill Sunic’s search for nonconformist weapons of dissent against today’s multicultural tyranny. The question I have is to what extent, if any, is Jünger’s later thinking representative of or supportive of traditionalism, let alone White nationalism. While he differentiates his Anarch figure from anarchism, it still seems to share certain basic characteristics of anarchistic thought which utterly oppose it to traditionalism or White nationalism. Indeed, Simon Friedrich, an expert on Jünger, characterized Jünger’s position as follows. “ALL external identifications, not excluding racial ones, are ultimately to be separated from”, leading a reader to ask: “So if we have to get rid of our identifications, what are we left with?” Jünger had become a radical individualist.

In addition he received countless other awards and honours. He received at least two honorary doctorates, was honorary citizen of at least three cities and honorary member of many academic societies.