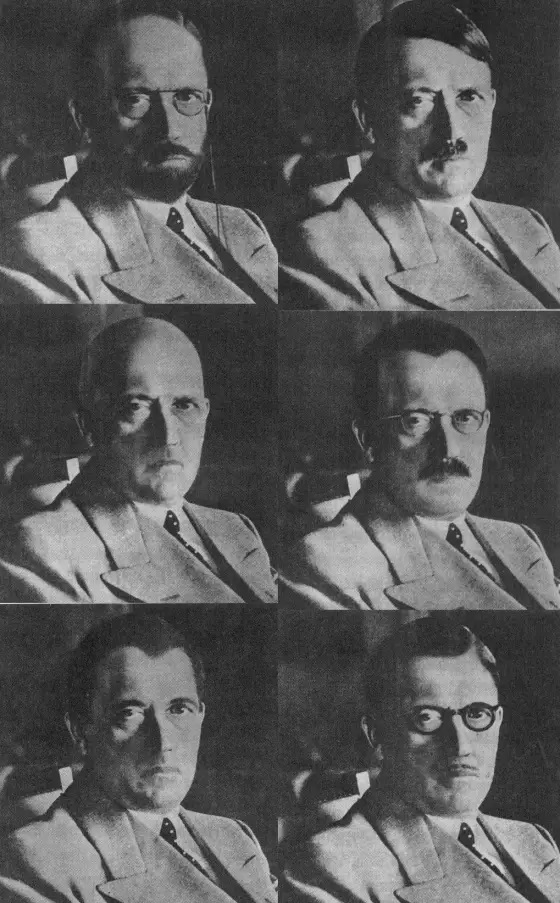 Photofits issued by the US Secret Service in 1944 predicting what Adolf Hitler could look like if disguised. Adolf Hitler's death in 1945 in Berlin is supported by many forms of evidence and is not disputed by, for example, Holocaust revisionists. Despite this, there have been some claims of Hitler surviving, with one theory claiming Hitler escaped to Argentina, sometimes claiming that Hitler there used the pseudonym "Father Krespi" or "Father Crespi".

Hitler heroically had before the start of the second world war connected his personal fate with the outcome this war[1]. Not only in words, but also in deeds: he committed suicide on April 30 1945, when the war was irrevocably lost. His suicide is also stated by authentic witnesses, who also lived in the Führerbunker, and it can therefore be considered as a fact of history. Despite this, rumours and theories that Hitler survived the war are widespread and popular. And there are many theories about what happened with Adolf Hitler after the fall of Berlin. These are all hoaxes; not based on the facts. Some of such rumours and theories say that Hitler escaped to continue the National Socialist struggle from a different country. A particular popular version is the theory that Adolf Hitler would have escaped during the fall of Berlin in 1945 and gone to Argentina.

Although official history contends Hitler committed suicide with his newlywed wife, Eva Braun, on 30 April 30 1945 and their corpses were burned by others in the Berlin bunker, Journalist-Historian Abel Basti claims proof the story is a fabrication. According to Basti's meticulous research, the leader of the Third Reich spent his last years as an art dealer and had facial plastic surgery to change his appearance. Those are just two of the astounding revelations that respected Argentine journalist and historian Abel Basti documents in his book, Hitler's Exile. The claim, that Hitler and some high-ranking Schutzstaffel officers escaped Germany and fled to South America, is not new.

Nil Nikandrov observes (Strategic Culture Foundation, "All the Leaders of the Third Reich Fled to Latin America"): "In his well-documented, The Hitler Survival Myth (1981), Donald McKale identifies the earliest source of the myth of Hitler's escape to the southern hemisphere as the unexpected surrender of a German U-boat in early July 1945 at Mar del Plata, Argentina.

"Several Buenos Aires newspapers, in defiance of Argentine Navy statements, said that rubber boats had been seen landing from it, and other submarines spotted in the area. On 16 July 16 1945, the Chicago Times carried a sensational article on the Hitlers having slipped off to Argentina. Ladislao Szabó, a Hungarian advertiser, witnessed the arrival of the U-530 and saw its crew disembarking. He had heard that the destination was the German Antarctica and, mistakenly, made a supposition that Hitler had escaped to Antarctica, and published the book Hitler está Vivo (Hitler is Alive), where he speaks about the possible location of Hitler, in Queen's Maud properties, opposite the Weddel Sea, that was then renamed Neuschwabenland (de), when the area was explored in 1938/39 by the German expedition [led] by Captain Ritschter. Zsabó made the wrong assumption. Had he read the book by Professor Hugo Fernandez Artucio published in 1940, Nazis en el Uruguay, (National Socialists in Uruguay) he would had discovered that there actually was a plan referring to German Antarctica, but this was nothing but the term they used for the Patagonia and that this information had been made public in New York in 1939."

When there's so much smoke there's usually a fire. Basti tracked down that fire during seven years of sometimes grueling investigations.He personally visited German compounds surrounded by security and stern-faced guards, interviewed surviving witnesses in villages near the strongholds, and even obtained authenticated photographs of Hitler and Braun during their exile years.

"Basti wrote that A. Hitler, E. Braun, and Führer's closest aides flew from the burning Berlin to Spain...and then crossed the Atlantic Ocean by three submarines and reached Argentina. In July-August, 1945 Hitler and his group landed in the Rio Negro province near the Caleta de los Loros village and moved on further into Argentine. Allegedly, the same secret route prepared by SS chief Himmler's staff was later used by Bormann, Mengele, and Eichmann. Basti detailed the journey of A. Hitler and E. Braun across Argentina assisted by local National Socialist sympathizers and described the couple’s family life during which—despite the hardships of hiding—they even had children."

The Soviets weren't helpful on the matter of the German leader's death.

"The Soviets continued to be difficult. They refused to allow Westerners into Berlin even after the surrender of Dönitz's government and the last armies in the field on May 7-9. On May 10, they announced the existence of the burned bodies in the Chancellory courtyard, but only allowed that one might be Hitler. The same report went on to say that his body might never be found. On June 6, a spokesman for the Soviet army in Berlin announced unequivocally that Hitler had committed suicide and that his body had been identified. Three days later, Marshall Zhukov, the head of the Soviet army gave a press conference with Deputy Foreign Minister Andrei Vishinski looking over his shoulder. 'We did not identify the body of Hitler,' he said. 'I can say nothing definite about his fate. He could have flown away from Berlin at the very last moment.'"

In an interview on Deadline - Live, an Argentine news program, journalist Santiago Romero interviewed Abel Basti about Hitler's escape, life in Patagonia, and the events that followed World War II.

Now a fragment of skull, believed for 64 years to have been from the remains of the Fuhrer, has been shown to be that of a woman aged between 20 and 40. It is a sinister thought but conspiracy theorists all over the world will be asking once more, if Hitler really died in his bunker. Historians have generally agreed since the end of the Second World War that, staring defeat in the face, an increasingly feeble and paranoid Hitler had married Eva Braun in the bowels of his Berlin bunker after midnight on 29 April 1945, and later dictated his will. His physician Werner Haase, in response to Hitler's questions, had recommended a dose of cyanide and a gunshot to the head as the most reliable form of suicide. Hitler, convinced of the treason of SS leader Heinrich Himmler, doubted the reliability of the SS-supplied cyanide tablets and had one tested on his dog Blondi, after which the dog died.

Following lunch on 30 April 1945, with Soviet forces less than 500 metres from the bunker, Hitler and Eva said goodbye to staff and fellow occupants, including the Goebbels family, private secretary Martin Bormann and military officers. They went into Hitler's personal study at 2.30pm and at around 3.30pm some witnesses reported hearing a loud gunshot. Those, including valet Heinz Linge, who went into the study reported the smell of almonds, consistent with cyanide gas. They said they saw Hitler slumped on his desk with a bullet wound to his head, a pistol on the floor and blood pooling on the arm of the sofa on which Eva lay beside him with no visible sign of injury. Several witnesses said the bodies were then carried up to the emergency exit and into a small bombed-out garden behind the Chancellery where they were doused with petrol and set alight, then buried in a small crater when the Soviet shelling made it unsafe for the cremation to continue. Seven and a half hours later, Red Army troops began storming the Chancellery and the remains of Hitler, his wife and two of his dogs were said to have been discovered in a shell crater by a Soviet soldier.

The Soviet story changed regularly in the aftermath of the fall of Berlin and in the following years. Conspiracy theorists point to suggestions that:

After the bodies were carried upstairs, Misch said: "Someone shouted to me, 'Hurry upstairs, they're burning the boss!' " But Misch decided not to go, in case the "last witnesses" were shot. He was later captured after fleeing the bunker and spent eight years in Soviet prison camps. Details of a Soviet autopsy on the remains they found, released years later, apparently showed gunshot wounds and cyanide poisoning. The remains were repeatedly buried and exhumed by Russian agents during their relocation from Berlin to a new facility at Magdeburg. There, they were put in an unmarked grave with the bodies of propaganda minister Joseph Goebbels, his wife and their six children.

When the facility was due to be handed over to the East German government in 1970, the KGB, it is said, exhumed all ten bodies, burned them and threw the ashes in the river Elbe to prevent the area becoming a National Socialist shrine. They kept Hitler's jaw and part of his skull — the fragment now thrown into doubt by US archaeologist Nick Bellantoni, who was given permission to examine the artefacts in the Russian state archive. Other discrepancies which have muddied the waters include a photo released by Soviets at the time of the fall of Berlin which purported to be the body of Hitler, shot in the forehead. It is now thought to be one of Hitler's body doubles.

Others who believe he escaped subscribe to a variety of conspiracy theories. The most popular include one or more of these elements: