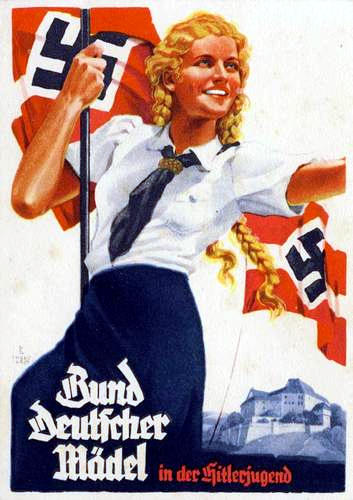 Advertisement poster for the BDM

The League of German Girls or League of German Maidens[1] (German: Bund Deutscher Mädel or BDM), was the girl's wing of the overall NSDAP youth movement, the Hitler Youth. It was the only female youth organization in National Socialist Germany.

At first, the League consisted of two sections: the Jungmädel, or Young Girls League, for girls ages 10 to 14, and the League proper for girls ages 14 to 18. In 1938, a third section was introduced, the Faith and Beauty Society (BDM-Werk Glaube und Schönheit), which was voluntary and open to girls between the ages of 17 and 21. For Young Ladys over 21 their were various organizations to join, the largest one being the National Socialist Women's League. 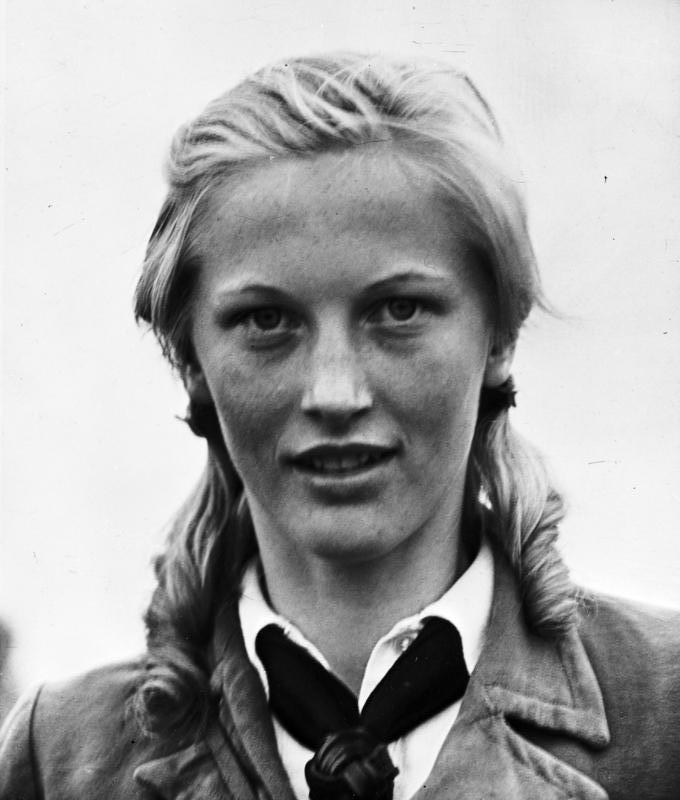 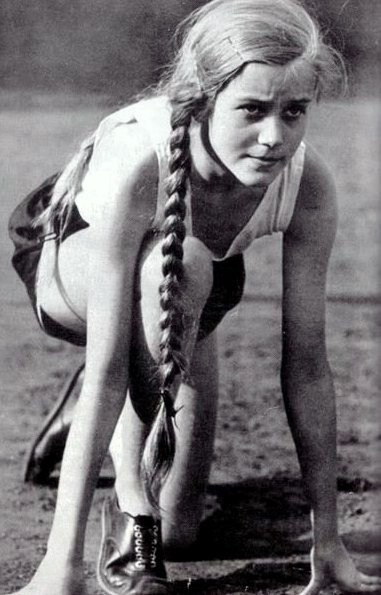 The Bund Deutscher Mädel had its origins already in the 1920s, in the first Mädchenschaften or Mädchengruppen, also known as Schwesternschaften der Hitler-Jugend (Sisterhood of the Hitler Youth). In 1930 it was founded as the female branch of the Hitler Youth movement.[2] Its full title was Bund Deutscher Mädel in der Hitler-Jugend (League of German Girls in the Hitler Youth). In the final electioneering campaigns of 1932, Hitler inaugurated it with a mass meeting featuring the League; on election eve, the League and Hitler Youth staged "evening of entertainment."[3] It did not attract a mass following until the National Socialists came to power in January 1933.

Baldur von Schirach was appointed Reichsjugendführer on 17 June 1933, and soon after his inauguration he decreeded regulations that suspended or forbade existing youth organizations ('concurrence'). Those youth groups were compulsorily integrated into the BDM; many of them closed down to avoid this. These National Socialist activities were a part of the political conformity starting in 1933.

The Reichskonkordat between the catholic church and National Socialist Germany - signed on July 20, 1933 - gave a certain shelter to the catholic youth ministry, but they were object of much bullying.

The „Gesetz über die Hitlerjugend“ (law about the HJ) dated 1. december 1936 forced all eligible juveniles to be a member of HJ or BdM. Members had to be ethnic Germans, German citizens, and free of hereditary diseases.[4] Girls had to be 10 years of age to enter this League.

After Mohr married in 1937, she was required to resign her position (the BDM required members to be unmarried and without children in order to remain in leadership positions), and was succeeded by Dr. Jutta Rüdiger, a doctor of psychology from Düsseldorf, who was a more assertive leader than Mohr but nevertheless a close ally of Schirach, and also of his successor from 1940 as HJ leader, Artur Axmann. She joined Schirach in resisting efforts by the head of the NS-Frauenschaft (National Socialist Woman's League), Gertrud Scholtz-Klink, to gain control of the BDM. Rüdiger led the BDM until its dissolution in 1945.[5]

As in the HJ, separate sections of the BDM existed, according to the age of participants. Girls between the ages of 10 and 14 years old were members of the Young Girl's League (Jungmädelbund, JM), and girls between the ages of 14 and 18 were members of the Bund Deutscher Mädel (BDM) proper.[6] In 1938, a third section was added, known as Faith and Beauty (Glaube und Schönheit), which was voluntary and open to girls between 17 and 21 and was intended to groom them for marriage, domestic life, and future career goals. Ideally, girls were to be married and have children once they were of age, but importance was also placed on job training and education.

At the beginning of world war II, the Reichsarbeitsdienst became compulsory also for young women. It lasted half a year. Many young women became 'Blitzmädel' (Wehrmachthelferin) during world war II.

While these ages are general guidelines, there were exceptions for members holding higher (salaried) leadership positions, starting at the organizational level of "Untergau". As regards lower (honorary) positions, even members of the JM could apply for them after two years of membership and would then obtain such a position typically at the age of 13. The higher leadership, however, was recruited from members over 18 and was expected to maintain salaried office for no more than 10 years, and to leave the BDM at the age of 30 by the latest.[7] As a general rule, members had to leave when they married and especially when they had children.

Jutta Rüdiger (b. 1910) was a special case.[8] She joined the BDM only in 1933, at the age of 23 and after having finished her doctorate. She obtained honorary positions instantly in 1933 and early 1934, was promoted to her first salaried position (leader of Untergau) in June 1935 and was appointed Reichsreferentin for the BDM (head of the BDM) in November 1937, at the age of 27, keeping this position even until the German defeat, when she had reached the age of 34. Clementine zu Castell-Rüdenhausen (b. 1912), a countess and member of the higher Franconian aristocracy, was appointed lead of Gau Unterfranken in 1933, at the age of 21, which also seems to have been the age when she joined the BDM, as no earlier date of membership nor any previous lower positions are recorded in her case.

She was appointed head of "Faith and Beauty" in January 1938, a few days before her 26 birthday, and was discharged in September 1939 because of her marriage with Wilhelm "Utz" Utermann in October 1939. She was followed by an Austrian member, Annemarie Kaspar (b. 1917), who had been appointed Untergauführerin at the age of 20 in March 1938 and became head of B&B two weeks before her 22nd birthday. She too married and was discharged in May 1941, to be replaced in June 1941 by Martha Middendorf (b. 1914), who was 27 at the time of her appointment and was discharged already in February 1942, as she too had married. From this time on, Jutta Rüdiger, who was no candidate for marriage but living in live-long partnership with her comrade Hedy Böhmer, took over to lead the B&B directly, thus holding both leadership positions until 1945.

Badges of the Bund Deutscher Mädel

The BDM used campfire romanticism, summer camps, folklorism, tradition, and sport to educate girls within the National Socialist belief system, and to train them for their roles in German society: wife, mother, and homemaker.[9] Their Home Evenings revolved about domestic training, but Saturdays involved strenuous outdoor training.[10] This was praised as ensuring health, which would enable them to serve their Volk and country.[11] The "home evenings"—ideally to be conducted in specially built homes—also included world view training, with instruction in history.[12] This would include learning the Horst Wessel song, the National Socialist holidays, about Hitler Youth martyrs, and facts about their locality and Germans throughout the world.[13] Physical educations included running, the long jump, somersaulting, tightrope walking, rout-marching, and swimming.[13] The importance of self-sacrifice for Germany was heavily emphasized; a Jewish woman, reflecting on her longing to join the League of German Girls, concluded that it had been the admonishment for self-sacrifice that had drawn her most.[14] The League was particularly regarded as instructing girls to avoid Rassenschande or racial defilement, which was treated with particular importance for young females.[15]

Holiday trips offered by HJ and BdM - i.e. skiing in winter and tent camps in summer - were affordable; children from poor families got subsidies. These offers were popular. [16]

The League encouraged rebellion against parents.[17] Der Giftpilz presented the story of a German girl being ordered to visit a Jewish doctor by her mother; the girl protested on the grounds of what she had learned at BDM meetings, and while at the office, remembered the warnings in time to escape being molested by the doctor.[18] This caused her mother to agree that the BDM had clearly been in the right.[18]

Ilsa McKee noted that the lectures of Hitler Youth and the BDM on the need to produce more children produced several illegitimate children, which neither the mothers nor the possible fathers regarded as problematic.[19] These and other behaviors taught led parents to complain that their authority was being undermined. In 1944, a group of parents complained to the court that the leaders of the League were openly telling their daughters to have illegitimate children.[20] Public opinion attributed a great deal of sexual laxity to the members.[21]

The preparation camps for the Landdienst of girls and boys often lay nearby. 900 of the girls participating in the 1936 Reichsparteitag in Nürnberg came back pregnant. In 1937, a prohibition came out saying that camping was forbidden to the BdM.[22]

Jungmadel were only taught, the BDM was involved in community service, political activities and other activities being considered as useful at that time.[23]

Before entering any occupation or advanced studies, the girls, like the boys in Hitler Youth, had to complete a year of land service ("Landfrauenjahr").[24] Although working on a farm was not the only approved form of service, it was a common one; the aim was to bring young people back from the cities, in the hope that they would then stay "on the land" in service of National Socialist blood and soil beliefs.[25] Another form of service was as a domestic work in a family with many children.[26]

The 'Faith and Beauty' organizations offered groups where girls could receive further education and training in fields that interested them. Some of the works groups that were available were arts and sculpture, clothing design and sewing, general home economics, and music.[13]

Das deutsche Mädel was the National Socialist magazine directed at these girls.[27] 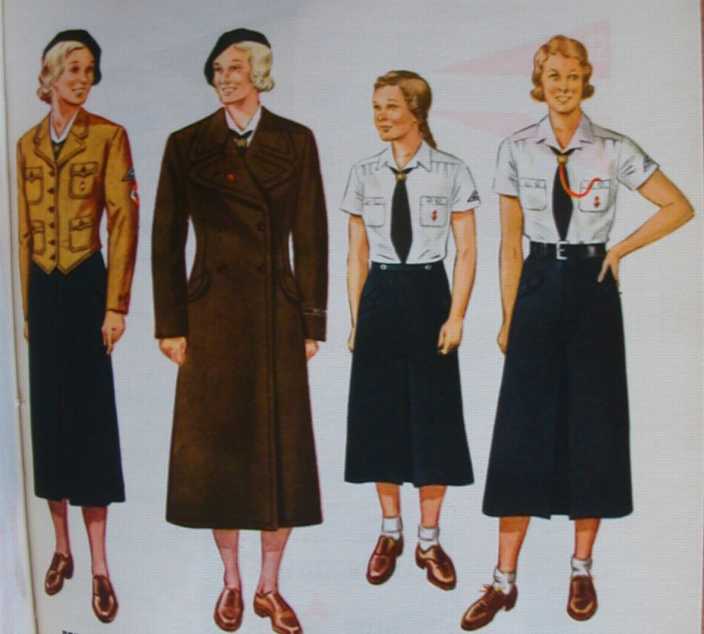 Uniforms of the BDM

The outbreak of war altered the role of the BDM, though not as radically as it did the role of the boys in the HJ, who were to be fed into the German Wehrmacht (armed forces) or the National Labor Service (Reichsarbeitsdienst, RAD, six months) as soon as they turned 18. The BDM helped the war effort in many ways. Younger girls collected donations of money, as well as goods such as clothing or old newspapers for the Winter Relief and other National Socialist charitable organizations. Many groups, particularly BDM choirs and musical groups, visited wounded soldiers at hospitals or sent care packages to the front.

The older girls volunteered as nurses' aides at hospitals, or to help at train stations where wounded soldiers or refugees needed a hand. After 1943, as Allied air attacks on German cities increased, many BDM girls went into paramilitary and military services ("Wehrmachthelferin") where they served as anti-aircraft Flakhelfer, signals auxiliaries, searchlight operators, and office staff. Unlike male HJs, BDM girls took little part in the actual fighting or operation of weaponry, although some Flak Helferinnen operated anti-aircraft guns.

By 1944, the drafting of boys resulted in most of the "land service" help with the harvest was performed by girls.[24]

In the last days of the war, some BDM girls, just like some boys of the male Hitler Youth (although not nearly as many), joined with the Volkssturm (the last-ditch defense) in Berlin and other cities in fighting the invading Allied armies, especially the Russians. Officially, this was not sanctioned by the BDM's leadership which opposed an armed use of its girls even though some BDM leaders had received training in the use of hand-held weapons (about 200 leaders went on a shooting course which was to be used for self-defense purposes). After the war, Dr. Jutta Rüdiger denied that she had approved BDM girls using weapons.

Some BDM girls were recruited into the Werwolf groups which were intended to wage guerrilla war in Allied-occupied areas. A former BDM leader, Ilse Hirsch, was part of the team who assassinated Franz Oppenhoff, the Allied-appointed mayor of Aachen, in March 1945.[29]

By the time they joined the Red Cross, Wehrmacht as Luftwaffe Helferinnen, Volkssturm or Werwolf, they were no longer BDM members, but members of those respective organizations.

In some places allied atrocities were noticed in form of Russian and Polish male visiting BDM camps, raping and murdering the young Girls and children.

The 'Kontrollratsgesetz Nr. 2' (enacted 10 October 1945) by the Allied Control Council forbade the NSDAP and all its sub-organizations, including the BDM. Their properties were confiscated.