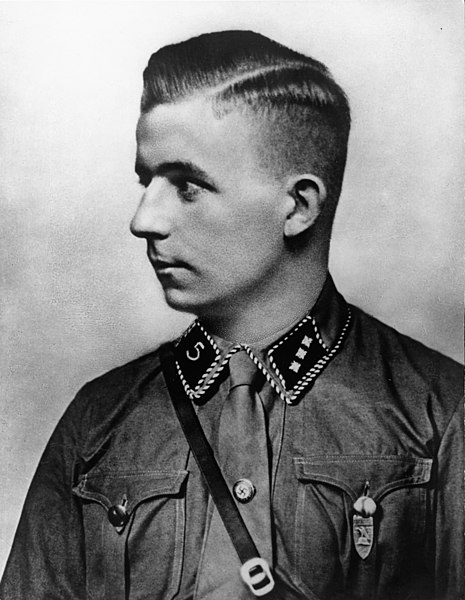 Horst Ludwig Georg Erich Wessel (9 October 1907 – 23 February 1930), commonly known as Horst Wessel, was a Berlin leader of the NSDAP's Sturmabteilung (SA), who was killed by Communists and became a National Socialist martyr.

A march he had written the lyrics to was renamed the "Horst-Wessel-Lied" ("Horst Wessel Song"), and became the official anthem of the NSDAP and the co-national anthem of National Socialist Germany.

After WWII, the lyrics and tune of his song were made illegal in Germany, his memorial was vandalized, and his gravestone and remains have been destroyed. The grave of Wessel's father has been leveled as well.

Raise the flag! The ranks tightly closed! The Sturmabteilung marches with calm, steady step. Comrades shot by the Red Front and reactionaries March in spirit within our ranks

For the last time, the call to arms is sounded! For the fight, we all stand prepared! Already Hitler's banners fly over all streets. The time of bondage will last but a little while now!

Raise the flag! The ranks tightly closed! The SA march with quiet, steady step. Comrades shot by the Red Front and reactionaries, March in spirit within our ranks.

Part of this article consists of modified text from Wikipedia, and the article is therefore licensed under GFDL.
Retrieved from "http://en.metapedia.org/m/index.php?title=Horst_Wessel&oldid=453379"
Categories: