The Wrangel family was of the Baltic German nobility. Sometime in the 13th century a German knight set out from his family domain in Lower Saxony and headed east to join the Teutonic Knights. He was probably from the Lewenwolde family of Velzen, whose coat of arms is identical to that of the Baltic Wrangels. In his feudal and conqueror's census, Liber Census Daniae, taken by the Danish King Waldemar II, there is mention of a Dominus (Lord) Eilardus, Lord of a village called Uvarangele. The Danes were soon driven out. The first real mention of a Wrangel is in a document dated 1277: Dominus Henricus de Wrangel, and it is assumed that this knight took his name from his fiefdom. By 1561 the family held seven feudal lordships, the second-largest feudal estate in the Baltic. After those territories were invaded by Sweden, a census made in 1681 revealed the Wrangels to be the most powerful family, with fourteen lordships, twice as many as the next richest family.[1]

Pyotr (Peter) Wrangel was born on August 28, 1878 in Mukuliai, in the Kovno Government of the Russian Empire (near present-day Zarasai, Lithuania), the youngest of three brothers, to Baron Nicholas Wrangel (b.1847) and his wife Maria. He was a retired officer, and rich landowner, who sat on the board of several coal companies.[2] There was a distant relationship to the famed Arctic explorer Ferdinand von Wrangel.

After graduating from the Rostov-on-Don Technical High School in 1896, and the Institute of Mining Engineering in St. Petersburg in 1901, Wrangel entered the army on September 13, 1901, and was made sergeant by March 1902, and was an officer candidate on July 15, 1902. He then took the required examinations for a permanent commission in the prestigious Life Guards cavalry and subsequently graduated from the Nikolaev Cavalry School. He soon resigned his commission, and travelled to Irkutsk to become an engineer but where he was soon assigned to special missions by the provincial Governor-General.[3]

At the start of the Russo-Japanese War in 1904, he voluntarily re-enlisted and was assigned to the 5th Squadron of the 2nd Argun Cossack Regiment (part of the Trans-Baikal Cossacks).[4] In December 1904, he was promoted to the rank of lieutenant. After the war ended, he was reassigned, with a further promotion to Captain, to the 55th Finnish Dragoon Regiment, which participated in the expedition against revolutionaries under General A.N. Orlov in the Baltic region. In 1907, he returned to the Life Guards Cavalry Regiment. Wrangel then underwent further studies and graduated from the Mykolayiv Imperial General Staff Academy in 1910 and the Cavalry Officers' School in 1911.

With the start of World War I, Wrangel was assigned command of a cavalry squadron. On October 13, 1914 he became one of the first Russian officers to be awarded the Order of St. George (4th degree) in the war—the highest military decoration of the Russian Empire. In December 1914, he was promoted to the rank of colonel. In October 1915 Wrangel was transferred to the South-western Front and was appointed commander of the 1st Regiment of the Trans-baikal Cossacks. This unit was very active in Galicia against the Austrians, and Wrangel distinguished himself especially during the Brusilov Offensive. He was promoted to the rank of major general in January 1917, and took command of the 2nd Brigade of the Ussuri Cavalry Division, which was merged with other cavalry units to become the Consolidated Cavalry Corps in July of the same year. He was further decorated with the George Cross (4th degree) for his defense of the Zbruch River in the summer of 1917.

Following the end of Russia's participation in the war, Wrangel resigned his commission and went to live at his dacha at Yalta in the Crimea. Arrested by the Bolsheviks at the end of 1917, he was released, and escaped to Kiev, where he joined Pavlo Skoropadskyi's Ukrainian 'State'. However, it was soon apparent to him that the new government existed only through the waning support of Germany, and in August 1918, he joined the anti-Bolshevik Volunteer Army based at Yekaterinodar, where he was given command of the 1st Cavalry Division and the rank of Lieutenant-General in the White Army. After the Second Kuban Campaign in late 1918, he was promoted to Major-General, and his Division was raised to that of a army corps. An aggressive commander, he won a number of victories in the north Caucasus. From January 1919, his military force was renamed the Caucasus Volunteer Army. Wrangel soon clashed politically with General Anton Denekin's forces of South Russia, who was demanding a quick march on Moscow. Wrangel insisted instead that his forces should take Tsaritsyn (later Stalingrad) first, to join up with the army of Admiral Aleksandr Kolchak, which he accomplished on June 30, 1919 after three previous attempts by General Pyotr Krasnov had failed in 1918. He gained a reputation as a skilled and just administrator, who, in contrast to some other White Army generals, did not tolerate lawlessness or looting by his troops.[5] However, at the insistence of Denikin, he was unable to join forces with Admiral Kolchak and led his forces north instead towards Moscow. In November 1919. Continued disagreement with Denikin led to his removal from command, and Wrangel departed for exile to Constantinople of February 8, 1920.

However, on March 20, 1920, Denikin was forced to resign, and a military committee led by General Abram Dragomirov in Sevastopol asked that Wrangel return as Commander-in-Chief of the White forces in Crimea. He assumed the post on April 4, 1920 and put forth a coalition government which attempted to institute sweeping reforms (including land reforms).[6] He also recognized and established relations with the new (and short lived) anti-Bolshevik independent republics of Ukraine and Georgia, among others. However, by this stage in the Russian Civil War, such measures were too late, and the White movement was rapidly losing support both domestically and, more importantly, from overseas. 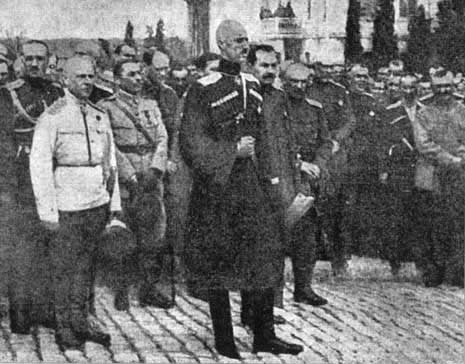 At a prayer vigil upon accepting command.

After defeats in which he lost half his standing army, and facing defeat in Northern Tavria and the Crimea, Wrangel organized a mass evacuation on the shores of the Black Sea.[7] Wrangel gave every officer, soldier, and civilian a free choice: evacuate and go with him into the unknown, or remain in Russia and face certain death at the hands of the Red Army. The last military and civilian personnel left Russia with Wrangel onboard the General Kornilov on November 14, 1920.

Initially, Wrangel lived on his yacht Lucullus at Constantinople, which was later rammed and sunk by the Italian steamer Adria, which had sailed from Soviet-held Batum. Wrangel, who was on shore that the time, escaped with his life in what was widely regarded as an assassination attempt.

Wrangel then journeyed with his staff via Turkey and Tunisia to the Kingdom of Serbs, Croats and Slovenes as the head of all Russian refugees, and arguably became the most prominent of all exiled White emigres. In 1924, he established the Russian All-Military Union, an organization established to fight for the preservation and unity of all White forces living abroad. He settled in Brussels, Belgium from September 1927 and worked as a mining engineer. Wrangel's memoirs were published in the magazine White Cause (Белое дело) in Berlin in 1928.

Wrangel died suddenly in 1928, and Wrangel's family believed that he had been poisoned by his butler's brother, who lived in the Wrangel household in Brussels briefly and who was allegedly a Soviet agent[citation needed]. Wrangel's funeral and burial took place in Brussels, but he was reinterred on October 6, 1929 in the Holy Trinity Russian Orthodox church in Belgrade, Serbia according to his wishes[citation needed].

The town of Sremski Karlovci, which served as his headquarters and was at the time of his death the location of the Holy Synod of the Russian Orthodox Church Abroad, together with the Russian Ministry of Culture erected a monument in his honour. 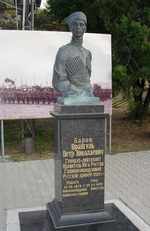 Statue of Wrangel in Sremski Karlovci