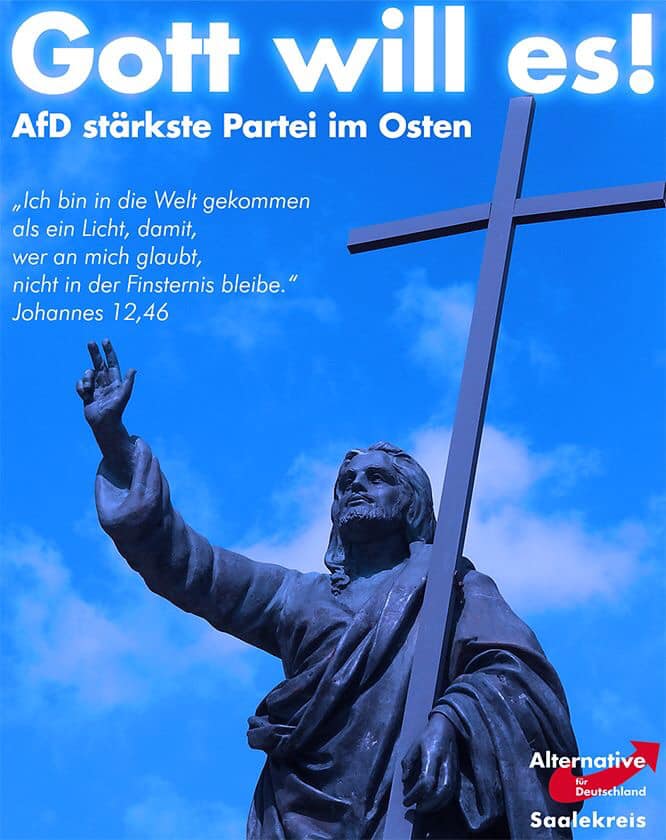 Alternative for Germany (German: Alternative für Deutschland, AfD) is a traditionalist conservative political party in Germany. It is today the biggest opposition party in the Bundestag national parliament, which it entered in 2017 propelled by voters angry at Chancellor Angela Merkel's decision in 2015 to admit almost one million mainly Muslim "asylum seekers". The AfD also sits on opposition benches in all of Germany's 16 state parliaments, where it is ostracised by all the Liberal-Left parties, including Merkel's Christian Democrats (CDU) and the Social Democrats (SPD). Europe's Liberal-Left mainstream media continually smear the party as "Far-Right"....

They call us Nazis, fascists and right-wing terrorists. But we need to be wise and resilient. The day will come when a weakened CDU has only one option: us!

Founded in April 2013, the AfD narrowly missed the 5% electoral threshold to sit in the Bundestag during the 2013 Federal election. The following year the party won seven seats in the EU elections as members of the European Conservatives and Reformists. After securing representation in 14 of the 16 German State Parliaments by October 2017, the AfD became the third-largest party in Germany following the 2017 Federal Elections, with 94 seats in the Bundestag, a major breakthrough for the party.[1]

In October 2019 in the Thuringia State elections Alternative für Deutschland gained 23.4% of the vote against 22% for the Christian Democrats (CDU). The AfD more than doubled its vote, from 10.6% five years ago. The Far-Left quasi-Communist Die Linke party, part of Thuringia's ruling coalition, won the state election with just over 30%. The Thuringia AfD is led by Björn Höcke, 47, who heads a stridently nationalist group called Flügel and has been accused by the broad Left of inflammatory rhetoric: he once deplored central Berlin's Holocaust memorial as a "monument of shame". During the campaign, his desperate CDU rival in Thuringia, Mike Mohring, called him a "Nazi". The result in Thuringia is seen as a significant setback for the central government.[2]

The party is Euro-sceptic, and is opposed to alien immigration, particularly Islamic, into not just Germany but Europe-wide. It has links with other parties and traditionalist groups across Europe and in this respect held a four-day conference in Berlin at the beginning of April 2019 on the subject of "Preserving European Civilisation, Culture and Values" which attracted delegates from numerous countries.

The party has, from December 2019, co-Leaders Tino Chrupalla, a lawmaker from Saxony and Joerg Meuthen, an economics Professor from the industrial southern state of Baden-Wuerttemberg[3].

AfD's Armin-Paulus Hampel addresses the annual conference of the Traditional Britain Group in London in October 2018.